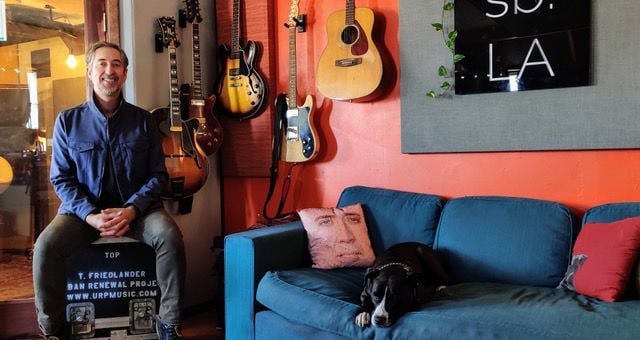 Skagit County native Tim Friedlander is shown at soundBOX:LA, one of his five recording studios in the Los Angeles area. 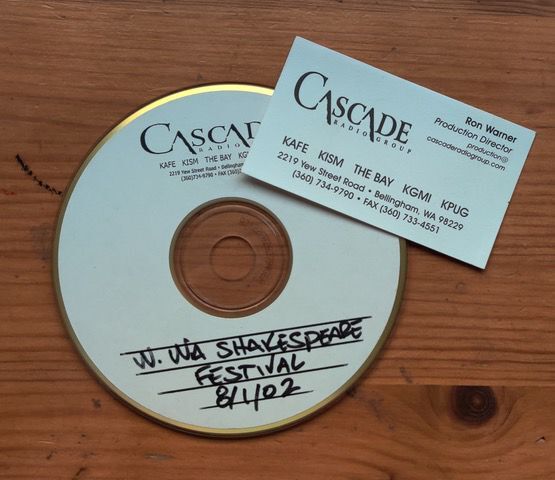 A CD of one of Tim Friedlander’s first voice acting jobs, for the Cascade Radio Group in Bellingham in 2002. 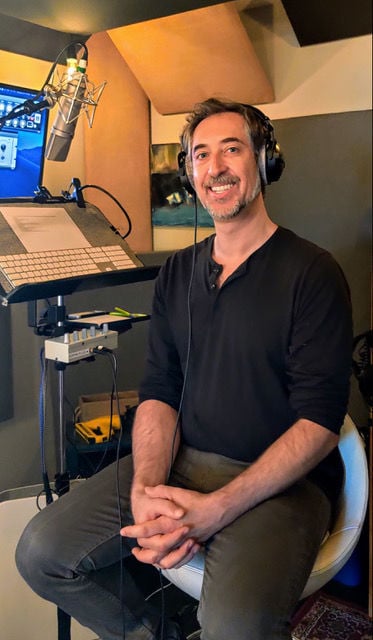 Tim Friedlander prepares to record during a session at one of his five studios in Los Angeles.

Skagit County native Tim Friedlander is shown at soundBOX:LA, one of his five recording studios in the Los Angeles area.

A CD of one of Tim Friedlander’s first voice acting jobs, for the Cascade Radio Group in Bellingham in 2002.

Tim Friedlander prepares to record during a session at one of his five studios in Los Angeles.

Voice acting might be initially overlooked when it comes to entertainment, but the character of a production can be completely changed by the voices attached to it.

(For an insightful, wry, comic look at the industry, put the movie “In a World” on your to-rent list.)

Tim Friedlander, a Skagit County native and graduate of Western Washington University, is one of those voices you may have heard — a lot.

The 46-year-old Friedlander founded and runs five voice studios in the Los Angeles area and one in Colorado. He’s a 1992 graduate of Mount Vernon High School and has been in Los Angeles since 2002.

His busy schedule is divided these days, Friedlander said, between his in-demand voice work and running his studios.

Even on a phone call, Friedlander has one of those voices that seems to test the limits of cellphone technology — projecting enthusiasm and verve without relying only on raw volume.

Those attributes have served Friedlander well in his profession. He’s appeared in hundreds of recordings from video games to political ads to all kinds of promotions.

As if that weren’t enough, Friedlander has a masters in music education, has taught music for many years and plays guitar in The Urban Renewal Project, a 12- to 16-musician collective described on its website as “Brass. Bars. Beats. Original soul and hip-hop big band from L.A.”

The roots of Friedlander’s work go back decades.

“I actually started training up at Western in 1996,” he said. “I took my first voice-over lessons with some instructors in Seattle, and kind of — off and on — explored voice-overs over the years.

“I taught music in the private schools in L.A. for 10 years, and during all that time I was kind of pursuing voice-over a little bit. I went back to grad school in 2014, and at the same time I was exploring voice-over more professionally. Then in 2016 I went full time into voice-over.”

Much of what turned into his profession stems from his family, Friedlander said.

His father Andy taught drama at Skagit Valley College for 26 years before retiring in 2010, and plays guitar in Prozac Mtn Boys, a longtime local bluegrass band. His mother plays piano, and his grandfather and uncles are musicians or “artists of some kind. It definitely runs in the family, on that side,” Friedlander said.

The recognition Friedlander has earned for his work is impressive. Among the most recent accolades were two nominations for the SOVAS (Society of Voice Arts and Sciences) Voice Arts Awards, which were held Dec. 20.

Friedlander didn’t collect a win this time around, but he did add to his cache of eight nominations at SOVAS since 2016, including in the Best Political Voice Over, Best Promo, Best Narration, and Demo Production categories.

Friedlander currently voices “Toymakerz” on the History Channel — its fourth season began in the fall — and has provided voices for “Hunter X Hunter” and “One Punch Man,” among others.

In 2016, he voiced the new History Channel series “Evil Genius,” an eight-episode series about the most ingenious crimes of the past 100 years, according to his website.

According to his website, Friedlander specializes “in Promo, Political, Commercial, Narration, and Animation.”

In 2015 he was the winner of the That’s VoiceOver/CBS2 Audition Spotlight.

“My personal voice-over work has been a lot of political narration, the History Channel, some promos. But as far as the studio itself goes, we’re open to the public, we have some high-profile clients — we’ve had a massive amount of fairly high-profile clients over the past couple of years. So it varies. We’ve done a lot of video-game work, a lot of podcasts.”

Regarding business, Friedlander said the COVID-19 pandemic has forced some adjustments in the interest of safety. Among those are that only one of his L.A.-area studios is open.

In addition, the technical process of recording has become streamlined.

As many musicians and artists have been forced to become engineers, it is helpful that technology has advanced so much in recent years. With a fairly rudimentary amount of software savvy, audio files can easily be transferred with minimal travel and contact.

“I’ve kind of got two simultaneous careers — one as a voice actor, and one is on the studio side of things,” he said.

Tim Friedlander on the Web