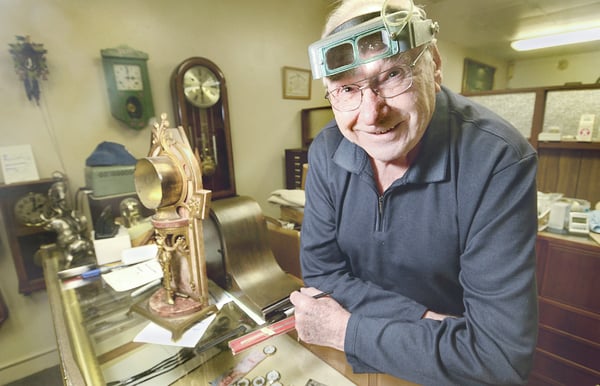 Local clock repairman and World War II veteran Howard Peterson has been in Mount Vernon since 1972. The now 90-year-old drove a tank across Europe during the war, providing support for the infantry. Frank Varga / Skagit Valley Herald 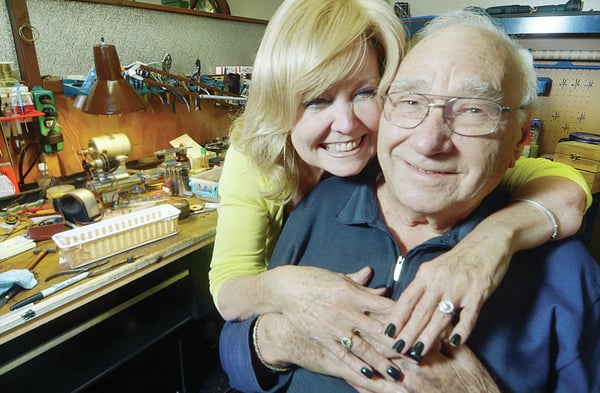 Howard Peterson with his wife, Linda. They've been married a year, after they met when she came into his clock repair shop. Frank Varga / Skagit Valley Herald 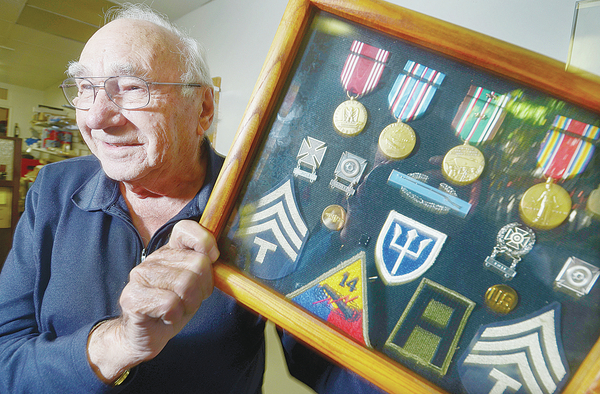 Howard Peterson is most proud of his combat infantry badge (second row, third from left), which he earned as a tank driver in Europe during World War II. Frank Varga / Skagit Valley Herald

Local clock repairman and World War II veteran Howard Peterson has been in Mount Vernon since 1972. The now 90-year-old drove a tank across Europe during the war, providing support for the infantry. Frank Varga / Skagit Valley Herald

Howard Peterson with his wife, Linda. They've been married a year, after they met when she came into his clock repair shop. Frank Varga / Skagit Valley Herald

Howard Peterson is most proud of his combat infantry badge (second row, third from left), which he earned as a tank driver in Europe during World War II. Frank Varga / Skagit Valley Herald

OUNT VERNON — Local clock repairman Howard Peterson has been in the storefront on Pine Street since 1972 and along with the many clocks hanging on the walls of his workshop, the 90-year-old has a framed reminder of the time before he settled in the Skagit Valley. It’s a batch of badges and medals he earned during World War II driving a tank across war-torn Europe.

In 1945, Peterson landed at Le Havre, France, as part of the U.S. Army’s 386th regiment of the 97th infantry division. He drove a 32-ton M7 tank to Czechoslovakia after advancing through Belgium, across the tip of Holland and into Germany.

The rough, smoking landscape of Europe at the time was a far cry from the 240-acre Michigan farm where Peterson grew up.

Peterson, 19 at the time, had experienced a lot since he had been drafted into the Army on Dec. 7, 1942 — a year after the infamous Japanese attack on Pearl Harbor. He was sent to Camp Chaffee in Arkansas and mixed with many different people he might never have met otherwise.

His tank supported the infantry and made it easier for them to operate, he said. If soldiers needed to clear a building of enemy troops and were at risk of getting killed, his tank would simply knock the structure down first.

“We’d go hit and run, and the running was the best part of that,” he said, laughing. “We’d get about 22 miles an hour. That was going pretty fast for one of those things. That’s slow nowadays.”

Peterson was one of the youngest of the five men in the tank; he imagines they are all dead now.

“We were a bunch of crazy guys,” he said.

When the crew would stop at night, the soldiers would pull out the finery they’d found while rolling through Germany. Tuxedo jackets were a favorite item.

“We’d be around with nobody there, and we’d put our top hat on and our tuxedo,” he said. “And we’d put our submachine gun over our shoulder and our pistol belt on.”

Goofiness like that was a way to lighten the situation. Being in a war zone was a roller coaster of emotions, from fear to anger, Peterson said.

Those emotions were starkest when he’d watch the infantry troops come off the front lines.

“You look in their eyes, and that was always scary,” he said. With the exhaustion and the fear, “… it was just like looking into black holes.”

Then the men would get warmed up, eat something and head back out to battle.

“We were never heroes,” Peterson said. “We’d just do our job every day and try to stay alive and get something to eat.”

Over the years, the members of his unit lost touch. After the war ended in Europe, Peterson’s unit was sent to Japan without him, he said. His unit was halfway to Japan when the United States dropped the atomic bomb, while he was laid up with perforated eardrums from training exercises.

Peterson headed to Chicago when he got out of the Army, eventually learning watchmaking on the G.I. Bill and taking a correspondence course in gemology.

He worked for several jewelry retailers before purchasing the store in Mount Vernon in the 1970s after seeing an ad for the place in the newspaper.

“I bought the fixtures and started the business and have been here ever since,” he said.

After a while, he retired and changed his business to clock repair, which he runs Monday through Friday.

He still has his uniform, though he can’t get it on anymore, he joked.

“I put my old steel helmet on, and I can’t keep my head up straight anymore,” he said.

When Veterans Day rolls around, Peterson said he doesn’t generally participate in parades or other events; it can get too emotional for him. Instead, he’ll spend time with his wife.

“I stay away from listening to Taps,” he said. “Too sad.”