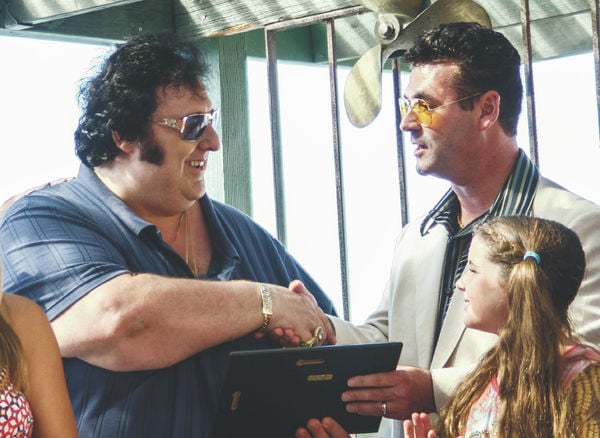 Peter Vallee, also known as Big Elvis, accepts a key to La Conner from Mayor Ramon Hayes last Wednesday while on a break from shooting the film "La Conner P.D.: The Big Elvis Files." Vallee performs regularly at Harrah's in Las Vegas, where he does a show that he says goes beyond simply impersonating "The King," Elvis Presley. Daniel DeMay / Skagit Valley Herald 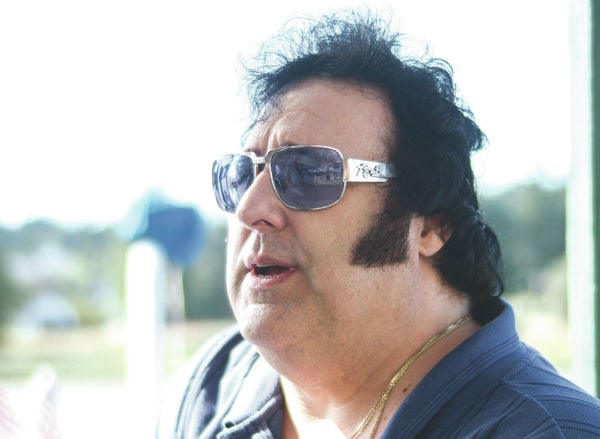 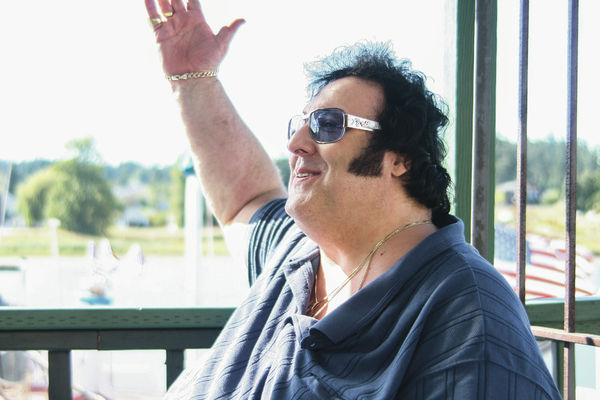 Peter Vallee, also known as Big Elvis, accepts a key to La Conner from Mayor Ramon Hayes last Wednesday while on a break from shooting the film "La Conner P.D.: The Big Elvis Files." Vallee performs regularly at Harrah's in Las Vegas, where he does a show that he says goes beyond simply impersonating "The King," Elvis Presley. Daniel DeMay / Skagit Valley Herald

LA CONNER — Take an uncanny likeness of a famous rockabilly voice. Add a head of pompadour hair along with rings and sunglasses emblazoned with lightning bolts and the letters T.C.B. Then fit it all into a 400-plus-pound frame.

You’ll get Peter Vallee, who certainly lives up to his billing as “Big Elvis.”

Mayor Ramon Hayes presented Vallee with the ceremonial key to La Conner on Wednesday in recognition of Vallee’s support for the town and its residents, as well as his illustrious, decades-long career performing the music of Elvis Presley in Las Vegas.

“There’s a reason he’s so popular on the Strip,” Hayes said.

Vallee was in town for several days with a production crew last week filming scenes for his upcoming movie, “La Conner PD: The Big Elvis Files.” The film will premiere next spring in Las Vegas in conjunction with Vallee’s 50th birthday, as well as his inclusion on the city’s Walk of Stars, which honors performers who have contributed to its allure.

Vallee’s connection to La Conner comes by way of his brother, Guy Vallee, who owns and operates the Waterfront Cafe on First Street with his wife, Marla Vallee.

She said the movie is a fun way to celebrate her brother-in-law’s career and the impact he’s had on the entertainment world as Big Elvis.

“Plus, we’re showing off our little town of La Conner,” Marla Vallee said.

Guy Vallee wrote the original script for the movie and also played a role in the film, as did Mayor Hayes.

As Big Elvis, Peter Vallee said he tries to go beyond being just another impersonator of “The King.”

Vallee’s size plays a big part in that, especially earlier in his career when he weighed more than 900 pounds.

But Bill Ervin, president of Big Elvis’ fan club and a close friend, said it has always been Vallee’s voice that carried his act, as well as the man’s friendly and humble demeanor.

Vallee said he enjoyed his time in La Conner and was happy to meet and work with local residents, several of whom played roles in the movie’s production. Filming will continue in Las Vegas later this fall.

That is indeed a big Elvis! :)