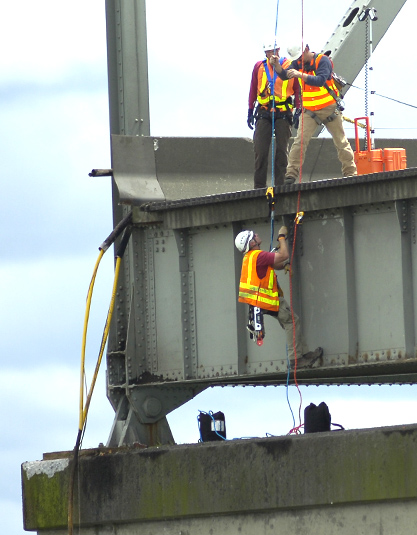 A bridge inspector uses a rope to climb up from a piling of the Skagit River Bridge. 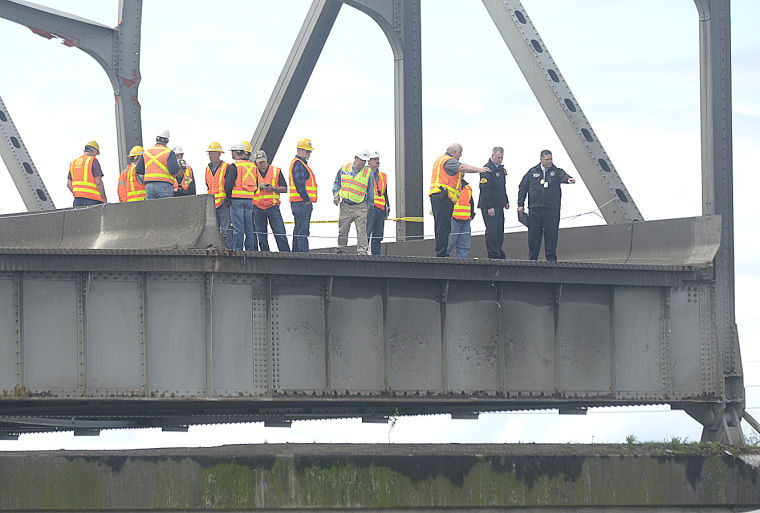 Officials from several agencies gather at the north end of the Skagit River Bridge about noon today to make their initial assessment of the collapsed bridge.

A bridge inspector uses a rope to climb up from a piling of the Skagit River Bridge.

Officials from several agencies gather at the north end of the Skagit River Bridge about noon today to make their initial assessment of the collapsed bridge.

MOUNT VERNON — It’s unlikely that Skagit County will get a brand-new, modern bridge following Thursday’s collapse of a span over the Skagit River on Interstate 5.

Replacing the entire Interstate 5 bridge between Burlington and Mount Vernon may not be an option due to financial constraints, Lynn Peterson, secretary of the state Department of Transportation, said Friday.

“Under current fiscal constraints, there is no intent to rebuild this (entire) bridge,” Peterson said.

Instead, it’s likely the span will be replaced based on the state it was in when it collapsed.

Other bridges score lower on a safety scale than the Skagit River Bridge before its collapse, she said.

A 160-foot span of the Skagit River Bridge between Burlington and Mount Vernon collapsed about 7 p.m. Thursday, sending two vehicles and three people plunging into the water. All three were rescued.

Late Thursday night, Gov. Jay Inslee arrived in Skagit County to meet with local officials, and he brought the news that it will cost $15 million to repair the bridge. The federal government has already promised the state $1 million in emergency funding.

So far, officials know a flat-bed truck carrying a drill housing struck several trusses on the southbound lane of Interstate 5. The driver of the rig, who worked with Mullen Trucking, is cooperating with the investigation. State Patrol said 41-year-old William Scott of Alberta, Canada, has not been charged with a crime.

He voluntarily gave a blood sample for an alcohol test and was not arrested.

Mike Allende, a DOT spokesman, confirmed the truck had a permit to cross the bridge.

“We’re still trying to figure out why it hit the bridge,” Allende told The Associated Press. “It’s ultimately up to the trucking company to figure out whether it can get through.”

State officials approved the trucking company to carry a load as high as 15 feet, 9 inches, according to the permit released by the state. However, the southbound vertical clearance on the Skagit River bridge is as little as 14 feet, 9 inches, state records show. The bridge’s curved overhead girders are higher in the center of the bridge but sweep lower toward a driver’s right side, the AP reported.

Officials with the cities of Burlington and Mount Vernon declared states of emergency to allow federal funding to flow to the area. Skagit County commissioners did the same at noon Friday, with two of them calling in from Arizona.

National Transportation Safety Board Chairman Debbie Hersman said investigators will work for the next seven to 10 days to determine a cause of the collapse. The group will examine four areas: bridge design and maintenance, human performance, motor carrier operations and survival factors and emergency response.

Investigators will conduct underwater surveys of the bridge’s cement pilings and look at the understory for weaknesses. Some of the investigation will occur concurrently with efforts to repair the damaged span or replace the bridge entirely. Some investigators may remain in the area for longer, Hersman said.

A final report could take a year, she said.

The bridge “is showing its age, certainly,” Hersman said.

Dike District 12 commissioner Lorna Ellestad said earlier in the day she hoped the fallen bridge might result in a new bridge that would accommodate future flood protection needs. The Skagit River is the third largest river on the contiguous West Coast and is prone to regular and potentially devastating winter floods.

But when she heard the bridge might not be totally replaced, she called the option “like putting a broken arm in a sling.”

“All you’re doing is delaying the inevitable,” Ellestad said. “All this collapse is doing is replicating what would happen after a flood.”

Dillon also said she was disappointed that the bridge might not be totally replaced.

“What a perfect opportunity to replace something that’s deficient and we all know is an impediment to flood control,” Dillon said.

While officials said they weren’t sure exactly how long the bridge would be out, many said to brace for several months of snarled traffic.

Already, the DOT has changed detour routes a few times. One route would have taken heavy trucks over the North Fork Bridge on the Skagit River on Best Road near Fir Island Road.

Dillon said that route greatly concerned the commissioners because the county Public Works Department identified that bridge as structurally deficient.

“If I listen to my structural engineers, say two trucks are on that bridge at the same time, the possibility of collapsing is there,” Dillon said.

Friday evening, DOT officials said they planned to change the detour yet again, this time to a three-tiered system that changes depending on traffic.

Meanwhile, Ellestad said the economic impact of a long closure would be “huge.”

“It’s all a matter of traffic delays and lost commerce,” she said. “It’s in the millions of dollars per day.”