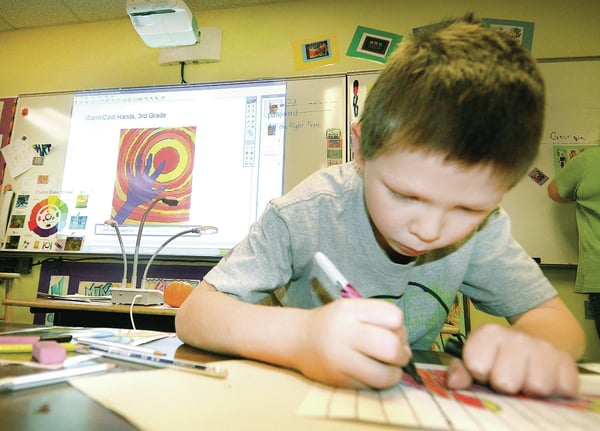 Third-grade student Ray Ross, 9, concentrates on a graphic drawing using the example projected behind him as an example. Frank Varga / Skagit Valley Herald 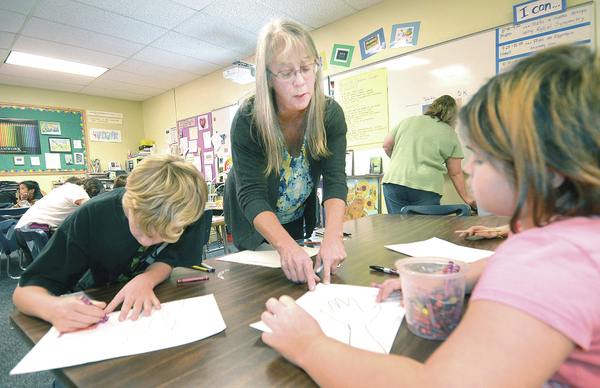 Third-grade student Ray Ross, 9, concentrates on a graphic drawing using the example projected behind him as an example. Frank Varga / Skagit Valley Herald

CONCRETE — The halls of Concrete Elementary School are decorative and colorful, lined with the artwork of the kindergarten through eighth-grade students who fill its classrooms. On one wall, you might find representations of the word “respect,” and on another, hand-painted American flags.

“Her work is everywhere,” district superintendent Barbara Hawkings said while walking through the halls.

Kerschner has been placing an emphasis on art in the classroom since she first started at Concrete Elementary in 1990 — first as a special-education teacher, then as a primary teacher and now as the “creative design” teacher.

“I always incorporated art into whatever grade level I was teaching because I always felt it was important,” Kerschner said.

Many school tasks are left-brained, she said, so by incorporating more art activities into her curriculum she can get students to use other parts of their brains. Now that she sees students of all grades, not just her particular class, Kerschner still tries to incorporate art and design with what the students are learning in class.

“It’s another way for them to learn about a subject or a topic,” Kerschner said.

On this day, the third-graders in Kerschner’s class are learning about warm and cool colors: using “echo lines” to create shapes and tracing their hands. It’s one of 10-year-old Jenavie Clark’s favorite things to draw.

But Kerschner doesn’t just want the students’ artwork to be stashed away in the halls, only seen by students, parents and the occasional visitor. That’s why she’s incorporated a website called “Artsonia” into her class, which allows her to catalogue all her students’ work on one site for all to see.

“It’s a really good way to share our artwork beyond our school,” Kerschner said.

Artsonia, which bills itself as an online art museum, recently acknowledged Kerschner as one of the top in the state for displaying students’ art. Artsonia also allows parents to print their child’s artwork, including on things like mugs, ornaments and cards. Kerschner said she thinks she is the only teacher in the district to use the site.

For Kerschner, art isn’t just about school, it’s also about community. That’s why every month she also takes some of the students’ artwork down to the Concrete Senior Center.

“I think art is important,” she said. “It helps people to think and problem solve in different ways.”

To see some of the artwork students in Kerschner’s class have done, visit artsonia.com and search for Concrete Elementary.