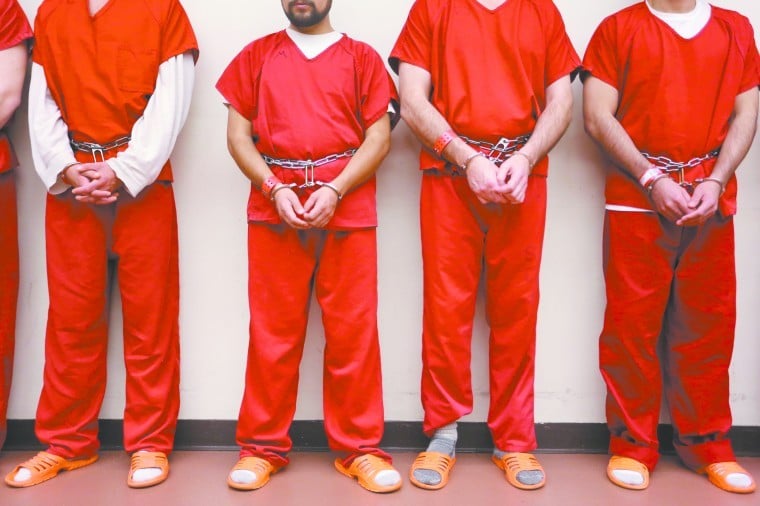 Skagit County Jail inmates line up on a Thursday afternoon before being taken for their Superior Court appearances. Colin Diltz / Skagit Valley Herald 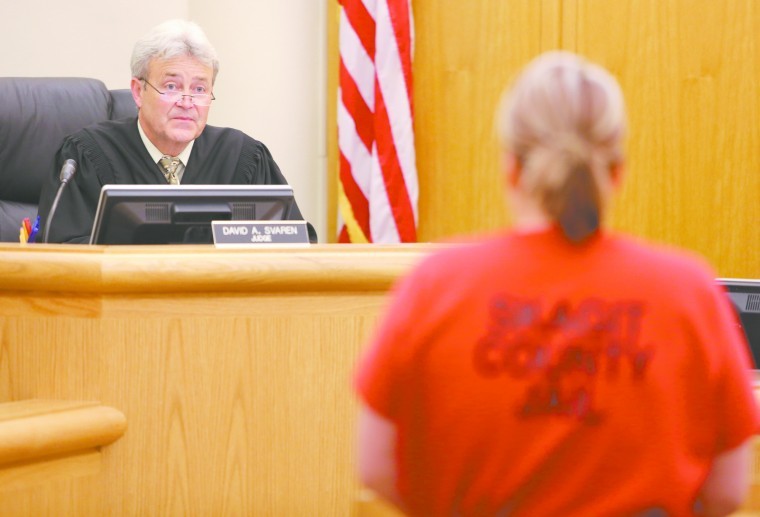 Skagit County District Court Judge David Svaren listens to a jail inmate in her first hearing before a judge after her arrest for a crime. Colin Diltz / Skagit Valley Herald 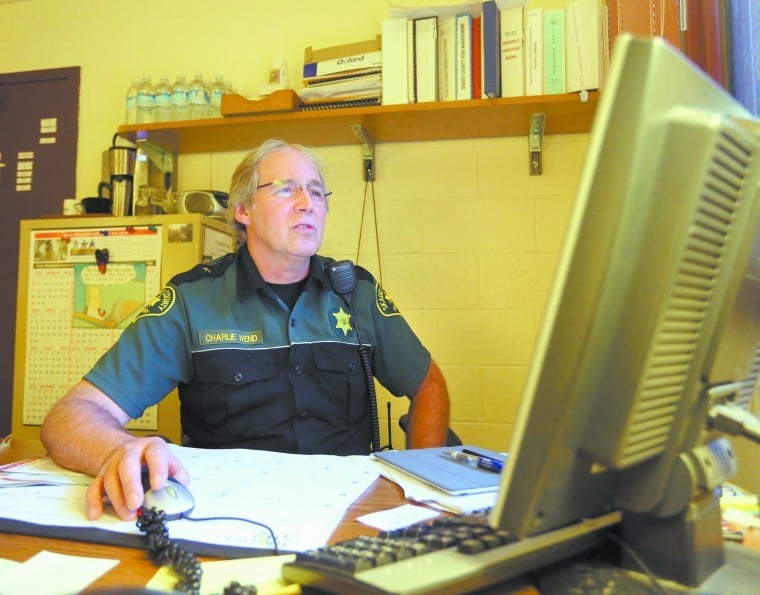 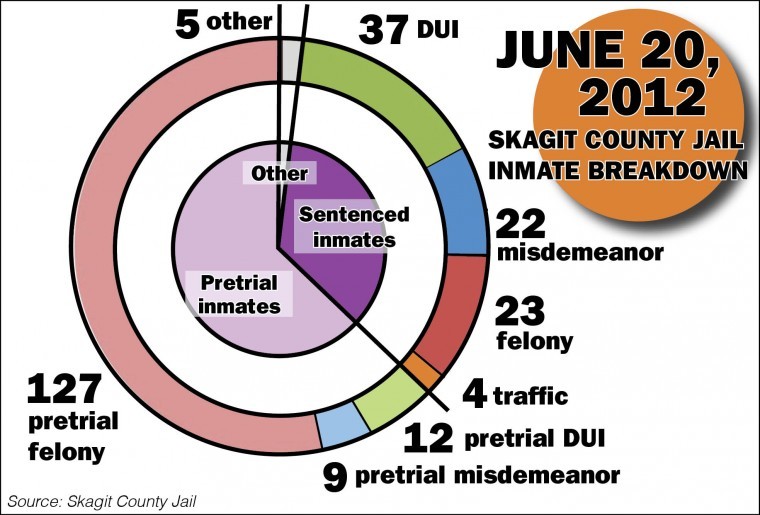 The breakdown of inmates in the Skagit County Jail on June 20, 2012. Felonies are crimes for which a convicted offender may spend a year or more in prison. Misdemeanor convictions allow offenders to serve less than a year in jail. Graphic by Brittny Goodsell. 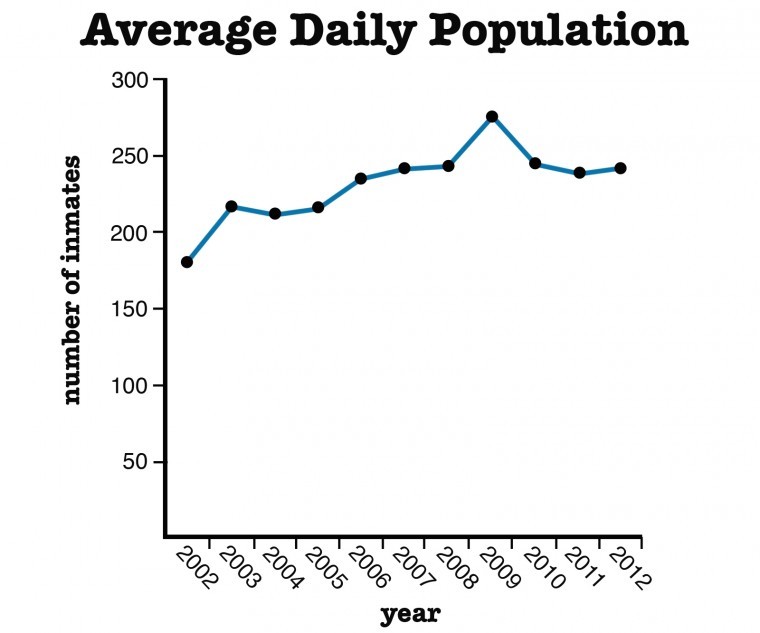 The number of inmates at the Skagit County Jail has increased in recent years. In 2010, the jail started housing many inmates outside of the county. That practice has since been curtailed. Graphic by Amelia Dickson.

Skagit County Jail inmates line up on a Thursday afternoon before being taken for their Superior Court appearances. Colin Diltz / Skagit Valley Herald

Skagit County District Court Judge David Svaren listens to a jail inmate in her first hearing before a judge after her arrest for a crime. Colin Diltz / Skagit Valley Herald

The breakdown of inmates in the Skagit County Jail on June 20, 2012. Felonies are crimes for which a convicted offender may spend a year or more in prison. Misdemeanor convictions allow offenders to serve less than a year in jail. Graphic by Brittny Goodsell.

The number of inmates at the Skagit County Jail has increased in recent years. In 2010, the jail started housing many inmates outside of the county. That practice has since been curtailed. Graphic by Amelia Dickson.

He arrived more than an hour before dawn in a cold December rain to hold court hearings for about two dozen people who had been booked into the Skagit County Jail over the weekend.

Nearly 30 years ago, the jail was built to hold 83 inmates. Two remodels later, more than 200 people are incarcerated there on a typical day — and officials say they need room for more.

As it is, three inmates often sleep in a room the size of an office cubicle. Recreation rooms have been converted to dormitory-style housing for women.

Few would argue: It’s time to build a new jail.

But that won’t be easy — or cheap, as Roger Howard knows first-hand.

“It’s a challenging project. I remember because I did it 35 years ago,” Howard said.

Howard was the manager of the jail project in the late 1970s. At that time, the state had $237 million to spend on county jails statewide.

The state studied inmate conditions in county jails, and Skagit County ranked low enough to receive $6.1 million for a 75-bed jail, he said. The sheriff at that time added another eight cells, bringing the total to 83.

The current jail, which opened in 1984, allowed inmates 72 square feet of personal space and access to natural light — the state standard at the time.

“Our whole jail cost $7.2 million,” Howard said. “That wouldn’t build much today. We never thought we’d have to replace it.”

The size of the next jail will determine the cost. One consultant suggests that the county build a 400-bed jail, which would cost roughly $70 million, said Marc Estvold, the county’s jail project manager.

And then there are the ongoing costs to consider. A bigger jail would require more deputies. This also would mean cities in Skagit County would pay a higher cost for justice.

But to Svaren and local law enforcement, it’s only a matter of time before the wrong person is left on the street because there’s simply no room in the jail.

“One of my biggest fears is that somebody who should be in custody and isn’t may be on that sixth bench warrant on a fourth DUI case, goes out and commits a fifth one, and in this case, there’s a terrific accident,” Svaren said.

As Superior Court Judge Michael Rickert puts it, “We’re in the red zone.”

For nearly a decade, police officers have issued citations to low-level offenders along with a court date instead of immediately taking someone to the jail. That includes people charged with property crimes such as identity and vehicle theft, and even disorderly conduct cases in which the community might be safer with an alcohol- or drug-influenced person in jail for the night.

Those who end up in jail are increasingly the county’s most violent. The crowded conditions don’t make the inmates or the officers who look after them safer.

Tempers flare among inmates crammed together in cells or a rec room-turned-jail pod, putting them and corrections officers at risk. Criminals who commit property crimes or don’t have a long enough rap sheet are turned away from the jail and given a court date in hopes they will show up — and don’t commit more serious offenses in the meantime.

The men are housed up to three in a pod, with two in bunks and one on the floor next to the toilet. Inmates spend 21 hours a day locked up inside.

“I feel like an animal being locked down all day,” said one inmate, Alden.

Attorneys often don’t have room to meet with their clients. At times, the jail is simply shut down.

Judges and jail sergeants maintain a delicate balance managing the jail’s population. Sergeants make lists of candidates for early release and pass them on to a judge for a final say. Inmates are released early only if they have served a majority of their sentence, and only if other more dangerous people are being booked into the jail.

New inmates often spend just a few hours in jail before they are released on a personal recognizance bond — a promise to return to court.

But before they qualify for release, they have to see a district court judge. On one cold December morning, that was Judge Svaren.

One by one, the inmates shuffled into a bare courtroom. A man rubbed the sleep out of his eyes with the shrug of a shoulder — his hands were cuffed at his waist by a short, silver chain.

District Court Judges Svaren and Warren Gilbert, along with court comissioner Linford Smith, share early morning courtroom duty throughout the year — including during busy holidays like Christmas, Thanksgiving and the Fourth of July.

Monday mornings are bustling for District Court. The judge arrives at about 6:30 a.m. — his staff earlier than that — to review the files of people arrested over the weekend.

Svaren separates files into two piles: one for those who “absolutely aren’t going anywhere” and another that he takes into his office for further review to see if the person can qualify for a personal recognizance bond or determine the range for bail.

“It’s changed a lot in the 12-plus years I’ve been on the bench,” Svaren said. “Folks that I wouldn’t have been releasing 12 years ago I am releasing now.”

A case in point: One man had warrants for his arrest, which included third-degree theft, obstructing a police officer and marijuana use. After missing several court dates, he stood in front of Svaren and said he wouldn’t miss another. He was scheduled for court in each of the three cities from which he had warrants in late December.

“Have a good day,” the man said as he stepped out of the courtroom.

Now judges have issued another bench warrant — his eighth — and he is scheduled to appear in a Sedro-Woolley courtroom.

Each time the man was released and issued a new warrant, his court date was pushed out further.

It’s delays like this that cause cases to go stale, Svaren said.

“That means that just by being simply passive-aggressive and not coming to court, the prosecutor’s ability to prosecute the case has become worse,” Svaren said. “Police officers get reassigned, memories go bad, witnesses disappear in any case that goes stale.”

In police departments countywide, officers know they can’t just arrest people and expect them to go to jail. Officers in Sedro-Woolley have stopped arresting people wanted on warrants altogether because it generates too much paperwork.

In July, Anacortes police arrested a man who stole items from about a dozen vehicles in one night. The items, valued at thousands of dollars, were all recovered. But when officers were told the jail was full, they had to release him back into the community with a court date.

“We release people who are at risk of committing additional crimes on that same date. We never like doing that,” Bowers said. “The judge can put restrictions (on behavior) that we can’t.”

Judges and police officers say the county’s criminal element grows bolder by the day; many know they probably won’t be going to jail anytime soon. The inmates booked into jail and kept inside are violent and frequent offenders: those who commit felonies, pose a physical danger to others or have at least five warrants out for their arrest.

Meanwhile, small-time criminals have brazenly approached patrol officers on the street and asked for a book and release — just to get a new court date, said Sgt. Chris Baldwin of the Skagit County Sheriff’s Office.

“It’s very frustrating,” Baldwin said. “We just keep doing book and releases till they meet the criteria and (the jail) will take them.”

Skagit County's jail has long been outdated and overcrowded, but funding a new one was the challenge officials have struggled with for years. …