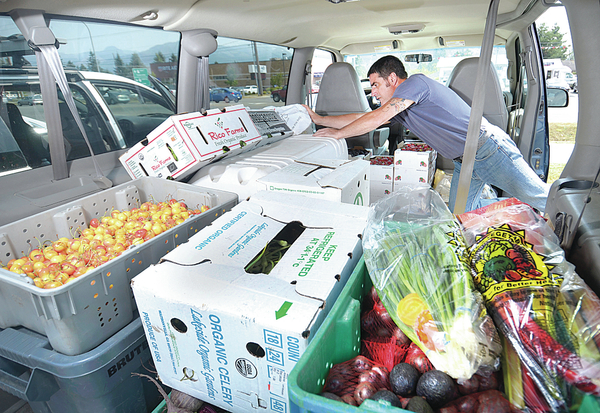 Shelby Slater jams a cooler full of chicken into the back of an already stuffed van. Slater, chef/foodshed manager at the North Cascades Environmental Learning Center sets off weekly with quite the shopping list. Frank Varga / Skagit Valley Herald 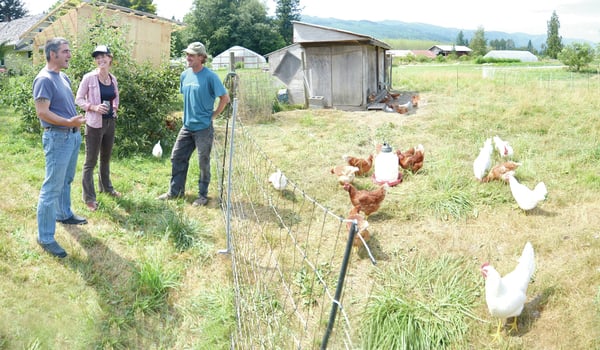 Shelby Slater wants to be on a first name basis with the farmers he deals with as chef at the North Cascades Environmental Learning Center. Here, Slater talks with Osprey Hill Farms owners Geoff and Anna Martin about their chickens and garlic scapes. The farm is located in Acme. Frank Varga / Skagit Valley Herald 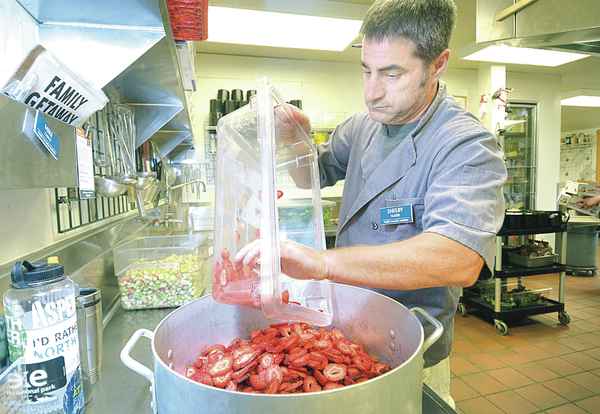 Chef Shelby Slater adds freshly bought and cut strawberry to what emerged from the oven as a succulent rhubarb and strawberry crisp. 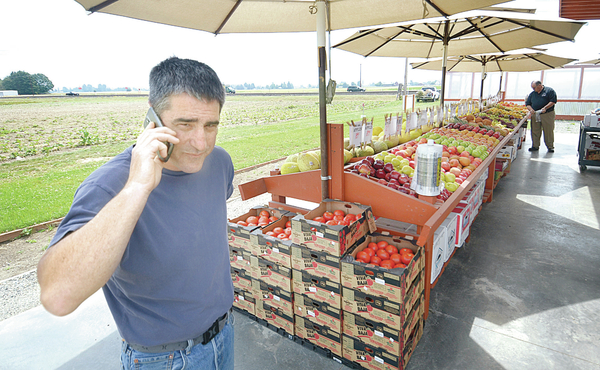 Constantly talking produce and proteins, chef Shelby Slater talks to his "salmon guy" while perusing the fruits and vegetables available at the always stocked Viva Farms.

Shelby Slater jams a cooler full of chicken into the back of an already stuffed van. Slater, chef/foodshed manager at the North Cascades Environmental Learning Center sets off weekly with quite the shopping list. Frank Varga / Skagit Valley Herald

Shelby Slater wants to be on a first name basis with the farmers he deals with as chef at the North Cascades Environmental Learning Center. Here, Slater talks with Osprey Hill Farms owners Geoff and Anna Martin about their chickens and garlic scapes. The farm is located in Acme. Frank Varga / Skagit Valley Herald

Chef Shelby Slater adds freshly bought and cut strawberry to what emerged from the oven as a succulent rhubarb and strawberry crisp.

Constantly talking produce and proteins, chef Shelby Slater talks to his "salmon guy" while perusing the fruits and vegetables available at the always stocked Viva Farms.

Slater, the chef/foodshed manager at the North Cascades Environmental Learning Center on the banks of Diablo Lake, takes lists to another level when he goes shopping.

Vegetables by the boxes, berries by the flats, beef by the cow, salmon by the school and chickens by the coop; it’s impressive.

Slater takes that list and goes shopping locally about once a week. It’s a grocery run of epic proportions, and seeing how his kitchen is tucked away deep in the North Cascades, Slater has to be logistically spot on, for there is no corner grocer to visit on short notice.

It’s a lot of work, he said, but he wouldn’t have it any other way.

“This is what I love to do and how I want to do it,” Slater said. “It’s about getting creative. And I certainly get creative. That’s just one of the things I love about this job.”

His ingredients must be fresh. Very fresh. Picked-that-day fresh.

And it has to be local; Slater wouldn’t have it any other way. The only thing he microwaves? His coffee.

“That’s my message,” Slater said. “Buy local. Support your local farms and farmers. The farms I frequent, they know what I want and what I like to use.”

On this day, Slater stood outside the Viva Farms fruit and vegetable stand. He was on the phone with his salmon supplier, setting up a drop of several hundred pounds in Sedro-Woolley.

He ventures inside and is met by manager Randy Kok, who runs down the haves and have-nots as far as inventory.

“It’s great when Shelby stops by because he buys stuff by the crate,” Kok said.

Slater soon has flats of tayberries and strawberries. He placed an order of peaches from Yakima. Then it’s stacks of green onions, a sack of small yellow onions and a bushel of rhubarb.

“I think I see pies in the future,” said Slater. “Lots of pies. Rhubarb is interesting. I only use it in a couple of dishes. Green onions, I’ll use them all the time. Remember, I am responsible for feeding about 75 people per day. That can always go up. When Mountain School is in session, that’s 90 kids for breakfast and dinner.”

There are inherent risks to using such fresh ingredients, particularly in Slater’s situation.

His menu planning revolves around what he can get his hands on. One farm grows heirloom tomatoes specifically for Slater’s use.

“I’m not some restaurant. I don’t have a set menu, and people like that. And my crew likes that because it gives them the opportunity to be creative. To figure out what to do with what we have. It’s really flying by the seat of your pants — but it’s fun.”

Quality from the start

There is no such thing as “mystery meat” inside Slater’s dining hall, and as he heads down the dirt road to visit Osprey Hill Farms in Acme, he has organic chicken on his mind — as well as on his list.

“I actually inherited this farm from the chef who was here before me,” Slater said. “They raise the chickens, butcher them and then I buy them frozen. I also get my turkeys here for Thanksgiving. They also raise cilantro, fennel and garlic.”

Lots of garlic. Anna and Geoff Martin have dedicated an entire barn wall to garlic.

“We actually raise eight different varieties of garlic,” Anna Martin said. “We raise it, store it, dry it and then get the seeds from the bulbs. It’s a big deal, using your own seeds. Around here, our practices have to be good. Garlic has to be aesthetically pleasing.”

“If you need flavors for your creations, this is the place,” Slater said. “I mean they grow it, they know what to do with it. That’s why I always stop and talk with the farmers, because who would know any better?”

Slater’s next stop is a Sedro-Woolley parking lot where he meets his “salmon guy,” Don Power of Nerka Sea Frozen Salmon, a Bellingham company more accustomed to providing salmon to restaurants, rather than deals in parking lots. From Power’s van, Slater unloads 350 pounds of salmon, 30 pounds of smoked salmon and 12.5 pounds of lox.

Slater gets his beef from Nooksack Delta Ranch in Ferndale.

His crew takes the food from field to table in a flurry of activity that can be best described a choreographed dance. They do it again and again, day after day, week after week, serving meals for individuals and groups who have worked up large appetites while immersing themselves in all the Environmental Learning Center offers.

That immersion includes Slater’s efforts. He is not only a chef, he’s also a teacher. And his message is as hearty — and as important — as the food on the buffet line.

“What we eat impacts a lot of different aspects of life. Here, we promote health and wellness as a strategic goal,” Slater said.

A history of healthy

Slater is no stranger to food and the food services in general. He began in the food industry at the age of 15 while growing up in Anacortes. Best described as a culinary free spirit, he soon yearned for challenges that went beyond a repetitive, daily menu. After working in several restaurants, he was up for a change. So he struck out for Alaska, where he became the chef aboard a commercial fishing vessel, and his kitchen bobbed upon the waters of the Bering Sea for 18 years.

Now his kitchen sits above the shimmering waters of Diablo Lake, and his duties go beyond simply food preparation.

“I am an educator as well,” he said. “So everyone here is part of the overall learning and teaching process. We are part of this experience and everyone is on board. I give presentations at schools to environmental classes as part of the Foodshed Program. It’s very cool.”

“This is only the second kitchen I’ve ever cooked in,” Cuseo said. “… We actually have a lot of fun. It’s also a real challenge.”

The rest of the team includes Angel Dominguez and Gabby Suval. Suval was fresh out of culinary school and said she’d learned a lot in the couple of weeks she’d been in Slater’s kitchen.

“It’s a good crew,” said Slater. “Mike’s been up here for five years now, and he comes from a food background.”

When he and Cuseo take inventory to plan menus, they are thinking about not only what they need, but where they’ll get it.

“We can watch what goes into to everything we make and no there is no MSG, no extra sugar, etcetera. Plus, we can sub out ingredients to go gluten or dairy free,” Slater said. “That’s the sort of freedom we enjoy in regards to people’s dietary needs.”

But it isn’t just the cooking that fulfills him.

“It’s a program where I get to talk to kids, the media, teach classes and simply spread the word about food education.”