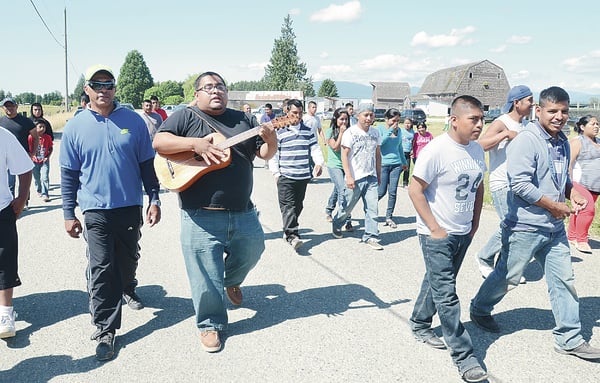 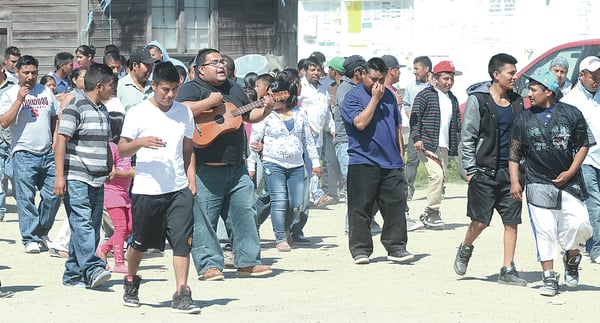 After talking to supervisory personnel, the workers head back to their camp residences. Scott Terrell / Skagit Valley Herald

After talking to supervisory personnel, the workers head back to their camp residences. Scott Terrell / Skagit Valley Herald

More than 200 migrant workers walked off the fields of Sakuma Bros. Farms on Thursday, saying they would not return to work if demands for higher wages and better working conditions were not met.

One worker, Federico Lopez, was reportedly fired after complaining openly about migrant workers’ wages and working conditions, as well as poor housing conditions, said Cornelio Ramirez through a translator.

One of the main issues, Ramirez said, was that temporary H-2A foreign workers who are coming in to help with the late blueberry and blackberry harvest in August will be guaranteed a higher minimum wage, have better housing and have all their transportation costs covered to and from Mexico.

Owner Steve Sakuma could not confirm Lopez’s firing, but said the H-2A contract had been offered to these workers and they would have priority if they chose to take it.

Sakuma said the law is complicated, and there may be misunderstandings about it.

Under federal law, H-2A workers must be provided transportation to and from where they are recruited along with housing and local transportation for personal matters. During an H-2A contract period, U.S. migrant workers like the group striking would have to be given similar compensation if they performed the same job as the foreign workers.

Sakuma said his farm is bringing 160 workers in under H-2A status, but not until Aug. 5.

The group gave a list of demands and grievances to farm President Ryan Sakuma before walking together back to their encampment.

The demands included the rehiring of Lopez, an increase in pay from 30 cents per pound to 70 cents per pound, better working and housing conditions and for workers to not be intimidated.

“They yell at us like we are children,” Ramirez said through a translator.

Steve Sakuma said he had no knowledge of any intimidation by managers. He also said the working conditions were not ideal, but they were typical of the work.

Sakuma added that the housing was up to state standards and was regularly inspected.

“It’s not the Hilton,” he said, adding that the workers don’t pay rent or utilities while they stay there.

Sakuma also said the pay was fair and higher than the standard rate.

“At 70 cents a pound, I would put a machine in there to pick it because there’s no profit for us at that rate,” he said.

Most of the demands on the list were unrelated to the H-2A workers’ compensation except for covering transportation costs and higher wages.

Another worker in the group striking, Irma Santiago, said through a translator that the workers were often forced to work through their breaks.

“We at least need time to eat lunch,” she said.

Sakuma said some managers might fail to ensure all workers take lunches when under pressure to finish getting a crop in, but that they are trained to try to enforce breaks.

“We’re not there to abuse people,” Sakuma said. “Without that labor force, we get nothing.”

The group met in their camp and elected 11 leaders to represent the group in a later meeting with the Sakumas before most of them drove to St. Charles Church to meet with representatives of the Northwest Justice Project, a group that offers legal assistance to low-income workers.

“I’ve never seen a group this organized walk off,” said Edgar Franks, who works with Community to Community Development, a group that works on social justice issues. “I’ve never heard of a list of demands.”

Rosalinda Guillen, who also works with Community to Community, said the workers are also worried about the welfare of their families.

“People only think about the workers,” Guillen said. “But these are families trying to live.”

Sakuma said the workers hadn’t brought up any issues to him before, but he would be willing to hear them out if they were reasonable.

“Given the right situation, we could all sit down and have a discussion about it,” he said. “But I want a collaborative, transparent approach.”

He said he understands the job is tough — it’s one he’s done himself.

“The most valued person out in our fields is the pickers. Without them, we’d have no crops. That has been our position in our family for three generations. I don’t think we’ve changed from that.”

He said that he didn’t want to lose the workers as he is already short on labor.