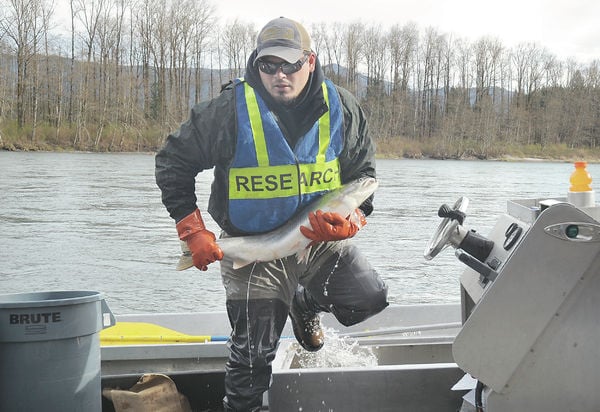 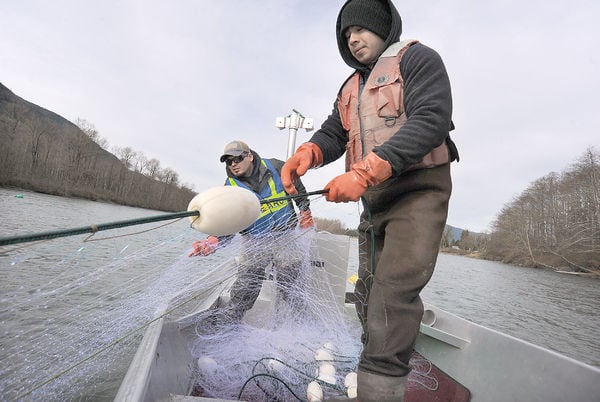 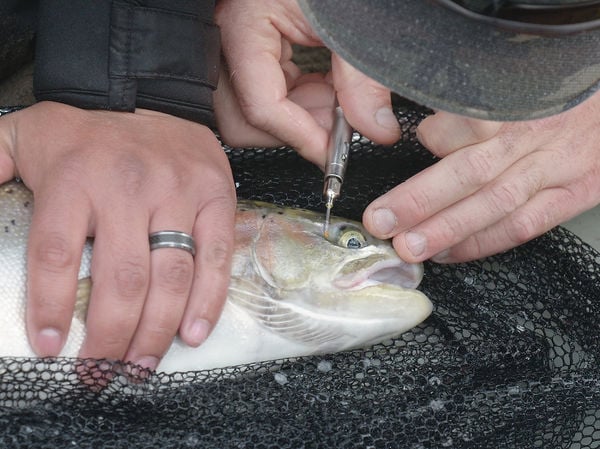 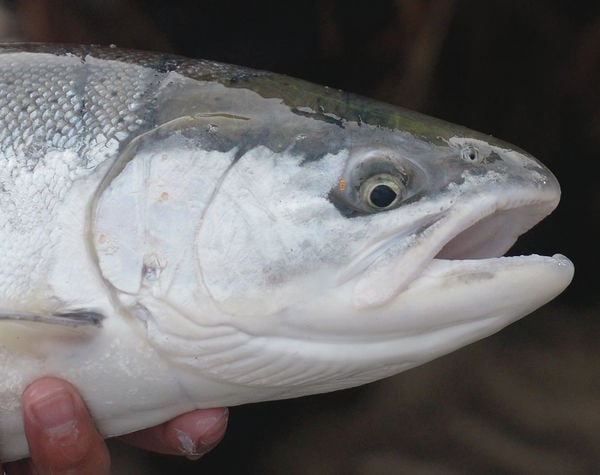 A wild steelhead has a visible coded tag placed behind its right eyelid. The tag is part of the research process being carried out by the Upper Skagit Tribe on Skagit River steelhead life cycles. Scott Terrell / Skagit Valley Herald 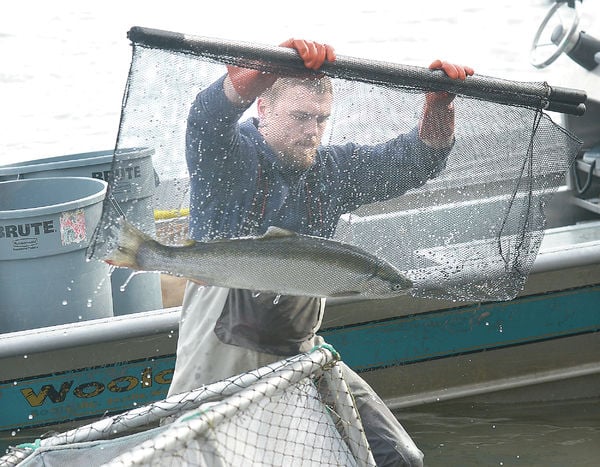 A wild steelhead has a visible coded tag placed behind its right eyelid. The tag is part of the research process being carried out by the Upper Skagit Tribe on Skagit River steelhead life cycles. Scott Terrell / Skagit Valley Herald

SEDRO-WOOLLEY — Twelve years is a long time to take a break from one of your greatest passions, but some Skagit River fishermen have no choice.

Steelhead will soon cease to return during the December-to-February fishing season, which is expected to cut off the treasured recreational opportunity on the mighty river. The steelhead hatchery’s closure last spring, for a 12-year period, is expected to put a near end to tribal customs as well as recreational and commercial fishing.

For Scott Schuyler, access to the fish also has deep roots in the historic survival of his people. It makes him uneasy to envision a future where his children aren’t able to partake in the long-standing tribal tradition.

When the winter steelhead season closed a month ago, Upper Skagit Indian Tribe employees launched into their third annual, 10-week effort to round up as many of the adult fish as they could for research purposes. The tribe is doing a range of studies on both juveniles and adults, trying to get a closer look at the species’ complex life cycle to help direct restoration and harvest management programs.

This year, however, marked the last full return of the river’s hatchery winter steelhead expected over the next several years.

Schuyler, who is the Upper Skagit Indian Tribe natural resources director, said the loss of the hatchery represents a loss of opportunity, family tradition, cultural heritage and winter meals for tribal members.

“We will miss having the availability of this fishery in the winter because having this hatchery is what sustained us December through March,” he said.

A question of approach

The fish aren’t expected to return because a year ago, juvenile hatchery fish were barred from being released as a result of a lawsuit between the Wild Fish Conservancy and state Department of Fish and Wildlife.

The conservancy argued Fish and Wildlife, which co-manages the state’s hatcheries with treaty tribes, violated the U.S. Endangered Species Act by using Chambers Creek steelhead in the Skagit River system. The state agreed April 25, 2014, not to release 720,000 fish into Puget Sound that spring and to close hatchery operations using the Chambers Creek fish on the Skagit River for 12 years.

The tribe is not opposed to the Wild Fish Conservancy’s argument for preserving the wild fish species, but thinks it’s more important to consider the big picture or take what Schuyler calls “a holistic approach.”

“Skagit has five operating dams. Every day, 365 days a year, they kill fish,” Schuyler said. “We’ve lost habitat over the last 100 years … you’re never going to get that habitat back where there is development.

“The only way to mitigate for those irreparable losses, in our mind, is through hatchery production,” he said.

It’s also problematic from the tribes’ view that they, even as co-managers, were not included in the discussion prior to the litigation.

Prior to the lawsuit, the tribe was working with state Fish and Wildlife to explore development of a new integrated production program. But even if they agreed on such a plan, it would still take a decade or more to achieve.

Segregated programs like the one that ended last spring use brood stock that returns at a time of year or place that is distinct from the wild stock’s pattern, McClure said. Integrated systems use a native fish stock that will return alongside the wild fish, essentially supplementing the population.

“Many believe it’s a better hatchery practice program because you’re not selecting for or introducing genetics that are not naturally occurring in the river,” McClure said.

The segregated approach was part of the rationale in introducing the Chambers Creek fish originally, he said. The species was in the Skagit River when the tribe needed food and the wild stock was not likely to be caught.

“With the elimination of that hatchery program, now the only access to steelhead is shifting more and more toward wild steelhead,” McClure said.

The wild fish gained federal Endangered Species Act protection in 2007. Therefore, fishing is already a limited opportunity, even for the tribes, Schuyler said.

A group called Occupy Skagit plans to protest the state’s steelhead fishing regulations for the third time April 4 in Rockport. The group is asking for a return of the spring catch-and-release season, which they believe would not harm the recovery of wild steelhead, which fisherman have been forbidden from catching since 2010.

The Upper Skagit Indian Tribe supports the recreational fishing industry as well as tribal fishing rights and would like to see the opportunity preserved for all, Schuyler said. But because several years are expected to pass before the fish return in full force, he worries the tribe will lose the tradition, which is passed down orally.

“If you cut something off, you basically take a link out of the chain,” he said. “We don’t want to be in a position where we’re not fishing anymore and lose that part of our history.”

The tribes’ research, however, will continue with the wild fish, he said.

A group of researchers last week gathered fish at three sites on the river using a tangle net, which does not harm them.

The net is strategically dropped in a “u” shape across the river and allowed to drift for several minutes. The crew then pulls in the net and releases the fish into an on-board holding tank filled with river water moments before.

When the boat pulls on shore, each of the four crew members has a series of tasks to complete.

Together, they set up in-river holding nets that look like a child’s playpen inundated with water and move the fish from the tank on the boat to the flooded containers.

Nontribal natural resources technician Josh Adams removes one fish at a time from the water pen in a small, hammock-like net and places each in a tank with mild, calming anesthetic.

When the fish is removed, the team of three other technicians move swiftly to measure the fish, record the sex and whether it has spawned, collect data samples and scales, insert a visible tag in the eyelid and, finally, stick it with a PIT tag.

The PIT tag is a passive integrative transponder. Like labels on electronic items at the store that set off alarms at the exits, the tags alert a system of antennas any time a fish is nearby, McClure said.

“That signal is unique, so we know what fish that is, where it came from, what age it is,” he said.

The orange eye tag is about the size of a grain of rice and intended to alert fishermen who catch it that it is part of a research study.

A few scales plucked from each fish can reveal its age and how many times it has ventured from fresh to salt water. Steelhead are unique salmonids in that they don’t die after spawning like Chinook salmon. They can travel between fresh and saltwater many times.

McClure said it’s not uncommon to see an 8-year-old steelhead in the Skagit River. But how long the fish spend in the ocean, how many times they return to the river to spawn and how long they stay there is highly variable.

Tribal researchers say understanding the species’ life cycle is important to restoration and harvest management. Some of the questions they hope to answer include:

— How fast do the fish travel from the river to the sea?

— Do they make pit stops along the way?

— Do they spawn in the same place each time they return?

— How far do they wander?

— What is the Skagit River’s production capacity?

Each week mid-February to mid-April the team, including Schuyler’s son and nephew, collects fish from three sites on the river. The most the team ever caught in one sweep was 47 fish.

The conservancy’s interest is in preserving the wild species. The agency is not wholly opposed to hatcheries, but wants to see peer-reviewed analysis of how any proposed hatchery plan might affect the wild fish, Beardslee said.

“Since these are listed fish, we think there’s an obligation to show why you think a new way of doing this would be better than ways in the past that have been tried,” he said.

Conservancy staff say three programs were previously attempted using broodstock on the Skagit River, and each resulted in less productive spawning activity down the line.

“You’re basically mining wild fish to put into a hatchery and hopefully having a benefit from that that will help the wild population,” Beardslee said. “They’re intended to spawn with other wild fish (but) earlier studies showed the effects to be very similar to what you find with a highly domesticated hatchery stock.”

While the state, tribes and conservancy ponder how to develop the next steelhead hatchery program for the Skagit, the hatchery fish will cease to return.

“The hatchery component will be really diminished this coming season and then almost nonexistent after that,” Schuyler said.

As he thinks about losing the fishery for more than a decade, Schuyler’s hoping for a resolution sooner than later, for the sake of the fish, the tribe and his family.

His daughter, Janelle Schuyler, went steelhead fishing for her first time this winter. She is 14 years old, which is when the tribe allows members to get their fishing licenses.

Scott Schuyler himself started fishing at age 16 and recalls ample opportunity to fish with his family. His son Darryl Schuyler, 23, also started steelhead fishing at an early age and is now one of four natural resources technicians involved with the tribes’ steelhead research.

Schuyler hopes Janelle will follow in his and Darryl’s footsteps, but says it will be hard to pass their tradition on if the opportunity evaporates with the 12-year moratorium.

“It’s going to leave a gap, and it’s about opportunity. The opportunity that has always been there and was there when I was young won’t be there for the interim … she’s being robbed of that,” he said.

Having steelhead in the upper Skagit River isn’t just about the tribe’s needs. It’s also about sustaining wildlife like otters and seals, Schuyler said.

“The benefits are not just for us, it’s for the ecosystem,” he said. “That’s what’s important to the tribe is having everything here, protecting the habitat and environment.”