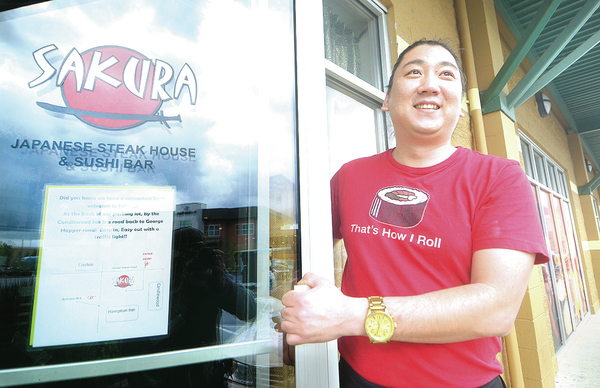 Alex Kim, owner of Sakura Japanese Steakhouse and Sushi Bar on Burlington Boulevard, turned to Facebook to let past customers know about daily specials and alternate routes to his restaurant on South Burlington Boulevard. Kim said since the Interstate 5 bridge collapse, business has been down 50 percent. Frank Varga / Skagit Valley Herald 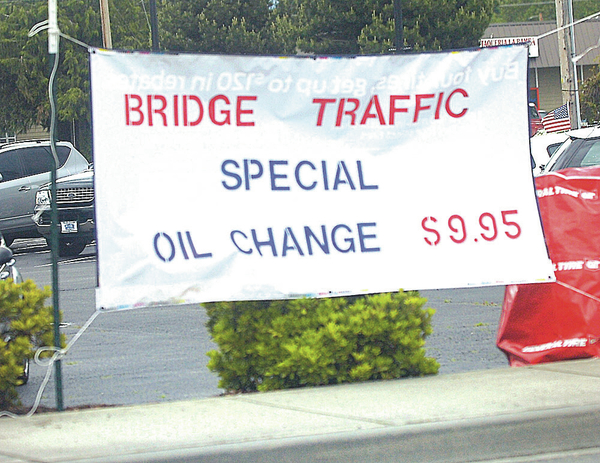 Alex Kim, owner of Sakura Japanese Steakhouse and Sushi Bar on Burlington Boulevard, turned to Facebook to let past customers know about daily specials and alternate routes to his restaurant on South Burlington Boulevard. Kim said since the Interstate 5 bridge collapse, business has been down 50 percent. Frank Varga / Skagit Valley Herald

BURLINGTON — Local business owners and others are using every tool in the box to bring back customers who have been avoiding local roadways following the Interstate 5 Skagit River Bridge collapse last week.

Daily deals, sales, information on alternate routes and increased marketing are just a few of the ways Skagit County businesses are hoping to let customers know they’re still open and accessible — and worth the wait.

The state Department of Transportation has rerouted traffic along a list of roads to avoid the collapse site, causing some major traffic backups and headaches for drivers. The reroutes have meant many people are taking their business elsewhere to stay clear of the area.

At times, commuters and freight trucks rerouted from the highway back up on Burlington Boulevard for blocks on both sides of the Riverside Bridge just east of the Skagit River Bridge. But at other times, the flow is close to normal.

Alex Kim, owner of Sakura Japanese Steakhouse & Sushi Bar on Burlington Boulevard, said his business has dropped by about half since the bridge collapsed May 23.

Hoping to rekindle the flame of previously loyal customers, Kim refocused his efforts on the restaurant’s Facebook page — advertising daily deals to customers who mention the page.

He also posted a map showing alternate routes to his restaurant that avoid Burlington Boulevard, and placed signs outside directing drivers to the back way in.

“We’re trying to be very proactive right now and hope that we can carry on,” Kim said.

At an economic round table discussion Tuesday, Max Dale’s owner Paul Pickering said his business has dropped about 50 percent since freight traffic was rerouted.

“I think the traffic has been so bad through South Burlington Boulevard and Riverside Drive, customers haven’t wanted to get off the road,” Pickering said.

Pam Nelson, owner of Foothills Toyota in Burlington, said her dealership’s business has dropped about 80 percent over the last week, with decreases in service appointments, sales and “walk in” traffic.

“This is historically one of the best months of the year,” Nelson said. “Everyone to the south of us, their sales are up 40 to 50 percent. We’re down, well, around 80 percent. It’s not good.”

In addition to advertising, she said customers are receiving email blasts, texts and phone calls from her staff with information on the best times to come in and alternate routes to the dealership.

Nelson said general anxiety about the roads may be causing more loss of business than actual delays.

“I hope in the next week or so, it will sort of quiet down a bit, and people will get back to work, and shopping and doing what they normally do,” Nelson said.

Meanwhile, local chambers of commerce have been sending out media packets to let potential tourists to the region know about upcoming events and attractions, as well as detour routes to avoid traffic backups.

The Economic Development Association of Skagit County is working with business owners and local chambers to draft a marketing scheme for the region to spread the word that Skagit County is still open and accessible.

The marketing push will be funded by a $150,000 grant from the state Department of Commerce to aid businesses in Skagit, Whatcom, Island and San Juan counties affected by the bridge collapse.

Don Wick, executive director of EDASC, said a public relations agency needed to help craft the plan will hopefully be chosen by the end of next week. He said the Greater Seattle/Tacoma area and lower-mainland British Columbia are likely targets for the marketing materials.

Meanwhile, EDASC, in coordination with area chambers of commerce, is publishing a two-page advertisement in Sunday’s newspaper that includes a map and some tips to help passenger-vehicle only traffic get around more easily.

Potato producers already are done shipping for the season, berry shipments will not really take off until late June, and the fresh market crops like lettuce and tomatoes generally aren’t shipping in large quantities yet, he said.

“If you had to interrupt things, now’s the time to do it,” Shelby said.