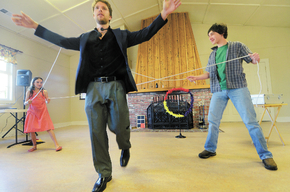 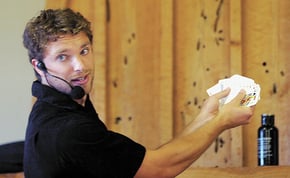 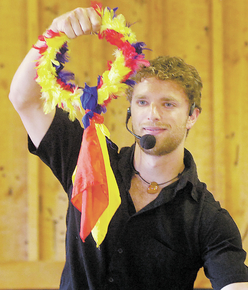 SAMISH ISLAND — Ryan Bart hugged and chatted with about 30 people gathered at the Samish Island community hall on a sunny evening in late June.

He knew everyone — people he grew up with, people who knew him since he was a kid.

He calls them the village that raised him.

Now, at 22, Bart is turning to them for help. He seeks their support in his upcoming humanitarian efforts in Colombia as a Fulbright scholar.

To show what he will do in Colombia, Bart performed a magic show for residents of his hometown.

In addition to teaching English parttime as part of his Fulbright grant, he will work on a side project to expand Magicians Without Borders to Colombia.

Magicians Without Borders is a group that performs magic shows for disadvantaged youths in refugee camps and impoverished rural villages throughout the world, using magic as a means to inspire others.

The group has formed clubs in El Salvador and Mumbai, India, teaching magic tricks to youths as a way of boosting morale.

“It empowers them and gives them confidence in other experiences in their life,” Bart said. “It gives you power in a way, because it allows you to do something other people can’t do.”

Growing up in Samish Island, Bart attended Burlington-Edison High School. As a preteen he began to explore his interest in magic, with the help of his dad’s longtime friend, Steve Taubman, a professional magician who now lives in Burlington, Vermont.

“He was very inquisitive,” Taubman said. “Always an eager and enthusiastic kid, interested in how things are done.”

Taubman gave Bart magic books and taught him some basic tricks. Though it was just a hobby at first, Bart’s family encouraged his pursuit of magic.

“He showed a spark and he seemed to thrive,” said his father, Michael Bart.

In high school, Bart performed magic shows at private and corporate parties. But it wasn’t until he was a student at Gonzaga University in Spokane that magic took on a greater meaning for him. As a premed psychology student, Bart volunteered to perform magic for children at Sacred Heart Children’s Hospital.

“I really learned about the healing power of magic,” he said. “Magic really extends the realm of what we feel is possible. For those who are sick, it really helps with that.”

Parents of the patients would approach him in tears, thanking him for making their children smile for the first time in months.

“That completely changed my philosophy for what magic is about,” Bart said.

He was connected to Magicians Without Borders through Taubman, who has traveled with the organization’s founder, Tom Verner, to El Salvador.

“Magic creates astonishment and astonishment kind of shifts people out of their normal way of thinking,” Taubman said of the group’s work. “It opens them up to new ideas and possibilities and joy, and it kind of awakens their childlike nature. It’s one of the most rewarding, amazing things I’ve ever seen.”

Bart, who spent his sophomore year of college studying in El Salvador, wants to someday practice medicine in Latin America. He sees his upcoming trip — he leaves July 21 — as a way of connecting to the people there.

He applied to the Fulbright grant in October 2011 and found out he won the scholarship in April. He graduated from Gonzaga in June.

Bart has spent much of the summer performing fundraising magic shows throughout Skagit County after his kickoff on Samish Island.

He said he’s “seeping with excitement” for his year-long stint in Colombia.

“I really don’t get that nervous anymore,” Bart said. “I’m going to put my passion in everything I do.”

As an aspiring doctor, he wants to combine magic and medicine in his life’s work.

“There’s healing power in magic and I also believe, in a sense, medicine is magic,” he said.

Bart performed his Samish Island magic show with a beaming smile, beckoning children to help him with his tricks — and grown-ups to donate to his cause.

Though they must have seen his show hundreds of times, his parents, Michael and Liz, grinned throughout the evening.

“It’s awesome to realize that your offspring has grown up to become such a well-rounded human being and want to do good in the world,” Michael Bart said.

Taubman, who has known Bart since birth, said it’s “amazing” to see the child he knew grow into an adult and spread his love of magic.

“I’m so proud of him, it’s so exciting to me,” Taubman said. “He’s not only a talented entertainer, he’s a real humanitarian.”

Same goes for the members of his “village” on Samish Island who watched him grow up.

“I was really impressed,” Samish Island resident Nancy Liggett said after his show. “I’m impressed with his poise, his confidence.”

Liggett found out about Bart’s show through a community newsletter and wanted to help his journey.

“We wanted to support one of our Island kids,” she said.