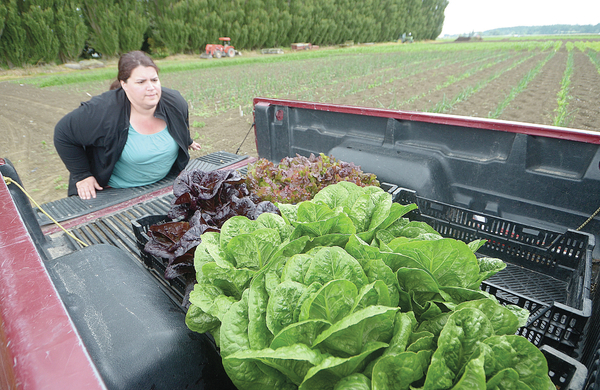 Jen Hart of La Conner Flats farm in Mount Vernon closes the gate on a pickup carrying several trays of freshly-picked lettuce sold to United General Hospital through the food hub website. Before the hub, Hart would have to arrange individual sales and deliveries to sell to institutional buyers. Frank Varga / Skagit Valley Herald 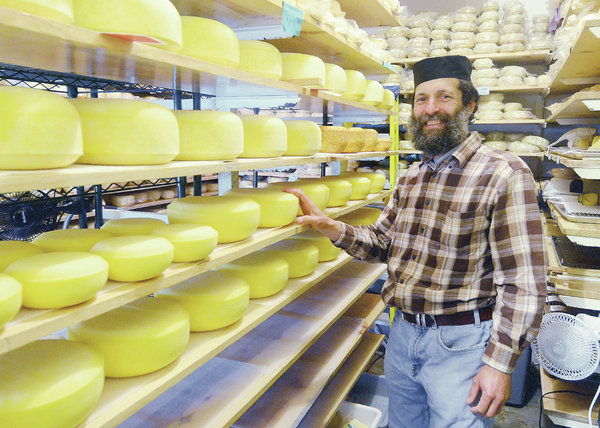 Roger Wechsler stands with some Samish Bay Cheese rounds in the cooler. Wechsler said he recently signed on to sell at the North Sound Food Hub to build his wholesale business. Scott Terrell / Skagit Valley Herald 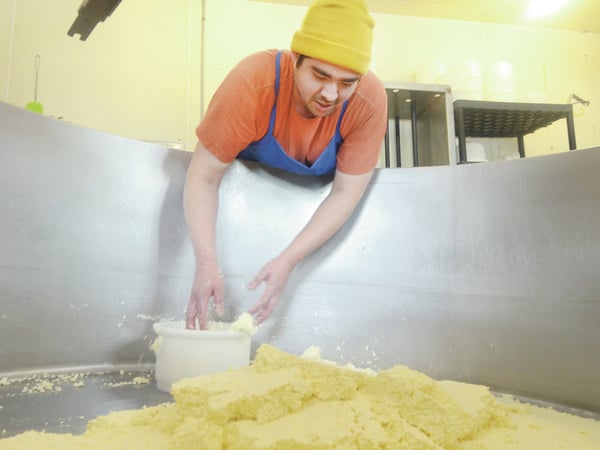 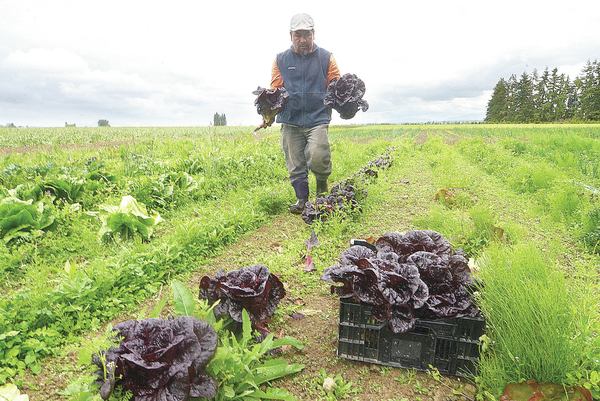 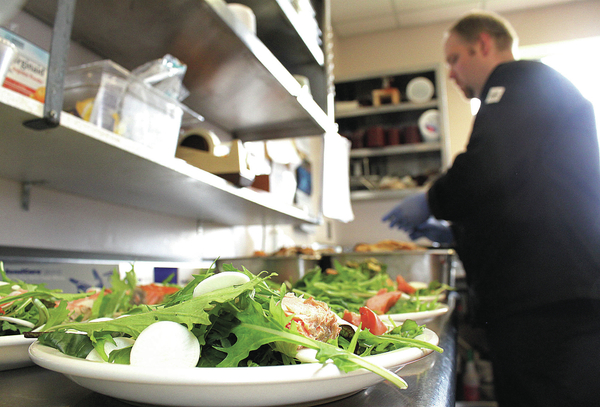 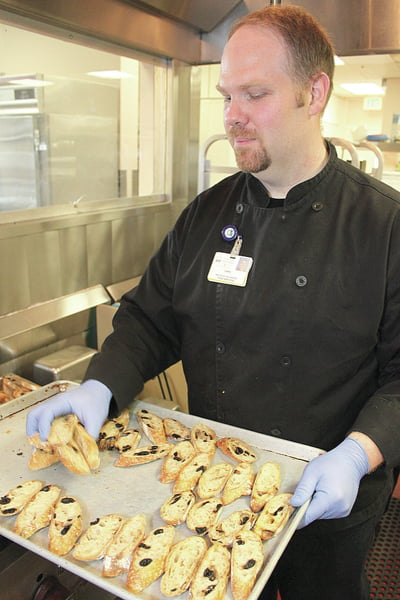 Jen Hart of La Conner Flats farm in Mount Vernon closes the gate on a pickup carrying several trays of freshly-picked lettuce sold to United General Hospital through the food hub website. Before the hub, Hart would have to arrange individual sales and deliveries to sell to institutional buyers. Frank Varga / Skagit Valley Herald

Roger Wechsler stands with some Samish Bay Cheese rounds in the cooler. Wechsler said he recently signed on to sell at the North Sound Food Hub to build his wholesale business. Scott Terrell / Skagit Valley Herald

At La Conner Flats farm in Mount Vernon, Jen Hart, her cousin Matt Mussivand and longtime employee Jacinto Sanchez are growing some of the most beautiful, full-bodied, crisp fresh lettuce around.

The three-employee farm with 10 commercial acres doesn’t have a huge quantity of the lettuce, or any one crop; it specializes in growing a wide variety of produce in small amounts. Hart sells most of it at an on-site market stand. She said she has wanted to expand her wholesale business for years, but faced many obstacles common for small farms.

Meanwhile, Chris Johnson, executive chef at United General Hospital in Sedro-Woolley, wants some lettuce. Not a huge amount — just three boxes for 50 to 60 plates of what he calls the “Best Sandwich Ever,” served at his weekly Farm Fresh Friday lunch.

Johnson said he tries to incorporate fresh, local produce into as much of his menu as possible.

Being able to connect would help both Hart and Johnson. But making that connection has been difficult and costly for both parties.

The North Sound Food Hub hopes to change that by allowing farmers to sell as much of their product as they want to large-scale buyers, and allowing institutional buyers like United General Hospital, the San Juan Island Co-op, restaurants and grocery stores to buy and pick up large quantities of local food in one place.

North Sound officially opened its doors the last week of May at Bow Hill Blueberries in Bow.

The hub could provide more money to farmers and local ingredients in commercially made food while lowering the price of local produce, dairy and meat for consumers, said Lucy Norris, coordinator of the food hub for the Northwest Agricultural Business Center (NABC) in Mount Vernon.

Small farms are the backbone of Skagit County agriculture.

“Compared to the rest of the country, and even the east side (of the state), our farms are not large. Even the larger ones aren’t large,” said David Bauermeister, NABC executive director.

Hart would like to sell at area farmers markets. But with only three employees, spending a full weekend at a market could be more expensive than profitable, and competition is fierce.

“The farmers markets were already saturated, especially with fresh vegetables and small farms. And a lot of the fees that go into farmers markets can be a little prohibitive,” Hart said.

Most small farms can’t meet the requirements to sell to a large distributor, either, Bauermeister said.

Selling directly to large buyers in bulk allows farmers to set their own price, but comes with another set of challenges, Norris said. Farmers first have to connect and build relationships with buyers, which can be difficult.

Then farmers usually email or fax “fresh sheets,” detailing how much of what crop is available, to their potential customers every week. Sales are made over the phone with each buyer.

“Farmers have to deliver all that, by themselves, to all their customers. You spend the whole day in your truck running those orders around or hire somebody to do that,” Norris said.

Johnson said direct sales also can cause problems for buyers. Deliveries made on a farmer’s schedule don’t always coincide with his production schedule, and picking up produce from the farm takes a large chunk out of his workday, he said.

“It can work for a little while, but over a long period of time, that’s not a sustainable solution,” Johnson said.

The North Sound Food Hub proposes a better way to do business.

The hub offers a cold-storage area where farmers can drop off fresh vegetables, dairy and meat products in a central location, and large institutional buyers can pick them up at their convenience.

Integral to the viability of the hub is a website where farmers can log on at the beginning of each week and let buyers know what they have, how much is available, and how much it will cost. This replaces the “fresh sheets” farmers have been sending out every week to buyers.

Norris said farmers can upload pictures of their produce and include descriptions, as well as set minimum quantities or purchase amounts to make their delivery to the hub worth the trip.

“The system really works to the farmers’ advantage, if they know how to work it,” Norris said, noting that she is working with less tech-savvy farmers to help promote their wares.

Buyers log on to the website, sort by farm or kind of food, put items into their “cart,” and pay for the whole purchase with a card or purchase order. Farms are paid directly, and farmers have 24 hours to get their goods to the hub, where the buyer picks them up.

Local farms can reach out to lucrative Seattle restaurants and customers through a weekly delivery to 21 Acres Food Hub, a partnering food hub in Woodinville the NABC helped to establish.

Farms of any size can post whatever they want to sell on any given week, Norris said.

“Even if you only have a couple of cases per season, you can sell that here. You can diversify your customer base instead of putting all your eggs in one basket,” Norris said.

Norris said 84 combined sellers signed onto the website so far have access to 65 buyers, including those linked to the 21 Acres site.

History of a hub

The North Sound Food Hub represents the culmination of three years of work by Norris and the NABC to facilitate easier transactions between local farmers and large-scale buyers.

In June 2010, the Skagit Wholesale Market opened in the Skagit Valley Food Co-op parking lot. It was unfunded, but for two hours every week for 15 weeks, farmers showed up with what they had, and larger buyers like Johnson could purchase what was available.

The market returned the following year for five weeks, but Norris said that time off the farm and the static schedule for businesses limited the project’s possibility for expansion.

The markets were a huge step in the right direction by offering wholesale quantities and prices, but still had limitations, Johnson said.

“It was hard to get everything you needed. Something sells out before you get there, or a farmer’s not able to get to the drop site,” Johnson said, referencing the parking-lot setup.

Last year, NABC received a $300,000 value-added producer grant from the Department of Agriculture to fund work on the food hub project through 2014, Norris said. The website, run by Local Orbit in Michigan, was brought into the fold and helped connect farmers directly to buyers.

The website gave a bigger inventory, but spending two to three hours away from his kitchen to pick produce up from farms was untenable, Johnson said.

This year the final piece of the puzzle — cold storage — was added. Harley and Susan Soltes, owners of Bow Hill Blueberries, offered up the unused 20-foot by 24-foot cold storage facility at their farm to serve as a central storage and distribution center.

Located an easy five-minute drive from Interstate 5 and accessible from backroads that bypass the collapsed Skagit River Bridge, the spot seems workable for buyers and sellers in Whatcom, Skagit and San Juan counties.

A helping hand for farmers

This week, three boxes of lettuce from Hart’s farm were harvested by Sanchez, cleaned by Hart and dropped off at the North Sound Food Hub.

Johnson picked the food up Thursday to incorporate into his Farm Fresh Friday menu.

Hart can manage her inventory at the hub weekly online while manning her farm’s fresh market stand. Being able to offer pictures and descriptions of her unique offerings was a boon as well, she said.

Roger Wechsler, co-owner of Samish Bay Cheese in Bow, said the farm started out selling cheese, milk and dairy products at farmers markets. But he wants to move more into wholesale to cut down on the labor costs involved in staffing a booth.

“We’re looking for new outlets to sell our products, and this offers an opportunity we think would be good,” Wechsler said. “This organization has done a great job signing up different buyers — day care centers, preschools, hospitals — people we didn’t have any way to approach.”

Norris said the grant allows for minimal fees from farmers this year by paying her wages and running the website. But she said the hub needs to sell approximately $200,000 per year to run itself without NABC intervention.

According to estimates by Washington State University’s Skagit County Extension, the county sold a total of $220 million per year in crops, dairy and livestock (not all livestock is eaten) in 2011.

Norris said farmers and buyers should get on board now, while the grant is paying the bills, to get the project off the ground and running on its own.

However, if the idea is successful, she said it could reduce costs for businesses to feature fresh, local food because they are buying directly from the farmers.

“The only reason (local food) is expensive is because farmers are bearing every expense to bring that good to market,” Norris said. “Do we all eat? Of course. That’s the demand for this.”