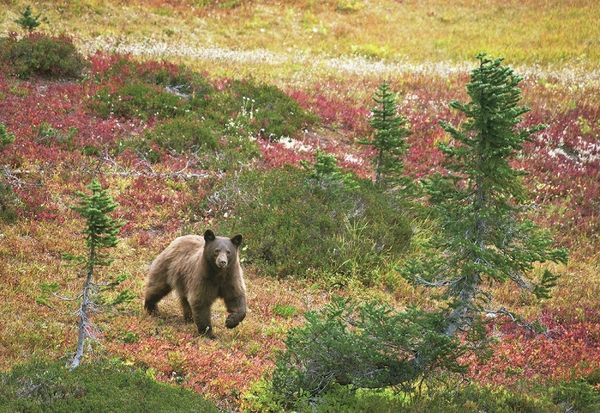 A black bear makes its way near Maple Pass in the North Cascades. Photo by Brett Baunton 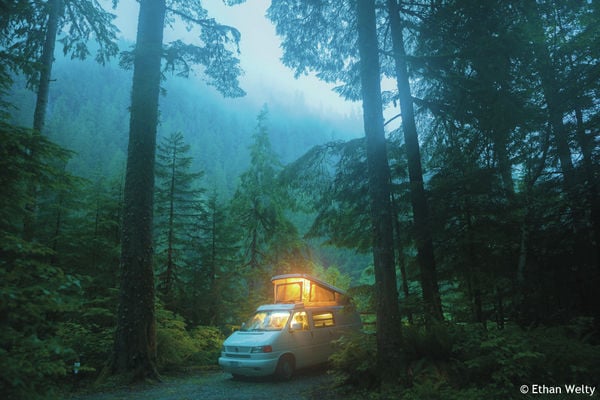 A Volkswagen Eurovan camper glows at night in the Mineral Park Campground along the Cascade River in Mount Baker-Snoqualmie National Forest. Photo by Ethan Welty 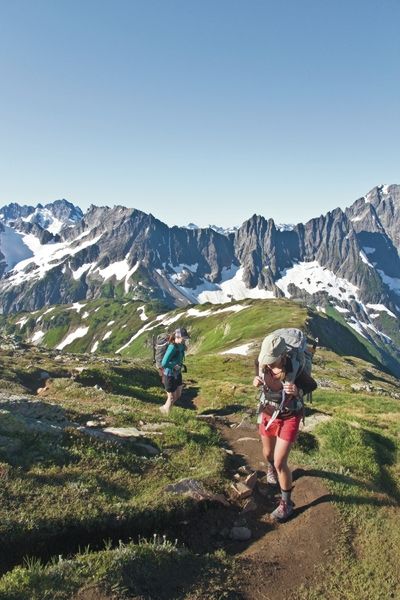 A black bear makes its way near Maple Pass in the North Cascades. Photo by Brett Baunton

A Volkswagen Eurovan camper glows at night in the Mineral Park Campground along the Cascade River in Mount Baker-Snoqualmie National Forest. Photo by Ethan Welty

You would learn of the area’s history, traverse its trails and hear from those who not only work and recreate in the North Cascades, but push for its conservation and protection. It would be an adventure full of fresh air and fresh insight.

It can now be undertaken by simply opening the pages of “The North Cascades: Finding Beauty and Renewal in the Wild Nearby.”

Braided River, the conservation program within Mountaineers Books, published the book on the 50th anniversary of the landmark Wilderness Act and enlisted the services of Dietrich, Romano, Martin and others to bring the North Cascades to life through words and photographs.

The book was written to spur on readers to venture into the North Cascades, to form their own opinions, write their own stories and take their own pictures.

And all the while to decide just what steps are necessary for future generations to have the opportunities to write their own memoirs of the North Cascades.

“The North Cascades are truly a hidden gem,” said Martin. “On one hand, you want to keep it that way. However, on the other, you have to get the word out in order to raise awareness. We want to get this book into the hands of people who want to learn more.”

The project, which took two years to complete, was built on the foundation of “The North Cascades,” a black and white coffee table book published in 1964 by Mountaineers Books was a way to illustrate the need for protection of a little-known area known as the North Cascades. Four years later, President Lyndon B. Johnson signed the bill that created North Cascades National Park.

Now Dietrich, Romano and Martin have brought their areas of expertise to a project that brings the North Cascades into clearer focus.

“I went into the front end of this project not really knowing what the end of the project would be,” said Dietrich. “Plus, I wasn’t really sure about the idea of a group project when I was first approached. I’m a novelist, which tends to be very solitary. As it turned out, working with other folks was fun once we had a clear definition of what was expected. There was a good division of labor and we were able to get into our subject matter as a whole.”

Dietrich takes readers on an imaginary hike through the region. He explains the rich history and the challenges facing the remote yet accessible ecosystem.

He starts with a personal adventure, that of climbing Mount Baker with his wife. He said while the story wasn’t life-changing or traumatic, it did provide him with a feeling of personal connection. It also gave him starting point for a story that is nowhere near its end.

“There really is no definition for the North Cascades,” said Dietrich. “Its ecosystem is so vast and variable. The big picture is exactly that, even for someone who has studied the place. I studied it just to try and get some perspective. I now have a shelf full of books I have been cribbing for information.”

Romano has trekked countless miles through the North Cascades while researching guidebooks on the trails that lead from valleys to peaks.

“I was recruited to help people get out and explore and experience this vast and unique ecosystem,” said Romano. “That was my role in the book. I hope this book serves as an invitation for folks from all walks of life to explore this incredible landscape in our backyard and reconnect to nature and be motivated to help protect it.”

Martin puts names, faces and voices to the North Cascades, profiling those who have a vested interest in the area, and those who have helped shape the region.

“I get to tell the story through profiles of people,” said Martin. “People who show the real value of the ecosystem, beyond mining and hydropower. Through scientific exploration, recreation. We include a lot of thoughts from a lot of different people who have a definite connection to the area. And those connections are big and small. It’s about inspiring others to get involved.”

The book’s photography is impressive. The North Cascades are seen through the lenses of about 20 leading nature photographers from the Pacific Northwest.

“This book is going to sell itself,” said Dietrich. “It really all came together. We hope it inspires others to get involved with the stewardship of the North Cascades. This book doesn’t serve any one agenda, rather it opens the North Cascades up to some very important discussion while working with a lot of different folks.”

Romano offered his opinion on what he hopes the book accomplishes.

“I hope the book instills a renewal in interest in the North Cascades for longtime residents and helps introduce this amazing area to new residents,” he said. “I hope it calls to attention how special this area is, a fairly intact, wild and large ecosystem, and how on the fringes of two major metropolitan areas it creates both a refuge for folks to have a wilderness experience and creates challenges to protect it and manage it wisely.”

Celebrate the release of “The North Cascades: Finding Beauty and Renewal in the Wild Nearby”…