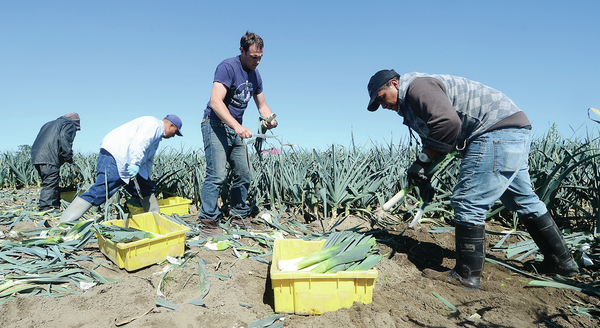 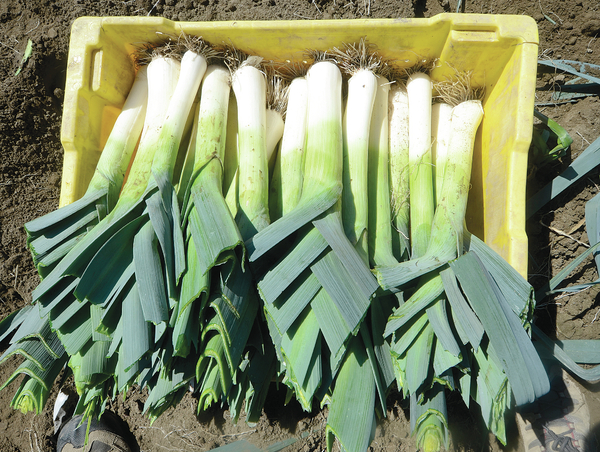 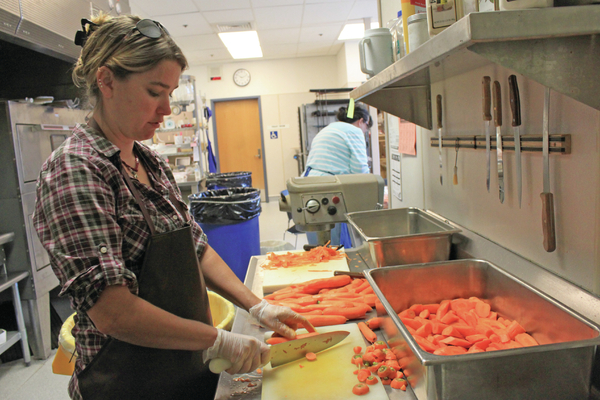 Brandie Wyles chops some of the 80 pounds of fresh, locally-grown carrots that were served raw Friday at La Conner schools. La Conner Food Service Director Georgia Johnson said one of the biggest challenges for schools using local produce is the time and training needed by staff to prepare farm-fresh ingredients for large numbers of student lunches. 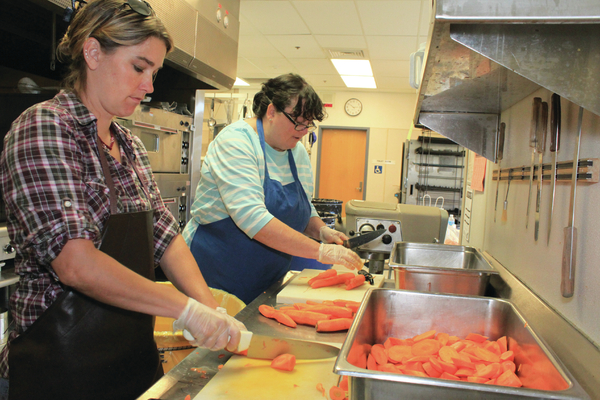 Brandie Wyles, right, and Georgia Johnson chop some of the 80 pounds of fresh, locally-grown carrots that were served raw Friday at La Conner schools. Johnson said one of the biggest challenges for schools using local produce is the time and training needed by staff to prepare farm-fresh ingredients for large numbers of student lunches.

Brandie Wyles chops some of the 80 pounds of fresh, locally-grown carrots that were served raw Friday at La Conner schools. La Conner Food Service Director Georgia Johnson said one of the biggest challenges for schools using local produce is the time and training needed by staff to prepare farm-fresh ingredients for large numbers of student lunches.

Brandie Wyles, right, and Georgia Johnson chop some of the 80 pounds of fresh, locally-grown carrots that were served raw Friday at La Conner schools. Johnson said one of the biggest challenges for schools using local produce is the time and training needed by staff to prepare farm-fresh ingredients for large numbers of student lunches.

Ralph’s Greenhouse, a large wholesale grower of carrots, potatoes, spinach and a variety of other fresh vegetables, is just three turns and 3.4 miles away from Washington Elementary School in west Mount Vernon.

Despite the close proximity of Skagit County’s seven school districts to scores of local farms and ranches, between 50 to 60 percent of the food that students eat comes from national food service agencies. This year schools will be required by the U.S. Department of Agriculture to offer a larger variety of fruits and vegetables to boost nutrition in lunches, but only 5 cents per meal will be added in reimbursement for locally sourced food.

Much of the food available through the services is processed, prepackaged and not so nutritious, said Georgia Johnson, La Conner School District food services director.

“It’s a super-processed food,” Johnson said. “And we know that the more processed a food is, the further away it is from what our body is used to and what is natural for us.”

The majority of fruits and vegetables used by local schools are ordered through Duck Delivery, a regional distributor sourcing from farms and processing plants across Washington and Oregon, shipped to Sumner and delivered three times a week.

“But my ideal is schools purchasing directly from farmers, because then the farmer gets full value for their product and it doesn’t go through a broker,” Gray said in an email.

Her organization’s program, Fresh Food in Schools, aims to create a mutually beneficial relationship between schools and farmers, bringing fresh, local produce to students and strengthening the local economy.

But progress is slow, and schools and farmers face a long list of challenges, including problems on both ends with processing and distribution, increased cost and convincing kids that they should eat a carrot instead of a corn dog.

Johnson’s locally sourced food program is making the most progress among schools in Skagit County, buying 10 to 20 percent of her ingredients and products from local farms.

One of the biggest problems schools face, she said, is processing; making sure products coming in from the farm can be efficiently put into recipes or onto trays and salad bars. She said she visited farms personally to form relationships with farmers, asking for certain sizes and shapes of vegetables.

Although the school’s employees are great cooks, Johnson said they lack the training and equipment necessary to clean, prep and cook large quantities of raw materials.

Many districts require suppliers to have high levels of insurance, as well as food-handling certifications that push smaller farms out of the picture.

The Fresh Food in Schools Project works to make a connection between local farms and school cafeterias, and is coordinating with 20 school districts across the state on the issue.

“I am basically an ambassador of Washington-grown produce,” said Acacia Larson, a coordinator with the project who works with districts in western Washington, including the Mount Vernon School District.

David Connors, Mount Vernon School District food services director, said the beauty of having a coordinator like Larson is exposure to multiple school districts trying to bring more local food to students. Those new ideas help get school districts out of recipe ruts, he said.

“Honestly, I wouldn’t have the time to just start talking to other districts and figure out what they’re doing,” he said. “There’s just not time in the day.”

Larson also talks to the farmers, helping Connors identify growers and products he could use in the cafeteria, and helping tune his menu to the seasons.

“One barrier is what is grown here isn’t necessarily on a kid’s top-10 list for dinner,” Connors said. “… We try to expose it to them to try it and say, hey, it’s grown here right across the river.”

Connors has tried various methods to introduce healthier, sometimes foreign foods to the students. One sneaky try with kale turned spaghetti sauce green; another with black bean dip created a competition between kids for who could make the dip turn a weirder color. The interaction between the unrinsed black beans, salsa and sour cream had turned the dip a sickly purple.

“It’s always an eye-opener,” Connors said of introducing different foods. “Try it as an experiment before feeding it to 3,000 kids.”

One unlikely winner was butternut squash with cranberries. The key, Connors said, was to involve the kids in the process, allowing them to taste-test the recipe.

“We are so concerned with ‘We can’t take that off the menu because the kids will revolt,’” Larson said. “They are pretty open to trying new things if you make them fun.”

The Washington Sustainable Food and Farming Network seeks grants to continue the Fresh Food in Schools project, which is reaching the end of its three-year grant.

Hopefully it will continue, Gray said, but that’s assuming the program in its current incarnation is making a difference.

“Success is a garden at every school across the state,” Gray wrote in an email. “And a fruit and vegetable bar in every school stocked with fresh, seasonal produce grown in Washington.”

Success, she added, has not been achieved.

Despite the challenges, there’s good news, she added.

Arlington School District has worked with the Fresh Food in Schools project for two years, but food services director Ed Aylesworth emphasized that the effort has just begun. Last year, he purchased some local foods on a small scale and put out the word this year that he’s looking for local vendors.

The mandate allows the district to purchase locally grown foods that cost slightly more than other products, or 5 percent within the lowest quote for local growers and 3 percent for those in Washington state.

Tim Terpstra, manager of Ralph’s Greenhouse, has been on the board of the Farm to Schools program in Mount Vernon School District since 2008. Since then, he has sold only $3,500 of fresh carrots, leeks, potatoes, spinach and kale to the district — a fraction of what the farm sells daily at wholesale.

“From our end, it’s not like, ‘Dear God, we’re going to make lots of money selling a few boxes of potatoes. We do it because we want to help the community,’” Terpstra said.

“How is it going to get to me?” she said she asks herself. “… that’s my dilemma. How am I going to get it here, because I don’t have someone I can send to go get it.”

She has considered piggy-backing on any fresh local produce delivered to Island Hospital, but for now she gets nearly all her produce through Duck Delivery.

Terpstra said a regional food hub would have to be built where farmers could drop off their produce, schools could quickly and easily order what they need, and distribution could be in bulk and shared by schools for local farms to really profit in selling to schools.

But he said being able to inspire pride in kids for their friends and relatives who are agricultural producers in Skagit County makes current setbacks worth the trouble.

“The agriculture of Skagit Valley is a very important part of the character of the valley,” Terpstra said. “A lot of kids are going to school, and they have parents, uncles and friends who are producing this food, and they should be proud of that. The idea that, ‘My dad works on the farm that these potatoes are from,’ that’s important.”