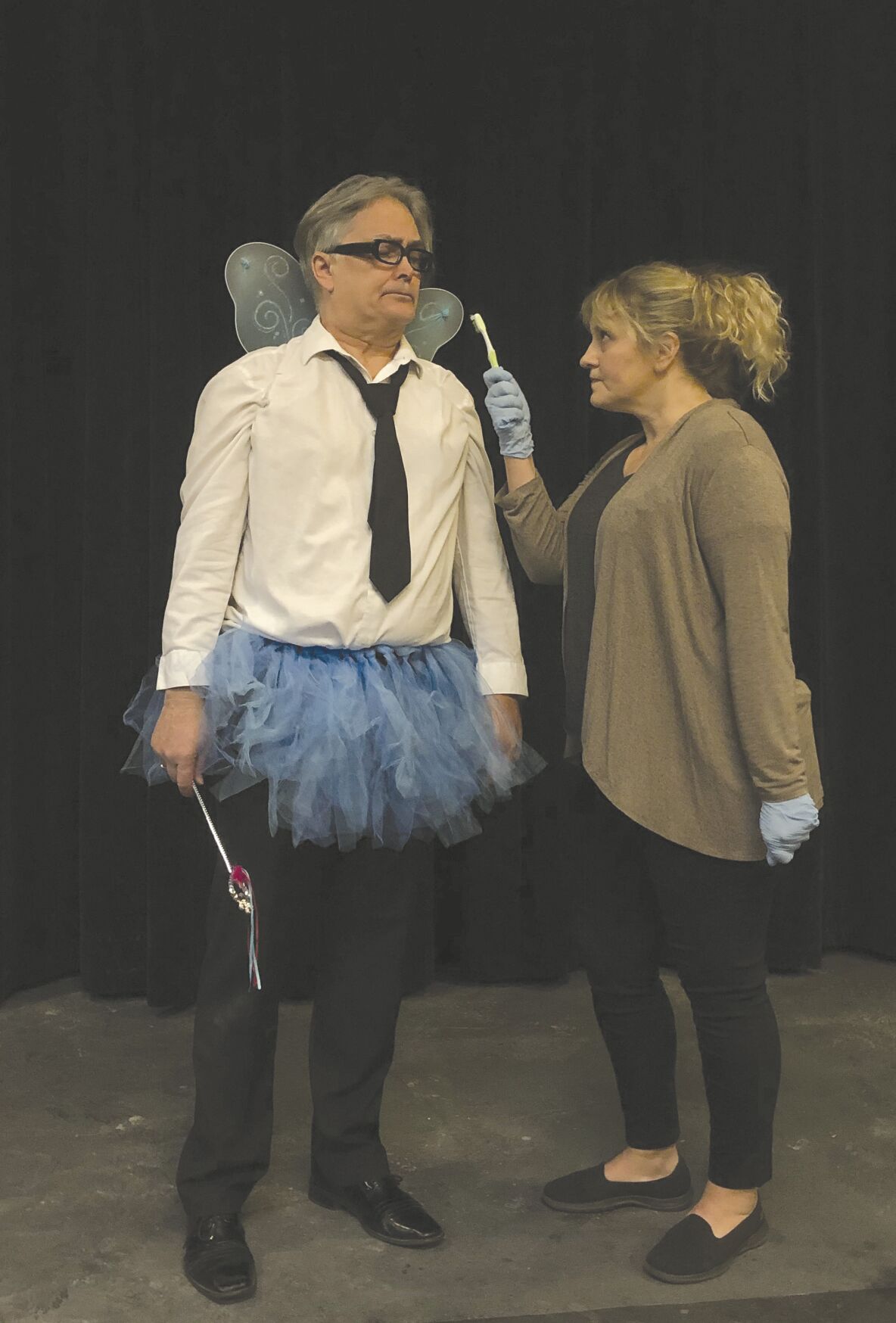 Shelby (Carla Hurst) receives a visit from the Grout Fairy (Brian Hurst) in one of the 10-minute plays in Anacortes Community Theatre’s upcoming production “Thank You, 10.” The virtual production, featuring several couples and families as its cast, opens Friday 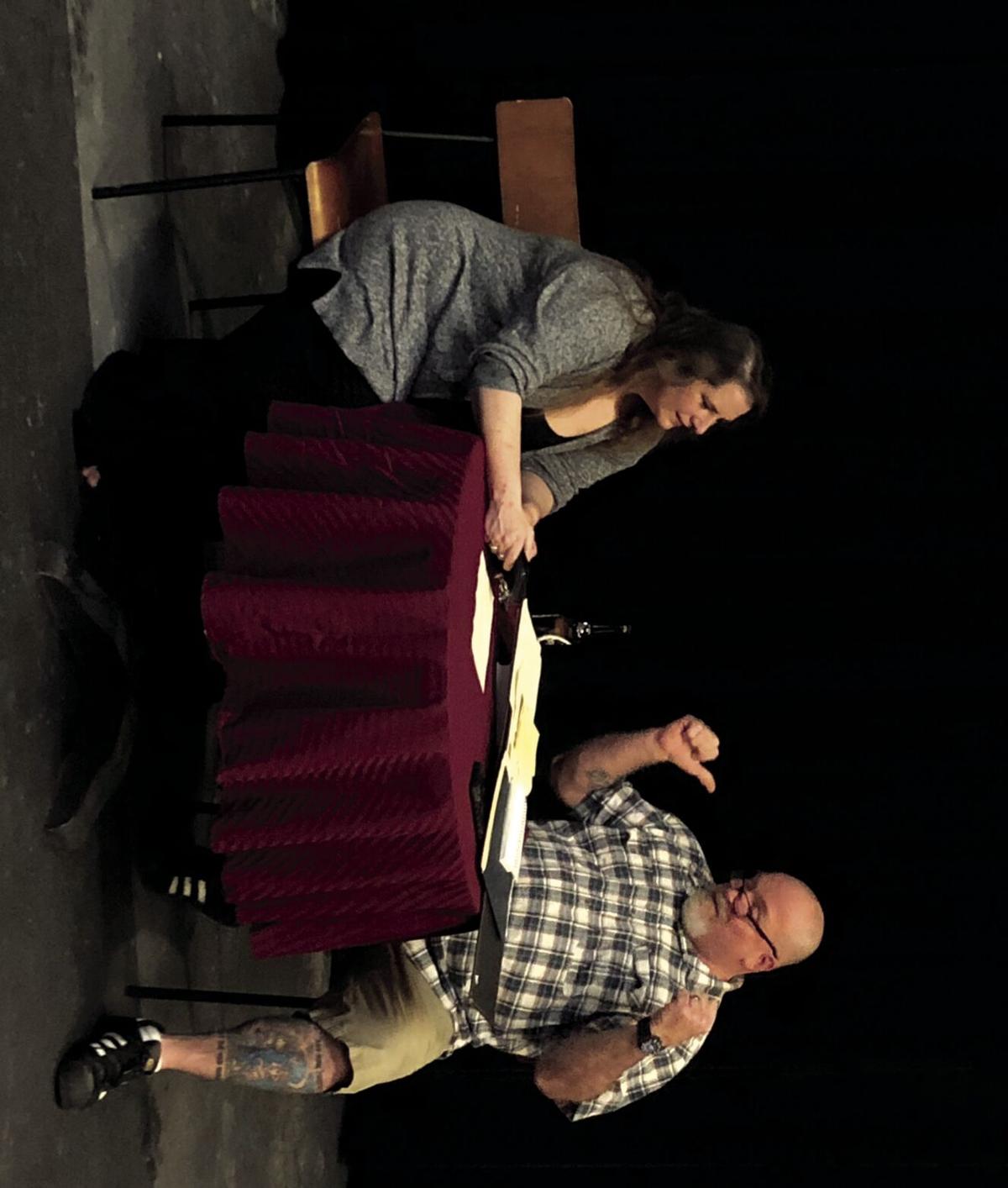 Carolyn Travis and Trey Hatch perform in “Mom’s Poetry Book” earlier this month. Each cast for the production performed on stage with just one other person in the theater to run the camera.

Shelby (Carla Hurst) receives a visit from the Grout Fairy (Brian Hurst) in one of the 10-minute plays in Anacortes Community Theatre’s upcoming production “Thank You, 10.” The virtual production, featuring several couples and families as its cast, opens Friday

Carolyn Travis and Trey Hatch perform in “Mom’s Poetry Book” earlier this month. Each cast for the production performed on stage with just one other person in the theater to run the camera.

The Anacortes Community Theatre has made it clear: It takes more than a pandemic to stop local theater.

This weekend ACT is bringing nine 10-minute plays to its stage, and the audience can watch safely from their home screens. The show is called “Thank You 10,” and features short plays on a variety of topics.

Director Willow McLaughlin has rehearsed the plays with the actors over video chat to help them stage the material in their own home before taping it in the theater.

“It’s been really interesting,” she said. “It’s very helpful that these are very short scripts, just 10 minutes at a time, so it felt doable with the rehearsals that we had over Zoom.”

When ACT decided to stage a 10-minute play festival, it put out a call to playwrites to submit scripts. The theater received entries from as far away as New Zealand. Of the 90-plus entries submitted, nine were selected in a blind reading to make it to the stage, including two from Anacortes playwrites.

“It was cool that even though nobody knew who any of the writers were that still a couple local authors were picked,” McLaughlin said.

The next step was for local actors to send in virtual audition tapes, but there was a catch: To practice the material and follow social distancing guidelines, actors had to live in the same household. That condition led to more family involvement, be it between couples or parents and children.

“It was really interesting because we called for auditions, and I think people aren’t quite used to auditioning that way and realized it was a great opportunity, so we got mostly married couples and families,” she said.

When it was time to tape the plays, McLaughlin combined the dress rehearsal onstage with the actual taping to limit in-person time in the theater together. The goal in taping each play is to bring as much of the familiar ACT experience to the audiences’ house as possible.

“We want the experience to feel like you’re sitting in our audience, looking at our stage — maybe with better seats than you usually get,” she said. “It feels like the real thing, even though you know it’s not.”

The plays are appropriate for all ages, and the show at large has something in it for everyone, she said.

“It’s a really cool combination of things. We have a couple that are just fun and funny,” she said, like a play about the intentions of a visit from a fairy godmother. There is also a historical play set in World War II. “And then a couple that are just real interesting, thought provoking ones about decisions that we make in life. A full range.”

The production premiers online on Friday and continues until Aug. 22. The video is available from 5:30 to 10:30 p.m. for evening shows and from noon to 5 p.m. for matinees. After purchasing a ticket online, viewers visit www.acttheatre.com/virtual-production to stream the show within the allotted time window for their showing.