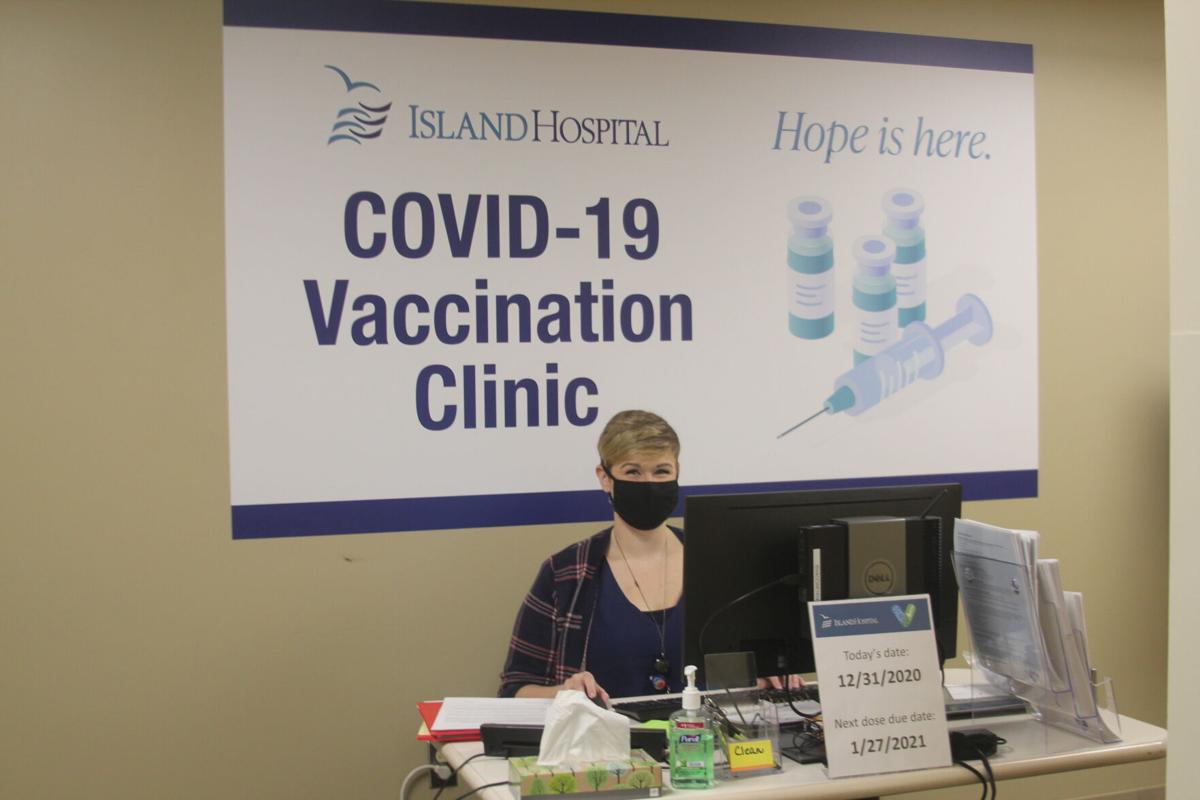 Island Hospital's vaccine clinic is in a conference room in the lower level near the main entrance. Those receiving the vaccine will need to be screened for symptoms before entering the building.

Island Hospital's vaccine clinic is in a conference room in the lower level near the main entrance. Those receiving the vaccine will need to be screened for symptoms before entering the building.

One year after the first case of COVID-19 was detected in Skagit County, prompting safety measures never before seen, vaccines are arriving, albeit slowly, showing a glimpse of hope toward easing the pandemic’s hold on the world.

The first reported case was announced on March 10, 2020, just after an emergency declaration by Skagit County. The virus was already spreading in Snohomish County, and many were sick at the Josephine Caring Community, just the first of many area nursing homes to be struck with the virus.

Island Hospital set up an emergency overflow tent in preparation and canceled elective procedures. The Anacortes School District canceled sports and activities for one month, eventually canceling classes for six weeks on March 18. The Anacortes Senior Activity Center was closed indefinitely. Big changes were needed, but no one knew for how long.

“I had no concept of how long it would last, but I was in good company — none of us understood,” Mayor Laurie Gere said Tuesday.

In the months that followed, there would be no fast return to normal. Schools went fully remote in the fall to start the new year and are only now returning all students to school buildings — in shifts. Businesses are still restricted in customer capacity, masks are still required everywhere, and people are still dying.

“The loss of life, the loss of income, there’s been so much loss,” Gere said.

There has also been frustration among residents and officials aiming to help them. But there is also hope.

This is the first week in a while that Anacortes has something to celebrate regarding vaccine distribution as frustration has grown among residents who are eligible for the shots but cannot find them.

Demand has been much higher than the supply.

The vaccine began rollout in January, but this Monday was the first allotment for Island Hospital in four weeks, despite repeated requests.

That came after a push from local authorities who were asked to help make the case by hospital CEO Charles Hall. He asked the state for increased transparency and clarity in the distribution process and called on local leaders and legislators to help advocate for shipments.

Island Hospital did receive 800 doses of the single-dose Johnson & Johnson COVID-19 vaccine this week, the third vaccine brand to be approved in the nation. This latest vaccine received emergency approval at the end of February, joining the first two — produced by Pfizer and Moderna.

But as of Monday, Hall said he remains disappointed with the response he’s received at meetings with the Governor’s Office and the state Department of Health, receiving no promises for better allotment. He noted that the Anacortes area has a higher proportion of people ages 65 and older, and the low allotment so far is unacceptable.

Mayor Gere and Council member Anthony Young also met with state officials, and Gere said she hoped the latest allotment is a sign that it will continue.

Hall is fully confident in the efficacy of the new Johnson & Johnson vaccine and said the “best vaccine is the one that’s available.”

The hospital is also going through its database of established patients to make sure that people of color, people with disabilities and those lacking internet access have an opportunity for an appointment, as well, Hall said.

The hospital will begin to vaccinate local educators and childcare providers today, as Gov. Jay Inslee moved them into phase 1B-1 qualifications last week.

“I’m proud of our team for their continued efforts against the pandemic. We’re optimistic for the future, and we’re committed to seeing this through,” Hall said.

A variant of COVID-19 first detected in the United Kingdom has been found in Skagit County, county public health announced last week.

The county resident who tested positive had not traveled prior to getting the virus and is now working with contact tracers to help prevent spread.

“We should assume that this variant is circulating widely in Skagit at this time,” Skagit Public Health Director Jennifer Johnson said last week. The variant had already been found in Whatcom, Island and Snohomish counties.

The same preventative measures apply to stopping the spread of the variant — masks, hygiene and social distancing. Health officials also urge people to get vaccinated when they can. The vaccines are still effective against the new strain.

Though the retail and restaurant industry was hit hard throughout the past year, the economy as a whole has done “remarkably well,” Gere said. Sales tax revenues were above those of a year ago, she said.

Much of the city’s business was moved online, and some efficiencies were found in the planning and design process. Gere said that mayors throughout the county have been meeting weekly, building stronger relationships than before.

President Joe Biden has announced that enough vaccine for every American may be produced by the end of May. Getting it into arms is the biggest hope for protecting public health and helping the economy recover.

The state recently hit its goal of administering an average of 45,000 doses per day, mostly through state-run mass vaccination sites, the nearest of which is in Wenatchee. Two million first and second doses have been given in total throughout the state.

State officials have also announced that on March 22, Phase 1B-2 will begin. It will include critical workers in congregate settings such as agricultural workers, fishing vessel crews, food processors, grocery store workers, prison and detention center workers, public transit and any first responders not already eligible.

It will also include people over age 16 who are pregnant or have a disability.

The Centers for Disease Control and Prevention has released guidance outlining what activities for activities people can do safely, two weeks after becoming fully vaccinated.

Vaccinated people can safely gather indoors without a mask and visit others who are not vaccinated, so long as the unvaccinated are not at increased risk for severe illness from COVID-19. Vaccinated people also do not need to get tested or quarantined after a possible exposure, so long as symptoms do not develop.

The CDC continues to advise wearing a mask in public, and avoiding gathering in medium to large groups, visiting people at-risk for severe illness and unnecessary travel, even after vaccination.

“We have weathered an incredible storm. I think we are coming out on the other side,” Gere said.