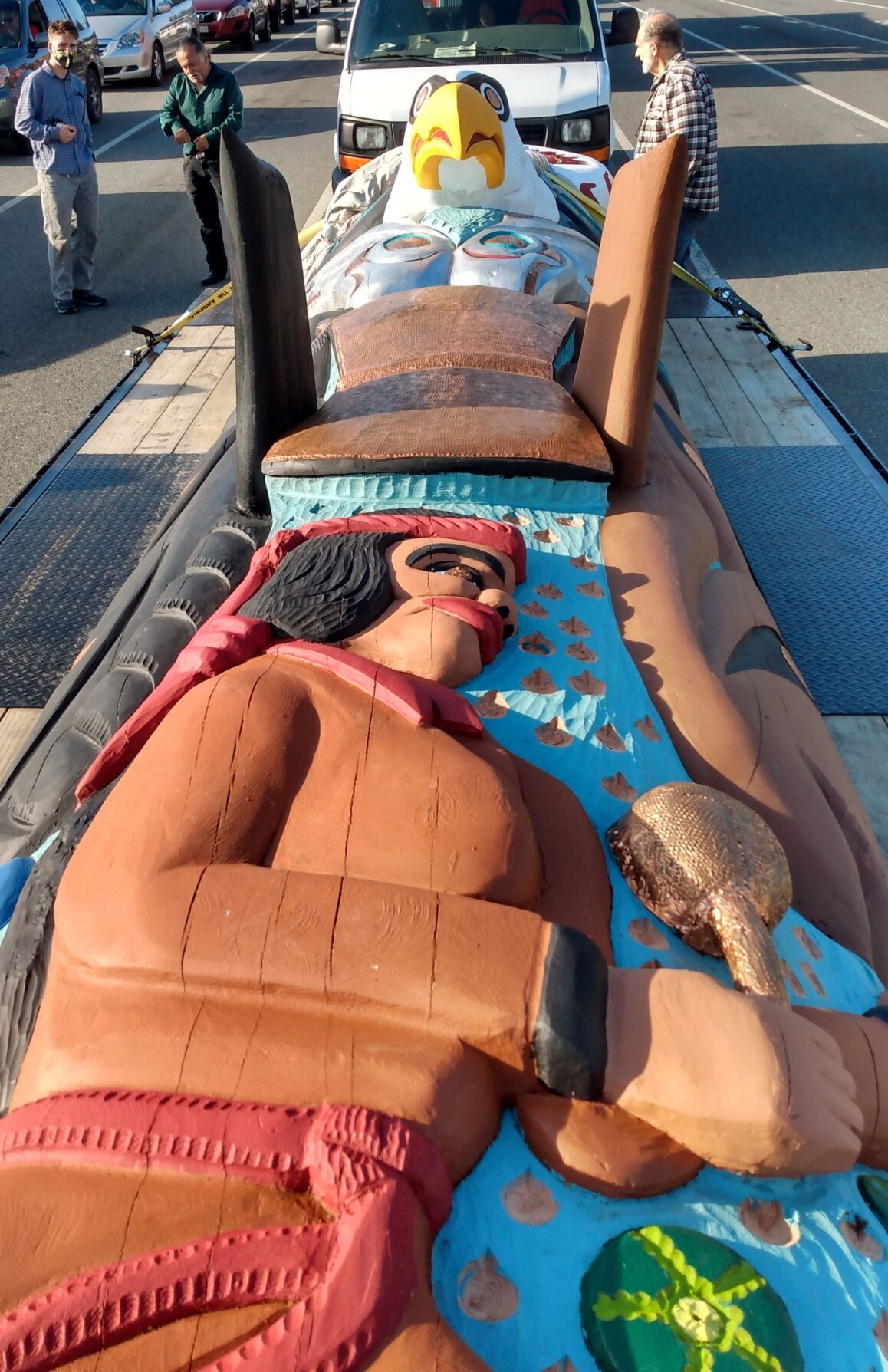 Buy Now
A 25-foot Healing Pole, carved by the Lummi Nation's House of Tears Carvers as a call to protect sacred places, was taken Monday to San Juan Island as part of a nationwide journey that will end in Washington, D.C. (Richard Walker / Anacortes  American) 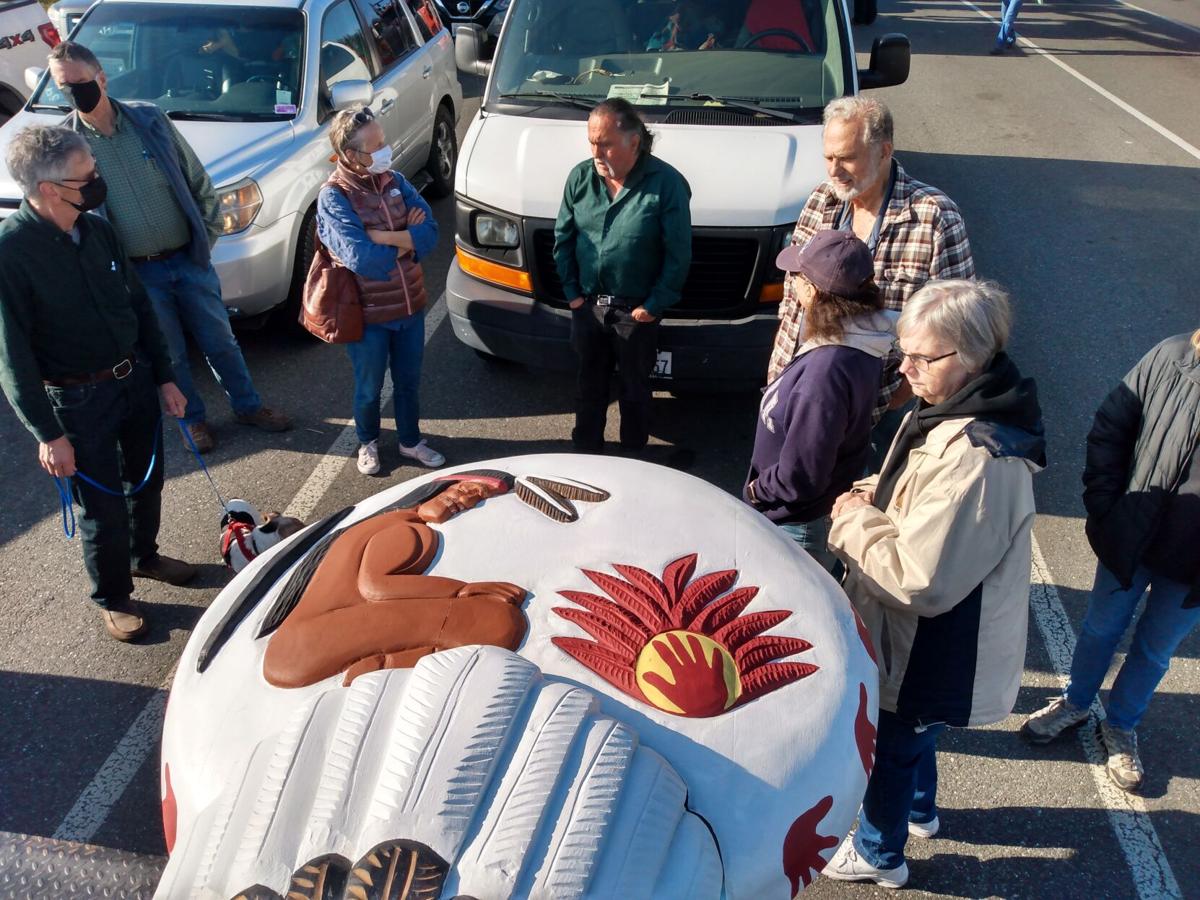 ummi Nation carver Jewell James talks to visitors Monday at the Anacortes ferry terminal about the healing pole he was taking to San Juan Island as part of a nationwide journey that will end in Washington, D.C. (Richard Walker / Anacortes American) 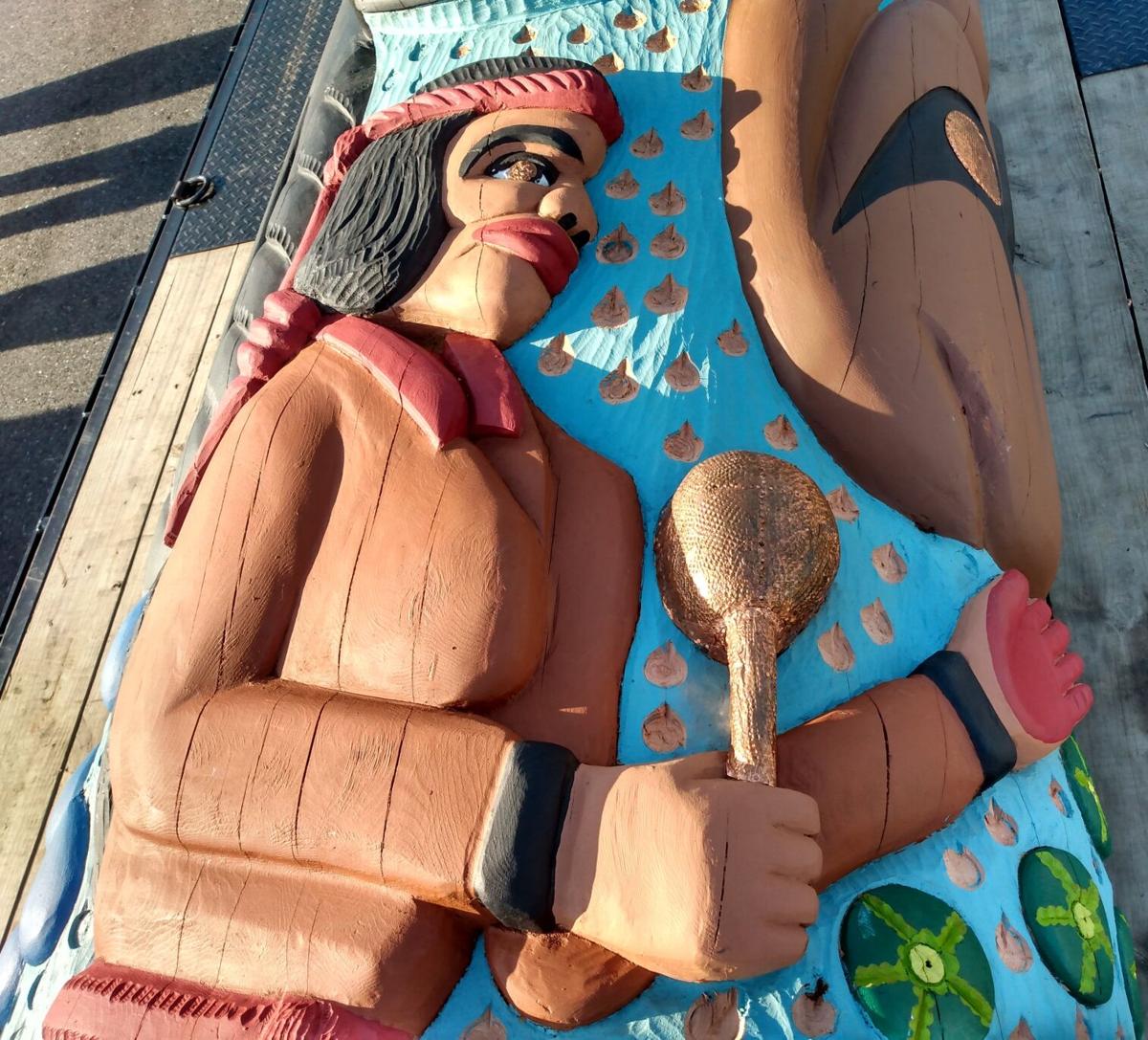 Detail from the 25-foot Healing Pole that was taken Monday to San Juan Island as part of a nationwide journey that will end in Washington, D.C. (Richard Walker / Anacortes  American) 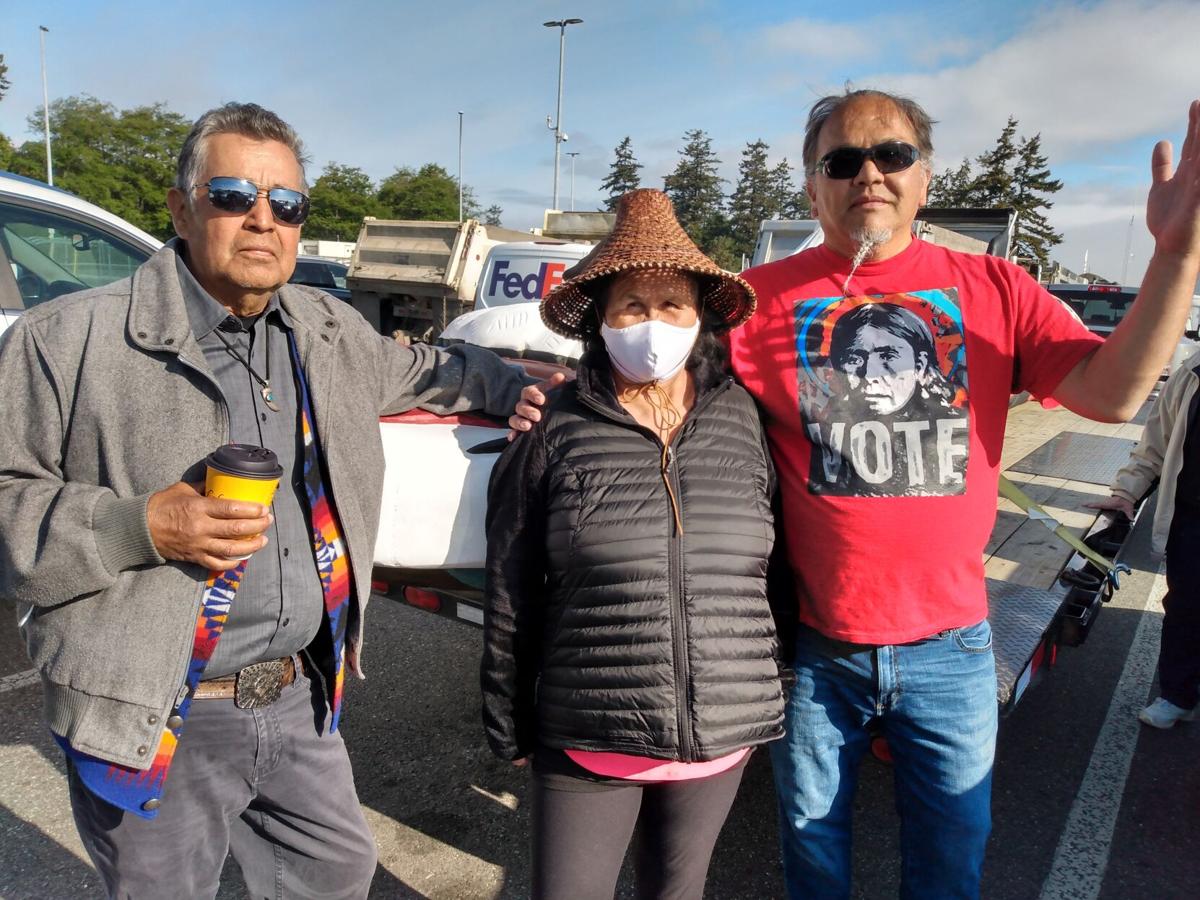 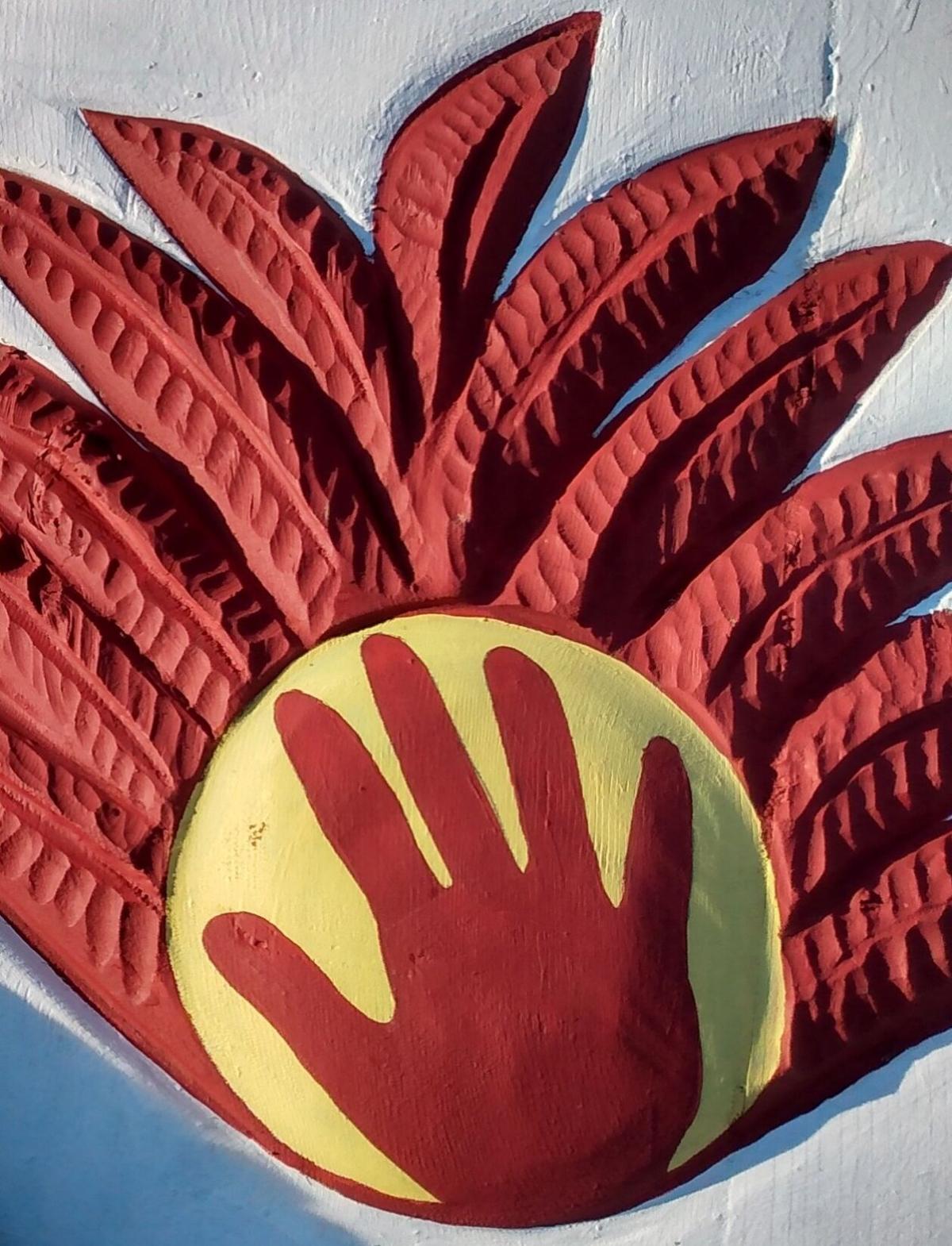 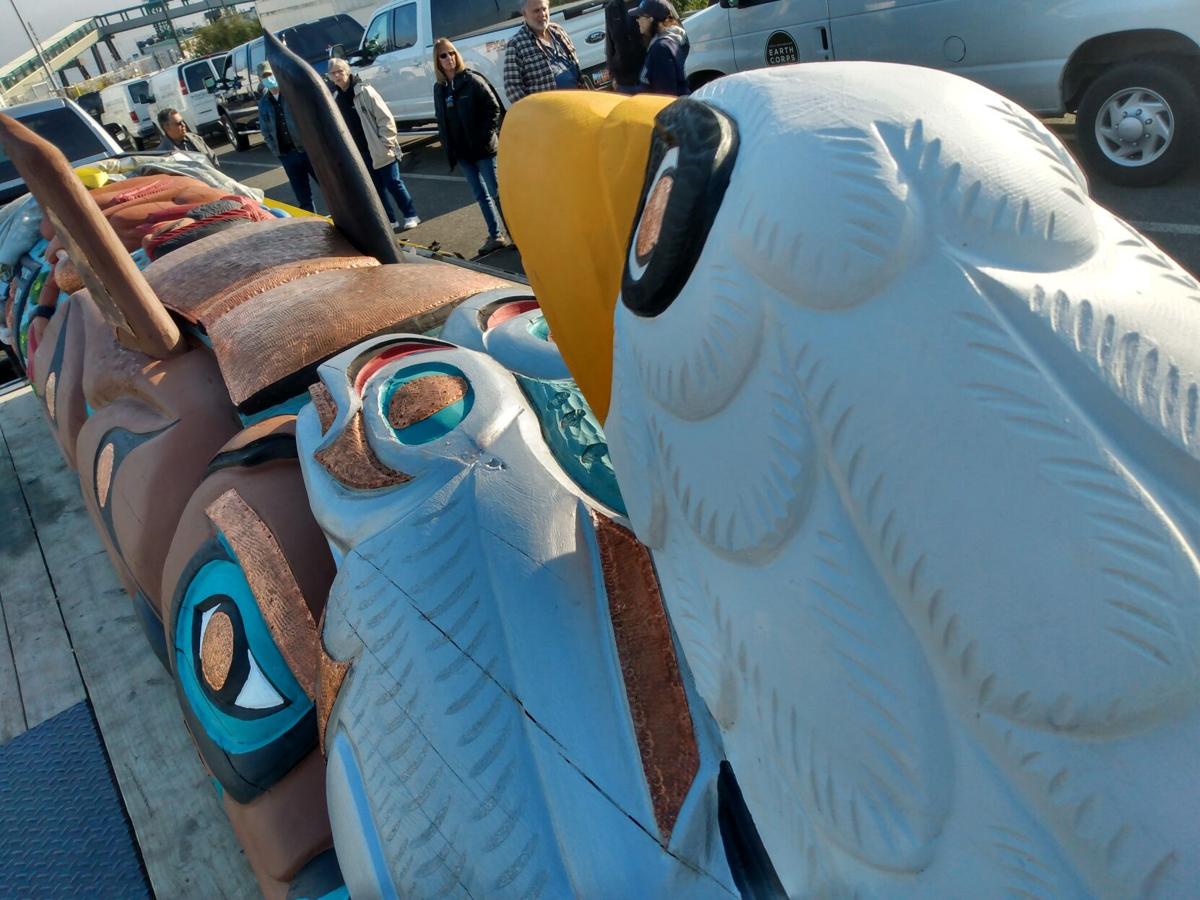 Buy Now
Detail from a 25-foot Healing Pole that was taken Monday to San Juan Island as part of a nationwide journey that will end in Washington, D.C. (Richard Walker / Anacortes  American)

A nearly 25-foot totem pole that is being taken across the United States as a call for the protection of sacred places stopped Monday at the Anacortes ferry landing while en route to San Juan Island as part of its nationwide journey.

The pole was carved by Lummi Nation master carver Jewell James and the House of Tears Carvers. It is carved from a 400-year-old western red cedar, measures 24 feet, 8 inches long, is 3 feet wide, and weighs 4,900 pounds.

After stops at environmental battlegrounds throughout the U.S. — among them Bears Ears, Utah; Grand Canyon, Arizona; and Standing Rock, North Dakota — the totem pole is scheduled to arrive in Washington, D.C. on July 28. According to Doug James of the House of Tears Carvers, the pole will be presented to President Biden and displayed at the Smithsonian Museum of the American Indian.

At stops along the way, Native American and non-Indigenous people will be able to offer prayers, to touch the pole, to drum and sing.

At the Anacortes ferry landing, Rosie Cayou, a Samish tribal member who lives on Guemes Island, joined others in offering a blessing song. Her husband, Bill Tsulton Bailey, an Upper Skagit carver, offered a blessing to give James and his entourage strength for the journey ahead. Then, an eagle flew overhead and Kayden Nogueira, 4, stepped forward with his drum and sang an orca whale song.

The pole was taken Monday to English Camp, which until 1859 was a Lummi village site. There, it was welcomed by Lisa Nash Lawrence, a Mitchell Bay Band descendant and member of the Swinomish tribe. In the ensuing couple of days, the pole was to visit Lummi village sites on Orcas and Lopez islands.

As the group accompanying the pole waited Monday for the 9:05 a.m. ferry to Friday Harbor, people gathered and took photographs and talked with James.

The pole also calls attention to the sacredness of human life. The pole features red hands, a symbol for murdered and missing Indigenous women and girls. Another part of the pole features a carving of a little boy in a cage, representing the children held by the U.S. near the Mexico border. Most Mexican people are Indigenous too, James pointed out, and their ancestors had trade and family connections that extended north to Colorado.

Near the depiction of the little boy, a grandmother with a rattle sings a prayer song.

Doug James, Jewell James’ brother and a member of House of Tears Carvers, said the pole intends to remind observers of their responsibility to the earth and those we share it with — and to spur them to action.

“We’re using this pole to bring the awareness more than ever to the plight of the Earth, our mother,” he said. “We’re saying, ‘What are you going to do when we’re long gone, when we’re dust? What’s going to be left behind for these little ones here if you don’t stand up and have your voice heard now? How long are you going to wait? Time’s running out and the clock is ticking. We’re asking you to stand up and speak out.’”

The pole will be a lasting reminder of that responsibility, he said. “This pole is from a log from a 400-year-old cedar tree. It will be standing long after we’re gone.”

“The salmon is the very essence of who we are and where we come from as Native American people,” she said May 11 on Orcas Island. “Who we are and what we look like and where our cultures come from — our bloodlines, our Tlingit names, our Coast Salish names — are all intertied into telling our stories.

“We’re using this pole to bring the awareness more than ever to the plight of the earth, our mother. We’re saying, ‘What are you going to do when we’re long gone, when we’re dust? What’s going to be left behind for these little ones here if you don’t stand up and have your voice heard now?”