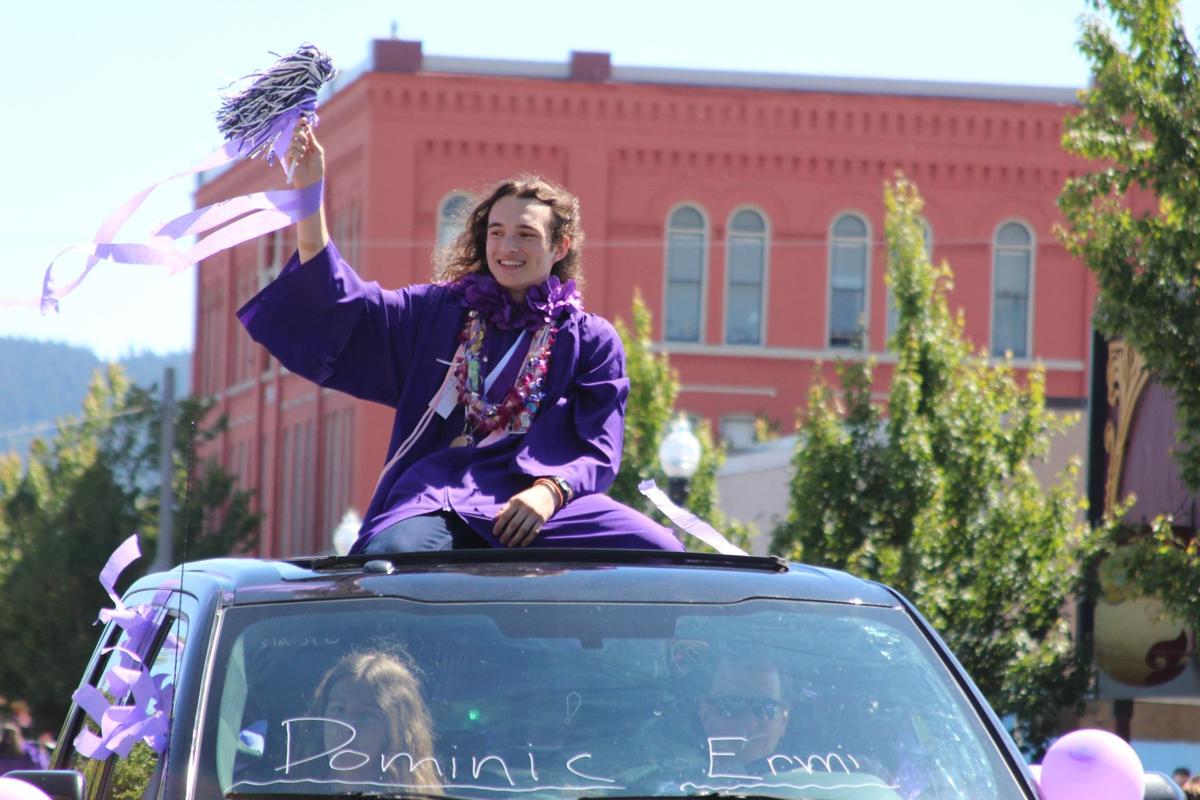 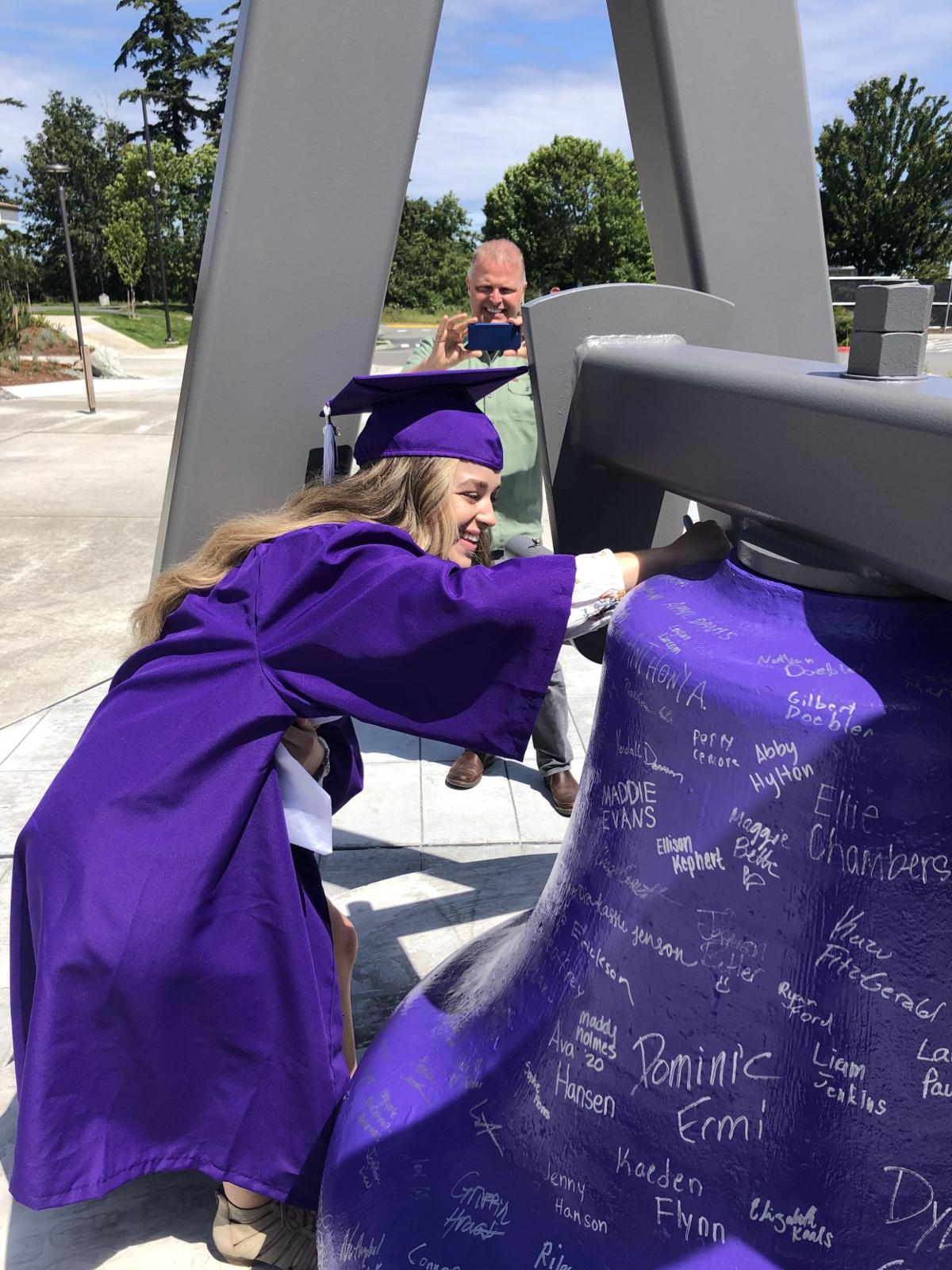 Seniors had the chance to sign the purple bell, an AHS tradition, with family on graduation day.

Seniors had the chance to sign the purple bell, an AHS tradition, with family on graduation day.

Rows and rows of students, all decked out in purple gowns. Seats filled with teachers and administrators. Bleachers bustling with the cheers of supporters.

The 169 graduating seniors at Anacortes High School didn’t have any of the normal elements of their graduation ceremony, but they still found a way to celebrate.

In a pre-recorded graduation video that aired Wednesday, July 17, the seniors had the chance to make speeches, see their principal and collect their diplomas.

The airing of the graduation ceremony followed photo opportunities around campus in the morning (with senior traditions like signing the big purple bell) and a celebratory parade through town for both AHS and Cap Sante High School.

More than 400 people tuned in on YouTube to watch the graduation ceremony as the district honored the seniors moving on to the next stage of their lives.

Each of the six AHS valedictorians took on a theme about certain senses in their speeches, but not senses like touch and smell.

Anna Prewitt talked about the sense of place. Everyone graduating spent at least part of their

schooling in Anacortes, and it made a mark on them no matter if they want to stay forever or can’t wait to leave, she said.

“This place will miss you,” she said. “You’ve been a part of it, and it has become a part of you.”

Driving through town, each person will see different landmarks in their own ways, especially at the schools, Prewitt said.

“Our memories color these places that we’ve loved and hopefully learned,” she said.

Kassandra Jenson talked about a sense of self. Students are peppered constantly with questions about what’s next for them, where they are going and how they will get there, but a sense of self starts even earlier, Jenson said.

In kindergarten, teachers ask students what they want to be when they grow up.

It’s important to think about those things, but students are much bigger than a piece of paper with their name on it and a box checked off on life’s to-do list, Jenson said.

She posed a question that she said could be more relevant.

“Are you utilizing prior and future experiences to become the best version of yourself in the present?” she said.

Maxwell Hanesworth talked about the importance of a sense of humor. A laugh to help pain starts at a young age and continues with a person, he said. The ability to laugh when facing difficult things is important in life and more so as people get older, he said.

Science has proved that laughing and smiling can make someone happier and it can help with medical issues, he said.

That’s not to say that laughter is the only emotion worth expressing, but he urged people not to wallow in only negative emotions. That leads to getting stuck, he said.

Ava Hawkins took on senselessness in her speech. Sometimes things come out of nowhere that don’t make sense and can be painful and scary, Hawkins said. It’s what people do in the face of that senselessness that helps define them.

“Senseless acts force us to face things that are broken,” she said. “Our class has been dealt a difficult hand, but that is no reason to lose heart.”

The year 2020 was supposed to be full of joy, but now seniors are making their transition during a pandemic and in a time of economic and social uncertainty.

“We could have had a smoother passage,” Hawkins said.

April Davis focused on the sense of responsibility that seniors have increasingly felt since walking into high school. It’s become more and more evident as things in the world have gotten harder, especially in the last few months, Davis said.

With conflict and tension on the rise in America, seniors have a sense of responsibility to do what they think is right and fight for what they believe in, she said.

For Grace Hill, there is a finding balance in a growing sense of urgency.

That urgency makes things happen, but can also be distracting, she said. Often, people think things are more urgent than they are and don’t take the time to enjoy what they are doing.

“In the years to come, I urge you to indulge in the journey instead of rushing straight to the destination,” she said. “Get off the trail and get lost.”

Sometimes, when someone is wandering, that’s when they find themselves, she said.

“Things can change faster than you can say COVID-19,” Hill said.

Rowell talked about memories that the senior class shared and the ones they missed out on.

“I can’t wait to see where our lives take us because our future is nothing but bright,” she said. “Right now, the world is in the palm of our hands, and it is up to us to decide how we will change it.”

Murphy said people need to stand up for what’s right and to be kind.

AHS Principal Jon Ronngren and Superintendent Mark Wenzel shared thoughts about how strange it is to be speaking to a camera and an empty auditorium instead of rows of smiling faces.

“Savor this unusual but still meaningful graduation ceremony,” Wenzel said. “Take what you’ve learned in Anacortes and seize the day.”

Ronngren said he wanted the students to remember hope, because it is something that will keep people going even in the darkest times.