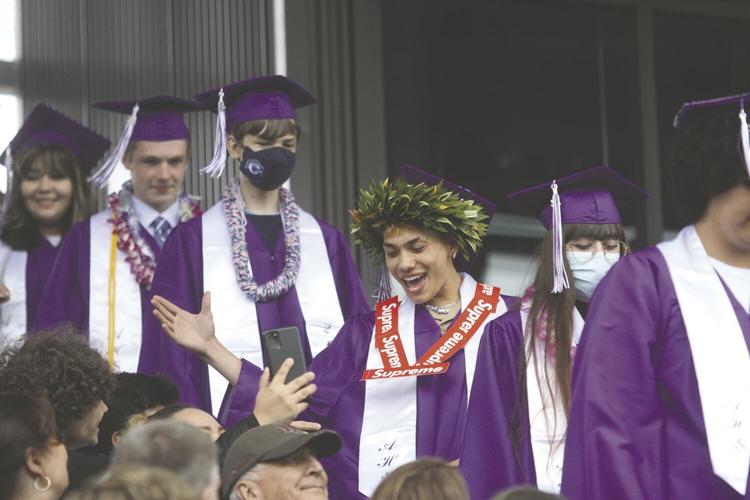 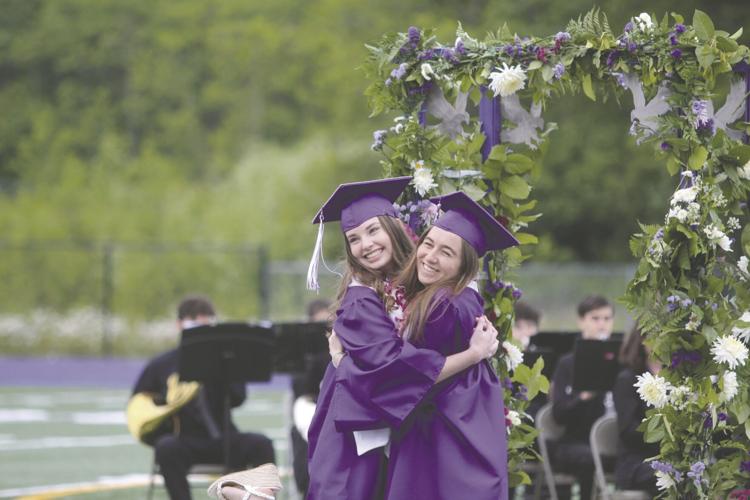 The lessons from the “My Little Pony” show aren’t just for the young. They can be carried into adulthood and beyond, at least according to the seniors at Anacortes High School.

Class of 2022 president Maya Marshall said she remembers wearing a new “My Little Pony” shirt in elementary school and said the pony friends she recalls from that show are still teaching her today.

The ponies represent the element of harmony, and each one is important to being the best student, friend and person each graduate can be, Marshall said.

“Take these attributes with you as you take your last step off the Anacortes High School campus today, our home away from home,” Marshall said. “Bring them along as you enter your future and continue reminding yourself of these elements as now, for the first time, we spend our years apart.”

Along with those elements, each graduate is taking with them memories of a shared childhood, as well as influence and learning from the teachers.

Just like Pinkie Pie, the Class of 2022 is special because of its ability to find laughter in every situation, Marshall said.

Each of the class valedictorians took a different pony to talk about during their respective speeches, which corresponded to the ponies painted on the top of their graduation caps.

Ryan Horr talked about Rarity, who always seeks to help others and keep friends out of trouble. He talked about the friendships he created and lessons he learned while running track. He talked about a teacher giving him a piece of equipment and how it showed him that it’s important to look out for others.

The graduates won’t be remembered by what they did for themselves, but how they helped others, he said.

The last week of school comes with it a lot of reflection, said Tuscan Harper. As he looked back at his classmates, he kept thinking about how kind they were, much like his pony, Fluttershy. He was going to advise everyone to remember to be kind, but this class already has that down, he said.

Isabel Shainin talked about Rainbow Dash, who some think should be switched with Applejack. Isabel Shainin joked that it was fitting since her twin sister, Lucy, would be talking about Applejack moments later.

Rainbow Dash always sticks by her friends and works to keep them all together, Isabel Shainin said. It’s important to be loyal to relationships and causes, but it’s also equally as important for each person to be loyal to themselves and to not compromise their values.

It means building trust through deeds, not just words, she said. Friendship means trusting the other person to accept mistakes but also forgiving the person for their mistakes. There is no obligation to be loyal if the relationship is not serving you, she said.

Letting go of unhealthy relationships is part of being loyal to yourself, she said. Setting and respecting boundaries is part of that.

Lucy Shainin talked about Applejack, who represents honesty, “the pony that everybody wants to be when they grow up.”

For her speech, Lucy Shainin created a step-by-step guide to being “as cool as Applejack.” They are being honest to yourself, being honest with others and acquiring a “truly enormous cowboy hat” and committing to wearing it every day.

While not everyone will stick to step three, steps one and two are already in practice, she said.

“Our class has learned the hard way the importance of honesty, with over half of our time in high school being impacted by a worldwide pandemic,” she said. “It’s easy to try to downplay the impact the pandemic played, but the class is still being honest about how it has been affected socially, mentally and academically.

“In being honest about that impact, we show each other that the pain this pandemic has caused is not imagined,” Lucy Shainin said. “Despite this, our class has persevered.”

Connor Barton talked about Twilight Sparkle and the value of friendship.

“We are shaped by our friends in ways we can’t even see and, in many cases, they make us who we are,” Barton said.

A lot of people will go their separate ways next year and lose touch, but they have been together almost every day for the past 18 years.

“We don’t know what the future has in store for our friendships and our family here, but who cares,” he said. “We’ve all been an integral part in each other’s lives, and that is something that can’t drift away. That is where the magic is found.”

Class-chosen speaker Michael Hanrahan talked about being a kid on the verge of turning into an adult.

He offered some thoughts to the graduates on what steps may lead to wisdom.

The first is to slow down.

“It feels like I fell asleep last night after the first day of kindergarten and woke up on the last day of high school,” he said. “You might say time flies, but I disagree. If time really flew, we’d have a beautiful and carefree look at our lives. I think it’s more accurate to say time runs. It sprints.”

The next step is to listen.

“Your voice is what makes you you, but it shouldn’t be the only one you hear,” he said.

The third step is to let go and recognize that mistakes are all around.

“We are not perfect, but that’s not the point,” Hanrahan said. “We are capable of so much. To feel the joy of success, you must also feel the sting of failure along with it.”

He challenged the graduates to come to terms with every decision they have made to this point, whether with pride or regret.

“To accept your choices is to accept who you are,” he said.

As for a fourth step to wisdom, Hanrahan said no one knows what that is.

“Don’t think for a second you have all the answers,” he said. “We have so much ahead of us and all that’s to be gained, it’s impossible to imagine. … The wisdom worth seeking in this life won’t be found in a day, a month or a year. There’s a whole world out there; it takes time to befriend it.”