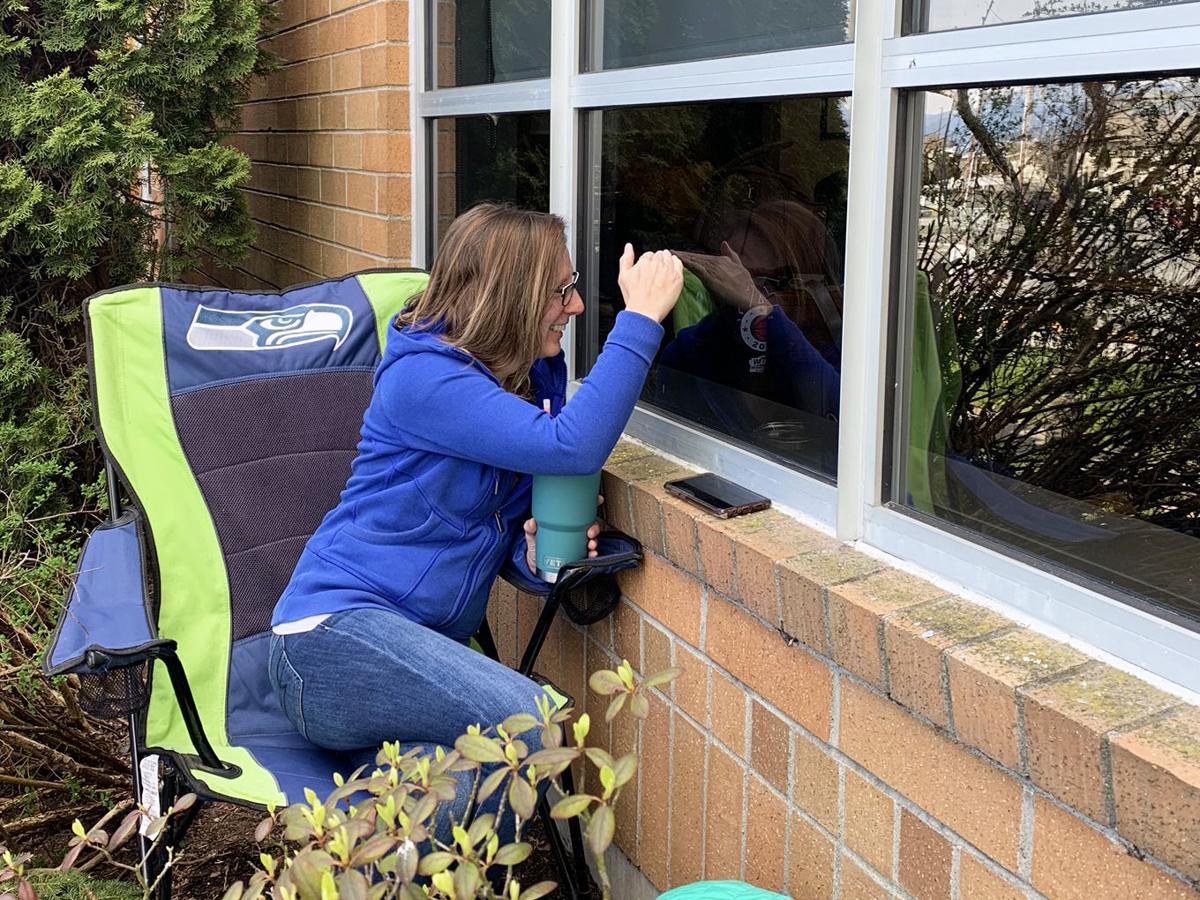 Waiting with anticipation for the arrival of her granddaughter, Sophia, is Jennifer Leahy. Although not able to physically be in the room, Jennifer is able to speak with her daughter, Darian Sanchez, over cell phone as Darian moves through her labor. 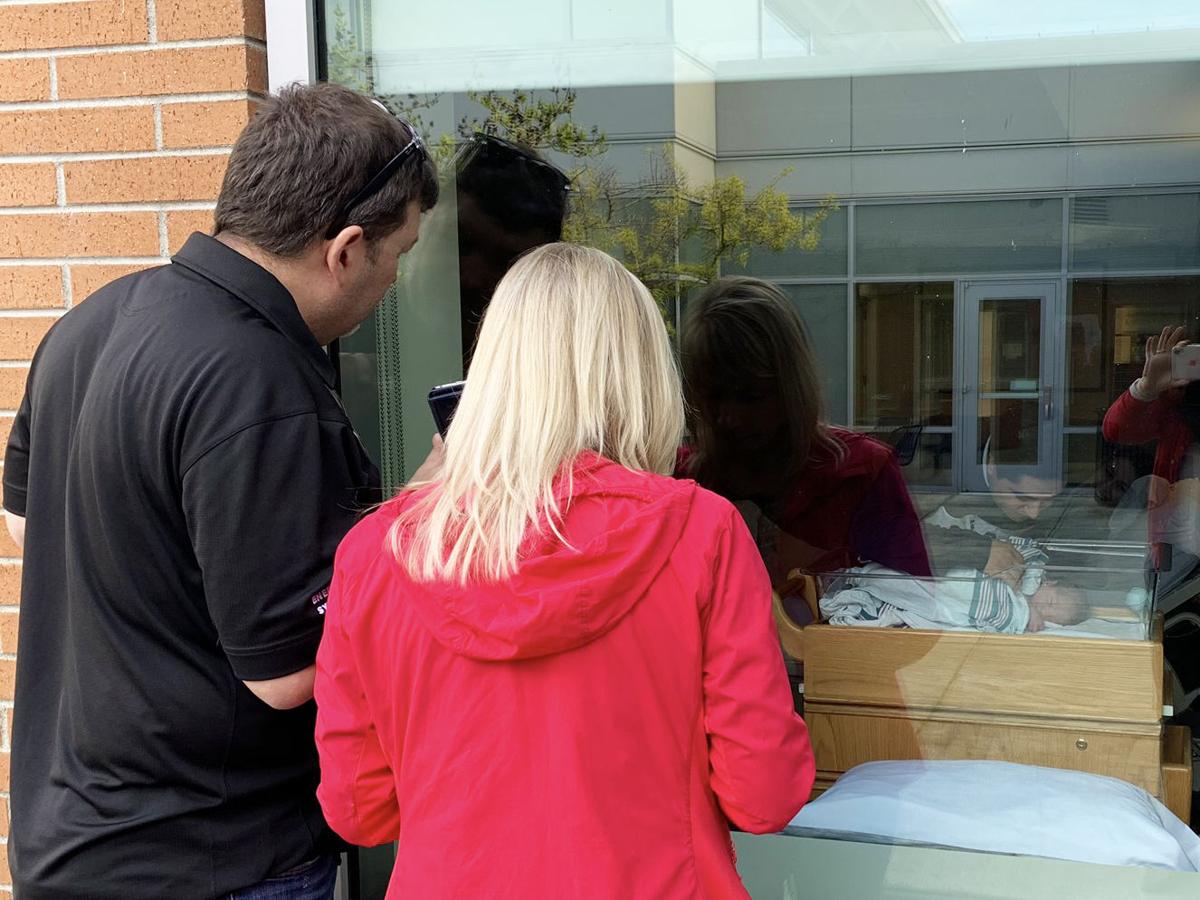 Proud first-time grandparents, Andrew and Sally Azure, joyfully welcome the newest member of their family, Kion, as they peer through the window and speak through their cell phones to parents, Haley Azure and Jose Zaval.

Waiting with anticipation for the arrival of her granddaughter, Sophia, is Jennifer Leahy. Although not able to physically be in the room, Jennifer is able to speak with her daughter, Darian Sanchez, over cell phone as Darian moves through her labor.

Proud first-time grandparents, Andrew and Sally Azure, joyfully welcome the newest member of their family, Kion, as they peer through the window and speak through their cell phones to parents, Haley Azure and Jose Zaval.

Outside the windows of the Birth Center at Island Hospital, expectant and brand-new mothers and fathers can normally see some bushes and flowers, a bit of sky and maybe a bird or two.

These days, there’s another view – faces peering back at them through the glass, some camped out with folding chairs and snacks.

Family members are finding new ways to connect with those inside giving birth as the hospital limits visitors inside the center during the COVID-19 pandemic.

Jennifer Leahy brought a chair and snacks with her on April 14 as her daughter labored inside the hospital. She spent most of the day outside the hospital, her phone on speaker phone and answering questions from her daughter and offering support. She went home and slept for a few hours before coming back the next day.

“It wasn’t how I imagined it would be,” she said of the birth of her first grandchild. But she still felt like she got to be a part in the birth and was able to stay connected to new parents Darian and Andrew the entire time.

She was able to keep

offering advice to her daughter until baby Sophia was born April 15.

“I can’t imagine missing it completely, that would be devastating,” Leahy said. “But she’s here and she’s healthy, and I’m beyond happy to be a grandma.”

Center Director Tonja Dunton said it has some different policies and a new entrance, but for the most part things are “business as usual.”

“Babies are always going to come, through any type of disaster,” she said.

Expectant mothers may have one helper come into the hospital through a designated entrance, Dunton said.

Everyone entering the birth center is screened for possible COVID-19 symptoms.

If a patient did test positive for the virus, she would be placed in a special room with reverse airflow to keep everyone safe, Dunton said.

Births have definitely been a little different with just one support person per woman in labor. With patient permission, though, family members are finding creative ways to take part.

“We are lucky to be on the ground floor,” Dunton said with a laugh.

One of the duos who came by to meet their new grandchild were Sally and Andrew Azure of La Conner.

Their daughter Hailey Azure lives in Anacortes and was at home for most of her labor, but her parents arrived at the hospital just after she gave birth on April 14.

“He’s perfect, and they are both healthy,” Sally said.

She said the staff at Island Hospital raised the curtains for her, and her daughter’s boyfriend wheeled baby Kion over to the window so they could see him.

Dunton said in an email that the Birth Center nurses have taken on more responsibility during the pandemic.

“They’re coming in beyond scheduled hours, even when called in at night, and following every safety precaution to the letter as they face the same family challenges as the rest of the community,” Dunton said.