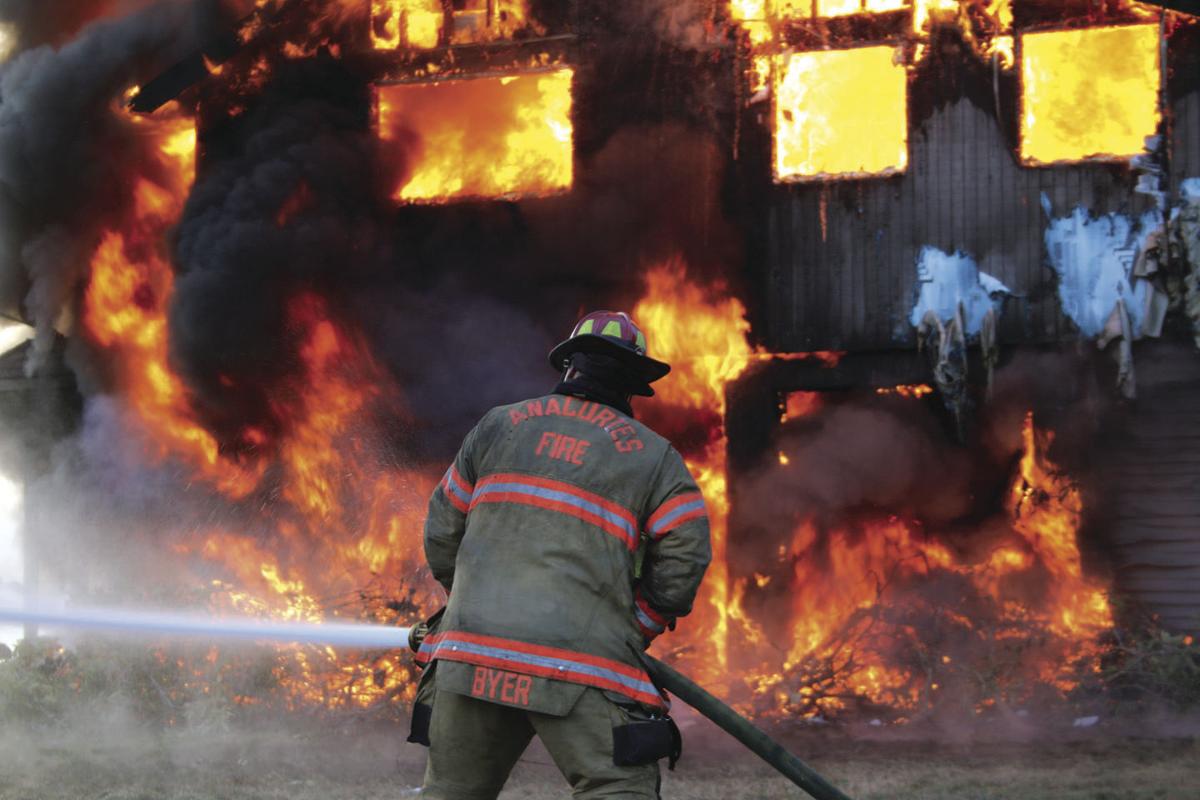 Anacortes Fire Lt. Chris Byer sprays water to keep a training fire at bay Saturday near Anacortes Airport. Firefighters trained in a house donated by the Port of Anacortes for the purpose, and then allowed the house and two outbuildings to burn to the ground. (Richard Walker / Anacortes American) 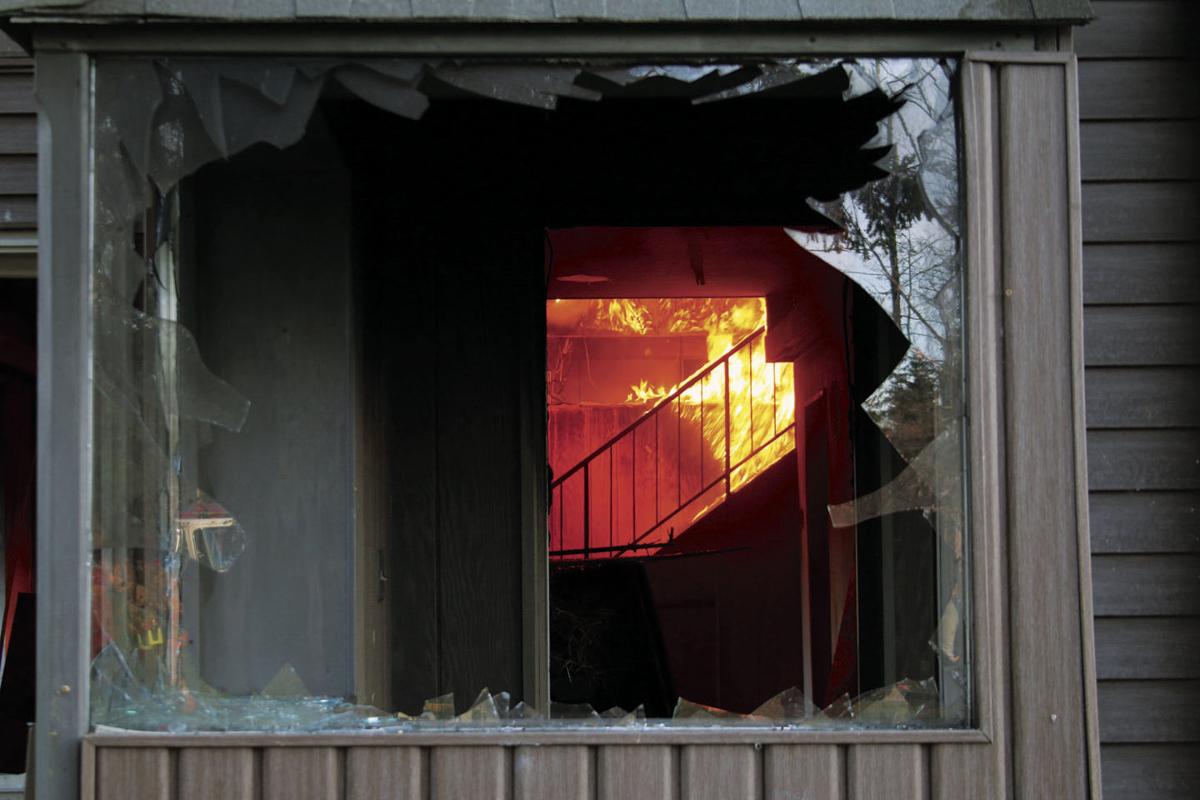 Fire travels from the second floor to the first floor of the former Rockwell house on Airport Road during a firefighting exercise. (Richard Walker / Anacortes American) 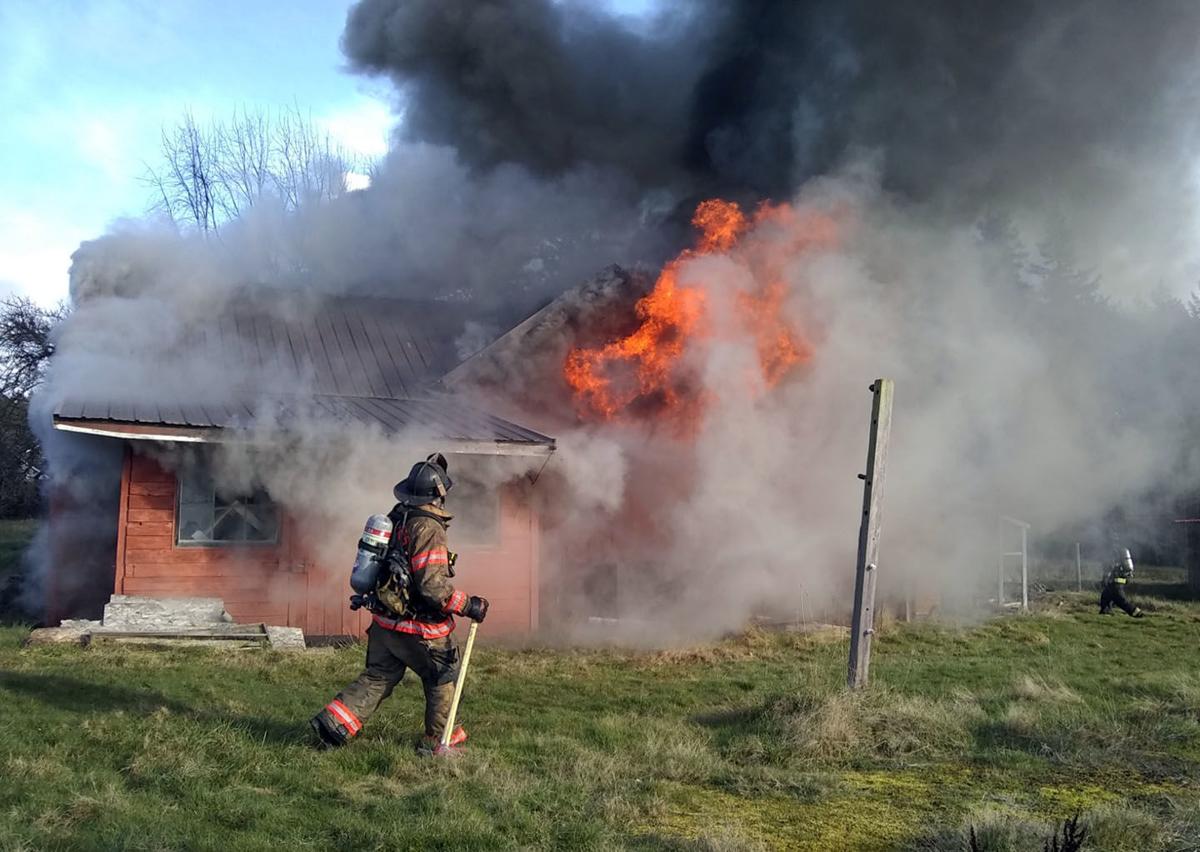 Flames and smoke pour out of the barn loft on the former Rockwell property during a fire training exercise Saturday. (Richard Walker / Anacortes American)

The adjective most used by onlookers to describe the live-fire training exercise Saturday near Anacortes Airport was “cool,” as in “This is cool.”

But the event — the temperature from it, anyway — was anything but cool.

As flames roared and smoke billowed out of the barn loft, Anacortes Deputy Fire Chief Jack Kennedy estimated the temperature inside was 2,500 to 3,000 degrees — hot enough to melt aluminum, brass, bronze and steel. He said a structure fire doubles in size every 30-40 seconds, and it didn’t take long for the former farmhouse and outbuildings at 4015 Airport Road to be reduced to nothing but ash and memories.

A crowd of onlookers watched as local firefighters and training officers from Seattle Fire Department burned down the house, barn and a solarium on property owned by the Port of Anacortes.

Such training is rare. This was the first such training fire, in which a house is donated for fire training purposes, since 2011, Fire Chief Dave Oliveri said.

“I can’t put a price tag on what this means to us. I’ve had some of my 20-plus firefighters tell me this is the best training they’ve had in their entire career,” he said as firefighters fought smaller training fires inside the house before getting the structure ready to burn to the ground.

“We can get a little fire going in them, but nothing else about that is the same as a residential or business structure,” he said of Saturday’s exercise. “By doing something like this in a house, it’s a controlled environment, but it’s a real environment, with real rooms, hallways, doorways, stairwells. … It shows us what a building, what a house will do when it’s on fire.”

There was benefit to the port, as well, in having the property cleared for later possible light manufacturing use. The port bought the 7.78 acres in March 2019 from the family of the late Bill and Betty Rockwell for about $1.5 million. There are no immediate plans to develop the property, which was purchased because of its proximity to the airport and its zoning designation.

After training, firefighters strategically placed pallets and hay bales inside the buildings to make sure each burned entirely so no unstable structure was left behind. Each building would burn from the top down.

The barn was the first to burn, then the solarium, then the house.

Greg Marsh watched the fire with his girlfriend, Carolyn Vander Vegt. As flames consumed the upper floor of the house, Marsh said, “It’s awesome to watch. How often do you get to see a live fire? It’s real life.”

Vander Vegt was more melancholy. She kept horses there for 30 years and lived on the property for 15. After Bill Rockwell died, she lived there in a park model trailer and helped Betty Rockwell care for the property.

“This all used to be (open) acreage,” Vander Vegt said of the area. “This is the last of the rural fields, the last rural land here.”

Later, the crowd watched as fire consumed the upper floor of the old Rockwell house, then the stairway as it descended downstairs to the first floor. The house was soon fully engulfed.

Spectator event though it was, Oliveri said he hoped onlookers would come away more aware of the importance of fire safety.

“I hope they realize how scary, how dangerous, how hot it is and how easy it is to get burned,” he said, noting that residents can call the Anacortes Fire Department for a free fire-safety home inspection.

The live-fire training made an impression on Gavin Byer, 10, who offered these safety tips:

“Be careful around it. Don’t play with fire. And if there’s a fire, stay away from it.”

Onlookers watched as local firefighters and training officers from Seattle Fire Department burned down the house, barn and a solarium on prope…