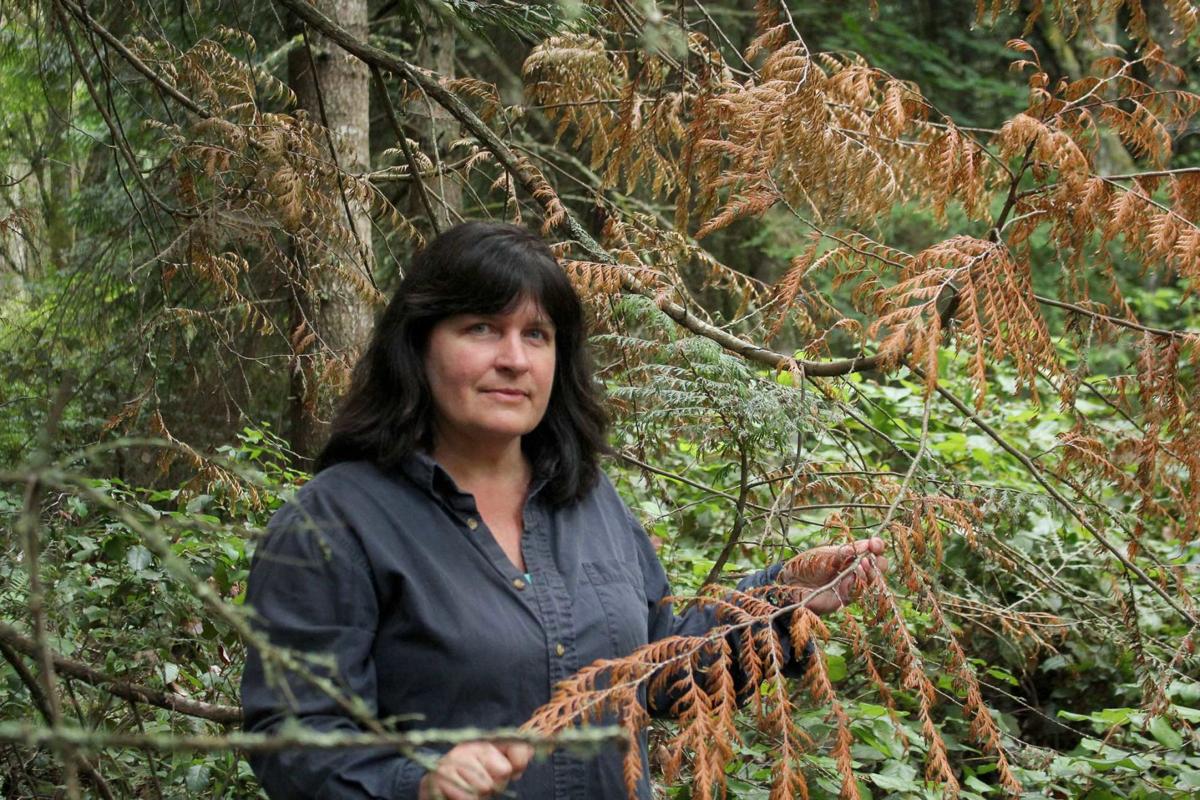 Denise Crowe, education and outreach director of Friends of the Forest, holds up a dead cedar branch Aug. 2 near Little Cranberry Lake. Crowe, along with forest health managers in Western Washington, have observed an increase in dead trees they attribute to hotter, drier summers in the Pacific Northwest. 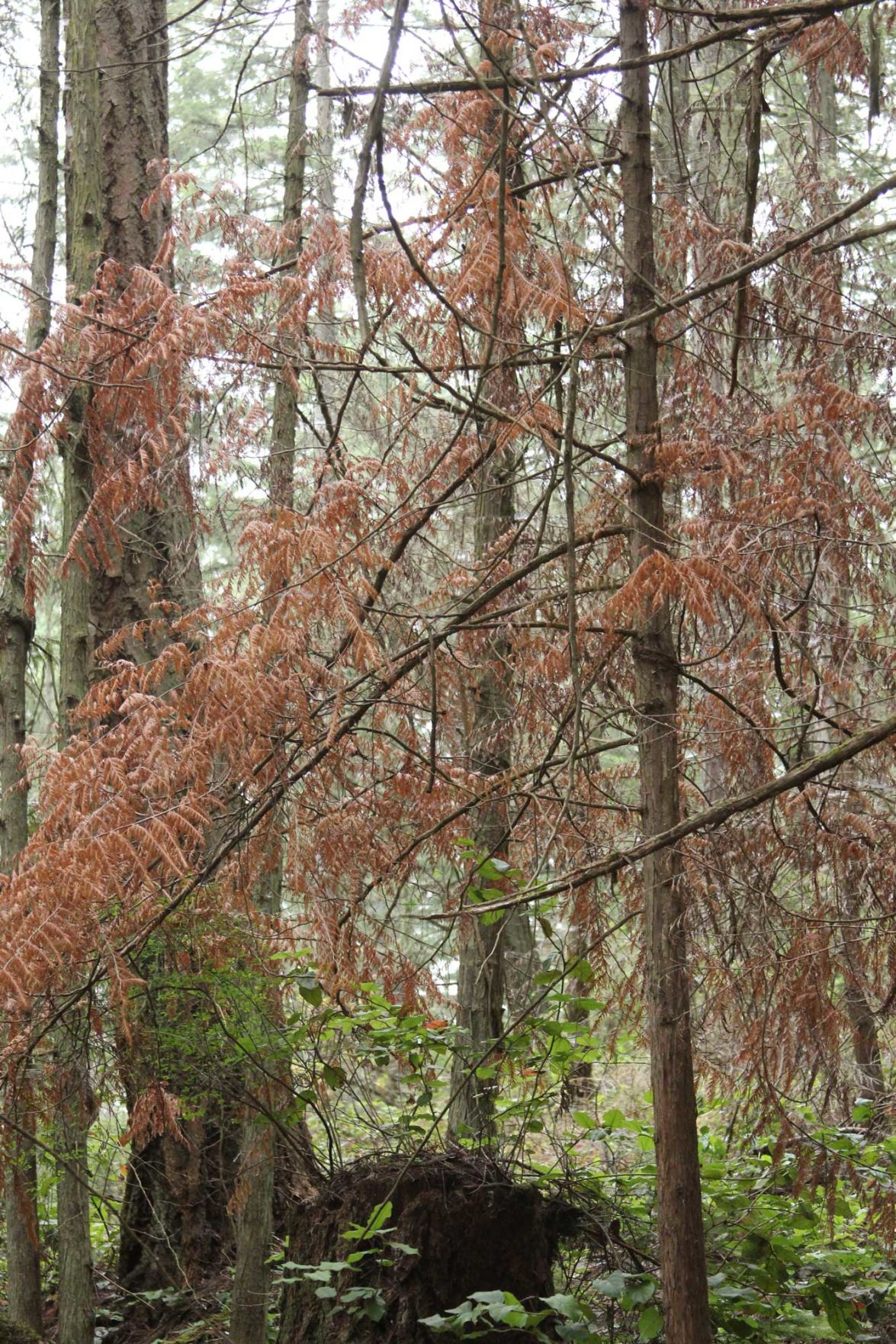 Denise Crowe, education and outreach director of Friends of the Forest, holds up a dead cedar branch Aug. 2 near Little Cranberry Lake. Crowe, along with forest health managers in Western Washington, have observed an increase in dead trees they attribute to hotter, drier summers in the Pacific Northwest.

“It’s something people are noticing,” said Denise Crowe, on a recent walk in the Little Cranberry Lake area. Crowe is education and outreach director of Friends of the Forest, which focuses on preservation of the 2,800-acre forest lands owned by the City of Anacortes.

The increase in dead trees first came to her attention after several summers of drought.

Forest health managers in Western Washington are noticing, too.

Amy Ramsey, a forest pathologist with the state Department of Natural Resources, said she has received an uptick in calls this season from forest landowners about trees, particularly cedars and Western hemlock, suffering from drought.

“The trees that are dying are anything from seedlings to old trees,” she said. “Historically what happens with cedars is that the tops die back. But what we’re seeing now is a little bit different because entire trees are dying. We’ve seen it pretty widespread across Western Washington.”

Ramsey said the problem first came onto her radar in 2016 following the “really big drought” the previous summer.

In 2015, Washington state experienced moderate to extreme drought June through September, according to historical records from the U.S. Drought Monitor, a collaboration of U.S. Department of Agriculture, National Oceanic and Atmospheric Administration and the University of Nebraska. Abnormally dry conditions were recorded in 2016 and 2017.

2017 was the driest summer on record for rainfall in both the Puget Sound and San Juan Islands, according to weather data compiled in the Forest Health Highlights, an annual Natural Resources report.

It’s not a decrease in annual rainfall, but an increase in shorter, more intense periods of hot, dry weather that is to blame.

“It seems to be very seasonally based when they call,” she said. “We’re still trying to piece together what is going on. It is definitely a water-related issue.”

Anacortes resident Vince Streano, who measures rainfall for a community-based weather network, said that while the first part of the year was very wet, “from the middle of April until now, it’s been really, really dry.”

Some trees manage drought better than others. Cedars and hemlocks appear to be taking it the hardest, he said.

When soils are dry, more water evaporates out of a tree’s leaves than it can take up from the ground, Zobrist said. This can cause the tree’s plumbing system to fill with air bubbles, called an embolism, stopping water movement upward. The branches above die.

Evergreens have some defenses against typical dry Pacific Northwest summers, he said. One is the ability to close up their stomata, the tiny pores on needles and leaves, to prevent water from evaporating out. But this also starves them from the sunlight they need to photosynthesize.

“What’s not normal is to go for many weeks without precipitation, or for many days that are 90 degrees,” Zobrist said. “These are not the normal level of heat and drought that our trees are adapted to.”

Dry weather and heat can also make some trees more vulnerable to disease and pests, he said.

This summer, more bark beetles have attacked drought-stressed Douglas Firs in parts of Washington, breeding in dead or downed branches, according to DNR news release.

Much of the forest lands is second-growth forest, meaning it was logged for timber or destroyed by fire in the past. Since then, it has regrown and has some characteristics of an old-growth forest like species diversity, trees of all life stages, and a lot of cedars — a shade-loving tree that will only appear after Douglas Firs have reached maturity.

In the forest lands, Crowe said medium-sized cedars ranging from 10 to 50 feet appear to be dying the most. In some areas, an individual tree has died, and in a few spots, entire stands of cedars have been wiped out.

If the pattern of droughts continues, she wonders how that will affect forest composition and biodiversity. “To what degree can plants and animals adapt?” she said.

“I’m not really sure we have a good understanding of impacts at this point,” said Ramsey, the Natural Resources tree health specialist. “These things are happening a lot faster than we expected in response to changing climate and decreasing rainfall.”

Ramsey said she plans to create a map by the end of summer of trees in Western Washington affected by drought. Homeowners with information on dying trees can email amy.ramsey@dnr.wa.gov.

As far as fire danger resulting from dead trees, it depends on the number of dead trees in a given area and if they still have needles or leaves, Zobrist said.

Some dead trees are important to life in a forest.

“When it comes down to forest health, 40 percent of wildlife species need dead trees,” he said. “But it’s about balance. How much is too much?”

For landowners of woodland areas, Zobrist recommends creating a 100-foot buffer around their homes clear of dead trees and vegetation to prevent fires.

Fortunately, in the Pacific Northwest, there’s no massive die-off, Zobrist said, unlike in California where 129 million trees have died in 2010 due to drought, according to U.S. Forest Service.

“It’s really going to depend on, I think, the weather patterns that we get going forward,” he said. “My speculation is that we’re kind of going to see trees that are weeded out of soils that might not be ideal for them. These types of sites are going to shift to more drought-tolerant and wet-tolerant species.”

There is no magic “potion” like a pesticide to help mature conifers, he said. Long-term strategies to help trees include finding species that are right for a soil, understanding that more trees isn’t better, and realizing a dead tree isn’t inherently bad.

Dead trees can be cut down to 10 or 15 feet to reduce risk of toppling, while also providing habitat.

“(Dead trees) are a cause for concern, not a cause for panic,” he said. “We have to be more tolerant and change our expectations of how our forest and trees function.”