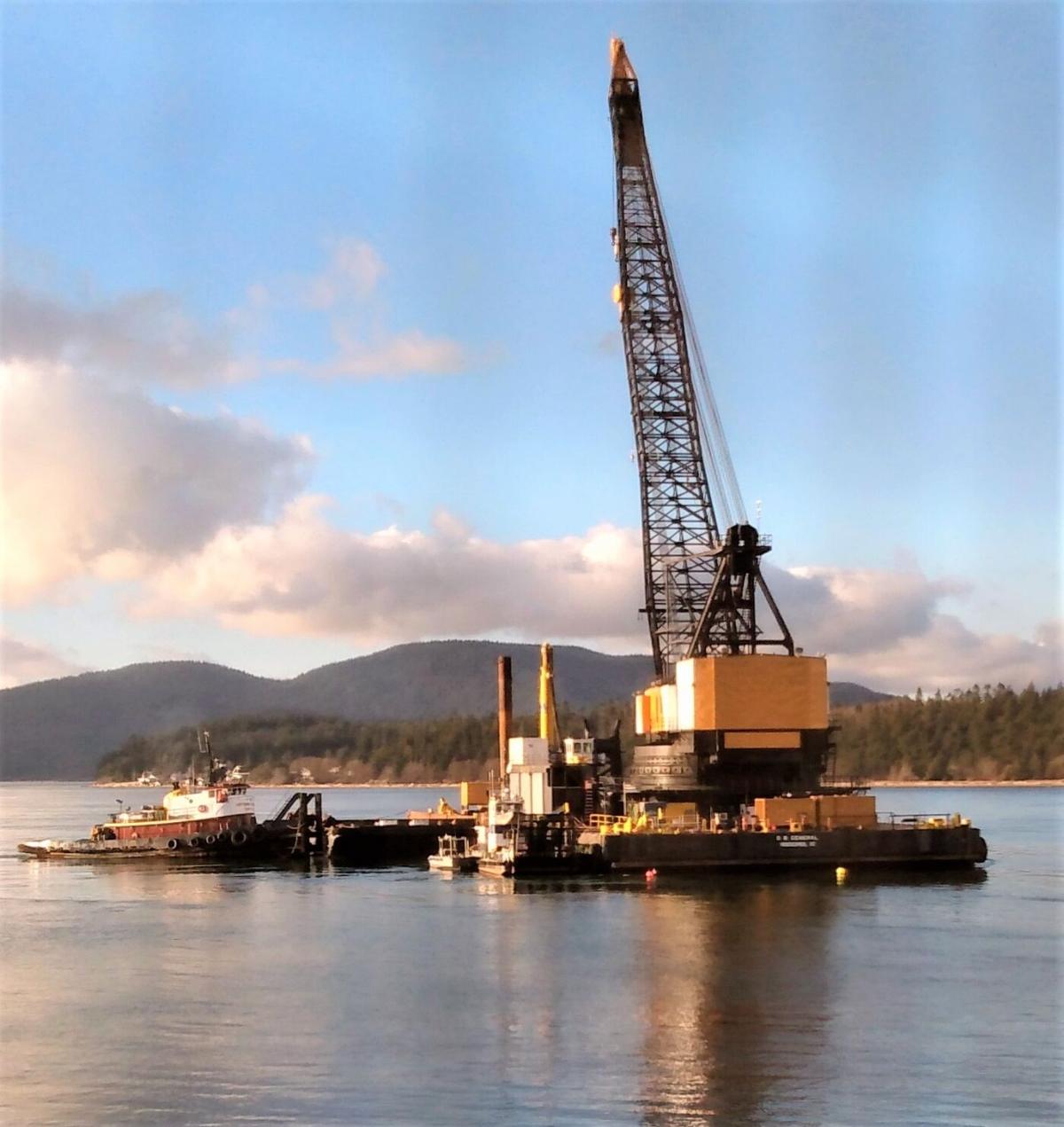 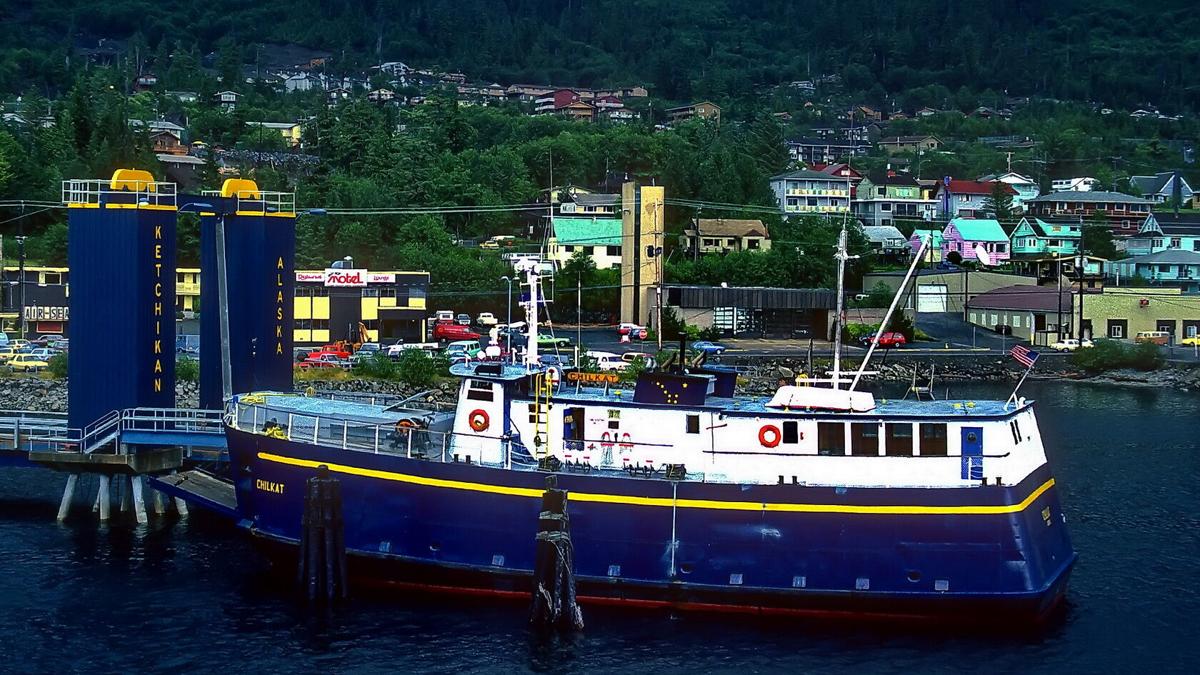 M/V Chilkat arrives in Ketchikan in 1985. The vessel, the first Alaska state ferry, was later converted to a scallop tender. It sank in Guemes Channel in the Jan. 12-13 windstorm. (Jim Thorne/Courtesy) 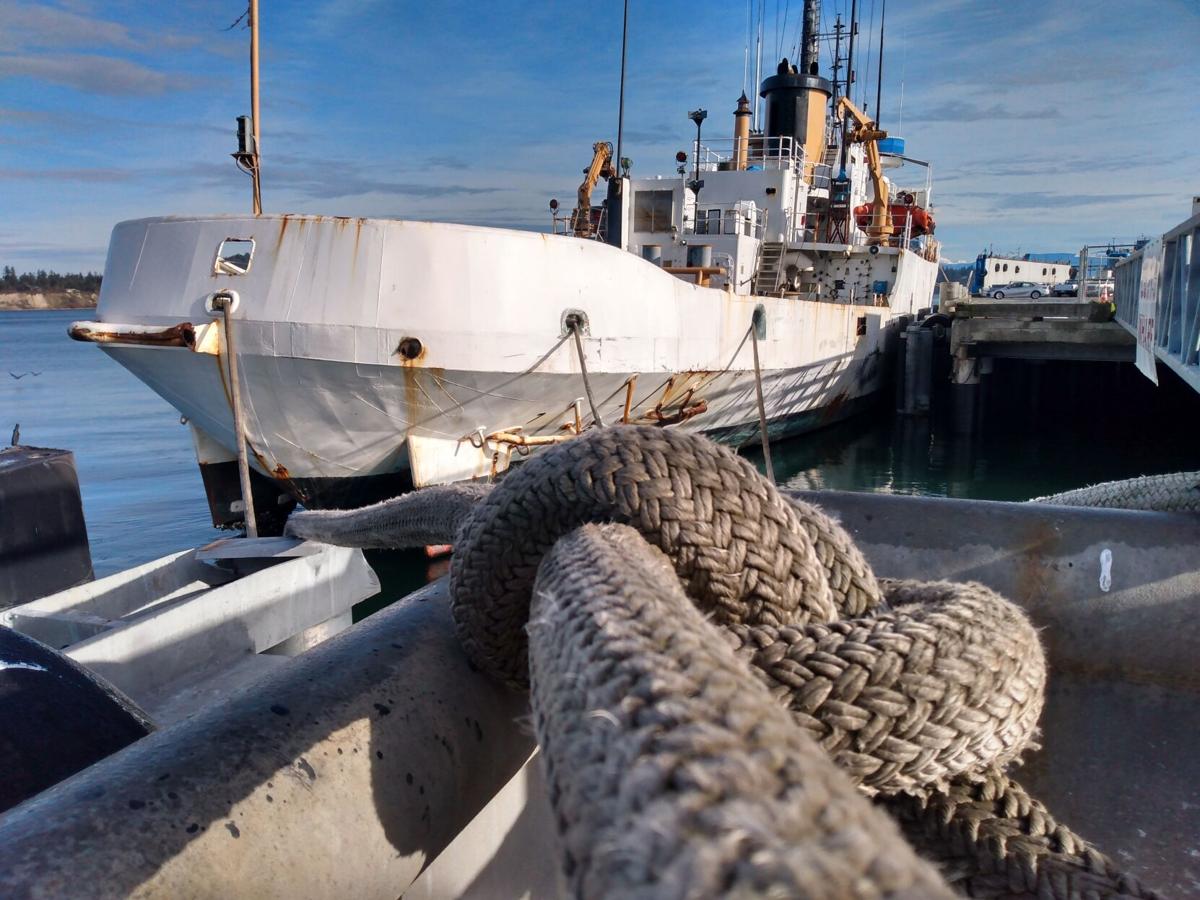 The former Acushnet is tied up at Curtis Wharf. (Richard Walker / Anacortes American)

The retired scallop processor resting on the seafloor west of the Guemes Island Ferry slip was once known as the Queen of Alaska’s state ferry fleet.

Meanwhile, a former Navy rescue-ship-turned-Coast Guard cutter tied up at the Port of Anacortes’ Curtis Wharf assisted ships damaged in battle in the Pacific during World War II and later, as a cutter, participated in what is considered one of the Coast Guard’s 10 most significant rescues.

Now, both distinguished vessels await uncertain futures. They broke free of their moorings at Lovric’s Sea-Craft in the Jan. 12-13 windstorm when a floating pier sank.

The ferry-turned-scallop boat, the M/V Chilkat, drifted into the Guemes Island Ferry dock during the storm. A witness video-recorded the 63-year-old vessel as it listed, took on water, capsized and drifted west of the dock before it came to rest on the seafloor. The ship’s pilothouse is visible at low tide. There has been no sign of pollution from the sunken vessel.

Global Diving & Salvage is contracted with the state Department of Natural Resources to recover the vessel. A 250-ton barge crane from Vancouver, B.C. arrived at the site Monday. Global salvage master Kristofer Lindberg said Tuesday that his crew was still rigging and expected to raise the vessel during slack current late Wednesday morning.

Florence Lovric, president of Lovric’s Sea-Craft, said Friday that Natural Resources was taking the lead in recovering the vessel and that it would not return to her boatyard.

The 73-year-old former cutter, the Acushnet, was secured by a tug and tied up at Curtis Wharf. The vessel is owned by Lovric’s, which was abandoned there by its previous owner, according to the boatyard’s project manager, Ed Ehler.

Lovric said a new owner was expected to take possession Monday. (The vessel was listed for sale on YachtWorld for $135,000.)

“This was an unfortunate incident,” Coast Guard Chief Petty Officer Kevin Ouyoumjian said in a report. “However, the immediate actions of the Lovric Sea-Craft marina prevented it from becoming a catastrophe. Also, the power of these winter storms should remind all mariners of the importance of securely mooring vessels at all docks and marinas.”

Lovric’s Sea-Craft reported on its Facebook page: “We are fortunate that nobody was hurt and that no pollution has occurred. We are working on raising the (scallop tender) and getting our facility back on track.”

John Lovric, general manager of Lovric’s Sea-Craft and son of the company’s president, said last week that divers were preparing the sunken dock so it could be raised and repaired.

Both vessels had distinguished histories.

The 99-foot M/V Chilkat was built in 1957 by the J.M. Martinac Shipbuilding Co. in Tacoma for about $300,000 and was the first ferry of the Alaska Marine Highway System, becoming the first state-owned ferry when Alaska became the 490th state in 1959, according to the Alaska Department of Transportation. It shuttled as many as 59 passengers and 15 vehicles daily between Skagway, Haines and Juneau; and later, between Ketchikan and Annette Island.

Alaska retired the Chilkat in 1988 and sold as surplus. By 2012, its owner was Pacific Scallops of Qualicum Beach, B.C. for use as a scallop tender. Florence Lovric couldn’t recall the vessel’s current owner.

The Acushnet was launched in 1943 as the USS Shackle, a rescue and salvage ship, according to the Naval History and Heritage Command. It assisted stricken vessels in the Pacific Theater, served as a support vessel during the invasion of Okinawa and conducted mine-sweeping operations in the South China Sea.

Shackle was transferred to the Coast Guard as a cutter in 1946, rechristened Acushnet, and conducted Northeast and international ice patrols. On Feb. 18, 1952, Acushnet rescued 18 crewmembers of the SS Fort Mercer, which had split in two in a collision during a fierce storm off Cape Cod. Acushnet later conducted search-and-rescue missions and humanitarian service in the Gulf of Mexico and Caribbean Sea, and participated in rescues, fisheries enforcement and drug interdictions on the West Coast.

Acushnet was decommissioned in 2011 and acquired by the nonprofit Ocean Guardian for use in environmental protection.

A subsequent owner, perhaps daunted by the expense of maintaining a 213-foot vessel, left it at Lovric’s and never returned, Ehler said.