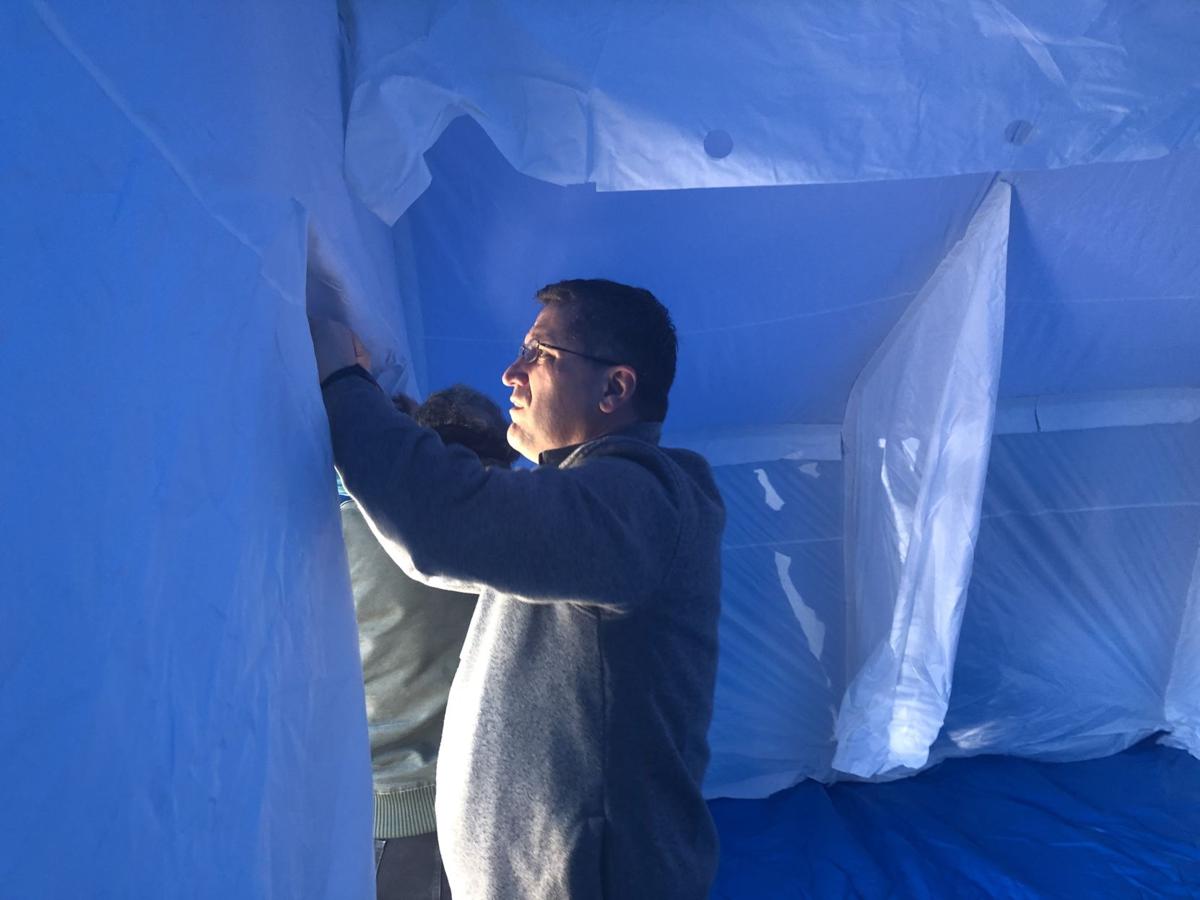 Island Hospital CEO Charles Hall helps set up an tent outside of the Emergency Department on Monday, March 9, in the event it is needed to triage patients who show symptoms of a possible novel coronavirus known as COVID-19. As of this date, no one in Skagit County has tested positive for the virus. 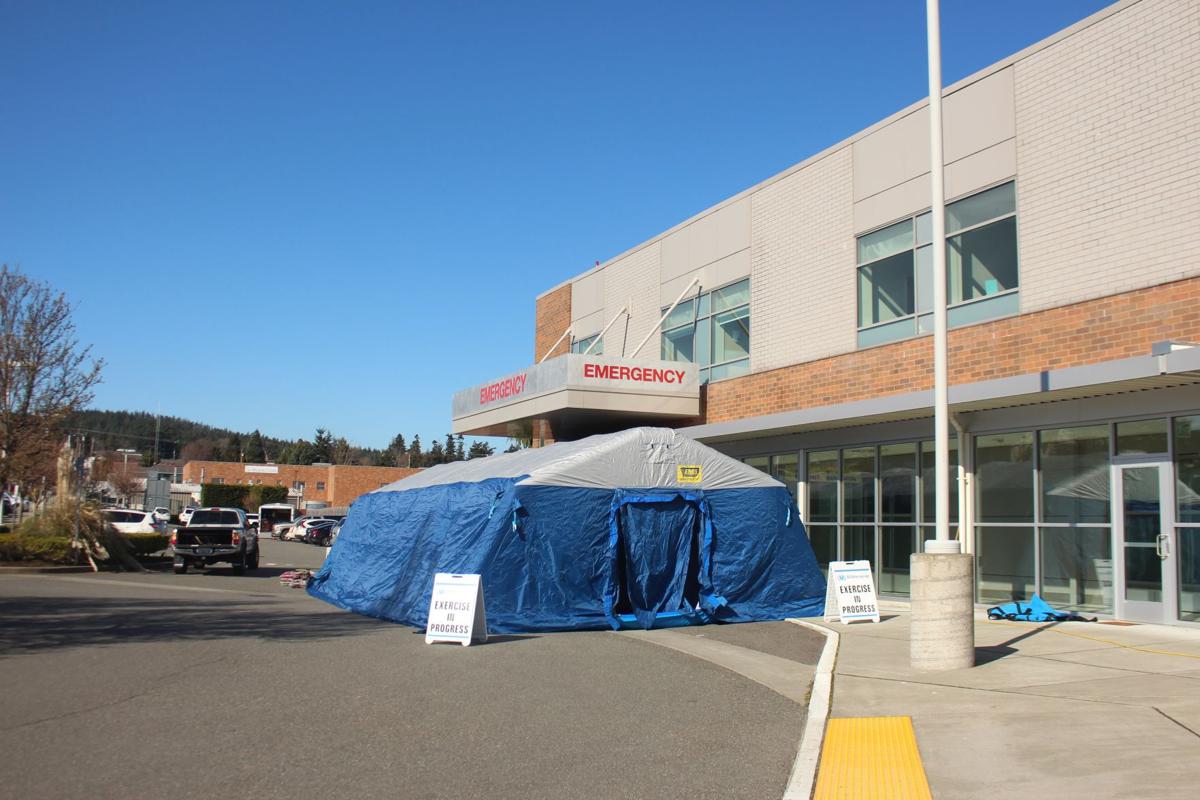 Island Hospital erected a tent outside its Emergency Department on Monday, March 9, as a preparation for a possible influx of patients with symptoms that could indicate the novel coronavirus COVID-19. 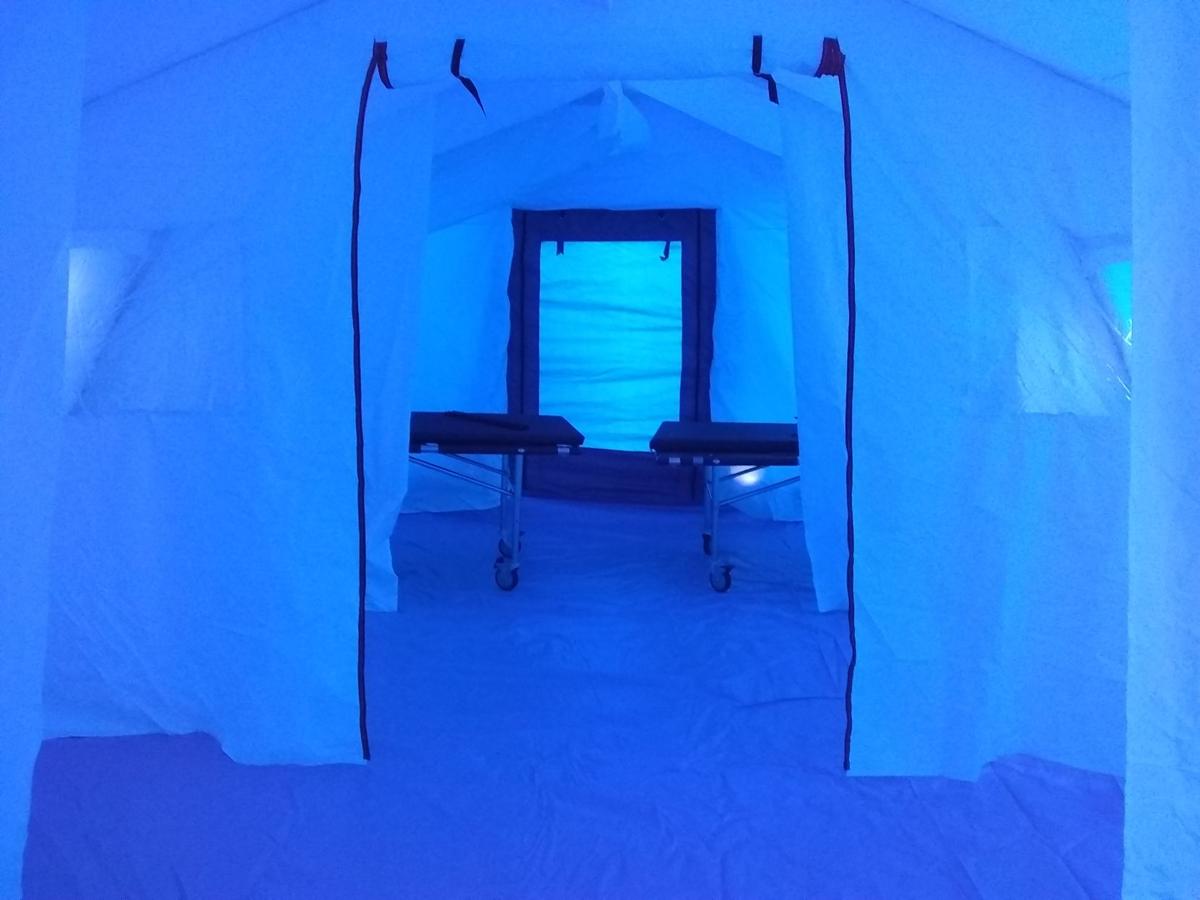 This is the view inside of the emergency tent erected at Island Hospital in case there is an influx of patients with possible symptoms of the novel coronavirus COVID-19. Once in use, it will have gurneys, chairs and an intake area for patients.

Island Hospital CEO Charles Hall helps set up an tent outside of the Emergency Department on Monday, March 9, in the event it is needed to triage patients who show symptoms of a possible novel coronavirus known as COVID-19. As of this date, no one in Skagit County has tested positive for the virus.

Island Hospital erected a tent outside its Emergency Department on Monday, March 9, as a preparation for a possible influx of patients with symptoms that could indicate the novel coronavirus COVID-19.

This is the view inside of the emergency tent erected at Island Hospital in case there is an influx of patients with possible symptoms of the novel coronavirus COVID-19. Once in use, it will have gurneys, chairs and an intake area for patients.

Word of Skagit County’s first confirmed case of novel coronavirus COVID-19 came Tuesday afternoon from Skagit County Public Health, along with a new set of protocols that aim to slow spread of the virus and will have an impact on area residents.

The news of a woman in her 40s who tested positive came several hours after Skagit County made an emergency declaration and after the Anacortes School District announced a month-long cancellation of sports and other student activities. The Public Health press release stated that it’s believed the woman got the virus through community transmission, though no other specific information was given.

A case confirmed Sunday night in Stanwood made it clear this week that the virus was marching closer to Skagit County. That case involved a patient at Josephine Caring Community facility who tested positive for the virus. On Tuesday, Snohomish County officials reported that two more people at Josephine had the virus and results were pending on five more.

The cases were a concern for Skagit County. Nine students and two faculty members from the Skagit Valley College Certified Nursing Assistant program had been participating in clinical instruction at St. Josephine since early February, according to a press release Tuesday from the college. No students had been tested, but as a precaution, the college closed all of its campuses Tuesday and announced it would finish the quarter with online classes.

The new cases at Josephine came on the heels of outbreaks at other nursing homes in the Seattle area, including 19 deaths associated with Life Care Center in Kirkland and several cases at Issaquah Nursing & Rehabilitation Center. King County Public Health had confirmed 74 new coronavirus cases Tuesday, bringing the state total to 267 cases and 24 deaths.

Here in Anacortes, Mayor Laurie Gere said that as of Wednesday, the Anacortes Senior Activity Center is closing indefinitely to help prevent spread of the virus among senior citizens, who are among the most at-risk populations.

“The seniors — we need to do everything we can to keep them healthy,” she said after yet another meeting Monday with health officials and others involved in keeping the community safe.

Even though the center is closed, Meals on Wheels will continue to deliver meals to homes around town. Any senior who relies on daily lunches at the center can still pick up frozen meals to go, but should call the center first to make arrangements.

Meanwhile, the Anacortes School District sent out a notice that all sports, dances, plays, overnight field trips and information meetings are cancelled March 12 through April 12. Building use by community partners is also suspended.

There are no plans to close the schools, but Superintendent Mark Wenzel said in a press release that a probable or confirmed case in an Anacortes school would prompt a 48-hour closure for a deep clean.

“If we have evidence of potential spread to other schools, we will close all impacted schools. Per health department guidelines, our intent would be to open the schools after the thorough cleaning,” the release states.

Before Skagit County’s first case was announced, county health officer Howard Leibrand issued a series of updated recommendations to reduce the spread of the virus.

Those included urging people who are over 60 or have underlying health conditions to stay home. Pregnant women are also in the high-risk group.

Leibrand recommended social distancing and the postponement of all nonessential gatherings of more than 10 people and encouraged employers to allow employees to work from home when possible.

He did not, however, recommend that schools be cancelled, saying many young students would be sent home without supervision or could not engage in online classes.

Leibrand said the recommendations are the county’s best bet at slowing the outbreak. This helps to avoid overloading the healthcare system and, based on research on similar outbreaks, reduces an epidemic’s mortality rate.

“The actions we take today … will save lives,” he said.

Leibrand, Gere and other officials involved in community safety have been meeting regularly to plan response to the virus.

Gere urged people to avoid large gatherings and said anyone planning events that involve large groups should consider postponing them.

“It’s a suggestion today, but I think people need to take it seriously. It’s a strong suggestion,” she said of postponing events. “People should be proactive.”

Island Hospital has not yet seen an influx of patients, but was getting ready just in case.

As a large blue and gray tent was erected outside the Emergency Department on Monday morning, CEO Charles Hall noted that it had been a while since he had seen such tents put to use at a hospital, but they serve a purpose when needed.

The big tent was set up to receive patients, and some smaller tents set up in a grassy area nearby would help move potential COVID-19 patients away from others while they are being assessed.

Island Hospital was the second to erect such tents in Skagit County. In Mount Vernon, Skagit Regional Health began setup late last week. At PeaceHealth United General in Sedro-Woolley, the focus has been on limiting public access, as in restricting visitors to minimize the number of people walking through.

“We will reduce access to four main entrances,” Hall said. “We will be screening at every entrance.”

Patients, staff and visitors entering the facilities will be asked health questions and given a sticker to wear while in the building. If they leave and come back another day, they will go through the process again, he said.

Those changes will begin this week, he said after the Skagit County case was confirmed.

The goal of all public officials at this point is to contain the outbreak, even as they hope COVID-19 will quickly fade away.

Hall noted that while COVID-19 may end up being no more dangerous than the flu, influenza kills people every year despite availability of vaccines. There is no vaccine yet to protect people against this new virus, and making one will take months or a year, officials have said.

Health officials are learning more about the virus daily, so the guidelines keep evolving.

Skagit County Public Health sent updates Monday to regional health officials in accordance with the state Department of Health. Some changes involved removal of any restrictions on when to test for COVID-19 as more test kits have come available. However, the update noted that only a few labs are handling the tests.

Therefore, at-risk people should get highest priority for testing. Those include health care workers, patients in public safety occupations, patients in an illness cluster in a facility such as schools or shelters, people with severe lower respiratory illness, patients with worsening symptoms, people over age 60, people with underlying medical conditions and pregnant women, according to the latest guidelines.

Gere and Hall said anyone feeling sick should stay home, and if necessary, should call a doctor or call ahead to a walk-in clinic or the hospital before coming in for treatment.

Gere said the hope is to help get the virus outbreak under control so that people can get back to enjoying the springtime.

“Maybe it’ll just be through March or the next couple weeks at least,” she said. “I think it will become really clear in the next few days.”

See a partial list of closures and schedule changes due to COVID-19 concerns.

Here are some local announcements related to COVID-19: