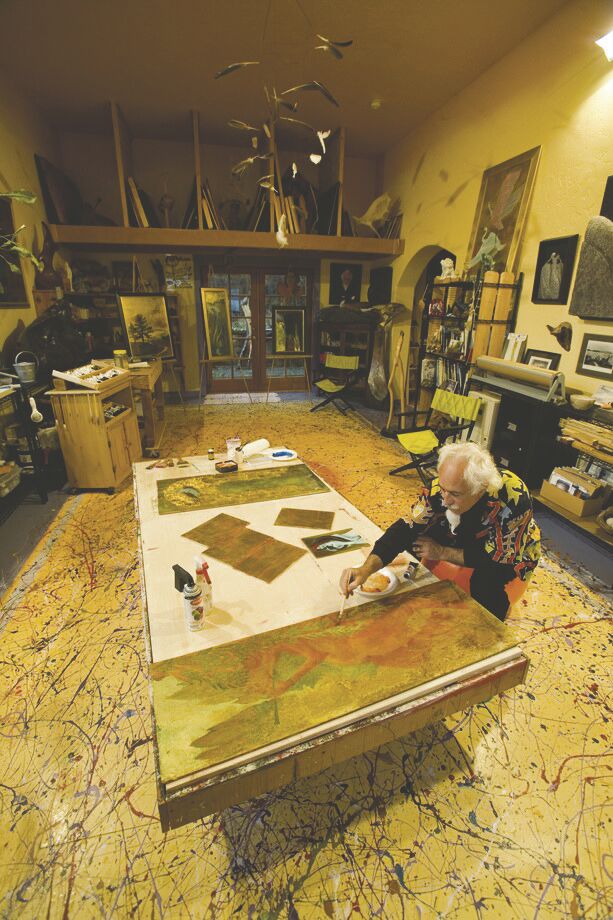 Leo Osborne works in his studio on Guemes Island. He has been an artist his whole life and has been creating art in the Anacortes area since the 1990s. 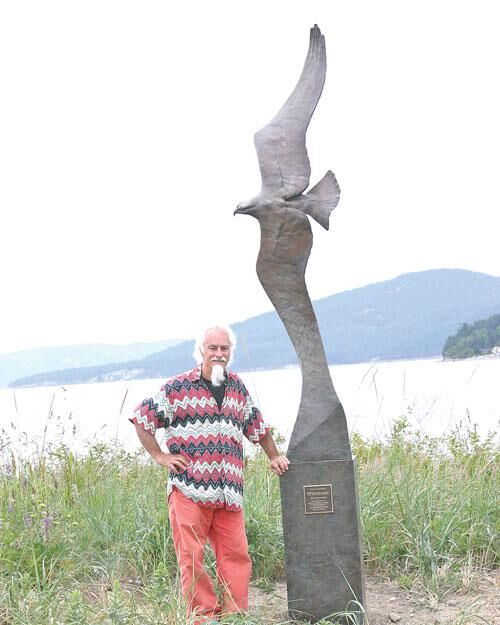 Leo Osborne stands with Windsong, his sculpture at the Kiwanis Waterfront Park, when it was installed in 2007.

Leo Osborne works in his studio on Guemes Island. He has been an artist his whole life and has been creating art in the Anacortes area since the 1990s.

Leo Osborne stands with Windsong, his sculpture at the Kiwanis Waterfront Park, when it was installed in 2007.

A tall bronze bird stands in Kiwanis Waterfront Park next to the Guemes Island ferry terminal, its wings stretching up into the sky. The artist who created it, Leo Osborne, lives and works just across the channel on Guemes Island.

Osborne, who moved to the area in the early 1990s after speaking with late artist Philip McCracken, said he feels Fidalgo and Guemes islands provide the perfect level of artist inspiration.

“I love the natural world that exists here,” he said. “The old-growth forest, the wildlife. It’s amazing.”

Osborne has created sculptures, paintings, poetry and other writings inspired by life around him.

“I can’t imagine having done anything else in my lifetime,” he said.

“Leo is one of those multitalented artists who paints, sculpts and writes poetry,” she wrote in an email. “I would say that his work is sensitive to the world around him and grounded in the natural world … at the same time having elements of simplicity and complexity. Leo is very community-minded and generous with his talents.”

“He is one of the most talented artists I know,” she said.

Khile said Osborne is one of those people who can see a large piece of big, dirty wood and know exactly what he can make out of it.

“He has a vision for art,” she said. “It’s his creativity and his level of authority that takes over each medium he uses. He goes all in.”

The gallery has shown paintings (with techniques Khile has never seen before) and sculptures from Obsorne, as well as poems written by Osborne that go along with the pieces.

Khile said Osborne is also in tune with the community, donates pieces to auctions and is a great supporter of the arts, Khile said.

Osborne grew up in Massachusetts before moving to Maine. In both states, he was immersed in artistic communities and discovered a love of art at a young age, thanks in part to his artist mother.

“As a child, I would draw all the time,” he said. “I was inspired by my mother, creativity was important.”

Throughout his years, he’s been a sign creator, a painter, a carver and a writer.

He said of his career, “I’ve reinvented myself at least five times.”

In high school, which he said he didn’t enjoy, Osborne submitted work to the Art Instruction School of Minneapolis and started taking a correspondence course. He said it gave him a chance to focus on what he wanted to learn.

“I figured I could only take English and spend the rest of the day in the art room,” he said.

Osborne amassed a portfolio that he submitted to the New England School of Art in Boston.

He spent 3 1/2 years studying there, traveling each day from his home in Pembroke, Massachusetts.

During those years, he built a relationship with next-door neighbor David Caroll, a naturalist who was intrigued by turtles and animals.

“He instilled within me that desire to create things of the natural world,” Osborne said.

It was then that Osborne started to consider life as a professional artist.

As he graduated art school, he knew he wanted to be a painter. For a while, he took odd jobs to pay the bills.

Then he opened a sign shop and started to create signs commercially to support himself and his young family. He started by painting the signs, but a special job changed everything.

After he was commissioned to create a sign out of wood, he set out to make it using pine and a chisel, and his journey into woodcarving began.

Osborne did that for many years and along the way befriended someone who carved duck decoys. One day, Osborne decided to try carving a small songbird. By the time he was done, it looked very realistic.

Osborne started carving birds each evening, and when he had six or so he took them to a local art gallery. They quickly sold, and Osborne realized the possibility of creating art full time was becoming more realistic.

He kept carving signs but also worked on his wooden songbirds. He started exhibiting them and was in a few shows.

He gained enough notice that he could make a living off his bird carvings. He traveled to various shows with his then-wife and his daughter.

In 1984, Osborne got into the Birds in Art show with the Leigh Yawkey Woodson Art Museum in Wassau, Wisconsin, which showcases only 100 pieces from throughout the world. He met artists from Italy, Africa, Europe and Canada.

This year, he was accepted again into the Birds in Art show, marking the 20th time he was chosen by a jury to be a part of it.

Having become a member of the National Sculpture Society 40 years ago, Osborne said he’s shown his work throughout the world and has gone on “amazing journeys.”

At one point, he had the opportunity to show a piece in Beijing, China, in a yearlong exhibition.

As he was preparing to send his sculpture to China, Sascha Rockefeller called and offered $14,000 for the piece. That left Osborne with a decision to make.

“It was the middle of winter in Maine, and rent was due,” he said.

Osborne decided to send it to the show in China.

After a year of great reviews, the exhibition closed and his sculpture sold for $20,000.

That leap of faith worked out as have many others over the years, Osborne said.

One piece inspired by the Exxon Valdez oil spill traveled throughout the country for four years.

Through the years, Osborne has been featured at many local galleries, including the Scott Milo Gallery and the Smith and Vallee Gallery in Edison.

He’s been showing art for more than 35 years at the Howard/Mandville Gallery in Woodinville and has had shows at the Museum of Northwest Art in La Conner.

He has sold the town of Wenatchee 25 sculptures, which are displayed all over town.

Osborne has lived on Guemes Island since 2000 with his wife Jane, who he met years ago in Anacortes at a store she owned.

When they got together, they moved to Ellensburg for a while, but decided to move back to this area.

“I love it here,” Osborne said. “I love the environment, I love the artistic community. It’s so enriching, deep and powerful.”

During a visit to the area, they were on the ferry to Guemes Island and discovered they were sitting next to a real estate agent. They ended up seeing a house and bought it within the next 24 hours.

Osborne’s studio space is Milkwood Studio, named after both the studio space he had in Ellensburg in an old Darigold milk building and the Dylan Thomas poem “Under Milk Wood.”

Osborne has never had an agent or a manager.

“I feel like it has been a wonderful experience,” he said. “I haven’t had to sell my soul to accomplish life as an artist.”

“You are gonna have to love what you do,” he said. “Chances are, it’s not going to be easy.”

Self-discipline is a must, he said.

“There are times that you will want to hang it up and that you don’t want to do it anymore,” he said. “You have to keep that inspiration and keep following that path.”

Osborne doesn’t use digital media much, but encourages new artists to embrace the technological world as a useful tool.

Of course, art starts with the basics, he said.

It doesn’t matter what artistic medium someone is pursuing, Osborne advises starting with learning to draw.

His first year of art school was completely dedicated to drawing. He practiced so often, he could draw without looking at the paper.

“It was a way of tying our mind, our eye and our hand together,” he said.

Osborne is proof that an artist can explore any number of ways to express creativity.

His interest in writing goes back to his teenage years, when David Caroll inspired him to write and create books.

But it was only recently, during the COVID-19 pandemic, that he published his first book of poetry “The Cat & The Coracle.” He wrote and illustrated the book himself.

“It thrills me to no end to finally create a book,” Osborne said.