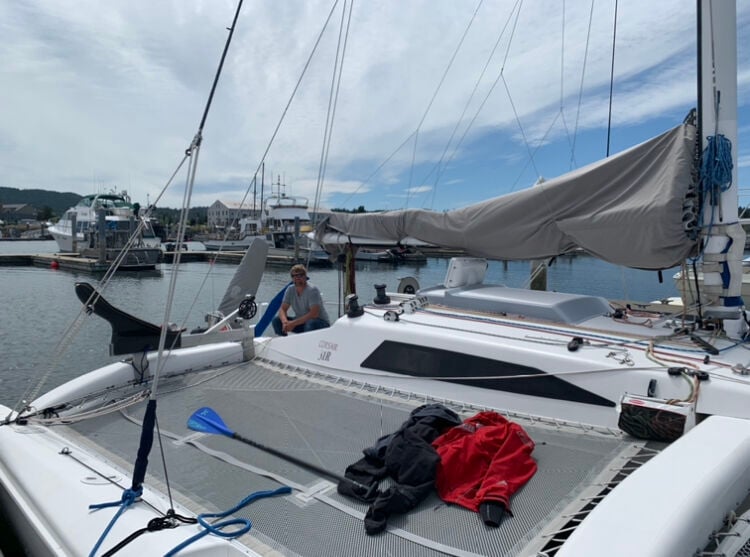 Lars Strandberg sits aboard the racing trimaran, making preparations for the WA360. 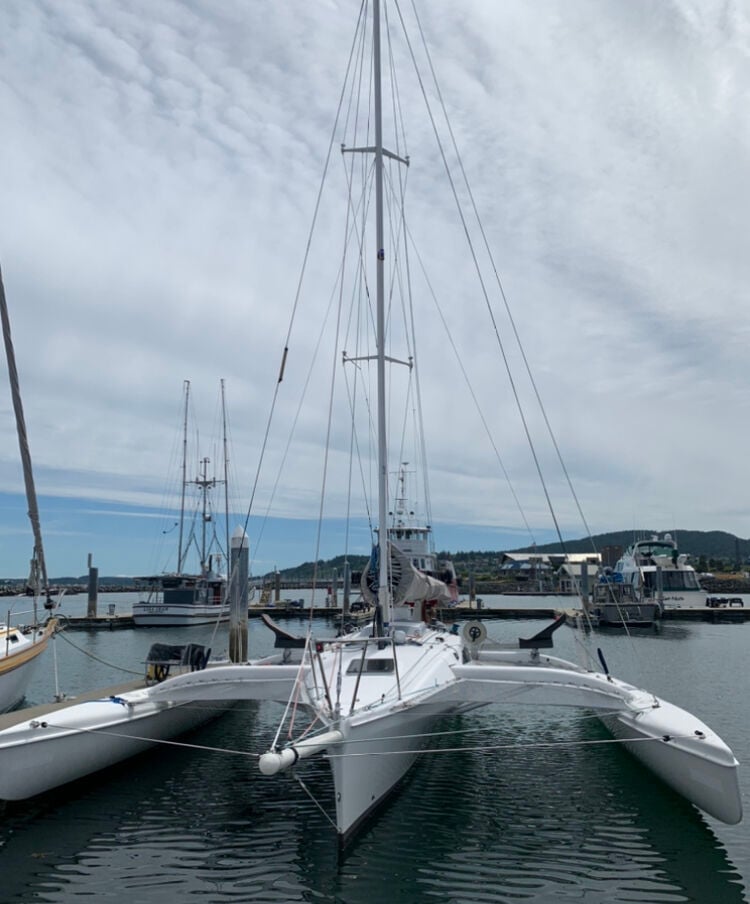 Racers in the WA360 must rely on non-motor propulsion. The Anacortes-based team Big Broderna will use this 38-foot trimaran.

Lars Strandberg sits aboard the racing trimaran, making preparations for the WA360.

Racers in the WA360 must rely on non-motor propulsion. The Anacortes-based team Big Broderna will use this 38-foot trimaran.

Big Broderna, a local sailing team, begins a new challenge Monday morning – the WA360, a newly formed race from Port Townsend around the Puget Sound and back.

Put on by the Northwest Maritime Center, WA360 is a stand-in for the annual Race to Alaska (R2AK), which was canceled because borders are closed to Canada due to the COVID-19 pandemic. It will, however, be a beast all on its own.

The Big Broderna trio is made up of locals Lars Strandberg, a commercial fisherman and original member of the team, businessman Jeff Dawson and boat builder Mars Le Baron, who worked on the New York Yacht Club sailboat American Magic for the 2021 America’s Cup race.

In 2017, Big Broderna took second place in the R2AK, with Lars Strandberg, Mars Le Baron, Nels Strandberg and Shawn Huston on the team.

On Thursday, Lars Strandberg was making final preparations on the 38-foot Corsair 31R trimaran, fitted with a pedal-drive propeller, including stocking up on snacks and coffee and removing excess weight.

“In light air, it’s pretty lethal and fast,” he said. “I think it will be a great weapon in this race.”

Every team must rely on engineless propulsion, including sails, pedals and paddles. There are three different classes in the race, so single paddlers don’t compete against a sailboat crew.

Part of the fun of the race is the human power element and “diversity in style,” he said.

The teams will have two weeks to complete the course, though Strandberg hopes to finish within three days.

Racers are allowed to bring a motor for emergency situations, though its use would disqualify the team. Big Broderna decided to forego the extra weight of the motor and fuel, Strandberg said.

He said they’ve got some good competition, including Turn Point Design, a team they raced during the R2AK.

Race organizers list “tidal rapids, localized weather systems, dramatic currents and terrifying seas” as among the challenges of WA360. Racers will start at Port Townsend and must go round Budd Inlet near Olympia, pass by Goat Island in Skagit Bay, round a Bellingham Bay buoy and head north to Point Roberts before finishing back at Port Townsend, around 360 miles in total.

Along the way to Bellingham, racers must make a choice: Sail through the tight Swinomish Slough or take the longer route via Deception Pass.

Both options have their own challenges, Strandberg said. Missing a tide window, for example, might cost them hours.

While he doesn’t have much familiarity with the southern Puget Sound, Strandberg has sailed kegs of Rockfish Brewery beer down to Seattle for a carbon-neutral Earth Day event.

He said their boat is more than capable of handling the Strait of Georgia and Strait of Juan de Fuca.

Strandberg said it will be interesting to keep up with the race on the online tracker. He expects many lead changes in the beginning, but after “hopes it will be a blowout”– with Big Broderna ahead, of course.

The race begins at 6 a.m. sharp on Monday, June 7. Follow the action at nwmaritime.org/follow-wa360.