Dave and Becky Young’s house on Kingsway can be seen from at least a block away, with its colorful and bright display of winter scenes, cartoon creatures and seasonal messages. 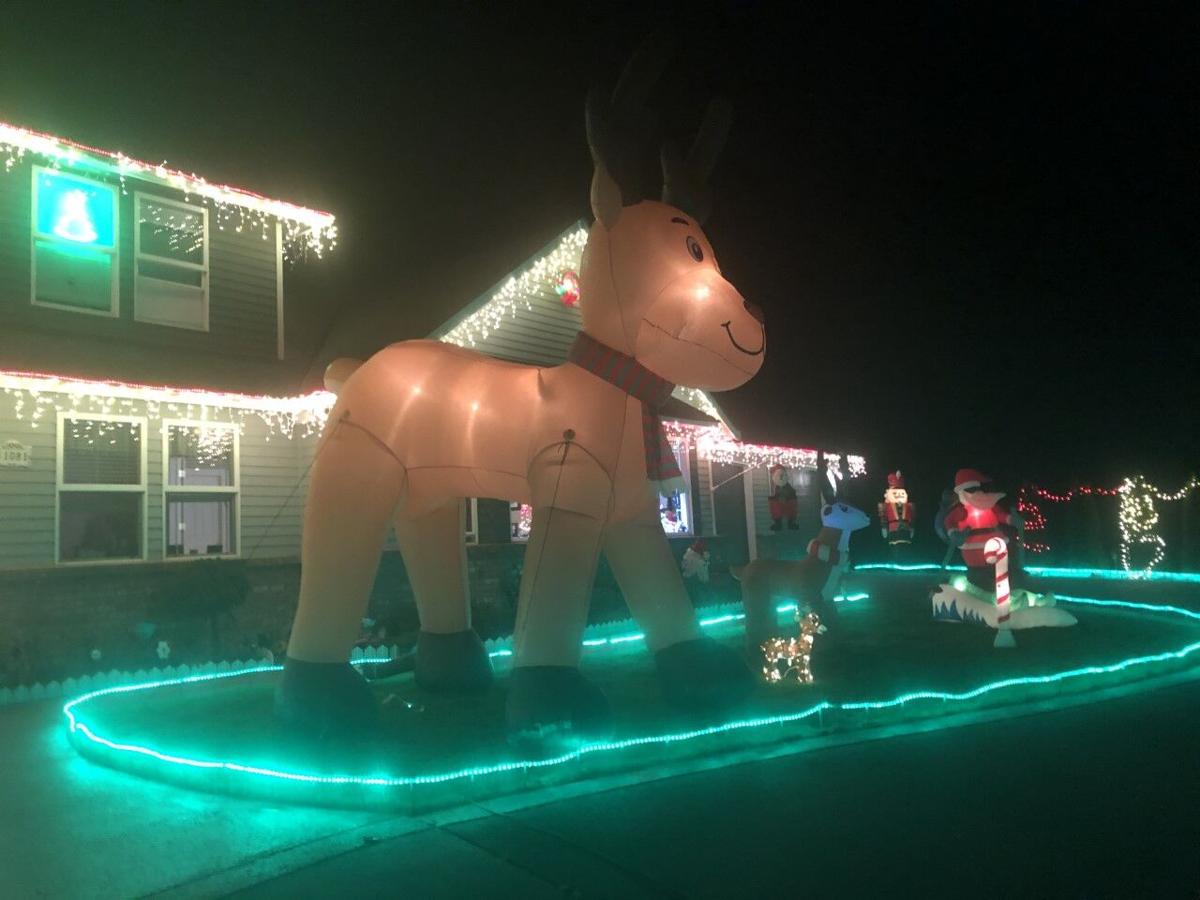 Kari Wooding-Knudson, on Havekost Road, has been decorating for about 24 years now, though she took a few years off because of vandals. This year, she added a 15-foot reindeer at the center of her drive-thru display. 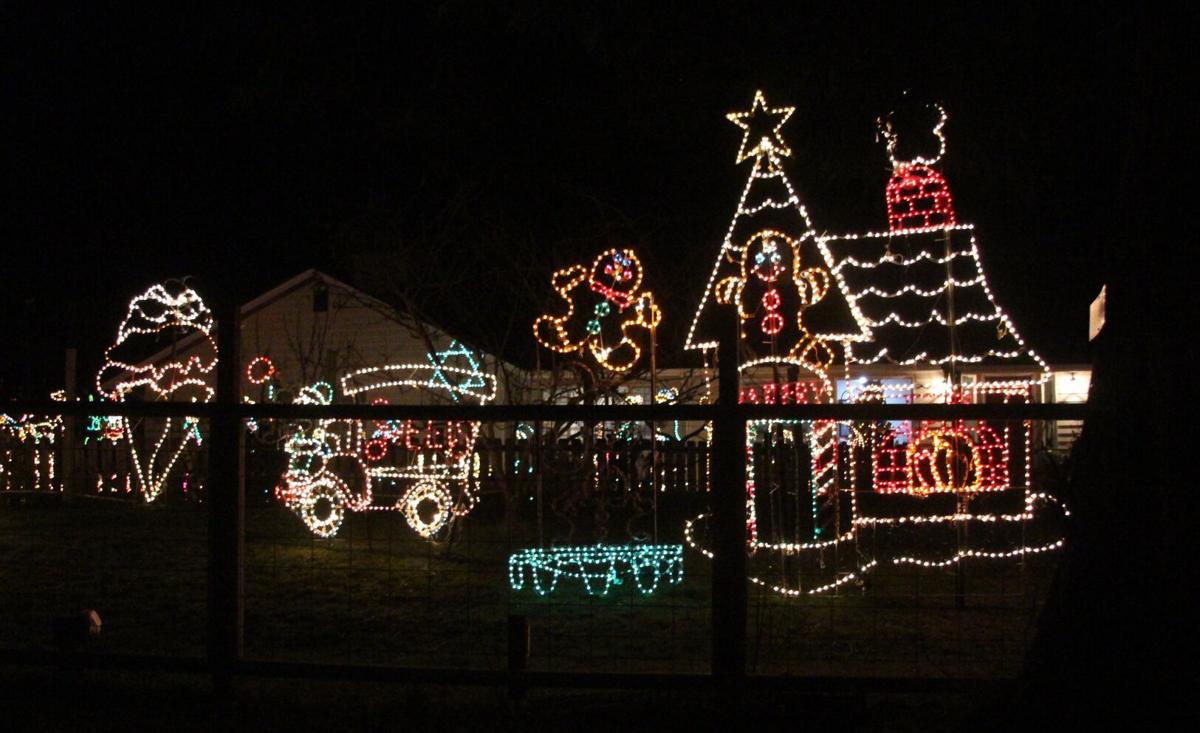 The Noltensmeyers make their own decorations for their display on Biz Point Road.

Dave and Becky Young’s house on Kingsway can be seen from at least a block away, with its colorful and bright display of winter scenes, cartoon creatures and seasonal messages.

Kari Wooding-Knudson, on Havekost Road, has been decorating for about 24 years now, though she took a few years off because of vandals. This year, she added a 15-foot reindeer at the center of her drive-thru display.

The Noltensmeyers make their own decorations for their display on Biz Point Road.

Driving through the streets of Anacortes this time of year means seeing colorful lights gleaming from the fronts of houses. Plastic Santas wave, fly planes and pop out of chimneys as fake icicles drip from eaves.

Christmas light displays are on many houses throughout town, but there are a few homes whose glow can be seen from quite a ways away.

Houses on Biz Point Road, Kingsway and Havekost Road are decked out with plenty of lights and decorations this year. The owners of both homes say they love the lights, the season and, most of all, making people smile.

“It’s extra special this year, with the virus, because this is one thing people are able to do,” said Dave Young, whose Kingsway home is decorated each year. “There are a lot of great displays this year.”

Ken and Nora Noltensmeyer have been decorating their house with handcrafted displays for about 25 years.

Ken Noltensmeyer said he is inspired to keep going by his own childhood memories of Christmas lights. He started with some lights in the trees and icicles on the house.

“Then it grew over the years,” he said.

For the Noltensmeyers to create their displays, Nora builds a patter and then Ken bends steel rods into the shapes they want. Their first piece was a star for a manger scene. Then, the couple kept adding to the collection. In past years, children would remark on something missing from the display and the Noltensmeyers would add it.

Ken Noltensmeyer said his favorite piece is a tower featuring a cupcake and a cherry, and his wife’s is a giant teddy bear toy shop.

Sometimes bad weather interferes, Ken Notensmeyer said. If it’s dark when people drive by, he encourages them to try a different night to see the lights.

Kari Wooding-Knudson has been decorating her Havekost Road home for almost 25 years. Her green light-lined driveway is a sort of drive-thru holiday attraction filled with blow-up Santas, snowmen, penguins and, at the center, a 15-foot-tall reindeer.

“I love when other people see the lights and are just so happy,” she said.

She’s received letters in the mail, and people have stopped by to tell her that they love her display.

It’s a lot of work, but it’s worth it to see the joy on people’s faces, she said.

Wooding-Knudson said she started decorating when her daughter was a baby and kept adding to her collection over the years.

For a while, vandals stole her Christmas spirit. People kept ruining her inflatable figures, by slashing and popping them. For the last couple years, though, she’s decided to restart her annual tradition.

Some of the figures are from or in honor of her sister, Lisa, who died a couple of years ago. Lisa loved to decorate, Wooding-Knudson said. An inflated angel is in Wooding-Knudson’s yard in Lisa’s memory.

Wooding-Knudson encourages people to drive through the display, which has enter and exit signs leading off of Havekost Road.

People drive through all times of day, because the displays are still pretty in the daylight, Wooding-Knudson said. She estimated between 30 and 40 cars drive through a day.

Dave and Becky Young decorate their house and yard on Kingsway with roughly 18,000 lights. This weekend, Dave Young was giving people candy canes as they stopped to admire the lights on the house and in the yard.

“We started about 13 years ago decorating and we just added a few lights every year,” he said. “We are just enjoying what we do.”

It usually takes four or five days to set up, including repair work. He has a drawing of where things go in the yard and a spreadsheet about how much power each part uses. He uses those and photos as a guide of where to put things, but he and his wife move things around to make the display perfect.

“Ever since I was a little kid … I just love to see lights, whether it’s a lot or a little bit,” he said.

He said he also enjoys driving around and looking at the displays around town.

His favorite part of his own display is Snoopy on his doghouse, which is connected by lights up to a plane on the roof of the Young’s house. He said he made that part of the display.