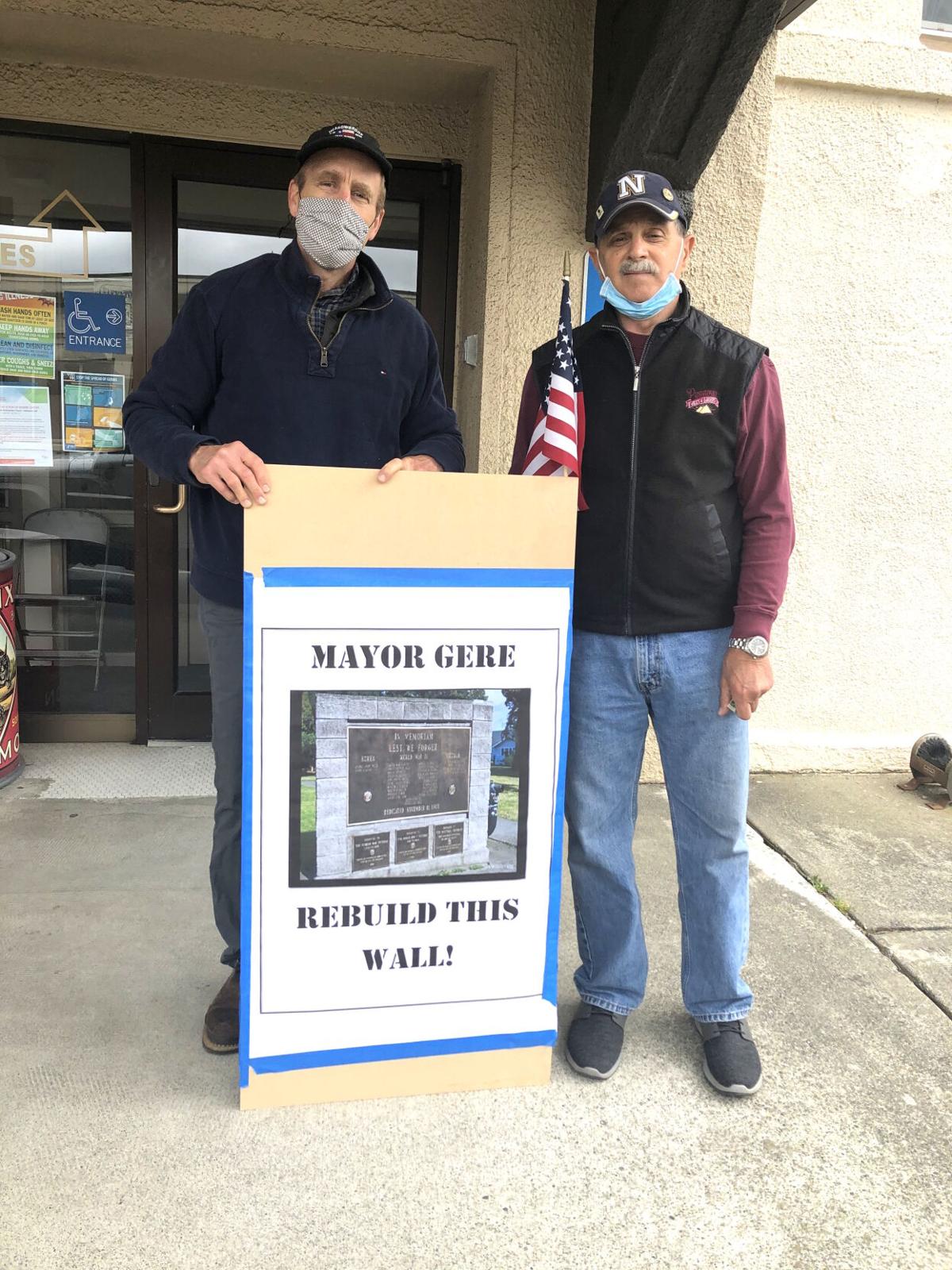 Local residents gathered in front of City Hall on July 16 to talk to the mayor about rebuilding a war memorial at Causland Park that was removed this spring. At right is Ed Capasso, a Vietnam veteran who wants the wall restored to its original design. 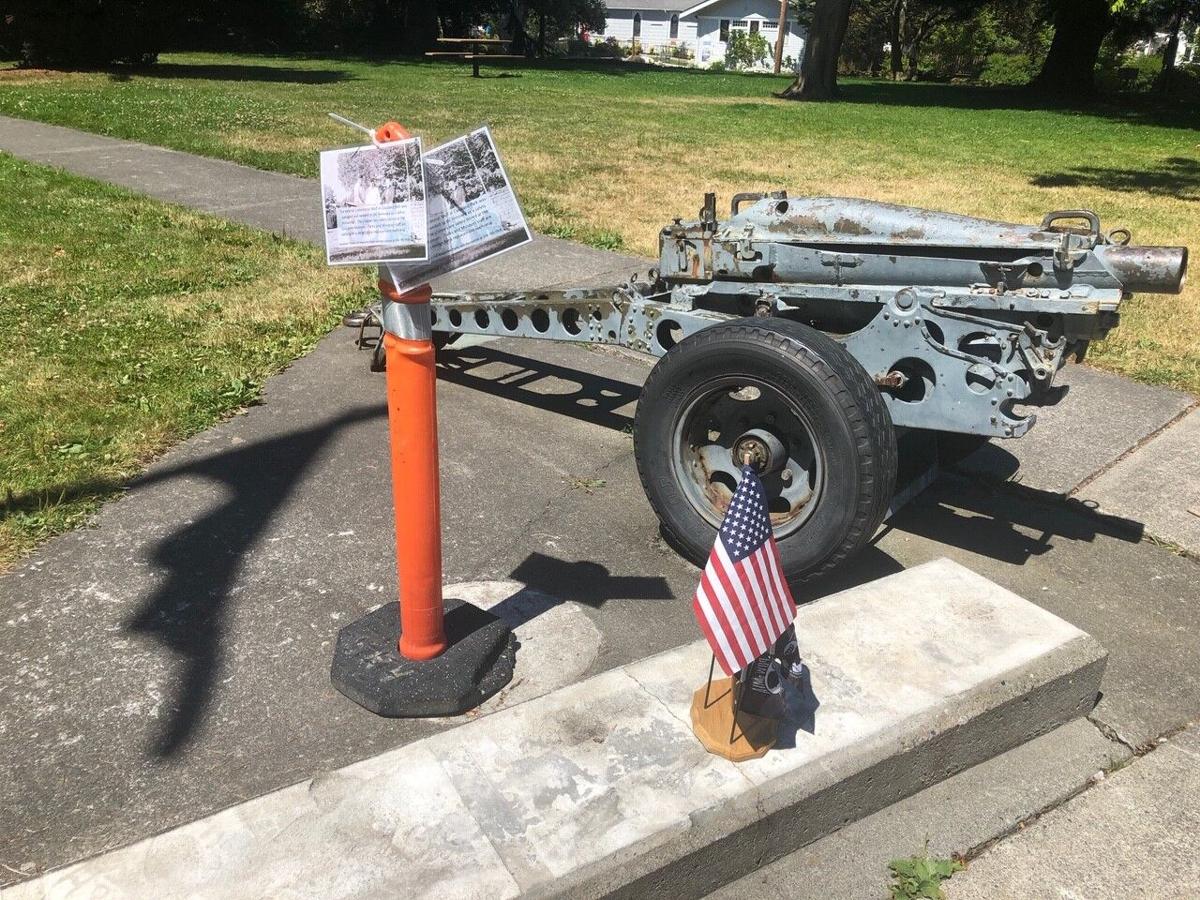 A war memorial at Causland Park was removed after it was damaged.

Local residents gathered in front of City Hall on July 16 to talk to the mayor about rebuilding a war memorial at Causland Park that was removed this spring. At right is Ed Capasso, a Vietnam veteran who wants the wall restored to its original design.

A war memorial at Causland Park was removed after it was damaged.

A veterans memorial wall at Causland Memorial Park was removed this spring due to damage, and the city plans to replace it. But questions remain about when that will happen and what the replacement will look like.

Some residents prefer it be restored exactly as it was, only stronger.

The absence of the memorial wall stirred questions about the circumstances that led to its removal and whether it would return.

On July 16, a group of veterans and community members met with Mayor Gere outside City Hall to inquire about plans for the memorial. The group carried flags and a poster with a photo of the original memorial and demanded it be returned to its location just as it was. The memorial was dedicated by Mayor Jim Rice on Nov. 11, 1988, and featured the names of service members lost in the World War II, Korea and Vietnam.

A lawnmower operated by park staff backed into the memorial wall in the spring, Parks and Recreation Director Jonn Lunsford said. The impact, though slight, revealed the structural compromises in the wall.

“It’s unfortunate that we damaged the wall with our mower. It was just a slight contact, but the wall broke,” he said. The wall lacked rebar anchoring and had become unstable, and the concrete foundation it sat upon had formed a large crack. “When we regrettably hit that wall we looked at: Could we repair it? Could we tie it into existing rebar or anchoring system? Since that wasn’t in that wall, I made the call to err on the side of safety and take it down.”

The plaques from the wall are currently stored in the Anacortes Museum for safekeeping, he said. Lunsford is working on designs for a new memorial wall that both respects the history of the park and honors veterans.

“We’ll have to take things out anyway to put something back. Since we’re going to that effort, now that we’ve done this, let’s look at making some changes that will last for 100 years going forward and serve some of the uses that have evolved over time at the park,” he said.

The design will be run by the Parks and Recreation Advisory Committee and then brought to the public for feedback and comments.

“We’re at the very beginning of that process,” Lunsford said.

The timeline for erecting a replacement hinges on a few factors.

The first step is to complete a design and have it approved; the next step is to secure funding.

“If funds could be raised to do that in a historic and longlasting way, it could happen quite quickly,” Lunsford said. “If funds take a little longer, because people are understandably trying to make ends meet, then it would take a little bit longer. But we think we can, through fundraising, if people are supportive, we can raise those funds hopefully rather quickly and get the wall up as soon as we can.”

He said it depends on the response to the project. Lunsford is also working with a local group to help restore the historic cannon that sits next to the area the wall had been. The rims on the wheels of the cannon have started to rust out, and Lunsford hopes the two projects can occur simultaneously.

The group that met with Mayor Gere, however, would prefer to see the wall return exactly as it was but with stronger anchoring into the ground. The common sentiment from the group is that the wall served as a headstone to all whose names appeared on it and its historic value should be honored by restoring the wall in its original form.

“The Memorial Wall must not now be treated as if it were some piece of furniture that some find the upholstery now objectionable, and so it must now be redone to their liking,” he said in his speech made on the sidewalk outside City Hall on July 16.

He said in an interview with the American that he still feels that way. He wants the wall restorated exactly as it was built and at the same site. He also would like to see benches added around the site as well as a brass memorial plaque, plus a yearly departmental budget allocation to ensure the wall is maintained.

He also called for an insurance claim to city insurance, the cost of which he wants to see taken from the Parks Department’s budget.

The reasoning behind creating a new monument rather than restoring the original wall comes down to a need to ensure the memorial be longlasting with strong supports and to match the park’s overall stonework architecture, Lunsford said.

“We think we can achieve a wall that honors the veterans, honors the construction of the park for vets of World War I and is longlasting. That’s our goal,” he said. Included in the redesign of the wall is the addition of a small plaza around the monument, cannon and flagpole where ceremonies can be held.

In an email to the Anacortes American, Mayor Gere said the city’s intent has always been to honor veterans.

“Honoring those who gave so much is important to all of us in this community,” she wrote.