Superintendent Justin Irish, right, joins with his senior leadership team and the Anacortes School Board to talk to parents and community members about what has been happening at the district this year, the roadblocks on the way to in-person learning and expectations for the next school year. 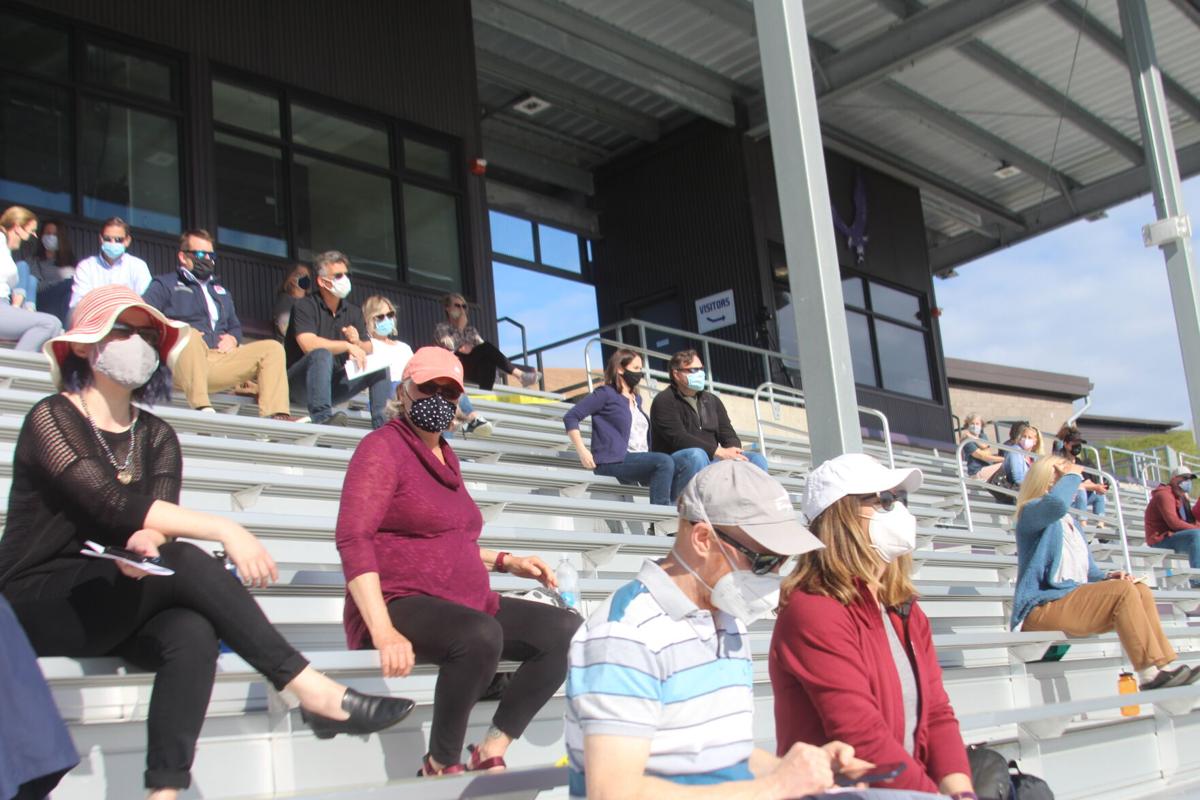 A group of community members listens to updates from the superintendent at a district town hall meeting. 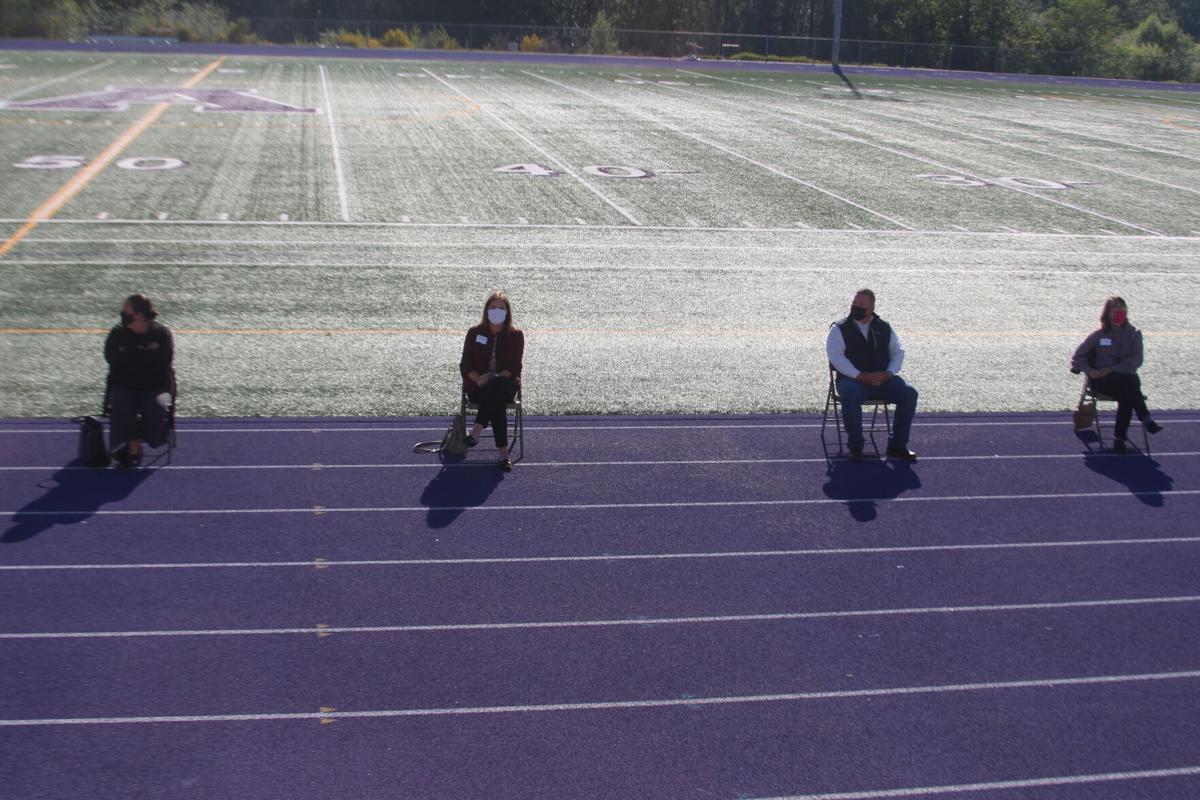 Superintendent Justin Irish, right, joins with his senior leadership team and the Anacortes School Board to talk to parents and community members about what has been happening at the district this year, the roadblocks on the way to in-person learning and expectations for the next school year.

A group of community members listens to updates from the superintendent at a district town hall meeting.

The Anacortes School District will have students back all day, every day in the fall, Superintendent Justin Irish told an assembled crowd of parents and community members at a district town hall meeting May 12.

The crowd at Seahawk Stadium, which was joined virtually by others watching via livestream, applauded Irish’s statement.

“The governor has ordered us to do that; we will find a way to make that happen,” Irish said. “We are opening our schools five days a week in the fall — all students.”

The details are still in question, Irish said. The district is looking into all kinds of options, including putting in large tents at each campus to give students more space for distancing.

Guidelines released last week from Gov. Jay Inslee and the state Department of Health, addresses what the summer and fall classrooms may look like. That includes 3 feet of distance between everyone, with 6 feet of distance when masks are off, such as during meals.

“We want our kids in school. Period. Students need to be in school five days a week,” Irish said. “Nobody on … our entire team disagrees with this statement. We recognize that suspending in-person learning has consequences. Teaching and learning loss, mental health supports, social isolation. We recognize that other states have different guidelines for opening schools and are back at school full-time or more days a week than students in Washington state.”

The Anacortes School District has gone through several major changes throughout the 2020-21 school year. Schools began with remote learning, then some students were brought back for part of each week, and now having elementary school students are back for full days four days each week.

Middle and high school students cannot all return at the same time. There isn’t room in the buildings to meet the state requirement of 6 feet apart. That means secondary students, who change classes throughout the day and regularly interact with more than 20 or so students, must be at a reduced capacity to fit in classrooms.

At the elementary level, students can be kept in smaller groups because they stay in one room for the entire school day, he said.

The district needs to find ways to provide space for students to stay apart this fall, if those regulations are still in place, Irish said.

There is a good chance face coverings will still be required, Irish said. Meanwhile, the district will not require the COVID-19 vaccine for staff or students unless it becomes a state requirement.

The district, by law, must follow regulations set by both the state and the Skagit County Public Health Department.

Deviating from that authority would mean the district would no longer have coverage from its risk management pool and would leave the district open to litigation, Irish said. It also leaves the district vulnerable to workers compensation claims and labor issues.

Many parents at the meeting stood up and talked about why they think the district should bring students back.

He said he understands the concerns and frustrations, but there is little that can be done on a local level, except for relaying those concerns to Inslee’s office and state health officials.

Districts across the state are now bargaining with groups who are fighting against going back to school full-time, Irish said. That has not been the case in Anacortes. Staff groups here are working together to provide a safe environment for school employees staff while working toward more in-person education, Irish said.

That includes everyone from teachers and administrators to paraeducators and bus drivers, he said.

“All of us focused on students during this pandemic,” Irish said.

Wednesdays are still a remote day this year because that’s how the week was structured at the start of the year. The state required one day a week that the school buildings could be closed for deep cleaning. That requirement has been lifted, but work and class schedules have already been made to accommodate that empty school day, and it is too late in the year to completely change everyone’s work schedule.

Another hurdle has been declining enrollment. As of last week, the district has lost about 141 students from its projected enrollment numbers for the year. Many of those were kindergarten and first-grade students who were going to join the district but decided to wait a year, Irish said. Most of the others are from primary grades.

The lower enrollment numbers and resulting loss of $1.1 million in state funds meant the district was facing major budget cuts, including staffing. However, some enrollment and transportation stabilization money from the state, totaling just about $1 million, will help the district avoid those big cuts for next year, Irish said.

Some relief funding came in from the federal government to help cover COVID-19 costs, too, Irish said. The funding, which has totaled roughly $1.1 million, will help cover not only the costs of personal protective equipment and cleaning, but also the expense involved in providing the virtual school ASD@Home in the 2020-21 school year.

Though ASD@Home will end with this school year, the district will still offer completely remote options to families who want them, Irish said.

Another $2.2 million in federal funding expected this summer will go toward programs specifically in place to target learning loss that may have occurred since March 2020.

The goal is to help kids get caught up, Irish said.

The district is also making big improvements to its broadband system. This year, it has been unable to do everything it wanted because of limits to its network infrastructure. For example, it currently lacks the bandwidth for teachers to all simultaneously livestream their classes. The system was set up for general web browsing in short bursts, Irish said.

The upgrade will cost the district $327,000, of which $131,000 is coming from the tech levy funds approved by district voters, Irish said.

When it comes to tech, the district is also working with families who don’t have high-speed internet at home. It bought 100 hotspots for families that need access to internet, but there are still some parts of Guemes and Fidalgo islands where service is spotty, Irish said. So the district is working to find more solutions.