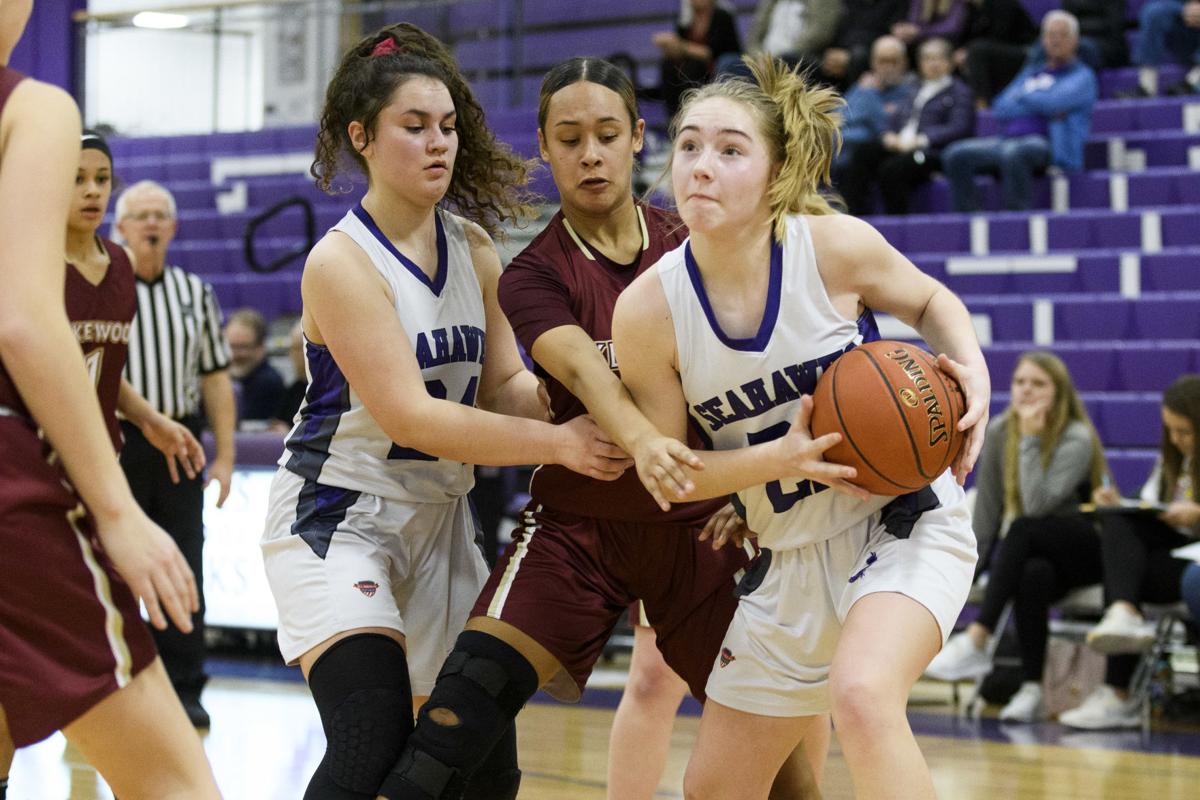 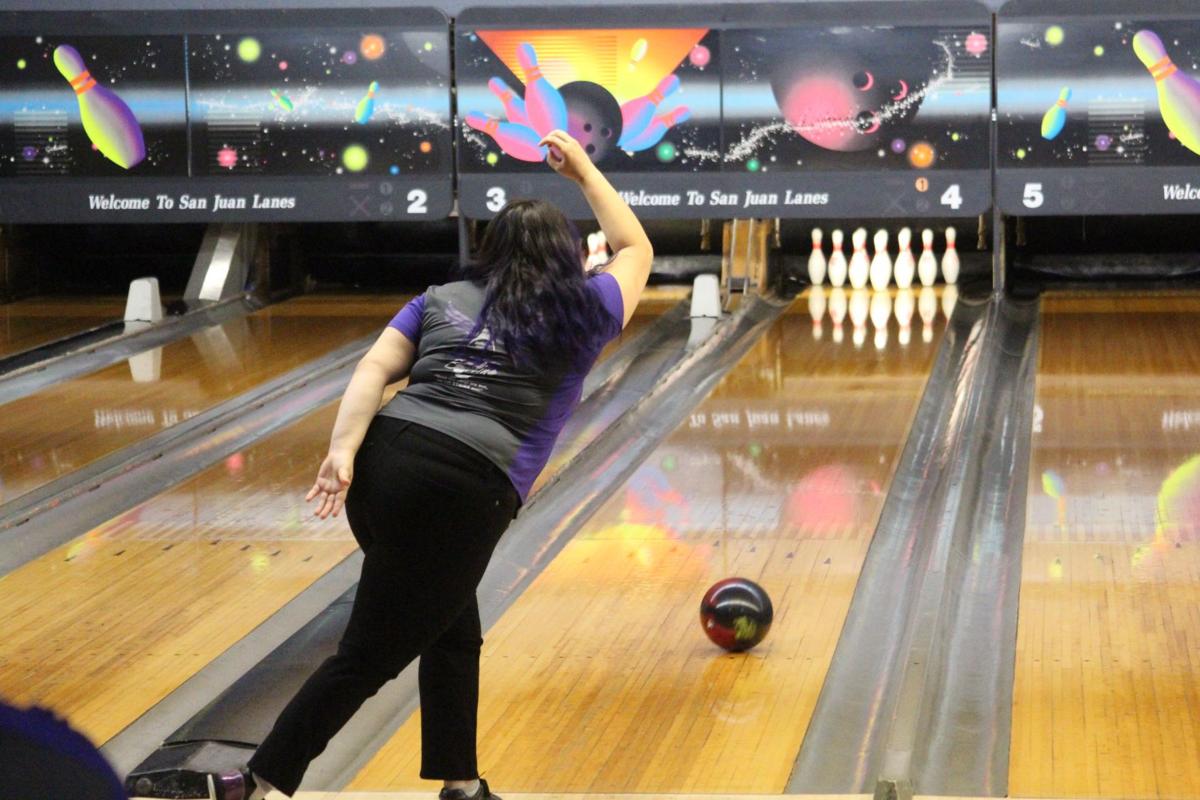 Senior Kendall Denman warms up before a match against Ferndale. Denman is one of six seniors on the team.

Senior Kendall Denman warms up before a match against Ferndale. Denman is one of six seniors on the team.

The Anacortes High School girls basketball team picked up two wins last week, including one of their best games of the season, according to coach Nate Dunham. The girls landed at a record of 3-6 in league and 5-11 overall.

The girls hosted Blaine Tuesday, but results were not available at press time. They play next at 7:15 p.m. Friday at Burlington-Edison and then host their final home game of the regular season at 7:15 p.m. Monday, Feb. 3.

Camryn Kerr scored a team-high 17 points, and Anacortes held its opponent to seven points in the second half Tuesday, Jan. 21, in a 59-24 win over Lakewood.

“We did a better job of controlling the tempo and upping our pressure,” Dunham said.

Alizee Hargrove played well and blocked several shots, and Lacie Petitclerc had an effective game distributing the ball, he said.

Of freshman Kerr’s scoring, Dunham said “She got a lot of good buckets down low off offensive rebounds and good passes from the perimeter. She did a good job finishing.”

Dunham said his team played three decent quarters in the Northwest Conference game and one they wouldn’t want to revisit Thursday, Jan. 23.

“The key to the game was (Lynden Christian) outscored us 28-4 in the second quarter,” Dunham said. “They are a very good team.”

“We showed a lot of composure in the second half,” Dunham said.

Camryn Kerr scored 21 points, Alizee Hargrove turned in a strong defensive effort and the Seahwawks played one of their best all-around games of the year Saturday, Jan. 25, Dunham said.

“Ferndale’s a really good team. They’re relentless with their pressure, with their physicality. For the most part we withstood that pretty well,” Dunham said.

The girls bowling team’s season is coming to the end of an overall largely successful season with back-to-back losses against Ferndale and Meridian last week. The team’s record is 7-4 in league and 8-5 overall.

The team competed in sub-districts at Riverside Lanes in Mount Vernon on Tuesday, up against Burlington-Edison, Blaine and Meridian. Results were not available at press time.

Six girls on the Anacortes team are seniors this year.

Coach Teresa Syms said three of those seniors were on the team when she took over coaching three years ago.

“Their dedication and improvement over the years has not gone unnoticed,” Syms said.

The team has accomplished a lot this season, she said, including scoring its highest series (total pins in one game between all five competing girls) with a 717.

The team also won its first point ever against Jackson High School, a competitive 4A varsity team from Mill Creek.

“I am so proud of the team this year,” Syms said.

The boys swim and dive team remains undefeated as the end of the regular season nears.

The Seahawks stopped the Tigers in a matchup of Skagit County teams Thursday, Jan. 23.

Anacortes’ Jacob Tallering finished second with a score of 313.65 points at a state qualifier Saturday, Jan. 25.

Anacortes fell twice last week and had a record of 3-5 in league and 7-8 overall coming into this week.

Tuesday results were not available at press time. Up next, they host Burlington-Edison at 7:15 p.m. Thursday and then play at noon Saturday at Ferndale and at 7:15 p.m. Monday, Feb. 3, at Mount Baker.

The Seahawks were within four points to start the final quarter, but the Cougars rallied to pull away Tuesday, Jan. 21.

“We had a good game plan for 27 minutes,” Anacortes coach Brett Senff said. “Then they (Lakewood) got more aggressive to the ball. I really can’t explain it.”

Jaden DeBoer hit a 3-pointer in the final seconds to give the Lyncs the Northwest Conference win Friday, Jan. 24, but Senff liked what he saw from his team.

Eaton led the Seahawks with 20 points.

The team competes at 7 p.m. today at the NWC Championship Duals and then hosts Oak Harbor at 6 p.m. Friday in the last meet of the regular season. Sub-regionals start Feb. 7.

The Cougars downed a shorthanded Anacortes team that was missing some of its top wrestlers, but Anacortes coach Michael Lomsdalen said he was pleased with how several of his younger competitors performed Wednesday, Jan. 22.

Joey Chonka got a pin at 120 pounds, he said. The freshman was wrestling his first varsity match. Another freshman, Garrett Bickley, earned a pin at 220 pounds.

“It was good to see that from them,” he said.

The Cubs rolled to a victory on Thursday, Jan. 23.

Anacortes was shorthanded due to injury, but got a win from Ayden Swain.