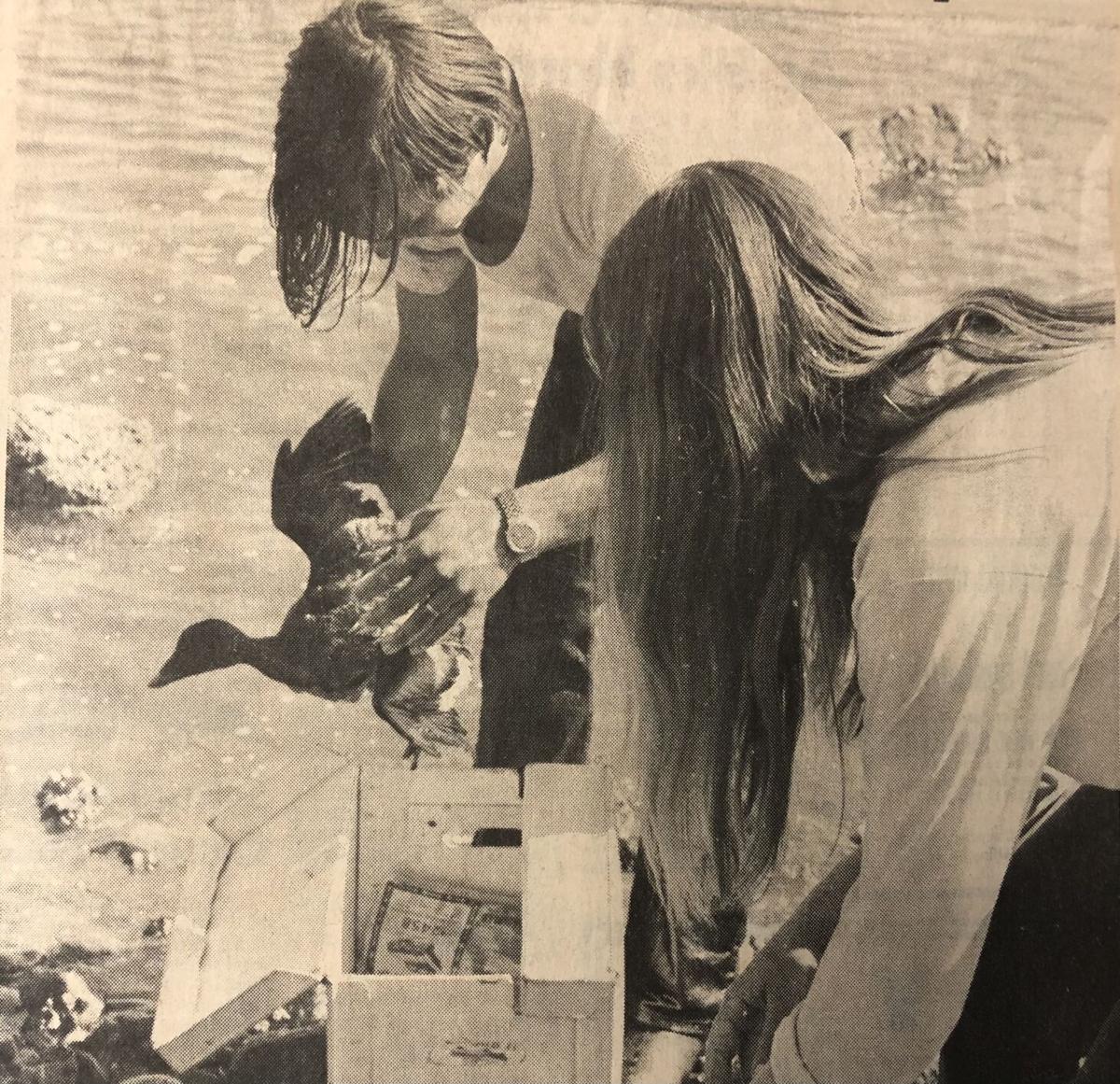 April 29, 1971: HUMANE EFFORT FOR WILDLIFE–Many of the Guemes Island young people were a busy lot Monday aiding in the rescue of the island’s waterfowl, victims of the 5,000 gallon oil spill that raveled through the Guemes Channel. Dennis Hilsinger is pictured with one of the victims in hand, gets a helping hand from Beth Mitchell. 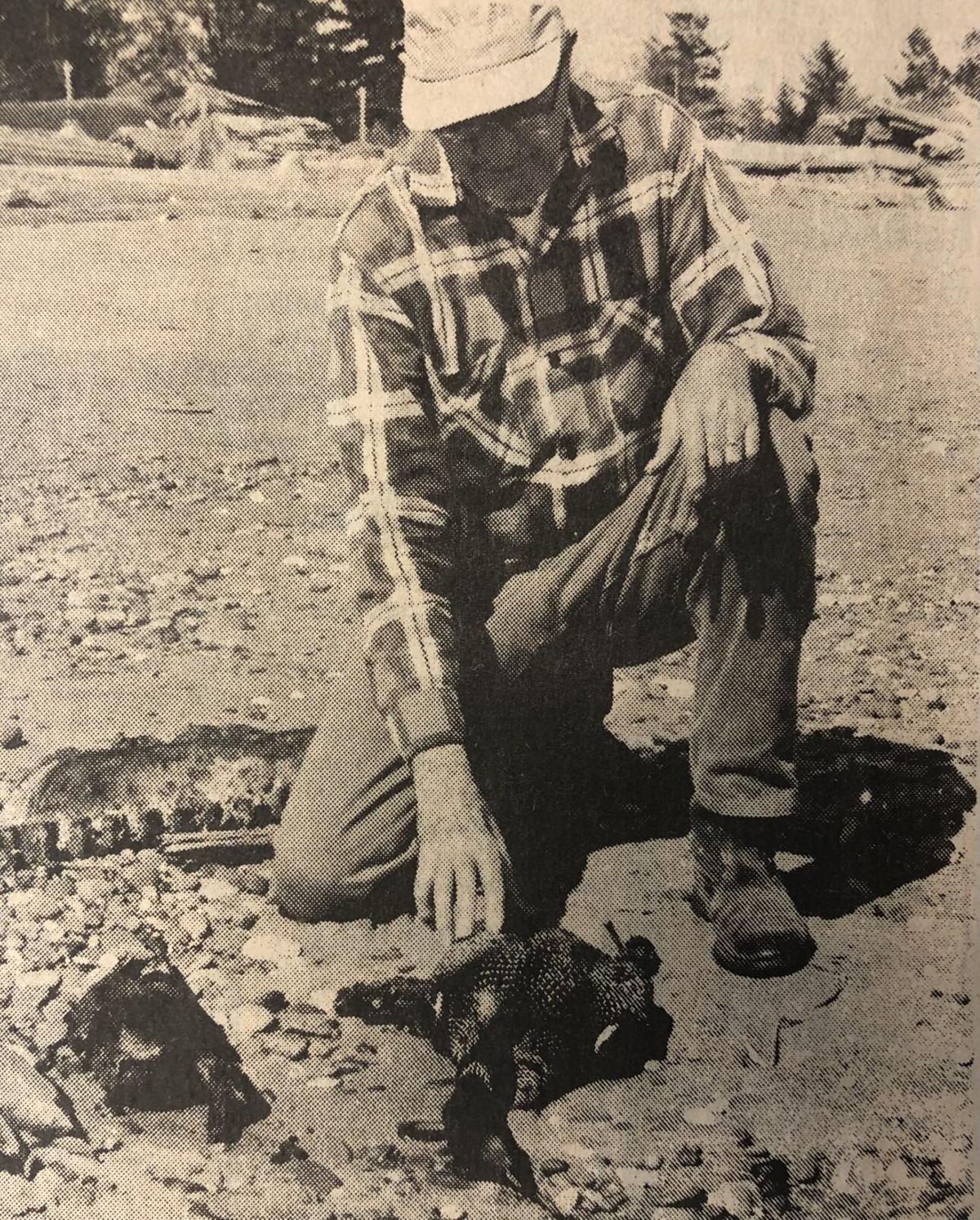 Supt. M. H. Gilliam arrived in the city from the state quarry at Deception Pass Sunday morning on the government launch Bonita, for the purpose of taking back twenty prisoners who arrived on the morning train in charge of Traveling Guardsman Rogers and Camp Guard W. J. Lynch. The prisoners were from the state prison at Monroe, and everything went “fine and dandy” until the party reached Everett, where they had to wait an hour for the northbound train. While thus employed one of the prisoners slipped off the handcuffs and rushed into the adjoining room from where he jumped out of a window, taking the sash along, as Mark Twain said, “Not because it was needed, but for convenience sake,” making good his escape, as he has not been heard from since.

A little trickle at first, a runlet, a brook, a roaring torrent, and then a wall of water rolled down from Cranberry lake to the Sound when a portion of the dam gave away and a million tons of water–160,000,000 gallons–swept down the half-mile from the dam to tidewater, carrying dirt, gravel, boulders and logs with it, cutting great gashes in the hillside, destroying roads and burying the railway tracks and foreshore beneath thousands of tons of debris.

…Damage was huge, that could be seen at a glance, but it cannot yet be estimated. That will be work for experts. Several inches of dirt and mud covered the main floor of the codfish factory of the Robinson Fisheries, three feet of mud and water filled the the basement of the Marani fertilizer plant, five hundred yards of the Great Northern track was under rock, mud and gravel to a depth ranging from a few inches to a few feet and in places it was undermined and twisted badly, the loading platform of the fisheries had disappeared beneath the avalanche, and buildings that had stood high on pilings twelve feet above the water, appeared to be standing on dry land, the slide having filled the bay beneath them.

…Cause of the disaster – for disaster it is – is attributed to muskrats by Engineer Short, manager of the water system.

Anacortes can now really boast of possessing all the modern conveniences of a larger city. Gas has come and with it comes the end of many of the housewife’s drudgeries and the dawning of an era of freedom from kitchen and household slavery. We of this community can be justly proud that gas service is being supplied to us by Natural Gas Corporation of Washington as no other enterprises could so manifestly prove that this is a growing and stable community.

Final plans are being made this week for the fifth annual Skagit Valley Tulip show to be held in the La Conner high school gymnasium this Saturday and Sunday, April 28 and 29.

…A lifesize windmill will center the floor, surrounded by gardens and paths. A real waterfall has also been arranged by Wells.

Army National Guard training facilities in Anacortes marched one step nearer as the Senate Armed Services committee included $150,000 for the project as one of seven in the state. Approved for Navy facilities near Bellingham was $1.7 million and for Everett’s Paine Field, a sum of $608,000.

The spill, which came from United Transportation Co. barge that loaded at the Texaco Refinery pier on the north end of March’s Point, was not very noticeable on the Fidalgo Island north shore, but caused much dismay to south shore residents of Guemes Island.

Bruce Larson of Mount Vernon, injured Friday morning at the Anacortes Shell Refinery, was released from Harborview Medical Center in Seattle on Monday. Larson was treated for systemic poisoning after being splashed by a liquid containing hydrogen sulphide and ammonia during routine operation at the refinery.