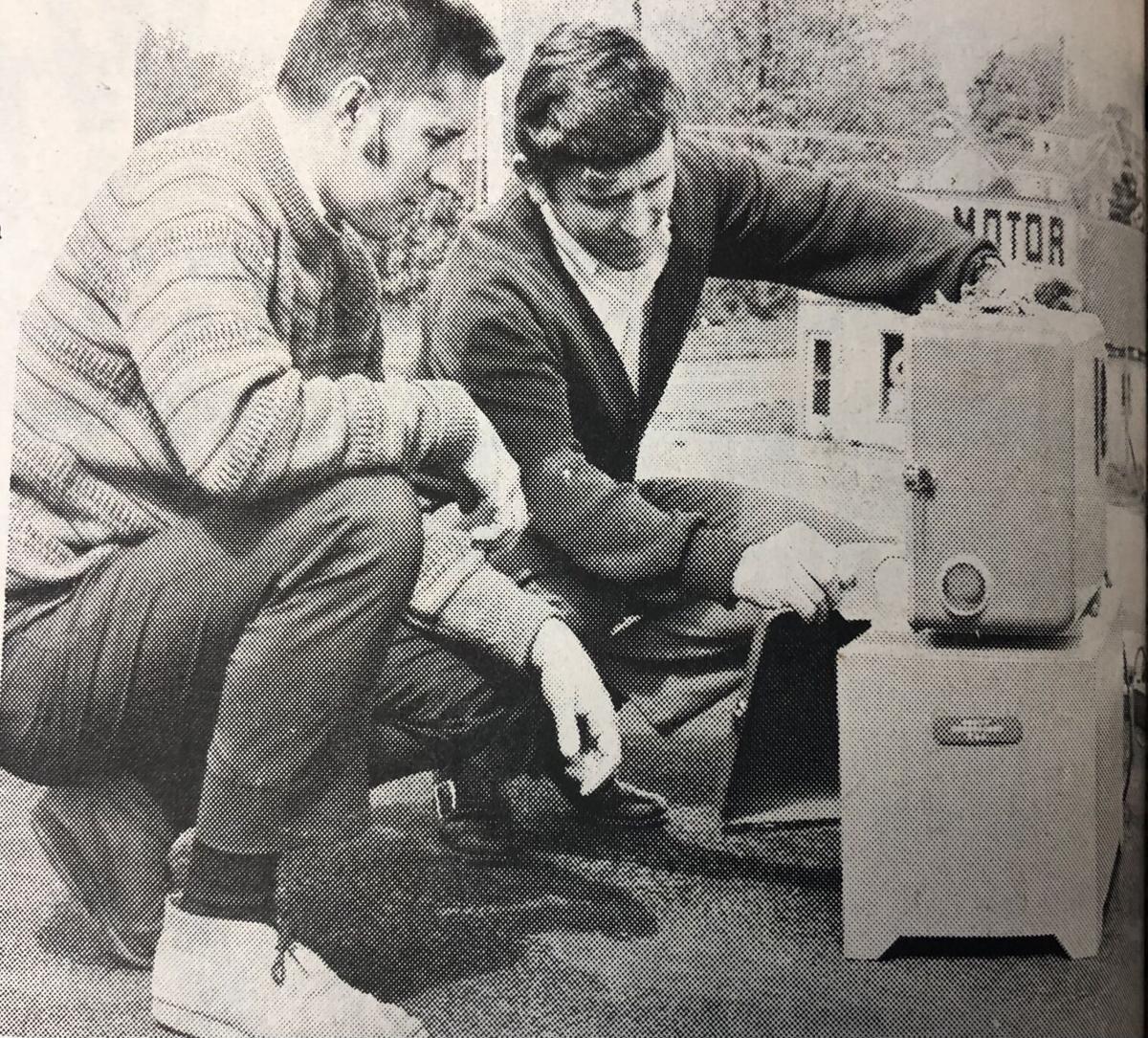 May 13, 1971: AIR CHECKERS– Every week Charles R. Erwin (right), a nuclear technician for the Northwest Nuclear Power Associates visits Anacortes to pull a sample from the air monitoring machine based on top of the Anacortes Fire Hall. Joining Erwin on a recent check was Robert R. Mooney, representing the Washington State Department of Social and Health Services. 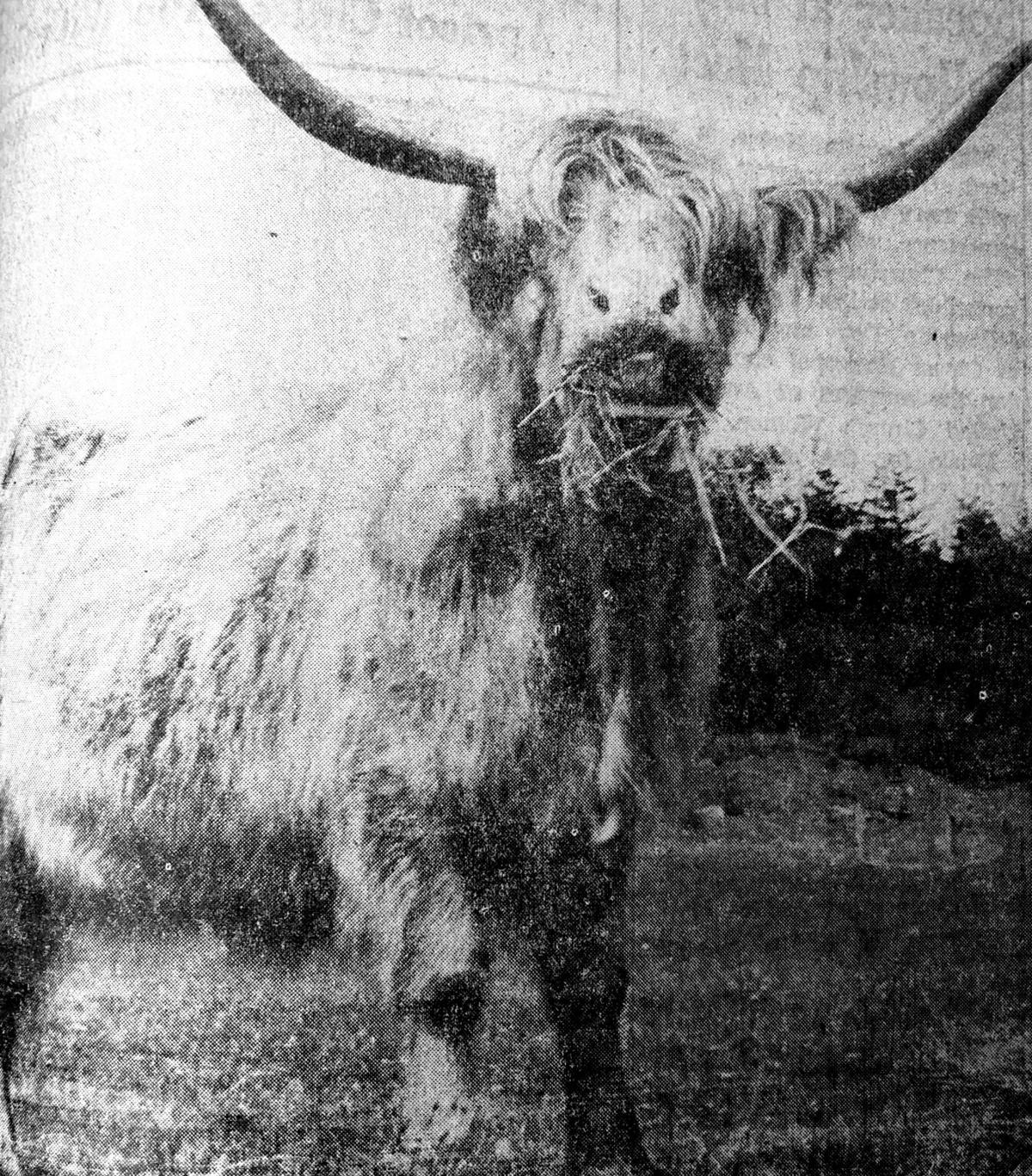 Buy Now
May 11, 1961: GENTLE–In spite of appearance, this Scotch Highland cow is not about to charge. The animals generally are even-dispositioned and permit humans to wander about them at will although they are wary and protective when they are followed by their calves. Spreading horns give a wild look to the animal which is misleading, according to owner Vic Pearson.

Harbor Master C. A. Norton is this week supervising the driving of piles of the new city dock, to be built at the foot of Q avenue, which, when completed, will be free to outside boats, but open to rental at the rate of $2.00 per month to home people who wish to have a place reserved for their own use. This rental will go towards the upkeep of the dock.

In just a week or two “Anacortes Free Auto Park” will greet the incoming tourist at the corner of Thirty-second street and Commercial avenue, a big ornamental sign calling attention to the camping spot. And when the tourist enters the park he will find in the center a cleared spot big enough to hold a hundred autos, camping spots beneath the trees for conveniently located, four big brick, iron-covered ovens, an tables built beneath a big roof on which campers may spread their meals.

With the recent turning on of gas in this community very favorable rates covering this service have been placed on file by the Natural Gas Corporation of Washington with the State Department of Public Works. These rates apply not only to this city but to the other communities recently given gas service, including Anacortes, Shelton, Camas and Port Townsend.

Two of the outstanding events of the 1941 Marineers’ Pageant celebration which will be held here on July 24, 25, 26, 27 are well along in the planning stages according to announcements made this week by committee chairmen.

The two events which are looming up spectacularly at this early planning stage are the parades, four of them, the children’s parade, good parade, illuminated parade and the grand parade.

The other outstanding event well along in planning is the huge water show.

Two young boys, believed to be responsible for a string of burglaries and car thefts through the county this week, were still at large today after a two-day, day and night combing of wooded areas around Anacortes. The elusive juveniles were last reported seen near the Anacortes Veneer plant last night. Early in the day a Filter Plant employee, W. O. Rogers, told police he had seen them in the woods near the plant.

For William E. Robinson, 4509 Oakes Avenue, the matter is solved.

But for scores of other Anacortesans who learned of Robinson’s action after finding $3,430 earlier this week, the question is still being debated.

Would they or would they not, under the circumstances, have reported the money found by Robinson while cleaning a one-room dwelling which he had recently purchased in the area of the old Walton Mill site.

…Whether Robinson will be rewarded because of his honesty – and in view of his actions his integrity is above reproach – remains to be seen.

Anacortes Postmaster Lavern Deane said today that increases in most postage rates will take effect May 16 as the new United States Postal Service begins its task of achieving self-sufficiency as required by the Postal Reorganization Act. Deane noted that general postage rates have not been increased since 1967 when Congress passed what was to become its final legislative act in this respect.

The Anacortes City Council gave the Anacortes Police Department its full support in the enforcement of “driving while under the influence of drugs or intoxicants” (DWI) laws Monday evening during their regular study session.

“The council fully supports the police in their efforts to aggressively pursue enforcement of DWIs,” council member Charlie Kiel told the audience.

Anacortes City Manger Bob Olander emphasized that the Anacortes Police Department has not, to his knowledge, had a policy of waiting outside drinking spots to purposely cite drinkers with DWI tickets after they drive away in their cars.

Despite what a few bar owners have said, “It has not been the policy and it will not be the policy” (of the police department), Olander said.