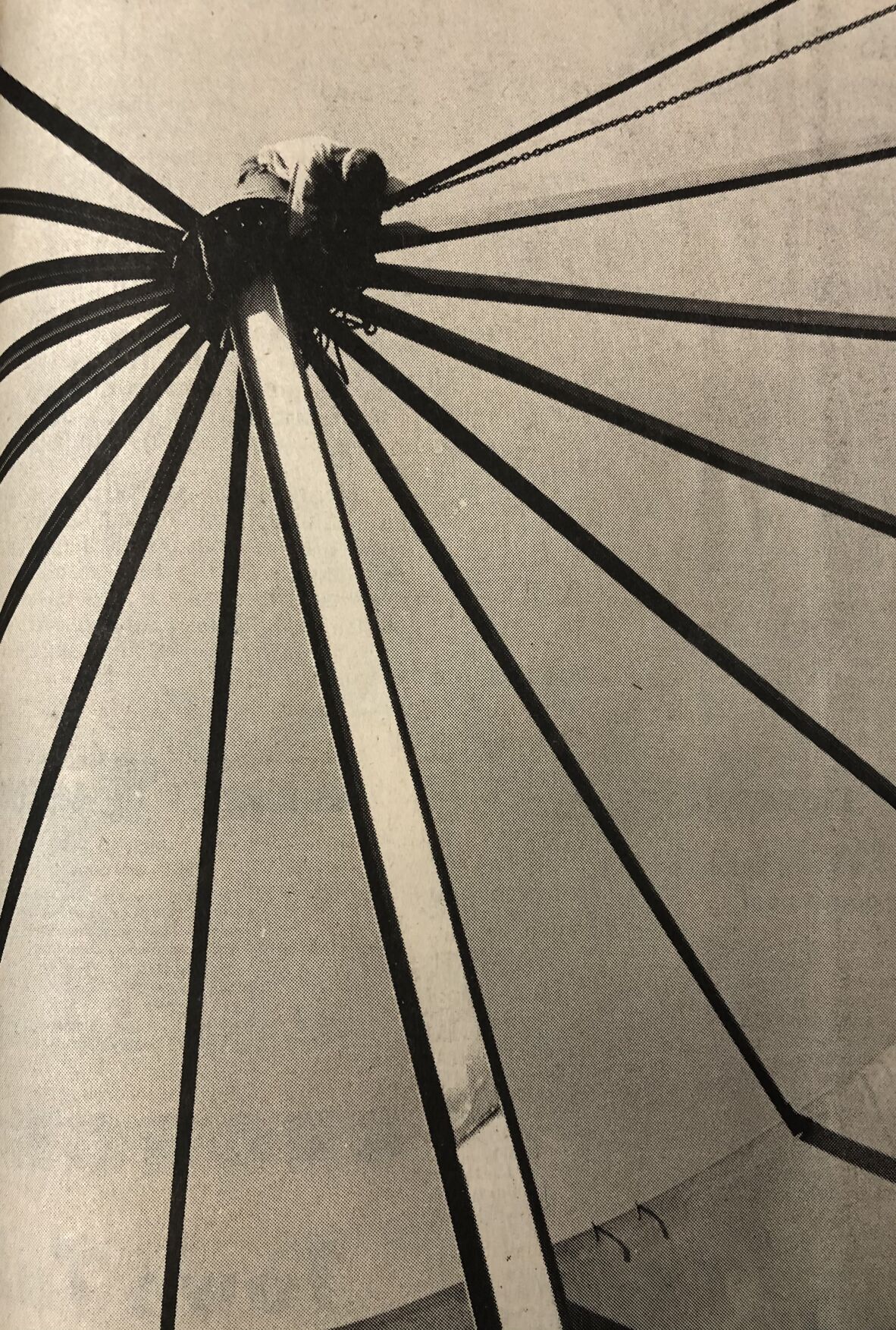 Sept. 2, 1971: ALL SPOKES LEAD TO THE ROOF – Gil Mounts, an employee of the Reliable Welding Works of Olympia, was out on a limb Friday while installing struts on the turpentine storage tank being constructed for the Port of Anacortes just north of Fourth Street. From the photo it looks like Mounts is spinning a spider web instead of preparing the tank for its roof. 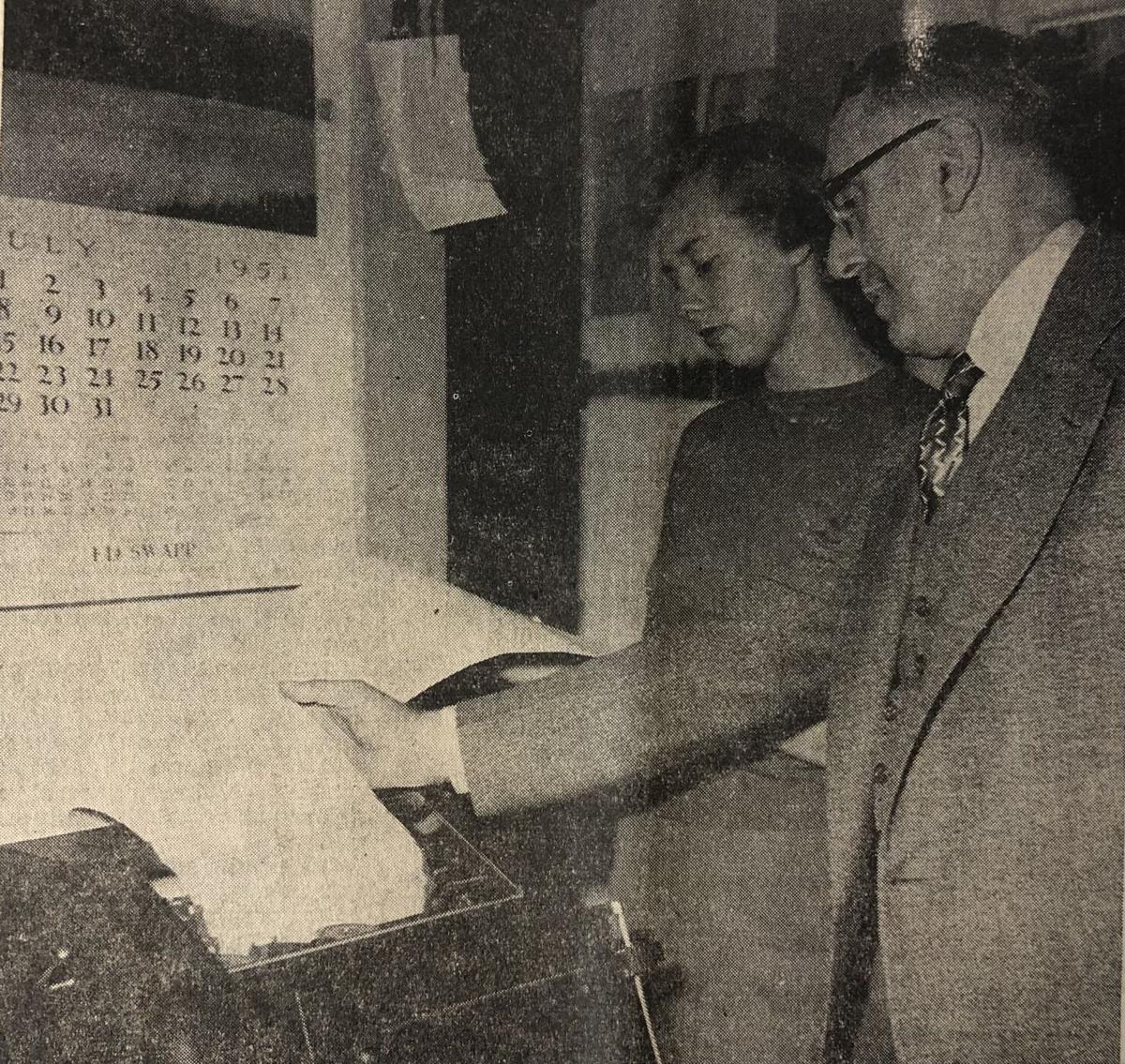 Sept. 2, 1971: ALL SPOKES LEAD TO THE ROOF – Gil Mounts, an employee of the Reliable Welding Works of Olympia, was out on a limb Friday while installing struts on the turpentine storage tank being constructed for the Port of Anacortes just north of Fourth Street. From the photo it looks like Mounts is spinning a spider web instead of preparing the tank for its roof.

What is, by and large, the best proposition ever made to the city of Anacortes in connection with any public improvement, was tentatively laid before an informal meeting of the city council by representatives of the Great Northern railroad for the filling in of Commercial avenue from Eleventh to Fifteenth street; Fifteenth street from O to Q; Q from Fifteenth to Seventeenth, Seventeenth from Q to R and R from Seventh to Twenty-first street.

This was a figure of $21,000 for the entire improvement, while the city engineer’s estimate was $17,736 for the Commercial avenue improvement alone.

Deeds are being made out this week to some sixteen lots in the new summer home community on the North Beach of Guemes, where the promoters secured a considerable tract from Wm. Alverson and have divided it into lots 50x400 feet, running from the beach up to the road. The location is the northwest corner of the Alverson place, and about a half mile from the Alverson home.

A fifteen per cent cut in the wages of all city appointive employees is the largest slash taken by Mayor E. E. Van Buren in the tentative city budget for next year, that was officially turned over to him at the council meeting Tuesday night.

Minor reductions here and there, in addition to the salary cut, including the elimination of a typewriter for the city clerk, and a new truck for the street department, have cut the budget down to approximately $150,000, figures show, and provides for a tax levy of 27.14 mills.

The war in Europe struck home to Skagit county recently with the announcement received here that U.S. Naval Ensign David Allen Eldred, 25 of Burlington, Washington, who was serving as an observer with the British Air army had been killed in action recently.

Eldred was reported to have been aboard an English flying boat that crashed somewhere off the English coast.

Billy McCall was back in Anacortes this week looking for old landmarks and friends he had known when he first came here in 1888. The elderly pioneer was just returning from a walk out toward Shannon Point when Monday’s rainstorm hit.

“I stopped in a the public library to get out of the rain and ask about some of my old friends,” he said, “but I guess there aren’t many left.”

It’s the end of an era in Puget Sound shipping.

The last of the wooden stern-wheelers to ply the Skagit river, now attracting sight-seers along the Anacortes waterfront, is bound for Seattle and a sedentary career. The Skagit Belle, sold yesterday to a newly-formed Seattle corporation, will finish her days as a pierside floating restaurant and import shop, according to plans outlined by Keith M. Abbot, one of the buyers.

Built in 1941 for the Skagit River Navigation Co., the Skagit Belle was commandeered by the Army during World War II. After military duty that included service on the Yukon River she returned to Puget Sound, and carried freight between Mount Vernon and Seattle until 1960.

The steam-powered boat paddleboat, 206 in overall length, required a crew of ten for full operation.

The Scott Paper Company was joined by the Washington State Department of Ecology Monday in opposing new regulations to govern dumping of waste sulfite liquor into the Guemes Channel from the firm’s Anacortes pulp mill during a hearing conducted by the State Pollution Control Board in Olympia.

Scott and the Ecology Department contend primary treatment and channeling of waste sulfite liquor through Guemes Channel would adequately disperse the effluents.

Citizens for Clean Water, a group with oyster interests, contends that sulfite liquor dumped into Guemes Channel by Scott at Anacortes has ruined the oyster industry in Fidalgo and Padilla Bays.

A private donation of 64 acres for the Padilla Bay National Estuarine Sanctuary recently was accepted by the federal National Oceanic and Atmospheric Administration as part of Washington State’s share toward acquiring the sanctuary.

The state Department of Ecology, which administers NOAA’s Coastal Zone Management Program in this state, said the property donated by Edna Breazeale, Bayview, was valued at $345,000.

The Padilla Bay National Estuarine Sanctuary near Anacortes was established on Aug. 29, 1980.