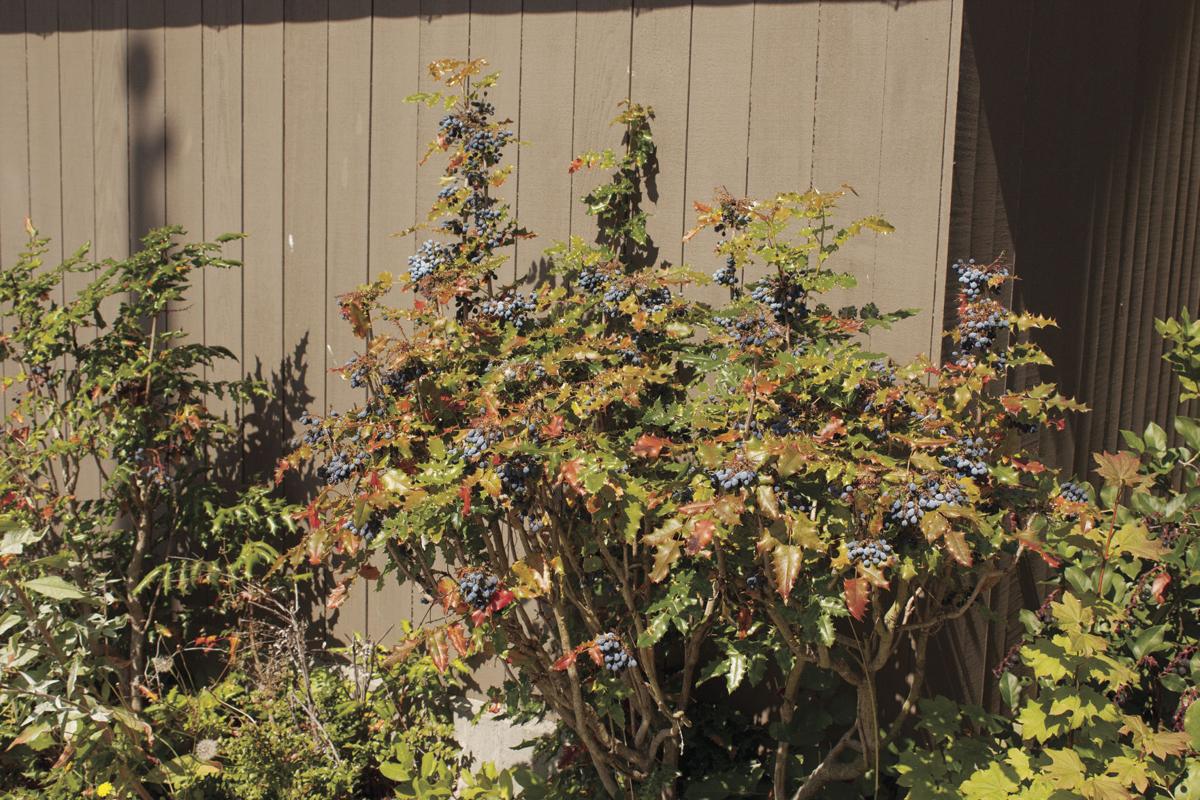 The foundation planting around the Padilla Bay Interpretive Center near Bayview is an example of native plants creating a variety of textures against a building. Shown here are natives mahonia, salal and vine maple. 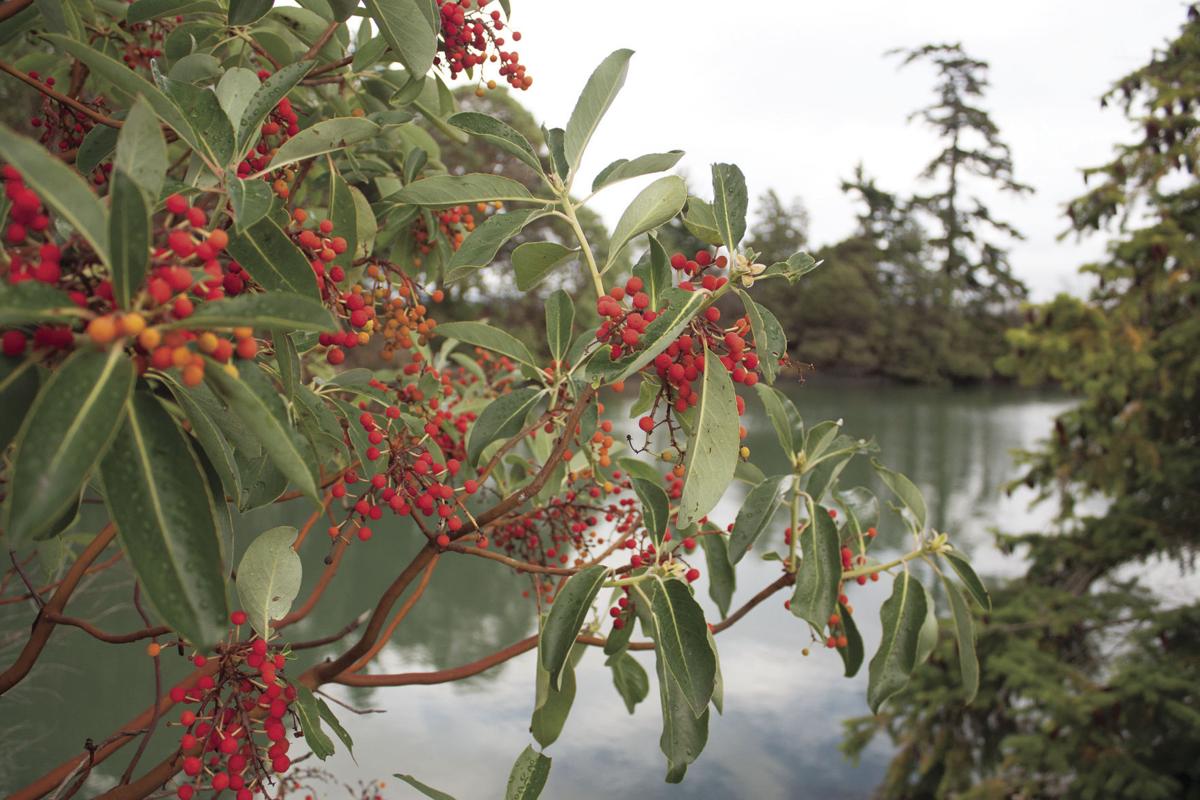 The Pacific madrone (Arbutus menziesii) is a broadleaf evergreen tree known for its attractive smooth, peeling red bark and shiny leaves. Its flowers form in white, drooping clusters, and its berries form in masses of red berries. 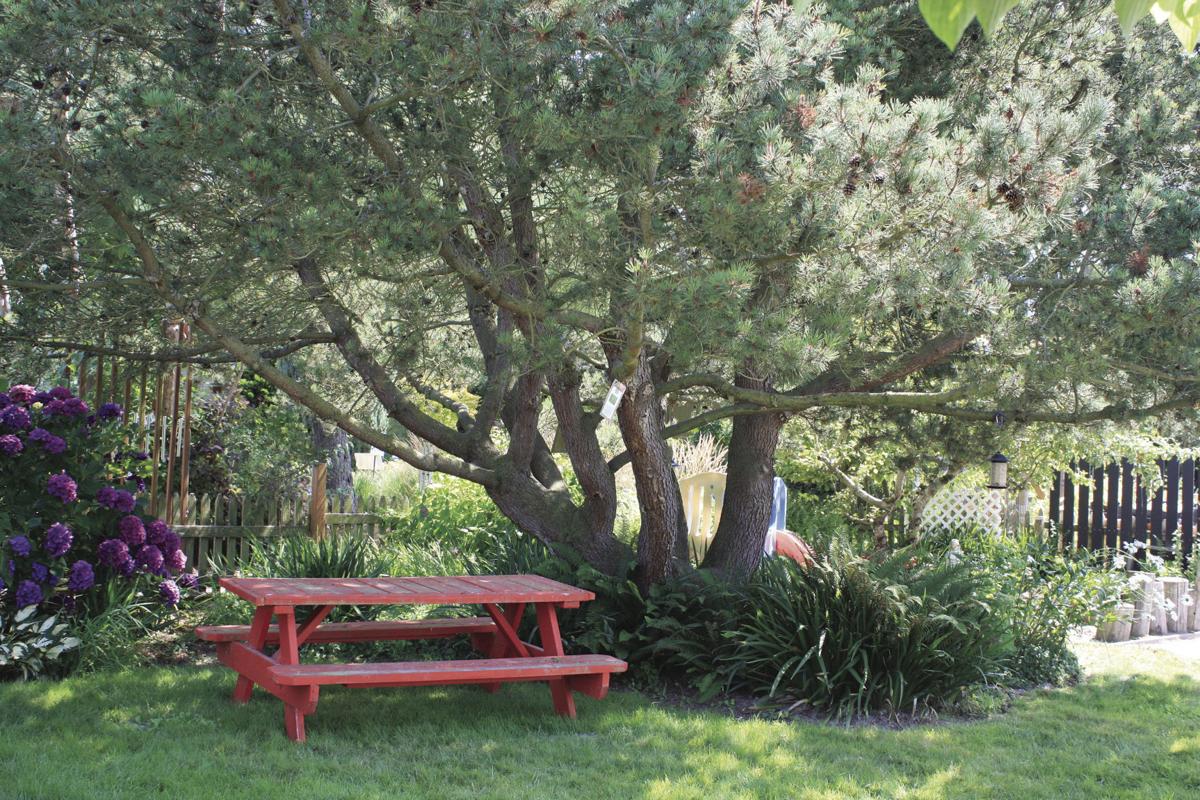 In the Discovery Garden, the Skagit County Master Gardeners’ display garden, a children’s play area features a multitrunked shore pine (Pinus contorta var. contorta) with a broad, rounded dome for shade. The shore pine is a Washington native from the coastal regions. 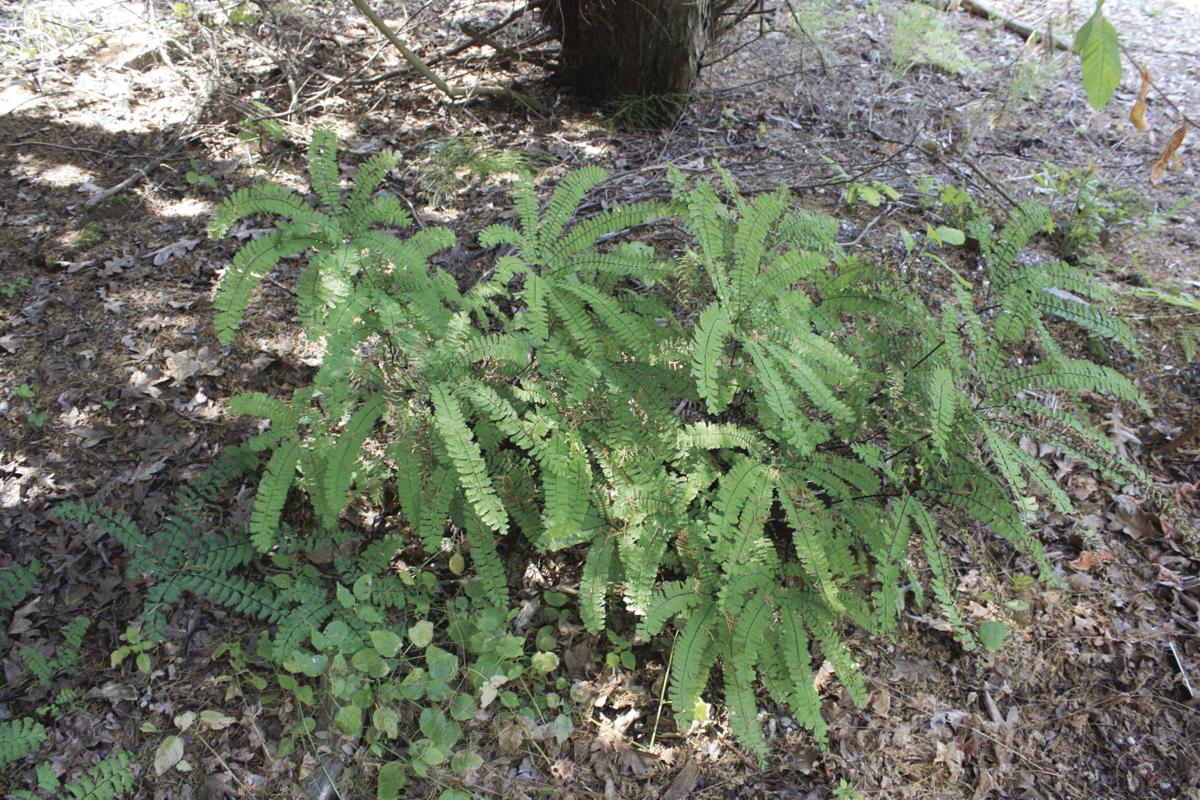 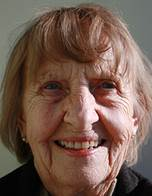 The foundation planting around the Padilla Bay Interpretive Center near Bayview is an example of native plants creating a variety of textures against a building. Shown here are natives mahonia, salal and vine maple.

The Pacific madrone (Arbutus menziesii) is a broadleaf evergreen tree known for its attractive smooth, peeling red bark and shiny leaves. Its flowers form in white, drooping clusters, and its berries form in masses of red berries.

In the Discovery Garden, the Skagit County Master Gardeners’ display garden, a children’s play area features a multitrunked shore pine (Pinus contorta var. contorta) with a broad, rounded dome for shade. The shore pine is a Washington native from the coastal regions.

Landscaping is the addition of plants to a property to improve its attractiveness and reduce its maintenance.

Using native plants can achieve both these goals and bring a bit of wilderness for the owner to enjoy up close, whether natives are used exclusively or mixed with existing non-natives.

A native plant is one that grows wild in a local region. Our local region is called the “Puget Trough,” which lies between the Cascade Mountains and the Olympic Mountains and includes Mount Vernon and Burlington.

Before European settlers arrived, coniferous forests dominated the region, and even today, tall Douglas firs dot the urbanized landscape. For the purposes of this article, however, all native plants in Washington will be considered native.

The key to success in choosing native plants for landscaping is matching the plants to the site — the closer the match, the easier the maintenance. Our climate has wet, mild winters and moderately warm, dry summers.

The landscaper should note the property’s sunny and shaded areas, its streams or ponds, rock outcrops, and changes in topography.

Our soil is typically acid. A professional soil test can measure its acidity and identify nutrients needed. Our region is also amenable to many Washington native plants from the alpine and coastal regions, which greatly expands the choice of natives for the landscaper.

Fortunate are those who already have a woodland, big or small. A native woodland will likely have one or more of the “big three” evergreen trees native to our area: Douglas fir (Pseudotsuga menziesii), western hemlock (Tsuga heterophylla), and western red cedar (Thuja plicata). The big trees form the canopy, create shade, supply mulch, conserve moisture and indicate an acid soil.

Numerous native shrubs that grow in deep shade can be added to the mid-layer — the eye-level layer in the woodland. Many of these are native to the Puget Trough and may already be growing on the site.

Among these are evergreen huckleberry (Vaccinium ovatum), which has shiny dark-green leathery leaves, pink bell-shaped flowers and edible dark-blue berries.

Also native to our region is the vine maple (Acer circinatum) that in the open is a small tree but in the deep shade is a broadly spreading shrub with bright green new foliage that turns red in the fall.

The ground-level layer of the woodland, the herbaceous perennial layer (nonwoody flowering plants), provides texture, often carpeting the floor with drifts of green.

Bunchberry (Cornus Canadensis) is at home in the woodland with its broad leaves forming a circle supporting a set of white bracts surrounding a cushion of flowers. Another carpeting plant, wild ginger (Asarum caudatum), forms a mat of shiny dark-green leaves.

Nothing, however, can beat the contribution that native ferns make to the texture of the woodland. The common sword fern (Polystichum munitum) often dominates a woodland floor, but two other ferns of note, the deer fern (Blechnum spicant) and maidenhair fern (Adiantum aleuticum), add delicate traceries to the woodland floor.

The edge, or verge, of a woodland will have both sun and shade and is perfect for a great number of Washington natives’ shrubs and herbaceous perennials. One of these shrubs is both a beauty and a tyrant — salal (Gaultheria shallon).

Bright green leaves cover the shrub from top to bottom and pink flowers adorn its branches. It is best used as a mass planting. If allowed to spread where it is unwanted, it aggressively overtakes other plants in its way, so beware.

Other shrubs that do well at the edge of a woodland and have attractive flowers are the Pacific rhododendron (Rhododendron macrophyllum) with rose-purple flowers and red-flowering currant (Ribes sanguinium) with dark pink flowers.

Full sun in an open area requires native plant choices different from the choices for the woodland. Some are native to our area in the Puget Trough, but others are native to Washington coastal and alpine regions.

One landscaping feature for full sun is a rock garden, where plants chosen should prefer dry, well-draining soil. An example of a low-growing native is the broad-leaved stonecrop (Sedum spathuliforium).

An example from the alpine world that will grow in a sunny rock garden is the spreading phlox (Phlox diffusa), which spreads its pink flowers among the rocks. Our local native kinnikinnick (Arctostaphylos uva-ursi) is another low-growing spreader that will thrive in the rock garden.

A sunny site can also feature a mixed border with perennial natives such as the perennials tiger lily (Lilium columbianum) and red columbine (Aquilegia formosa).

Note: Native plants should not be dug in the wild. One local source is the Washington Native Plant Society, which holds occasional sales in Skagit County.

— Sonja Nelson is a Washington State University/Skagit County Master Gardener. Questions may be submitted to the WSU Extension Office, 11768 Westar Lane, Suite A, Burlington, WA 98233. 360-428-4270 or skagit.wsu.edu/MG. Consider becoming a master gardener. If you are interested, please contact the previous website.