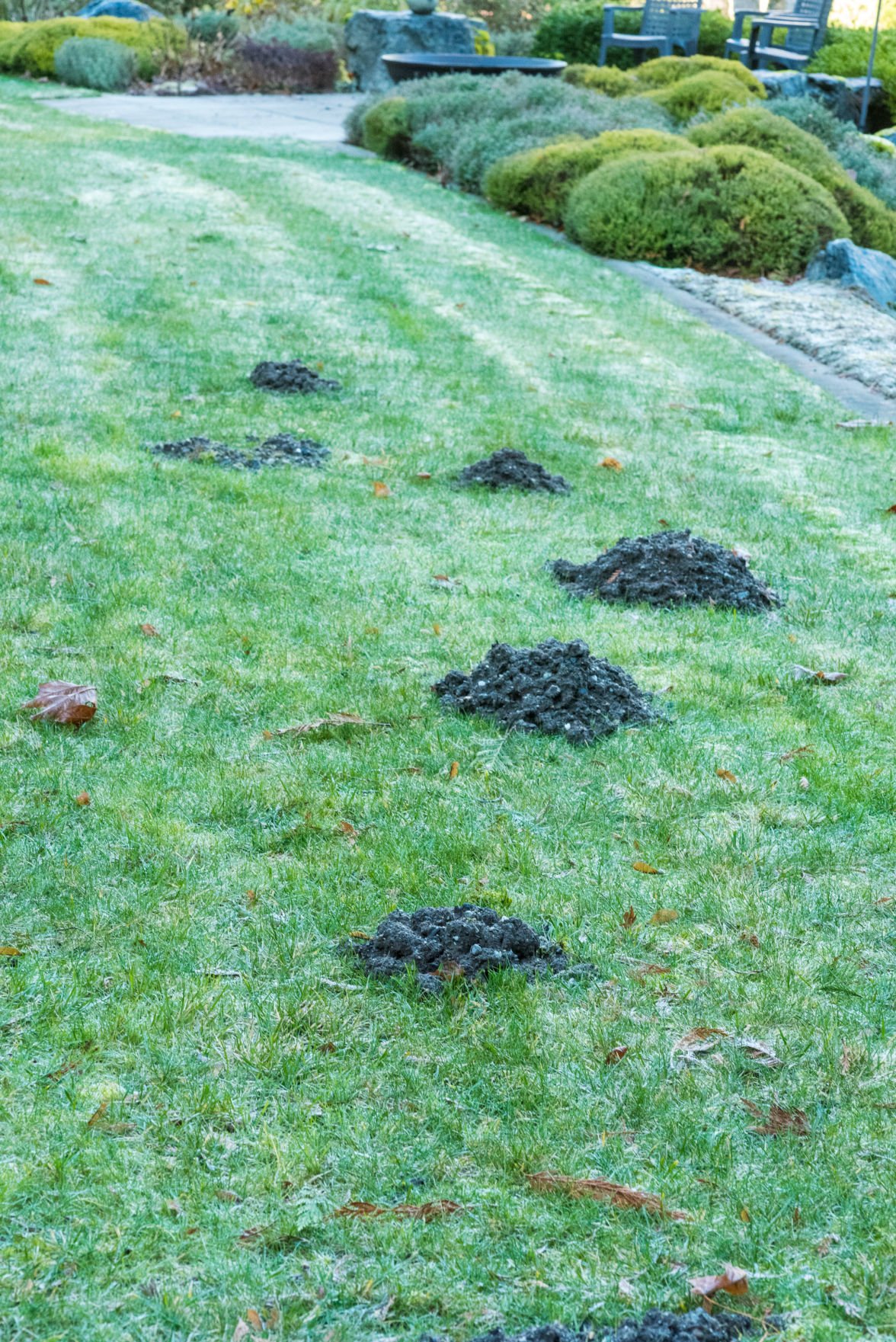 Mole management can be tricky. Mole traps that use body-gripping or piercing mechanisms are not legal in Washington state since voters passed Initiative 713 in 2000. 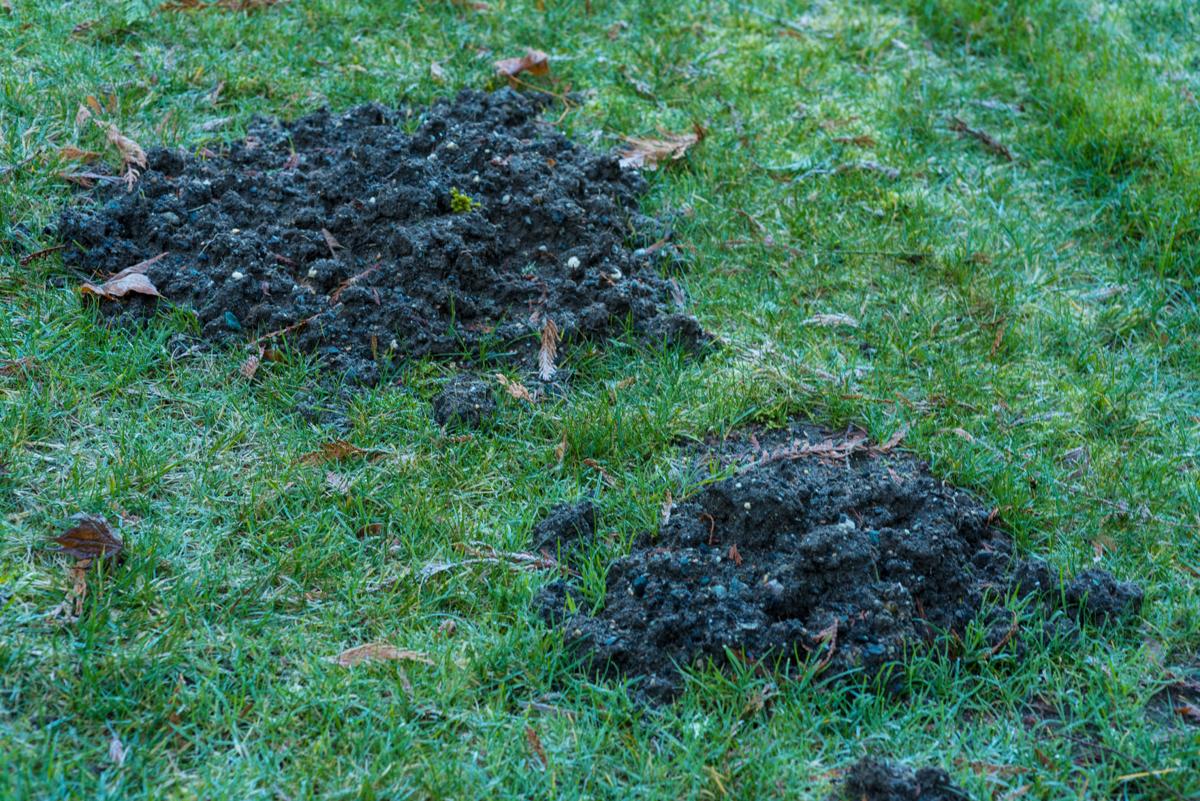 A sure sign of moles in your yard are fresh clumps of dirt. 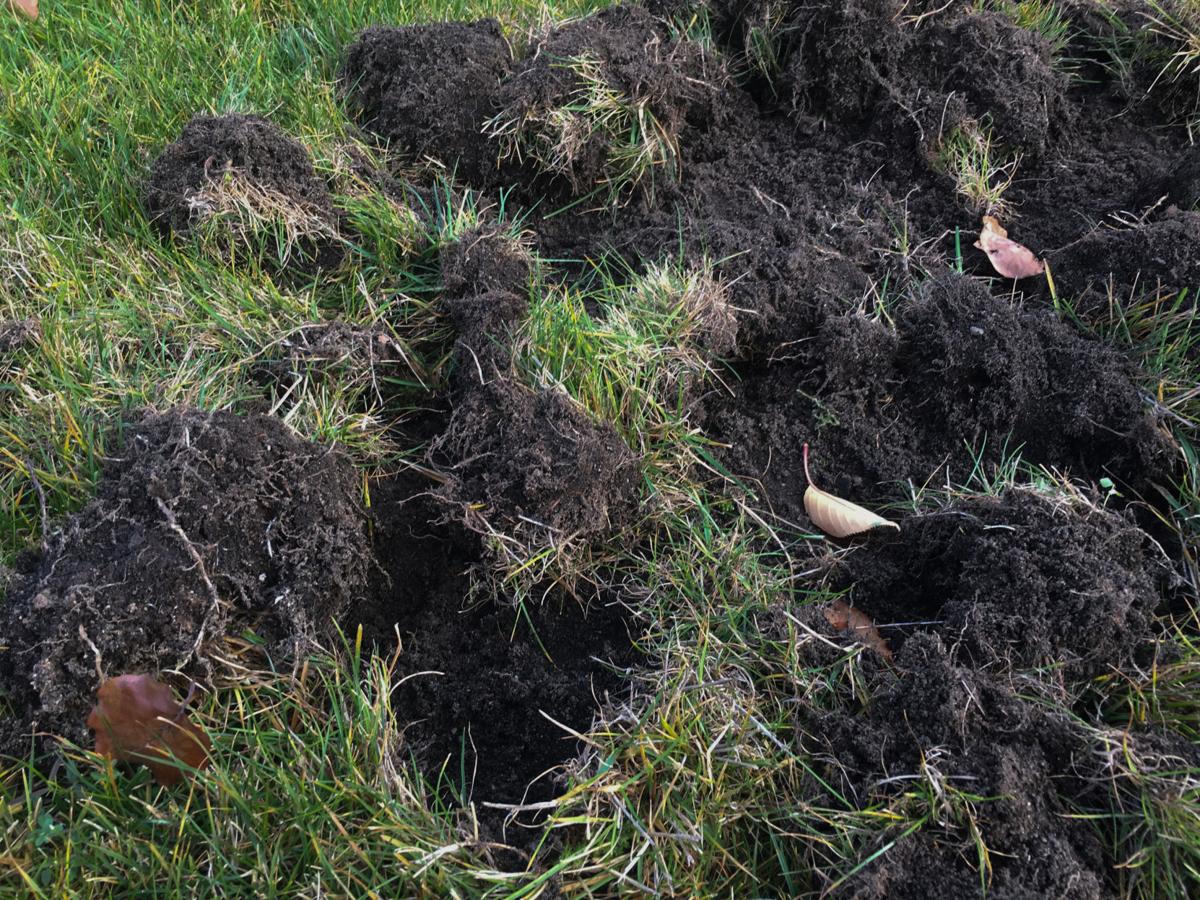 Raccoons digging for grubs can destroy a lawn. In this case, the home owners decided against any action that would harm the raccoons and opted instead to wait them out. 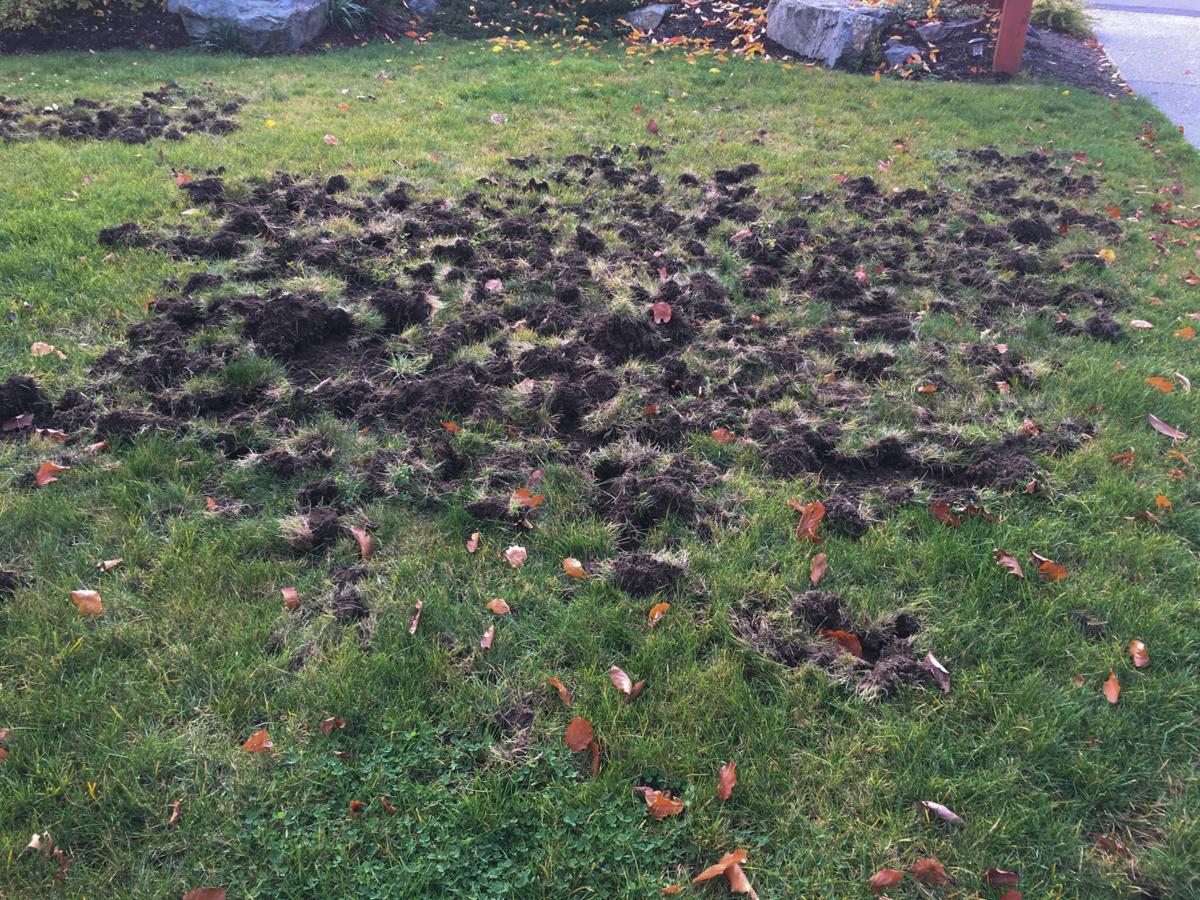 The homeowners initially thought this damage was done by vandals. It turned out to be raccoons.

Mole management can be tricky. Mole traps that use body-gripping or piercing mechanisms are not legal in Washington state since voters passed Initiative 713 in 2000.

A sure sign of moles in your yard are fresh clumps of dirt.

Raccoons digging for grubs can destroy a lawn. In this case, the home owners decided against any action that would harm the raccoons and opted instead to wait them out.

The homeowners initially thought this damage was done by vandals. It turned out to be raccoons.

As the gardening year is set to begin, gardeners start to patrol their property, checking on winter damage, the condition of the soil and overwintered plantings.

Evidence of holes can often be found in lawns, along pathways, under rocks and shrubs, and in raised beds. While many humans have been inside during the darkest months, other mammals have been hard at work burrowing, digging and tunneling as the ground softens.

But do you know just what critter is doing damage where? Sometimes the holes can give you a clue and help determine how to deal with who you have.

Most will recognize the mini-volcano mounds with hole openings as small as a couple of inches popping up in the lawn, along sidewalks or in other noncompacted areas. These are made by the Townsend’s mole or the Pacific mole.

The solitary and territorial mammals, rarely seen above ground, can live up to three years in the wild. They feed mostly on invertebrates, but their tunneling and dirt displacement can smother small landscape plants, unearth plant roots that then dry out, and can pose a walking hazard.

While Townsend’s moles will sometimes feed on bulbs and sprouts, this damage is usually caused by voles that often use mole tunnels.

Mole management can be tricky. Traps that use body-gripping or piercing mechanisms are not legal in Washington state since voters passed Initiative 713 in 2000.

Mole barriers can be difficult in large areas; chemical methods can be dangerous to pets, children and other wildlife; concussive devices are not very effective on western species; and sonic devices have proven to be ineffective.

Flushing or stomping techniques can be used to expose the mole where it can be dispatched with a shovel — not every gardener’s favorite task.

Rake out the mounds (stomping will only cause the mole to push the soil back out), remove excess soil and sprinkle on grass seed. After all, moles are helping control pests such as crane fly larvae, cutworms and slugs as well as doing aeration for us.

Another common yard troublemaker in Western Washington is the Townsend’s vole. Although not a mouse, voles are sometimes called “meadow mice” based on their close resemblance.

Voles feed on succulent grasses, ornamental plants, garden vegetables, roots and bulbs as well as bark and roots of woody plants if other food sources are scarce. Look for 1/16”-wide tooth scars that appear in a crisscross pattern on damaged woody plants or herbaceous plants cropped just above the soil surface for evidence of their presence.

You may find ¾- to 2-inch open tunnels or 1- to 2-inch wide trails running through grasses as well. Their populations can explode to hundreds of voles per acre, so if you have seen one, you can bet you have a lot more.

There are no home-use rodenticides registered for voles. Solid barriers, fences or cylinders of quarter-inch hardware cloth installed around gardens or individual plants can reduce root damage if your vole population is not extreme, but tunneling species can still sometimes reach vulnerable plants.

Common snap traps baited with peanut butter or apple pieces can be legally used to capture voles. Place the trap at right angles to the runways and tunnels to manage small populations.

Cover the traps to prevent harming birds and check them daily. Wear gloves or use a plastic bag on your hand when handling any dead animal. Tie the animal-filled bag shut and place in the trash.

Another Western Washington common pest is the rat. The Norway rat is also known as the brown rat, sewer rat or wharf rat.

They live in burrows often along building foundation walls, under slabs, in overgrown weedy areas, beneath debris and in moist areas in and around gardens and fields.

Active burrow entries are 2 to 4 inches in diameter, free of dirt, and surrounded with smooth, hard-packed soil.

The black rat is also known as a roof rat. They are less likely to tunnel and often found in buildings or roofs. Both average 16 inches in length, which includes its long, scaly tail.

Our “Ask the Master Gardener” column dealt with rats in a two-part series last year entitled “Rats and Their Behavior” on March 23, 2018, and “Rat Control” on April 6, 2018. Visit the Skagit County Master Gardener website at extension.wsu.edu/skagit/mg/ for these articles to understand more fully about these creatures and how to manage them.

Other yard destruction may come from skunks, raccoons or squirrels in their quest for food. Skunks are nocturnal feeders, so the soil disruption may appear overnight.

A skunk presses its nose to the soil and digs with its long, front claws to harvest the grub below. The hole left is cone-shaped: wide at the opening and pointed at the bottom. Skunks will dig many single holes and you may detect a distinctive skunky smell in the area.

A raccoon, however, senses its underground meal, digs in its claws and uses its strong legs to provide leverage to peel back grass and churn up the soil to find as many morsels as possible. The squirrel generally causes much less damage when it buries foraged seed in its stash for the winter months.

{span}Kathy Wolfe{/span} is a Washington State University/Skagit County Master Gardener. Questions may be submitted to the WSU Extension Office, 11768 Westar Lane, Suite A, Burlington, WA 98233. 360-428-4270 or skagit.wsu.edu/MG. Consider becoming a master gardener; if you are interested, please contact the previous website.

n “Hummingbirds and How to Attract Them”: wdfw.wa.gov/living/hummingbirds

n “Butterflies and How to Attract Them”: wdfw.wa.gov/living/butterflies

n “Beneficial Insects, Spiders, and Other Mini-Creatures in Your Garden: Who They Are and How to Get Them to Stay”, Washington State University Extension, EM067E, at cru.cahe.wsu.edu/CEPublications/EM067E/EM067E.pdf