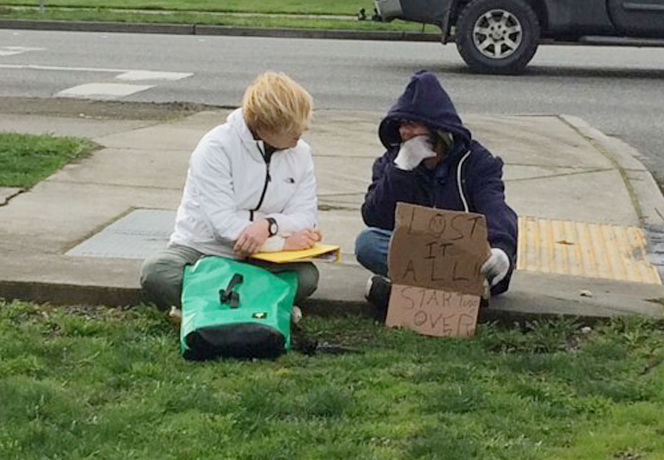 As Chief Chris Cammock said in a recent radio interview, “We’ve (Mount Vernon Police Department) had an embedded social worker in place for the last several years and it’s been transformational!”

I couldn’t agree more with the chief. Erin Von Fempe, our own embedded social worker, has made inroads with many in the community during the last three years. She has assisted with moving many people out of the criminal justice system.

I’d like to spotlight some of the things Von Fempe has done and ways the community can support her.

In March 2017, the Embedded Social Worker program was still in its infancy. There were a lot of new opportunities with Von Fempe’s role in the community and ways she could partner with law enforcement.

Von Fempe most often works with people who are without homes, and many of the people she comes into contact with are in need of resources. This may be the result of a recent job loss or may be related to a mental health illness or a substance use disorder.

Von Fempe will generally make contact with people out in the field and doesn’t require a uniformed police officer to be with her.

This frees up patrol officers to take care of urgent calls for service and matters of public safety. It provides the individual in need with a social work specialist to help navigate the complex and often confusing medical, mental health, treatment and housing systems.

She was involved in bringing an alliance of social workers in Washington state together as a networking group.

COVID-19 restrictions have prevented in-person access to counseling and treatment appointments, but Von Fempe obtained an iPad and partnered with the Reach Center so individuals could drop in and attend these appointments virtually.

She’s also connected to the newly established Community Court and is looking to start a Contingency Management program where rewards are given to those making positive strides within the community.

On a more personal level, one person she has helped was once a highly-paid, successful professional in a very competitive field when he suffered a stroke.

This event caused him to retire because he couldn’t perform his job duties safely. His wife divorced him and eventually he became homeless.

Von Fempe began slowly reaching out to him as he was initially very suspicious of anyone offering help. Eventually, he started working with her to complete housing applications and resolving his legal issues so that he could move forward with his housing plan.

With much support from various agencies and departments within the city of Mount Vernon, this man moved into his own apartment. He has lived there for over two years and has reconnected with his family and started participating in some community activities.

These are just some of the examples that demonstrate Von Fempe’s effectiveness, and I truly believe she is a difference maker in Mount Vernon.

At the Mount Vernon Police Department, we consistently look for innovative ways to “police” our community as it’s always in a state of perpetual change.

A prime example of this is the concept of hiring of a social worker to work with the police department. A conceptual idea that came about over four years ago and has now morphed into “just the way we do business.”

If you would like more information about the MVPD Outreach Program or are interested in supporting the program, please call MVPD at 360-336-6271.

— Brent Thompson is a sergeant in the Mount Vernon Police Department.