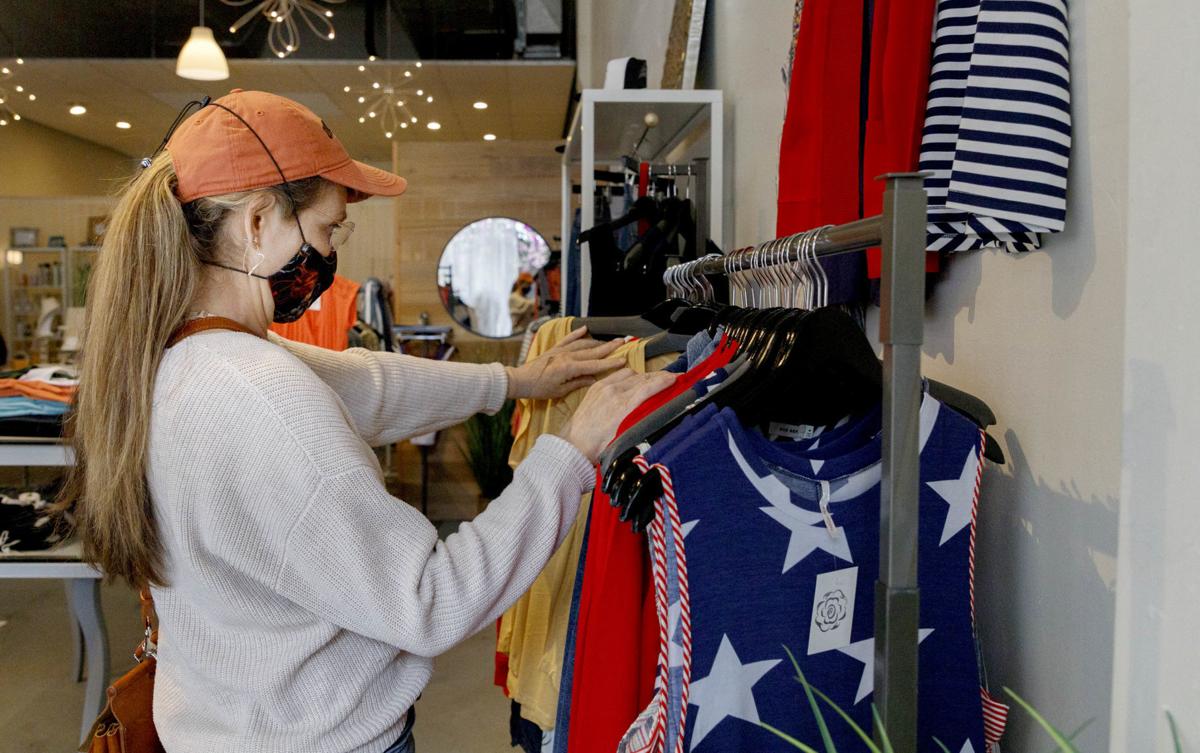 Lynn McKay, of Seattle, browses at House of Style in downtown Mount Vernon on Saturday afternoon while wearing a face covering. 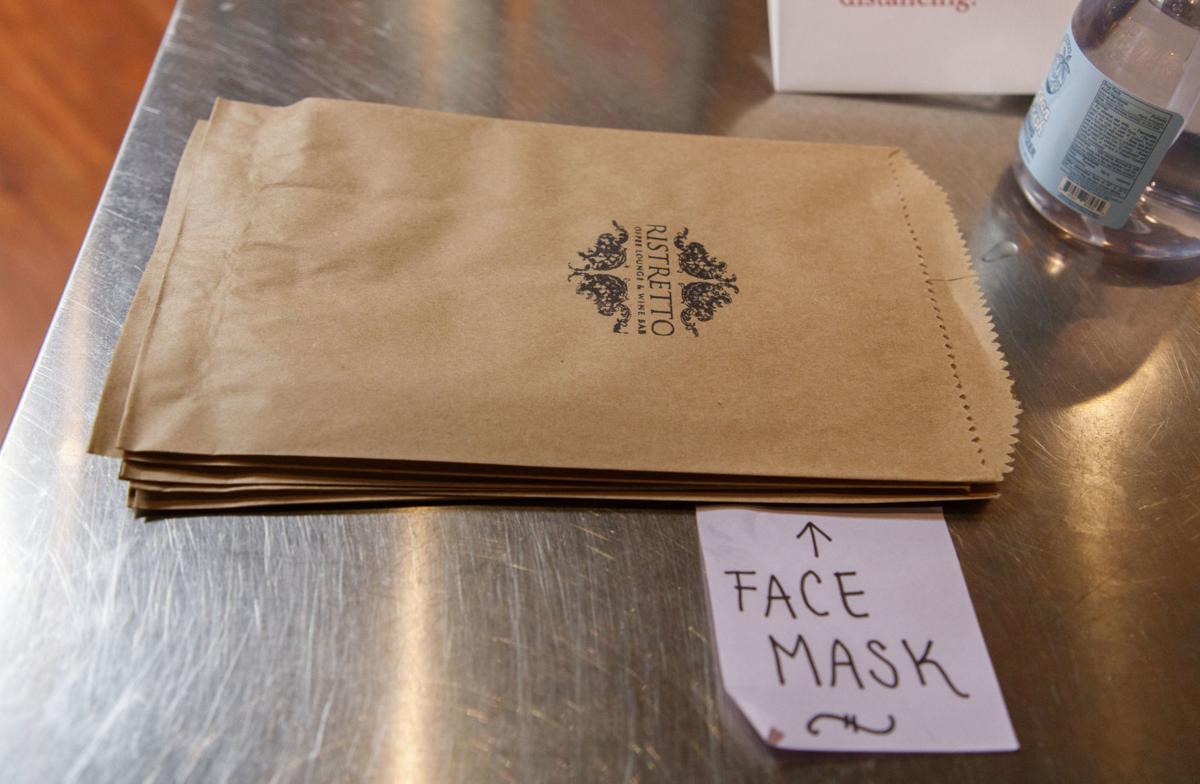 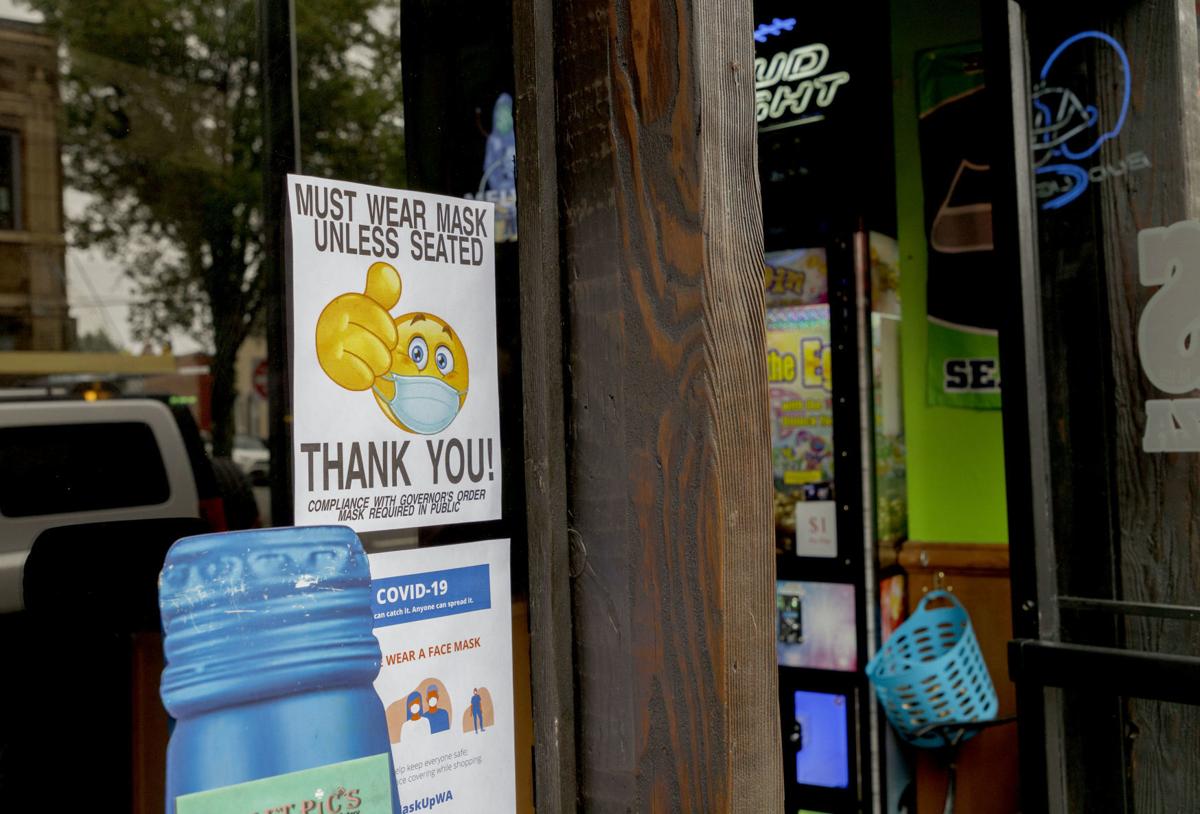 Lynn McKay, of Seattle, browses at House of Style in downtown Mount Vernon on Saturday afternoon while wearing a face covering.

On the second day Washingtonians were required to wear face coverings in public to reduce the spread of COVID-19, most in Skagit County appeared to be complying with the order.

At a busy Fred Meyer in Burlington on Saturday afternoon, a vast majority of shoppers donned face coverings. In downtown Mount Vernon, employees at businesses reported that most customers did the same.

The statewide order, which went into effect Friday, requires face coverings for those 5 and older in indoor spaces open to the public and in outdoor spaces where it is not possible to stay 6 feet apart from nonhousehold members. There are exemptions, such as when seated at a restaurant.

COVID-19 cases and hospitalizations are rising again in Skagit County after leveling out before the county entered Phase 2 earlier this month.

On Saturday, Skagit County reported nine new cases — the largest single-day increase since early May, according to data from the state Department of Health.

The department reports that face coverings are effective in slowing the spread of the coronavirus that causes COVID-19, and especially helps those who are infected but have no symptoms from passing it to others.

Face coverings must cover both the mouth and nose, according to the state’s order.

“I think it’s valuable and we need to do everything we can to skew the odds in our favor and in everyone else’s favor,” said Lynn McKay of Seattle, as she browsed through racks of clothes Saturday at House of Style in Mount Vernon.

Across the street, Dilly Dally Antiques owner Kathy Tellesbo said about 90% of customers have been wearing face coverings.

Some are exempt from the order, including those with medical conditions that may make it difficult to breathe with a face covering.

Tellesbo said she has posted a sign at her door reminding customers of the requirement. Other businesses are offering masks at the door for those who don’t have them.

Tim Church, spokesperson for the state Department of Labor & Industries, said businesses in most of the state won’t be penalized for customers entering without a face covering. He said there are extra conditions only on businesses in Yakima County, where the outbreak has been severe.

Violation of the statewide order for those not wearing face coverings is a misdemeanor and punishable by up to 90 days in jail and a $1,000 fine, according to the Associated Press.

However, it’s unclear how the order will be enforced. Local law enforcement agencies have stated they will focus on voluntary compliance and education before enforcement.

“The statewide face covering order is a public health and safety measure, it is not a mandate for law enforcement to detain, cite or arrest violators but rather an evidence-based and safety focused directive meant to slow the spread of a potentially deadly disease,” a statement from the Skagit County Sheriff’s Office said.

Not all agree with the requirement.

Vic and Tammy Brooks of Roy, a city in Pierce County, wore face coverings while shopping in downtown Mount Vernon on Saturday afternoon, but said they were not in support of the mandate.

Vic Brooks said it doesn’t make sense masks are required in some situations but not in others, such as when eating at a restaurant.

“I think precautions should be your own choice, not mandated,” he said.

Rebecca Chase, of Seattle, and Elizabeth Murphy, of Shoreline, who were in downtown Mount Vernon on Saturday, said they both support mandatory face coverings.

Chase said she disagrees with the requirement that children as young as 5 should wear face coverings, and that kids should be able to breathe in fresh air while playing outdoors.

Murphy said she saw face coverings as a small sacrifice to help protect those with compromised immune systems.

“I think it’s short term,” she said. “I don’t think we’ll be doing it for longer than a year.”

As of Saturday, Skagit County had confirmed 502 cases of COVID-19 — an increase of nine from the previous day — including 56 who are hospitalized or have been hospitalized and 15 who have died.

A total of 431 people have recovered from the disease.

I don't understand how a person who has health issues can get away with not wearing a mask. Shouldn't they be staying home? I work in the food services industry and I don't feel safe when someone comes up to order their food without a mask on. I have to wear a mask and I expect everyone to wear one. Does their health issue prevent them from infecting me with the virus? Did I miss something here? We have instacart, uber eats, and doordash nowadays so if you can't wear a mask, stay home and use these services. If you can't or don't want to pay the fees to use these services I'm pretty sure you can find churches or other volunteer groups who would be willing to help people with health issues that prevent them from wearing masks. I've already expressed this concern with my employer and made it clear to them that I will not be serving anyone that is not wearing a mask. I'm a 51 year old Latino male with underlying health issues and will not put my life on the line to serve people who are not wearing masks. Does wearing a mask for 5 minutes to place your food order really going to kill them? I highly doubt it, but 5 minutes of them splattering me with their spit could mean death to me.... Inslee needs to reconsider allowing these people with so called health issues to go out in public without wearing a face mask.