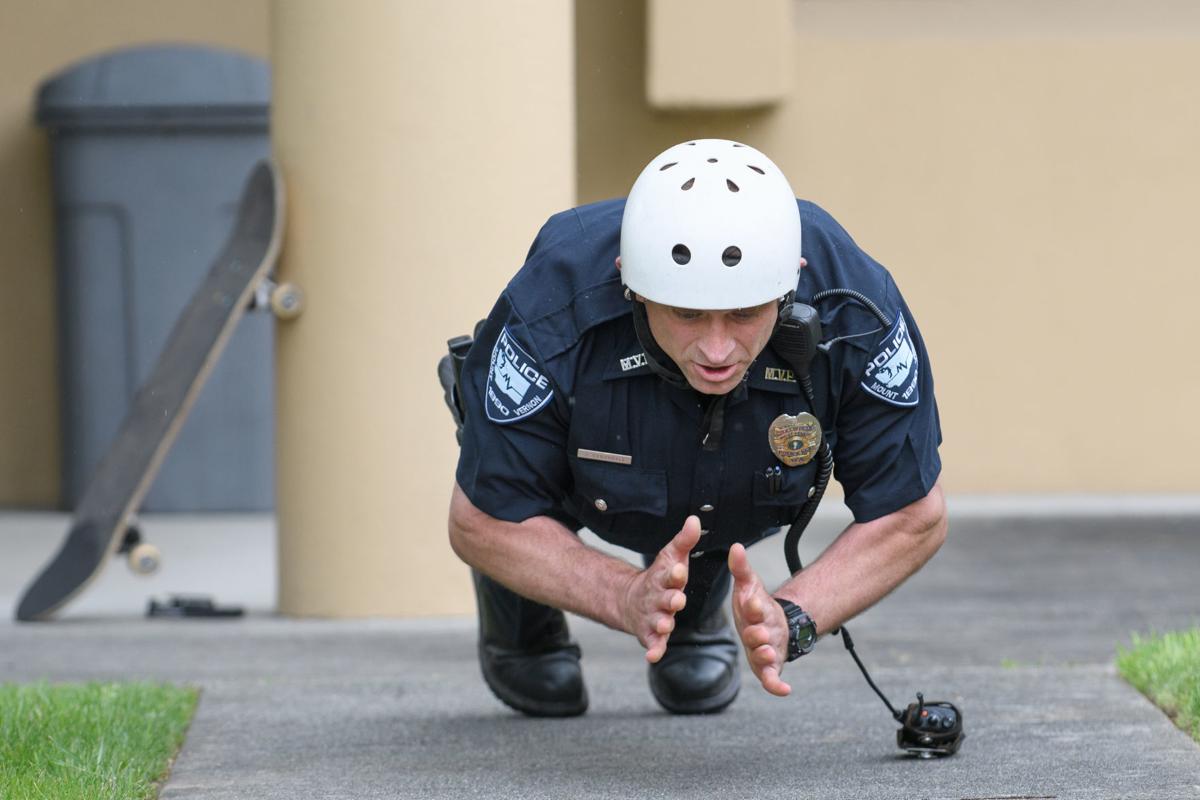 Mount Vernon police officer Jon Gerondale caps off Thursday the push-up portion of this week’s segment of the Fit at Home Challenge with a clap between push-ups. 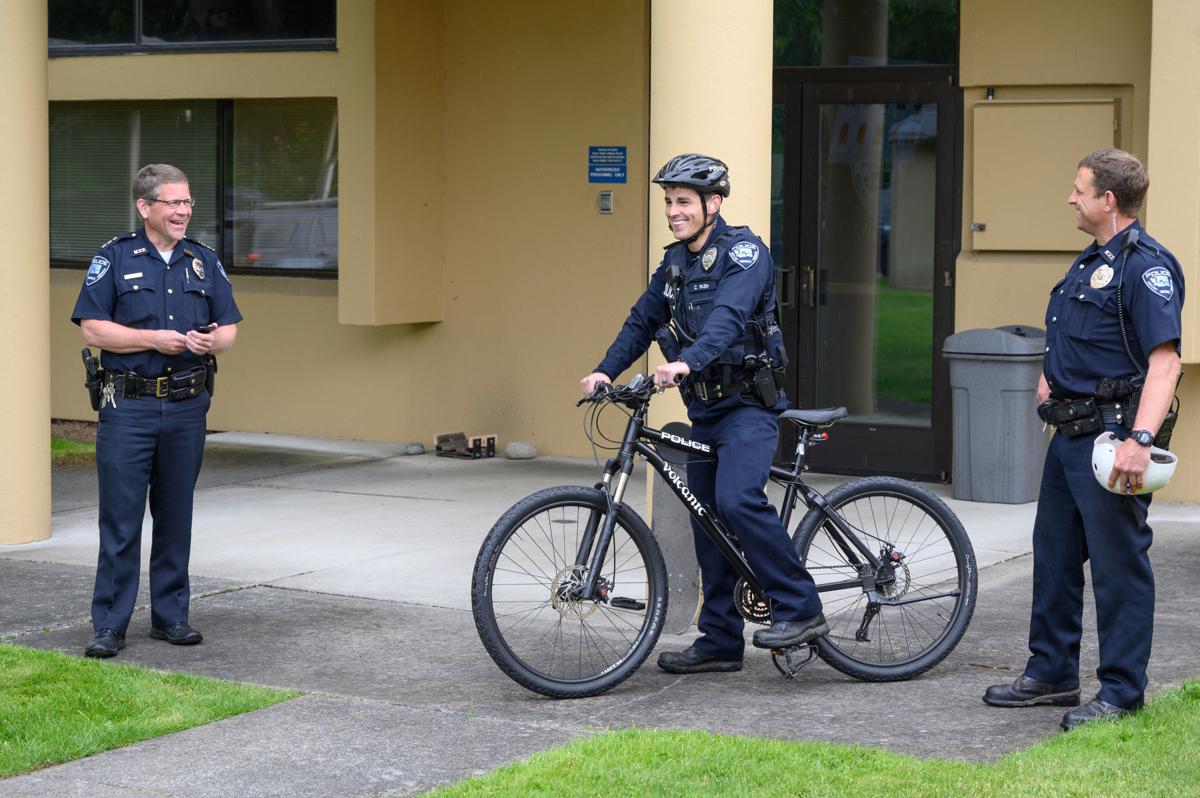 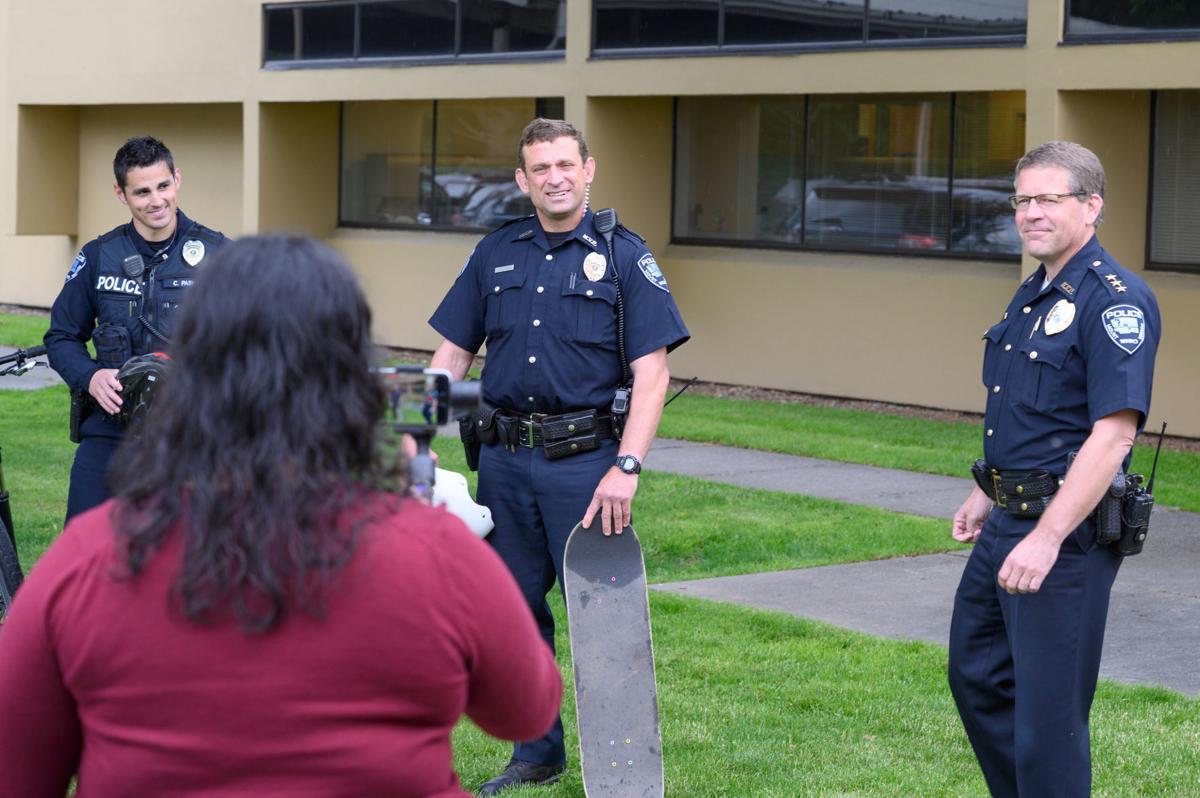 Candy Galindo, production assistant at Mount Vernon’s TV10, films officer Jon Gerondale (center) on Thursday as officer Chris Pash (left) and Chief Chris Cammock look on during the making of an episode of the Fit at Home Challenge . 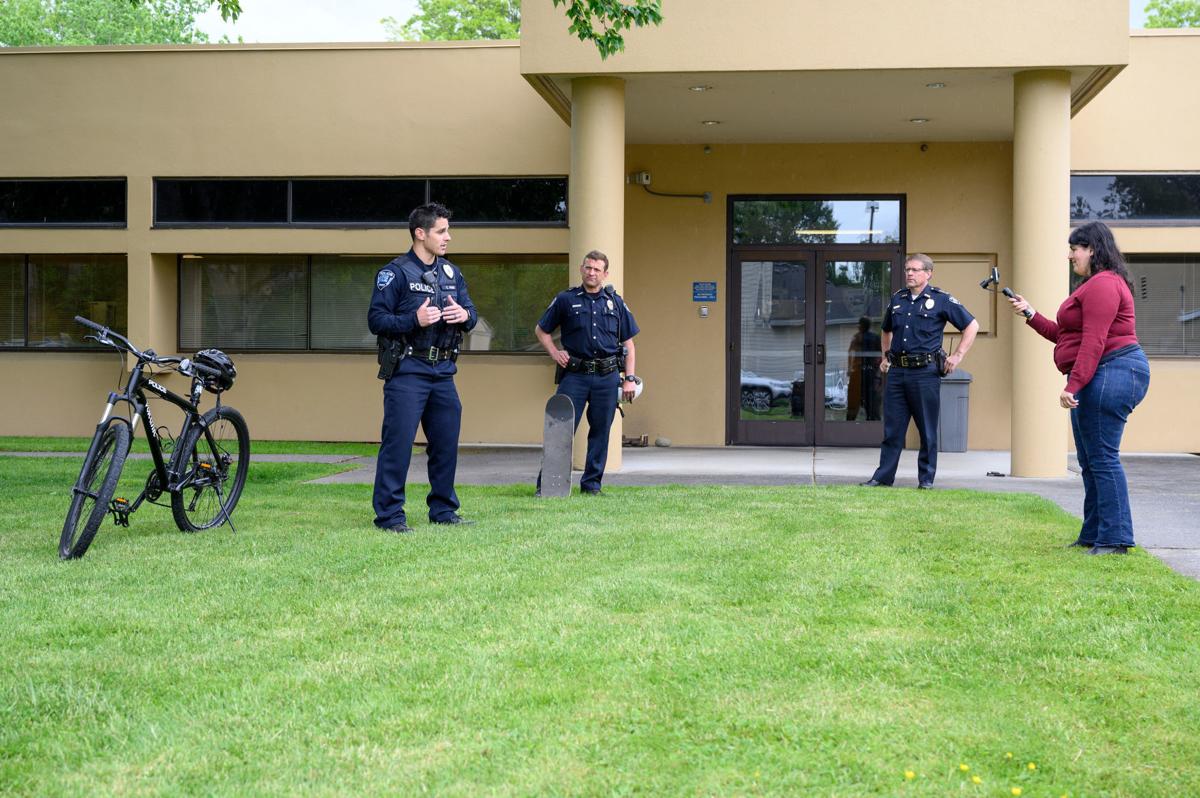 Mount Vernon police officer Jon Gerondale caps off Thursday the push-up portion of this week’s segment of the Fit at Home Challenge with a clap between push-ups.

Candy Galindo, production assistant at Mount Vernon’s TV10, films officer Jon Gerondale (center) on Thursday as officer Chris Pash (left) and Chief Chris Cammock look on during the making of an episode of the Fit at Home Challenge .

MOUNT VERNON — Like police work, fitness doesn’t have to stop because of the COVID-19 pandemic.

In their full police gear Thursday, Gerondale, Pash and Chief Chris Cammock filmed themselves exercising for the second installment of what the department is calling its Fit at Home Challenge that is aimed at kids.

“We know a lot of you are stuck at home not going to school and you can’t play with your friends at recess or in P.E. class,” Gerondale said during the first video, posted on the department’s Facebook page. “We wanted to come up with a way to keep you guys all healthy and strong.”

The fitness challenge, where Pash and Gerondale demonstrate different exercises each week, is an at-home extension of the Falcon Fitness program Gerondale, the department’s middle school resource officer, helps lead at LaVenture Middle School, he said.

With the statewide school closure due to the pandemic, students are without things such as P.E. and the Falcon Fitness program, Gerondale said.

“Those kids don’t really have an opportunity to work out at the gym anymore,” he said.

The idea to make the fitness videos was inspired by the Books and Badges program launched recently by the Sedro-Woolley Police Department as its way of connecting with youth during the school closure.

“I thought that was really cool,” Gerondale said. “Could there be a way for Mount Vernon officers to connect with kids?”

In the first installment, Pash and Gerondale demonstrate the safe way to do push-ups — including the special way officers have to do them at the police academy — jumping jacks and air squats.

“It’s cool to keep things pretty simple,” Gerondale said. “(Things) that they could do in their front yard.”

For Pash, creating accessible exercise programs is second nature. Before becoming a police officer, Pash worked with the Nooksack Indian Tribe creating health and fitness programs for youth, he said.

Those programs were so well received, the tribe asked him to create a similar program for its elders.

What that experience taught him was the importance of building community, Pash said. It’s a lesson that carries over into being a police officer.

“A lot of times, we’re trying to make roads into communities,” Cammock said. “Fitness is a vehicle to connect people.”

That community policing approach has been successful within the department, Cammock said.

“It’s a good way to see behind the badge and see what we do as people,” Gerondale said. “It makes officers in the department more approachable. Maybe someone who was hesitant to call the police with something, maybe they will want to call us now that they see we’re approachable.”

The segments are recorded by Candy Galindo, production assistant with the city’s TV10 channel.

“We really enjoy working with the police department,” Galindo said. “(These videos) are a great way to connect with kids and it’s a fun way to make (officers) seem like real people.”

Between the Fit at Home Challenge and the Books and Badges program, some kids may be inspired to become police officers, she said.

For the episode to be posted this week, Gerondale and Pash incorporated skateboards and bicycles, things kids might already have at home, while Cammock demonstrated how to do a “backyard chase.”

New challenges are set to be posted on Wednesdays.

With parent or guardian permission, children are encouraged to record that they completed the challenge and how long it took them, and post it to the department’s Facebook page, Gerondale said.

Those children will be entered into a raffle to be held July 1, he said. The winner will receive an at-home visit from Gerondale and Pash, and the opportunity to explore the inside of a police vehicle — even turn on the lights and siren.

The department is in the process of collecting donations for a second round of raffle prizes for children who participate, Gerondale said.

As of 4:03 p.m. Sunday, Skagit County had confirmed 425 cases of COVID-19, including 49 who are hospitalized or have been hospitalized and 14 who have died.

A total of 239 people have recovered from the disease.