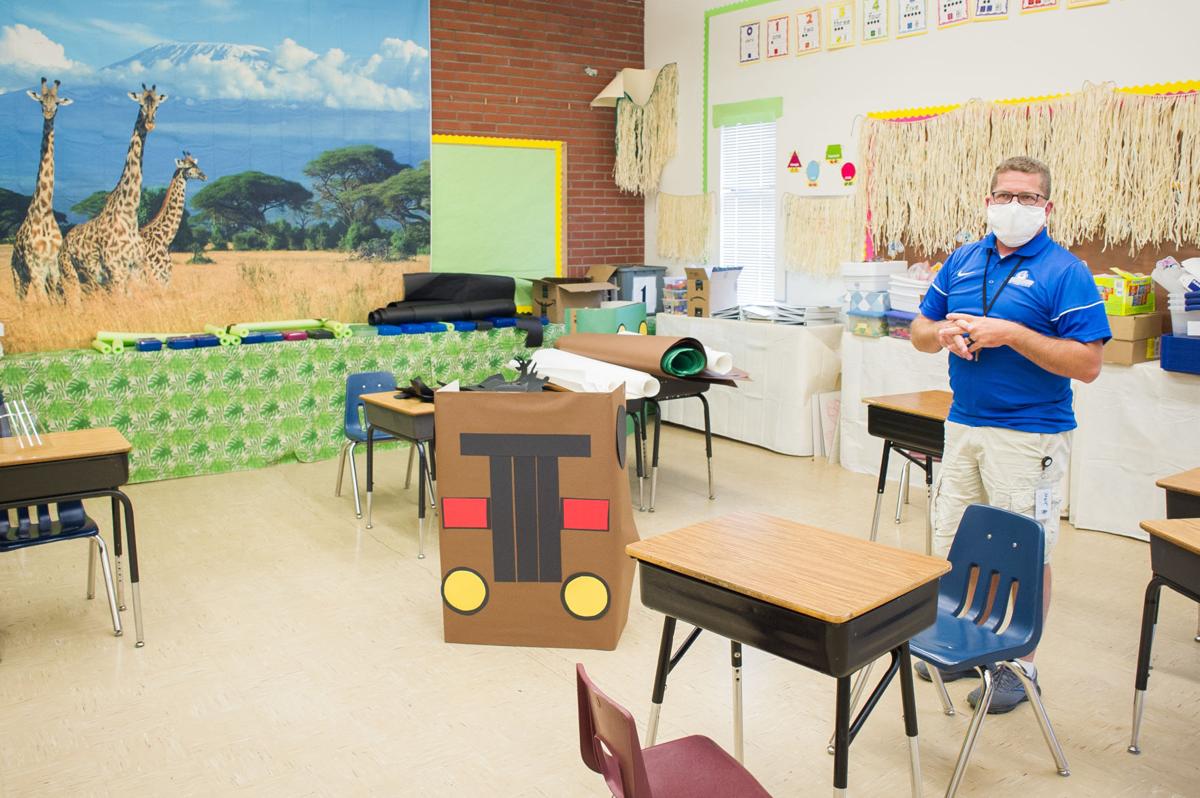 Mount Vernon Christian School Superintendent Jeff Droog explains plans for the upcoming school year in a first grade classroom Tuesday. The safari themed classroom will be equipped with cardboard illustrations of Jeeps to encourage students to practice social distancing. Other classrooms will have different themes with the same social distancing goal in mind. 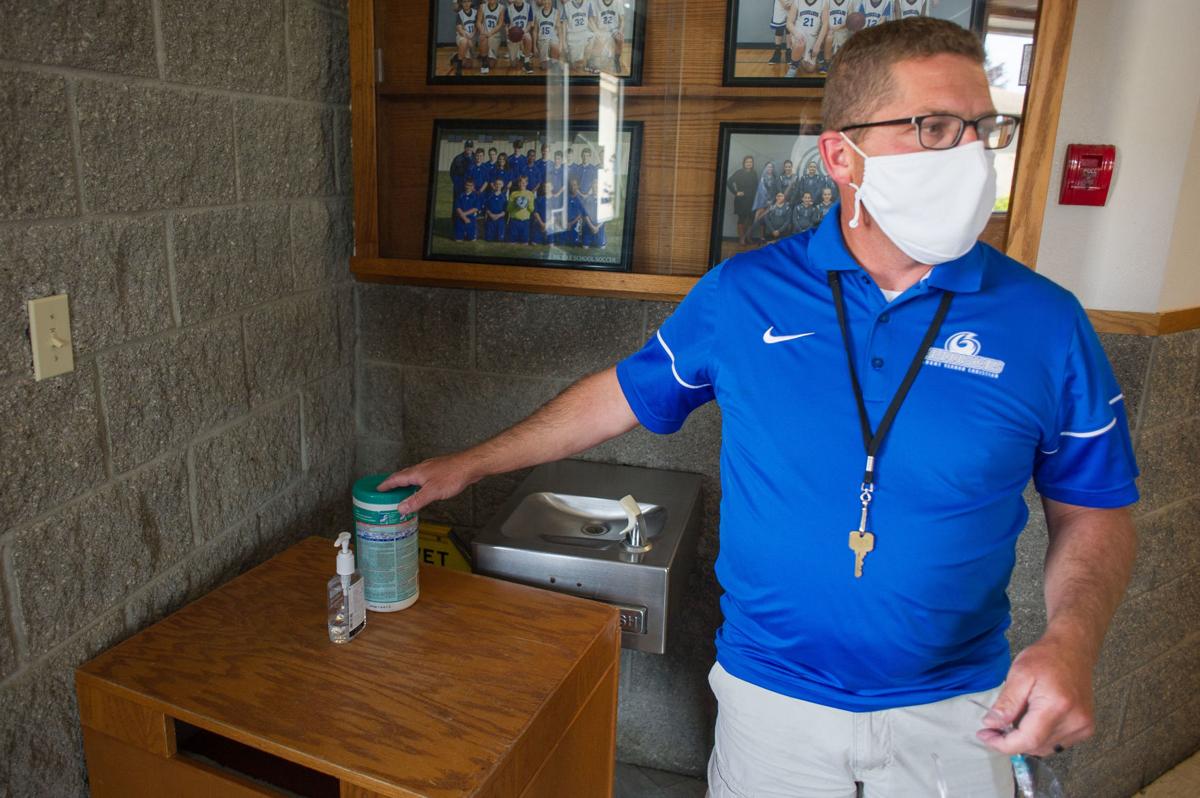 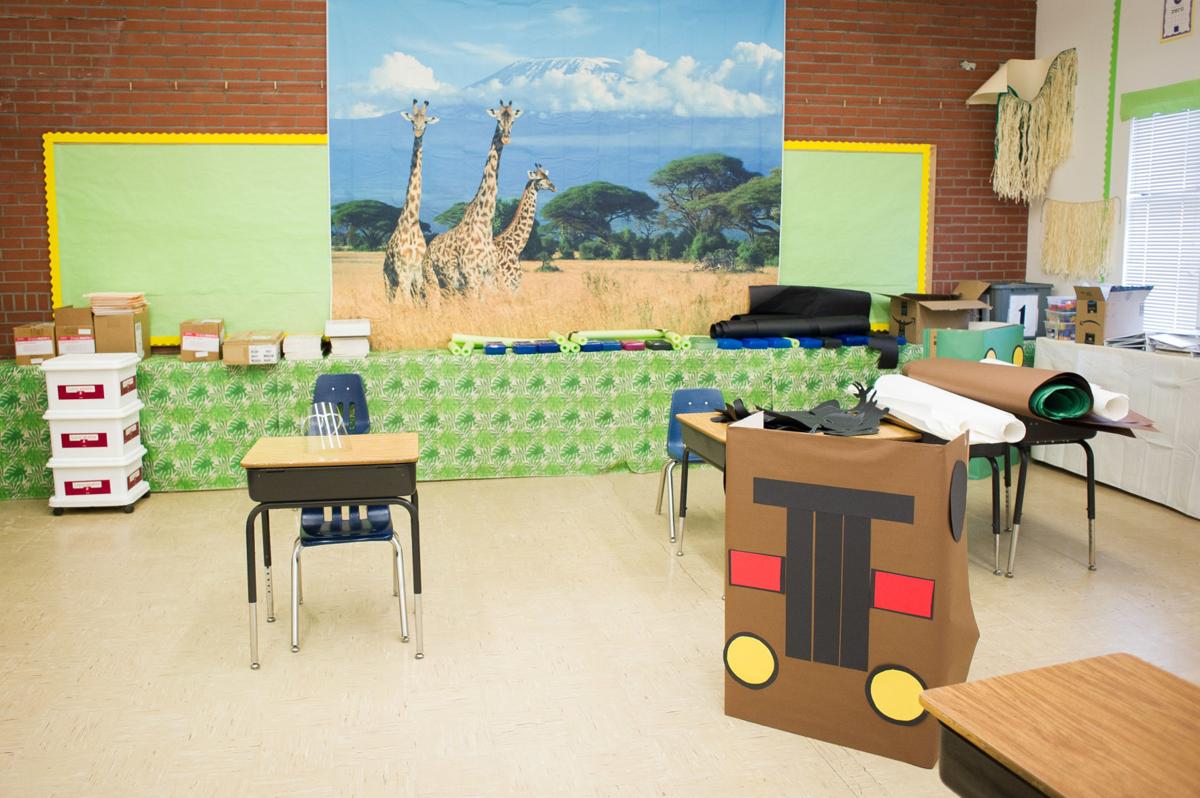 A first-grade classroom at Mount Vernon Christian School has a safari theme. Desks in the classroom will be equipped with cardboard illustrations of Jeeps to encourage students to practice social distancing.

Mount Vernon Christian School Superintendent Jeff Droog explains plans for the upcoming school year in a first grade classroom Tuesday. The safari themed classroom will be equipped with cardboard illustrations of Jeeps to encourage students to practice social distancing. Other classrooms will have different themes with the same social distancing goal in mind.

A first-grade classroom at Mount Vernon Christian School has a safari theme. Desks in the classroom will be equipped with cardboard illustrations of Jeeps to encourage students to practice social distancing.

While most students in Skagit County prepare to start the school year with online-only instruction, some will be heading back into classrooms.

Though public schools in the area have announced they will begin the school year mostly online, some private schools intend to hold in-person classes.

“We believe it’s best for the students,” said Aubrey Fautheree, principal at Skagit Adventist Academy in Burlington. “We all made it through last spring (online), but even in the best-case scenarios it wasn’t the quality of learning that students get in school.”

While Gov. Jay Inslee recommended last week that all schools — public and private — begin the school year online, he made clear that was a recommendation, not a mandate.

While Skagit County Health Officer Howard Liebrand said he agrees with Inslee’s recommendation overall, he said schools that have the resources and ability to safely reopen should do so.

“If it can be done in a safe manner, we should do what we can to have in-person schooling,” Liebrand said.

Schools that go in person will comply with health and safety regulations set out by the CDC, state and local health departments, and the state Office of the Superintendent of Public Instruction, Fautheree and Droog said.

“We’re following all the guidelines to the letter,” Fautheree said.

Those plans include mandatory face coverings, daily temperature checks, changes to pick-up and drop-off sites, reduced class sizes with physically distanced desks, and reducing the amount of student movement in the buildings.

“We have a plan in place,” Droog said. “We believe it’s as good as we can have right now.”

Mount Vernon Christian had planned for an early start to school — Aug. 17 — so that teachers and students could get in-person training on an online teaching model should the school be required to shut down in the coming months, Droog said.

“Our goal was: Let’s get them in school and teach them all the systems for remote learning and do assessments and see where they’re at socially, emotionally and cognitively,” he said.

The start date has now been pushed back to Sept. 1.

Another reason was because of an increase in enrollment, Droog said.

In the span of about a week after public school districts in Skagit County began announcing their plans for online learning, Droog said the school’s enrollment increased by about 90 students — nearly one-third of the school’s usual about 300-student population.

With increased enrollment and reduced class sizes comes the need for additional teachers, Droog said. The school has added five teachers this year, he said.

There has also been increased interest in Skagit Adventist Academy, Fautheree said. However, the school will not accept more students than it can accommodate.

“When we get full, we’re able to say no more,” Fautheree said.

Private schools such as Skagit Adventist Academy and Mount Vernon Christian don’t have the same requirements to provide meals and transportation as public schools do, Droog said.

“That allows us to pivot and flex because we have less things we need to do,” he said.

Even with plans in place to bring students back, this year will be unlike previous ones, Fautheree said.

“The adjustments that we’re all having to make is going to be the biggest challenge,” he said. “Whatever we think it’s going to look like on Day One, by Day Two we’re going to have to make adjustments.”

Should the schools need to close, both administrators say they will be able to transition easily to remote learning as they did last spring.

“If we have to pivot again, it wouldn’t be that different from what we did previously,” Fautheree said. “We went online every day with our kids, our teachers were face-to-face via technology the entire spring.”

The school is telling its parents about the need for proper safety precautions away from school.

“What they do at home is going to have an impact on what we’re able to do at school,” Fautheree said. “One person can mess it up for all of us. So we have to work together as a community to make this work.”