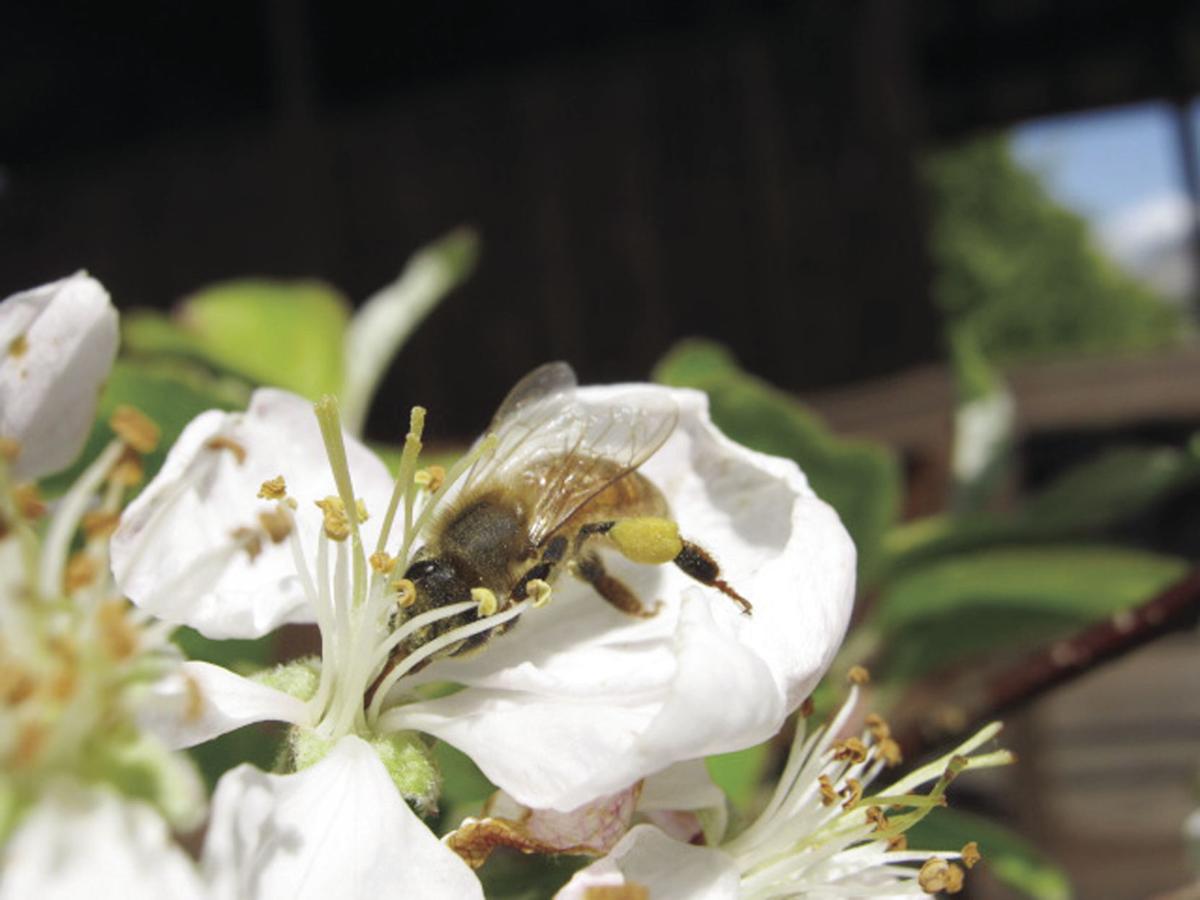 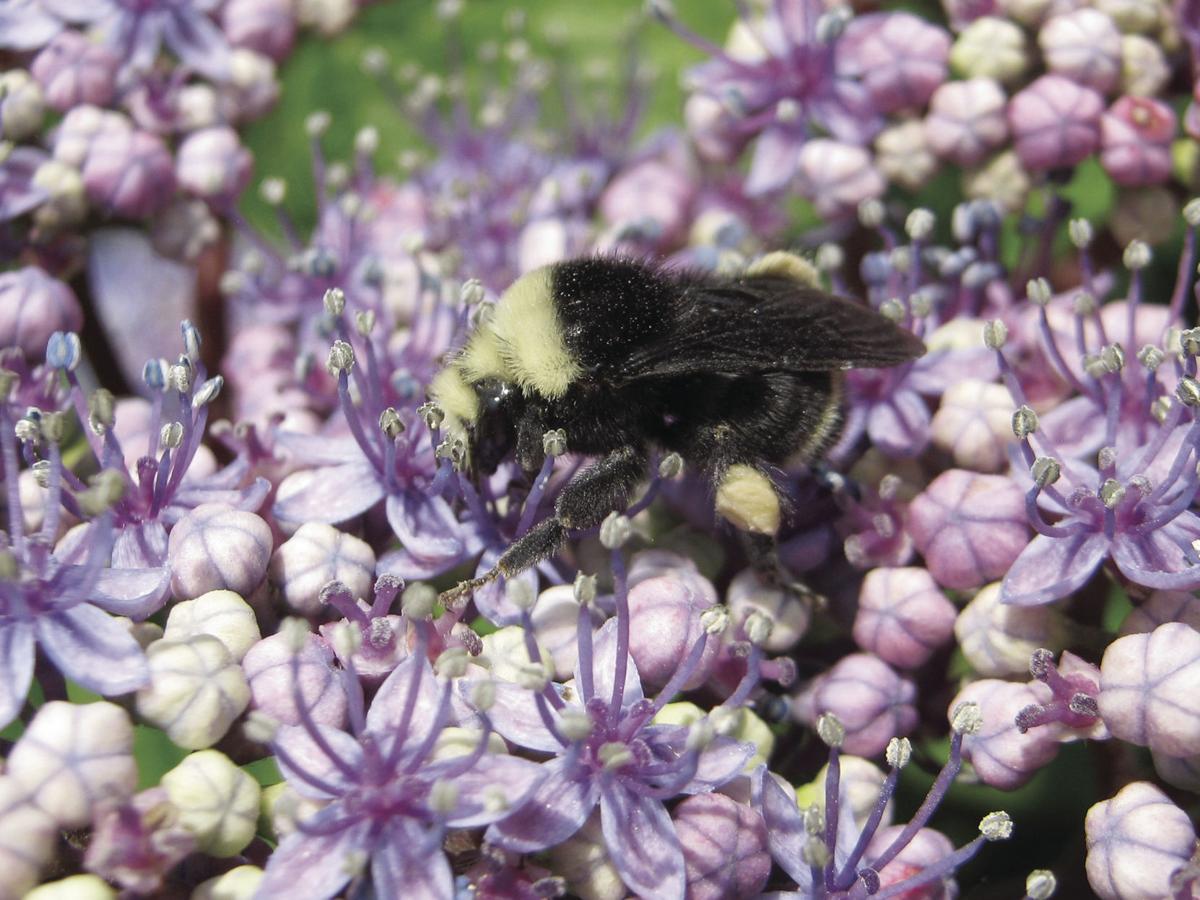 A bumblebee on lace-cap hydrangea. 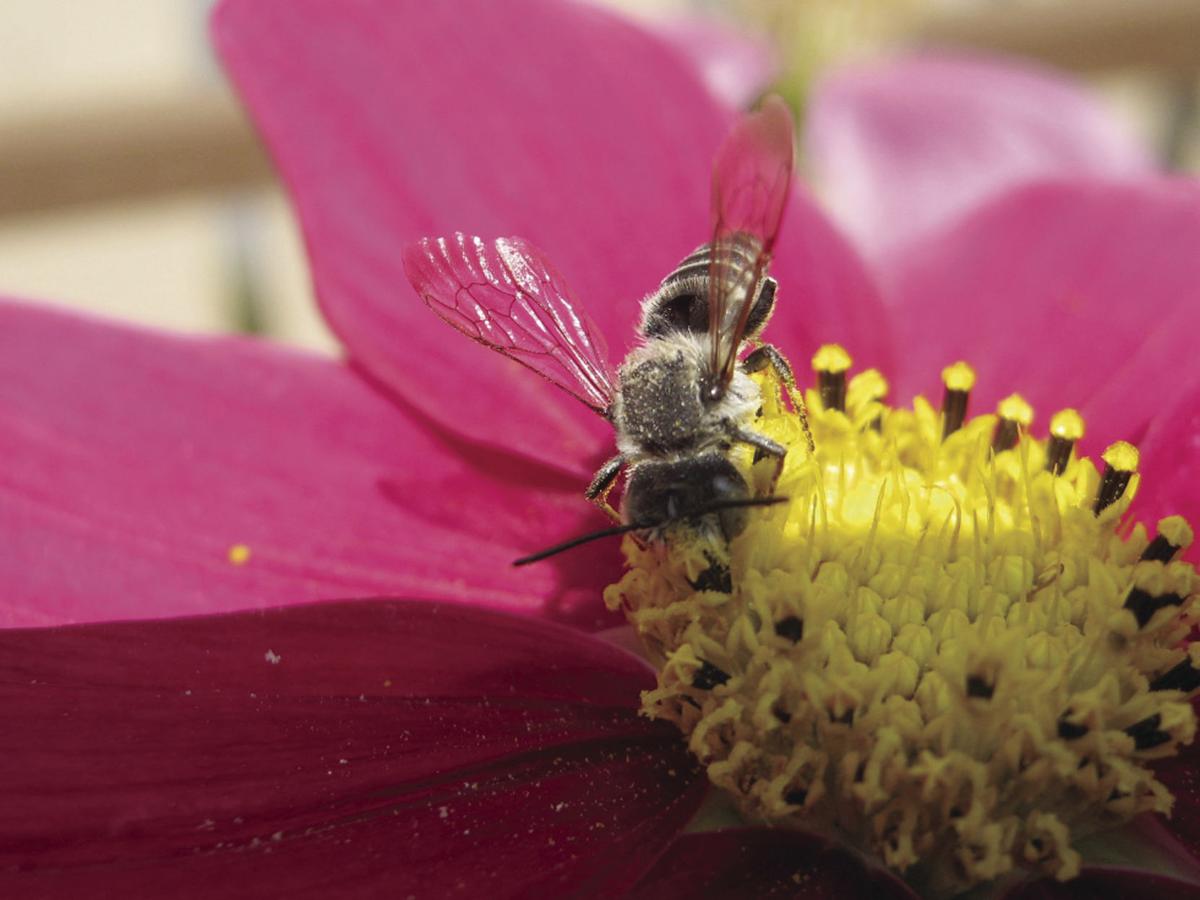 A hoverfly on cosmos.

A bumblebee on lace-cap hydrangea.

A hoverfly on cosmos.

Perhaps you too have noticed the lack of “buzz” in your garden. It’s certainly in the news that pollinators are dying off, due to many problems.

In addition to a century of pesticide use, herbicide use, parasitic mites and infection, now climate change is creating havoc with their welfare.

So, what is pollination and why do we need it? Pollination is the act of procreation of plants. Pollen from the male anther is moved to the female stigma that is in communication with the ovary. Making seeds is one of the many ways plants produce offspring.

Pollen must be transferred between the same variety of plant. Species are a population of individuals capable of freely interbreeding. They do not interbreed with other species. In plants, there is also self-pollination.

While we generally think of insects as pollinators, wind, water, birds and bats may also pollinate. Grasses are an example of wind-pollinated plants, including our domesticated cereal grains, as are trees, including many nut species.

Aquatic species of plants are pollinated by pollen floating on the water. Also, rain can splash pollen from one flower to another.

Hummingbirds are great pollinators of flowers. They are attracted to red, whereas bees are not. Opossums, shrews, reptiles, slugs and snails also pollinate, not necessarily intentionally.

Elsewhere in the world: Lemurs pollinate palms and mongoose and genets pollinate sugarbush. Think of the nectar as candy.

Food crops include fruits, nuts, berries, tomatoes, cucumbers, carrots, melons, squash and brassicas (the family of cabbage, broccoli, kale, Brussels sprouts, radish and mustard). They provide most of the vitamins and minerals necessary for good health. Peas and beans are self-pollinating, but crop production is enhanced by insect pollination.

Alkali bees pollinate alfalfa. In fact, Walla Walla County claims to have the only government-created speed limit for an insect. The back roads are adorned with orange traffic signs warning: Speed limit 20 MPH, 8 a.m. till 8 p.m., alkali bee area.

Other insect pollinators include flies, beetles, wasps, butterflies and moths. Hover flies maneuver like little helicopters — up, down and sideways. Their larvae (maggots) eat aphids or recycle plant waste.

Adult soldier beetles — named for their colorful orange and black wings — pollinate, while their larvae (grubs) are predators. Wasps, moths and butterflies fuel themselves with nectar.

The larvae of butterflies and moths are caterpillars. Caterpillars feed on leaves and grasses, so it is important to tolerate some level of damage. Perfection doesn’t occur in nature nor is it required or achievable in your garden.

n A habitat including trees and shrubs provide nesting, hiding, foraging and egg-laying sites. Include some native plants as our local insects evolved with our native plants. Too often imported plants bring in non-native pests that become invasive species.

n Provide a flower-rich foraging area. Choose a variety of plants, so flowering is spread over the whole season, from late winter to late fall. That way, if a bumblebee wakes up on a cool day, there is something to eat. Plant close together for ease of access.

n Many insects are small and can reach only into small flowers. Examples include herbs like lavender, dill, rosemary, anise, Coreopsis, Cosmos, alyssum, candytuft, groundcovers and clover. Poison hemlock has an umbel, but please do not use it. Fight it and other noxious competitors.

n Lawns can be productive for pollinators as long as they are not treated with chemicals. Do not use pesticides or herbicides. Dig out problem plants or spot treat. Do not mow every week, but maybe every other week. Tolerate a few dandelions and white clover as they are used by pollinators. Animals — including humans — require an environment free of pesticides and herbicides.

n Provide a hummingbird feeder for our Anna’s and rufous hummingbirds. Do not use honey, artificial sweeteners or fruit juice. Use cane sugar, not beet sugar. Feeders provide extra nectar for fueling in cool temperatures and for the newly fledged. Clean them frequently to avoid mold.

n Provide water. Birds, bees and other insects need water and a landing “pad” or escape route. Butterflies congregate on wet mud to acquire minerals as well as water.

Pollination provides seeds for next year and winter food, not just for us, but for our fellow Earthlings. Expand habitat at your own pace. There is no reason to tear up your entire lawn or garden. Start with a corner and work from there.

In 2008 there was $3 billion in value from Oregon and Washington pollinator-dependent crops. Common sense and attention to habitat are small prices to pay to ensure the health and well-being of our pollinator populations.

— Virgene Link-New is a Washington State University/Skagit County Master Gardener. Questions may be submitted to the WSU Extension Office, 11768 Westar Lane, Suite A, Burlington, WA 98233. 360-428-4270 or skagit.wsu.edu/MG. Consider becoming a master gardener. If you are interested, please contact the previous website.