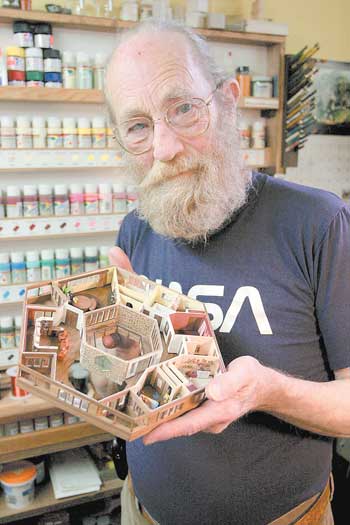 Caveman Al holds one of the unique small-scale homes he has designed and built. The home and many of his other small sculptures are displayed in his home studio behind the Keystone building. 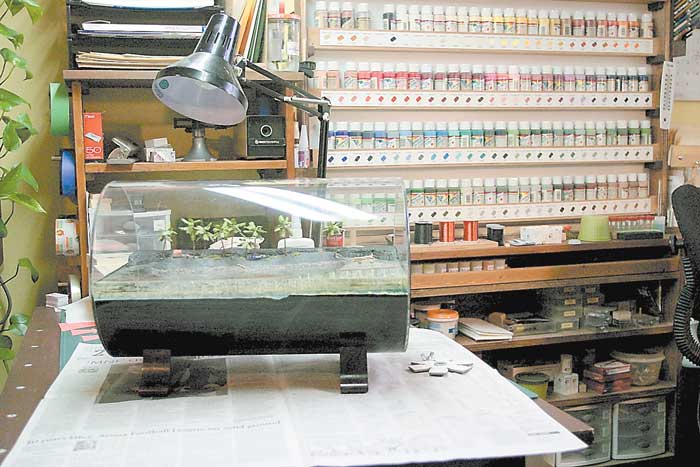 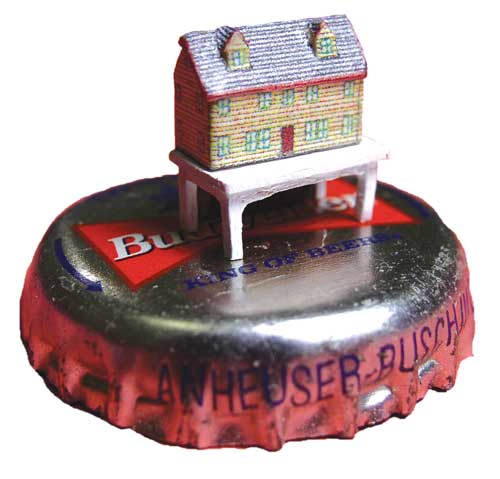 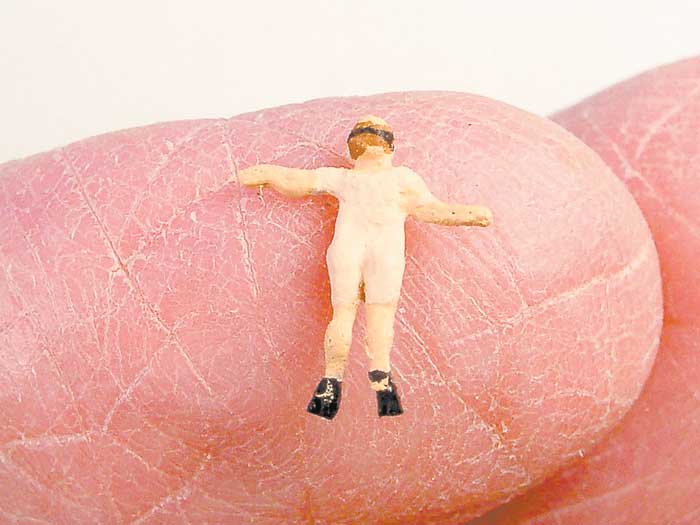 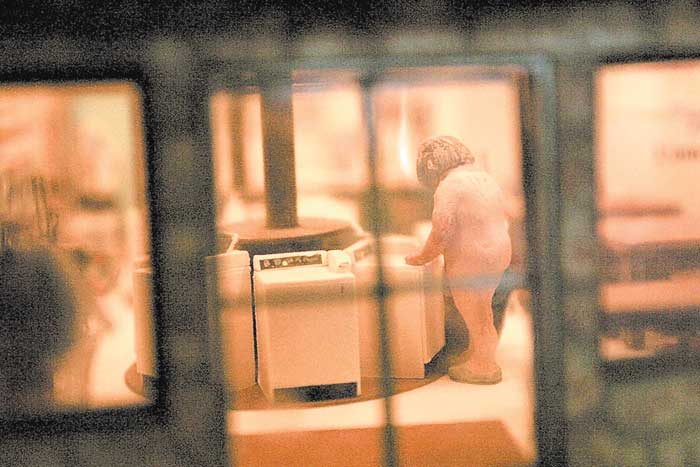 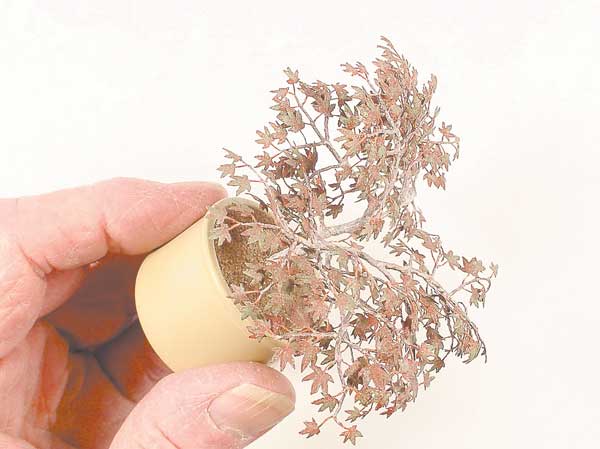 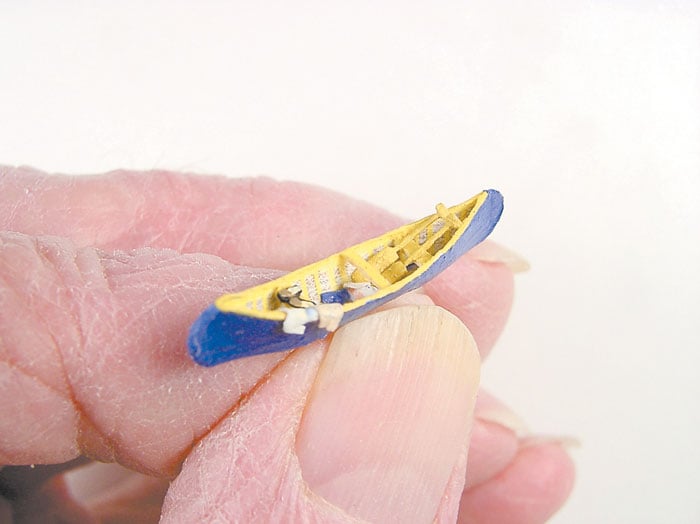 Caveman Al holds one of the unique small-scale homes he has designed and built. The home and many of his other small sculptures are displayed in his home studio behind the Keystone building.

“Caveman” Al Smith has an unfinished three-bedroom house with an indoor pool listed for sale at $150,000 — although in these challenging economic times he might just consider an offer from a serious buyer.

The artist spent more than 8,000 hours building the home by hand. The catch is, no one can live in the custom two-story structure, because it is only 10 inches tall. The piece, which he calls “Out to Lunch,” is one of the most elaborate of Smith’s whimsical creations.

Al’s Gallery of Small Sculptures, the artist’s home studio behind the Keystone Building at 615-1/2 Commercial Ave., is one of the hidden delights of Anacortes, filled with tiny, exquisitely detailed and often humorous art that rarely fails to awe visitors.

Homes have been one of Smith’s favorite subjects since the beginning.

“I’ve been designing houses myself since I was 8, sometimes houses I lived in,” he said. “There’s several houses that have been built I did design.”

But he never considered becoming an architect.

He certainly does not consider his endeavors work. “I call it fun,” he said.

Depending on the species of plant, a single tiny leaf can take him between 15 and 28 minutes to make. One miniature tree can have hundreds of leaves.

While not always an artist by vocation, he has always been an artist. Building small things has been his passion as long as he can remember.

He was 8 years old and living in Spokane when he discovered miniatures.

“My little brother was in the hospital at Christmas. They wouldn’t let us take in a Christmas tree, so I built him a little one and I’ve been building little ones ever since,” he said.

A Washington native, he landed in Anacortes 12 years ago, after coming to the area to see why his late daughter loved it so much. He had an RV packed and ready to go cross country, but stayed. Now he said he can’t imagine living anywhere else.

His unique art quickly drew attention, and he’s been featured in several news articles over the years. He got his nickname after Gale Fiege of the Anacortes American compared his studio to a cave.

“Everyone calls me Caveman Al because of that article,” he said.

Since retiring he has sculpted full time. He keeps track of his time and calculates his prices based on about $7 an hour.

“My time is worth something, even when I work on these little plants,” he said. “On the bigger stuff I figure a little more.”

A fairly simple piece, such as “A Rose Bush in a Clay Pot,” takes about 28 hours to complete and sells for $200. He makes each rose petal from vellum and coats it with a mix of polymer and marble dust, which he jokingly calls “secret sauce.” Rose leaves are liquid polymer ringed with a .005-inch diameter wire frame. Branches are strands of twisted wire coated with marble-saturated polymer. The 1-inch pot looks like it’s clay, but is turned wood.

“Most of the plants are sheepskin covered with marble dust. The marble dust should last forever,” he said.

Sheepskin leather can be shaped and formed when wet, and dries hard. Smith colors the pieces then applies marble dust and sometimes paints them again after that. If you sawed through one of his trees you’d see layers of marble dust, he said.

“That was over years of trying to develop things, three years playing with how to make that leaf,” he said.

He was inspired by a drive to create a miniature maple.

“I had to come up with a way to get a serrated edge on it,” he said.

Eventually he hit on a technique to get the edges he needs: He traces a shape, pokes pinholes around it, then tears each leaf out. He doesn’t mind experimenting through trial and error.

But why go to so much trouble?

“I like the challenge. Period,” he said. “I want people to look at a thing and say, ‘How in the hell did he do that?’”

Some of his larger pieces are clever miniature tableaux, but viewers may have to look hard to see the story.

“Dinner Under a Willow Tree” is a sculpture about 12 inches tall of a weeping willow tree in a bonsai pot. It is named for an eagle at the top of the tree, which is checking out its dinner, a green snake, while the snake is eyeing a rodent under a root. It took Smith 1,009 hours over the course of 16 months to create. It has 8,080 hand-cut leaves and 505 branches, and the price is $20,000.

“Mother and Child” is a sculpture of a maple tree and her offspring in a hand-carved maple bonsai dish. In the tree are a mother and baby in a nest and on the ground are a mother and baby snake. In a hole under the tree are two sets of eyes — another unknown mother and child. Al logged 1,664 hours during the three years and seven months he worked on the piece. It has more than 2,800 handmade maple leaves, 500 ivy leaves and a bunch of ferns. The price tag is $35,000.

“Out to Lunch” was done in 48th scale, or 1/4 inch to 1 foot. It is named for the absent workers at the mock home, which shows various stages of construction, complete with teensy paint cans, ladders and power tools just waiting for tiny workers to finish sections of walls, carpets and trim.

“When I retired I was building this one a couple years full time. I just carried on from that point,” he said. “I started in ‘86 and eight years later it was done.”

Such small wonders make Al’s gallery a must-see when people make the rounds with out-of-town guests. Visitors can stop to see his art almost any time.

Many visitors him where he finds the patience for his tiny creations.

“The only thing you need patience for is people. Inanimate objects that you love, there’s no patience involved,” he said.

A chance encounter led to Smith’s biggest commission to date, “Lava Island,” an entire island in a bottle. The patron walked into the gallery and was charmed by a tree. He told the artist “If you can make a palm tree I’ll buy it.”

The order grew. The man runs a New York business from Hawaii, manufacturing specialty fabrics for hotel chains. Smith researched the area near his home and based the piece on a real island. The final artwork included nine palm trees.

“There’s four nude people in there and 120 fish and a lot of hidden things they might not see for years,” he said.

Of course the fish species are all authentic to the area.

“There are nine kinds of fish,” Smith said. “The fish in the school are about a 32nd of an inch.”

“Each time you step down the scale it increases the difficulty by considerable amounts. I don’t know if I’d do 1/92nd again,” he said. “It depends on what it is.”

When the piece was done, the patron flew Smith to New York so the artist could present it to him during a celebration in Central Park. This was a huge event for the artist, who is a pretty shy guy.

“I’m kind of a wallflower but my art is what speaks for me,” he said.