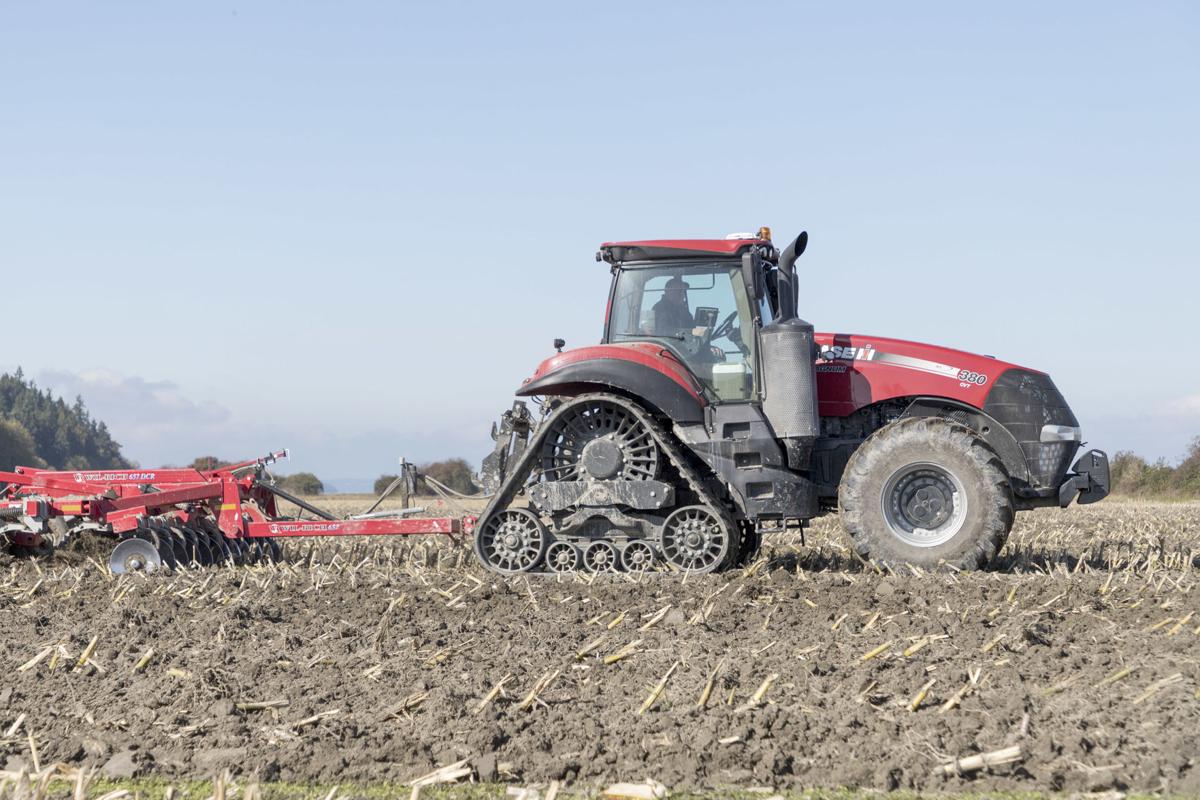 John Youngquist, a salesman for Farmers Equipment Co. in Burlington, drives a tractor through a harvested corn field Oct. 14 at Marine View Farms near Stanwood. While the tractor has GPS-guided auto-steering, it still needs a driver to operate it. 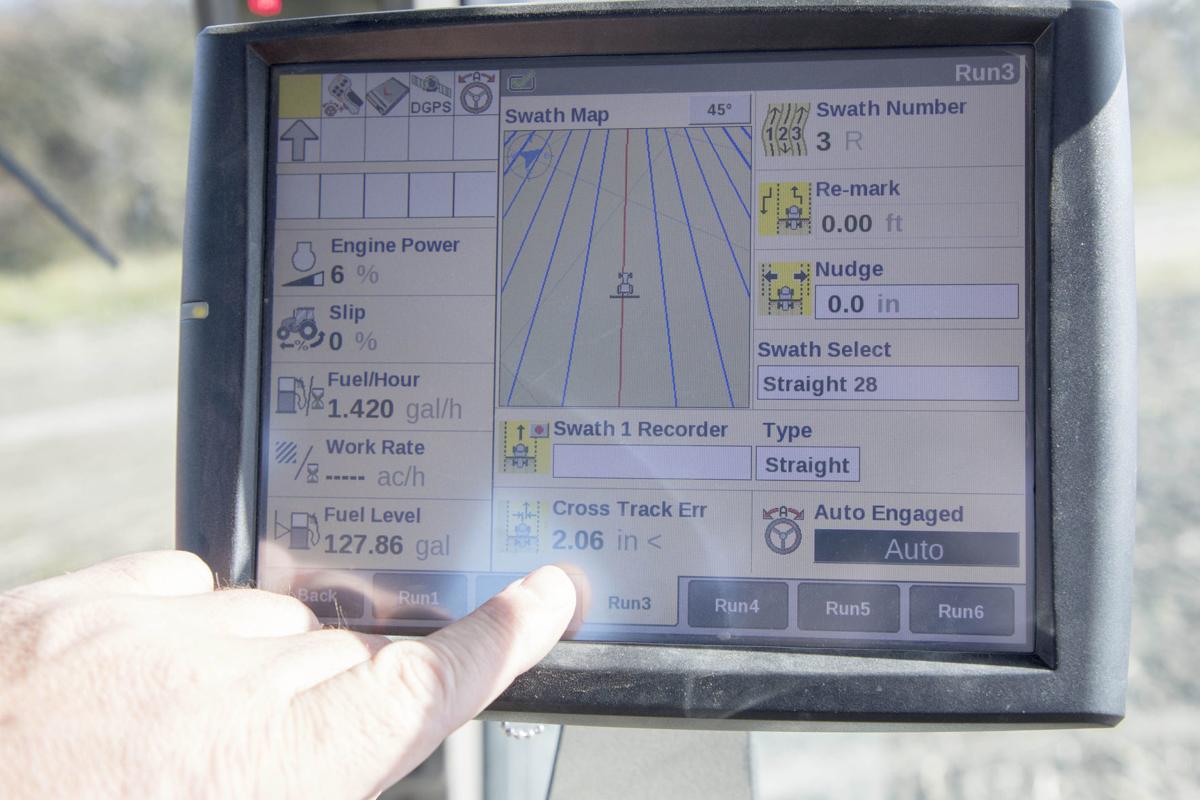 John Youngquist, a salesman for Farmers Equipment Co. in Burlington, points to a tractor’s auto-steering system Oct. 14 at a farm in Stanwood.

John Youngquist, a salesman for Farmers Equipment Co. in Burlington, drives a tractor through a harvested corn field Oct. 14 at Marine View Farms near Stanwood. While the tractor has GPS-guided auto-steering, it still needs a driver to operate it.

John Youngquist, a salesman for Farmers Equipment Co. in Burlington, points to a tractor’s auto-steering system Oct. 14 at a farm in Stanwood.

Robots are planting crops, weeding fields and milking cows on a few Skagit Valley farms, and many farmers use semi-autonomous tractors that can steer themselves.

Skagit Valley Farm has used a robotic weeder and planter for about five years, and the farm has plans to upgrade both robots, said founder and CEO Tony Wisdom.

As vision technology improves, new robots will be better able to distinguish a plant from a weed, he said.

And more technology is coming.

Wisdom said he expects to see fully autonomous — or driverless — tractors available to farmers in the next 10 years.

“If I’m looking in my crystal ball, that's something I see,” he said.

Tom Shields, Burlington location manager for Farmers Equipment Company, said while today's tractors still require a human operator, many drive, steer and turn themselves with the help of GPS satellites.

He said the technology has improved accuracy in farming and had reduced worker fatigue.

Some companies are developing driverless tractors. Wisdom said in the future one farmer could operate a fleet of autonomous tractors from a station, instead of needing a worker on each piece of equipment.

He said technology such as driverless tractors is appealing as labor costs go up and labor is harder to find.

However, there are legal hurdles and safety concerns that prevent farmers from using driverless tractors.

“I think legislation is not keeping up with advancement of technology,” Wisdom said. “Farmers are at a disadvantage because right now we can't use autonomous tractors.”

He said he believes as sensor technology improves, so will safety. Tractors will be able to correct themselves with the help of artificial intelligence sensors attached to the tractor.

“It will be a very complex algorithm that will involve deep learning and machine learning — if this, then that,” he said.

John Youngquist, a salesman for Farmers Equipment Co. in Burlington, said one of the main concerns with driverless tractors is moving them down a road.

"Traffic is probably the worst thing to get involved with," he said. "We have big equipment going down the road and it's dangerous."

He said he imagines that if autonomous tractors are used in Skagit County, the equipment would still have a cab to allow a worker to drive it safely down a road.

Cobb said a tractor drives over multiple beds of berries as robotic arms gently pick fruit. A vision system determines if the fruit is ripe.

The company is working with large California growers to test the technology, he said.

“Our equipment can operate day and night, and offers flexibility with harvest schedule,” he said. “Every grower is feeling cost pressure (with labor). We're making the work much easier for the workers involved.”

He said workers are still needed to pack fruit in containers, and operate and fix the robots.

Advanced Farm Technologies' robot is not for sale yet, but is instead offered as a service to farmers, Cobb said. While the company is now exclusively focused on strawberries, it hopes to expand to other crops, such as blueberries and raspberries, he said.

The blueberry crop in Skagit County in 2018 was worth an estimated $21 million, according to Washington State University Skagit County Extension agriculture statistics.

“There are companies working on mechanical harvesters for strawberries, but nothing that has a practical (return on investment) for our farm at this point,” Weeden said in an email. “Nonetheless, like all farms in the U.S., we are faced with less and less labor for hand-harvesting crops, and growing and harvesting costs continue to increase exponentially each year. The practical reality is we will need viable technological solutions to help address these challenges.”

Alan Mesman, an organic dairy farmer in Mount Vernon, said the robotic milking equipment he bought six years ago has helped fix the cost of milking cows, even as wages continue to rise.

Cows are milked on a reliable schedule and the same way each time, he said. The robotic milking machine has helped the farm produce 11% more milk.

He said other Skagit County dairies were planning to buy robotic milking machines, but scrapped plans after milk prices went down.

Big farms should be able to take on investing in technology, and smaller producers may lag behind, he said.

“Our farmers here are going to need to make sure they are following those trends, otherwise they will be left in the dust,” he said. “Markets are highly competitive, and a good deal of food here is distributed over the world. We need to make sure we are competitive in that marketplace."