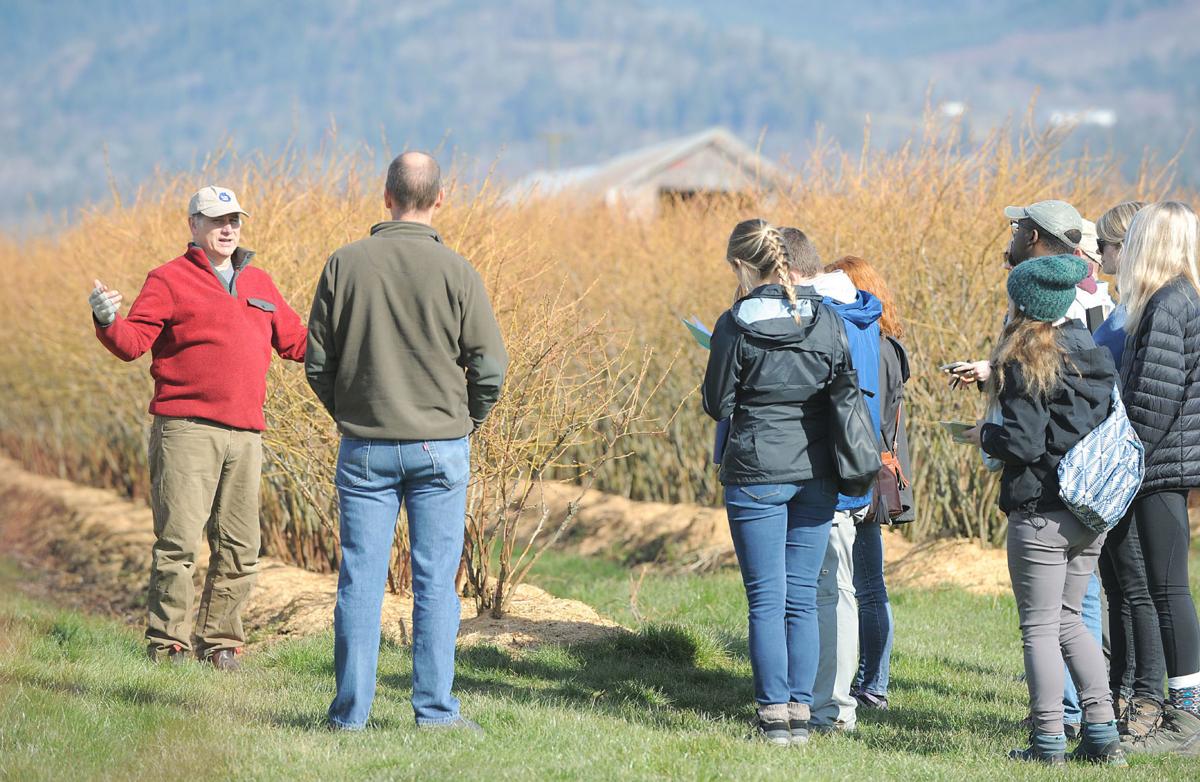 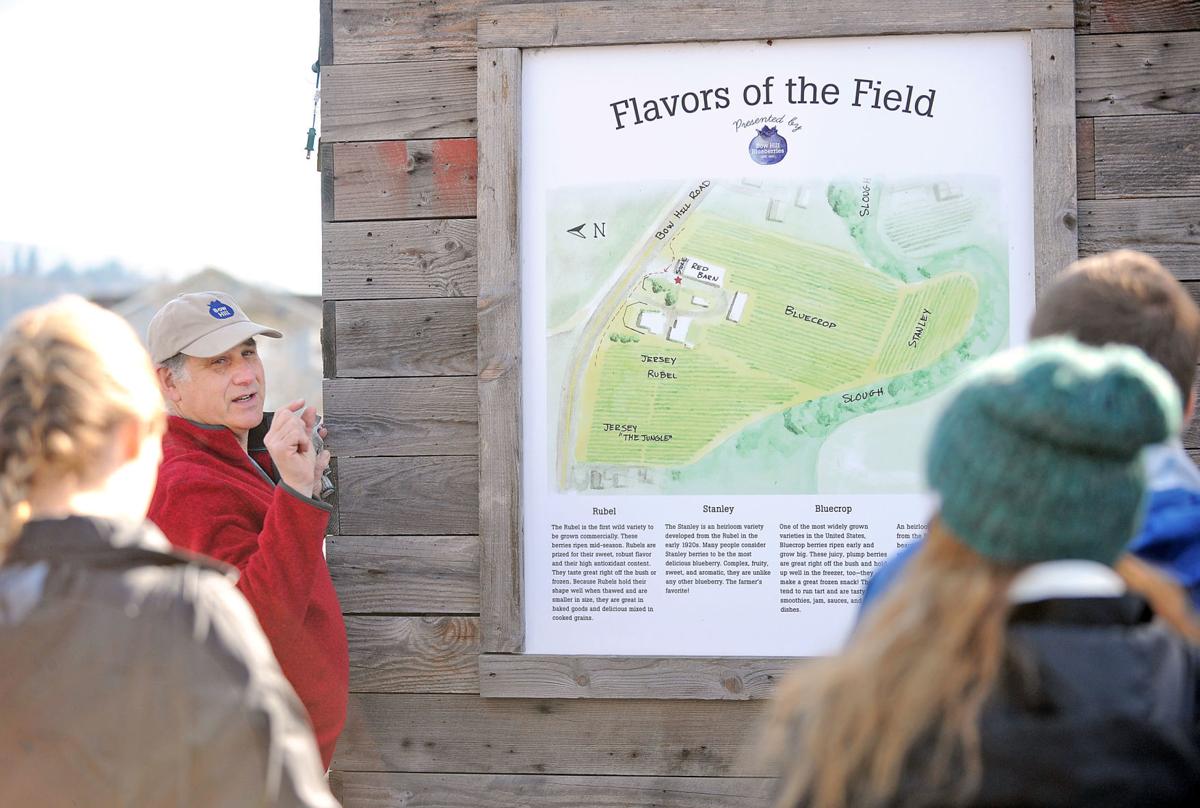 Harley Soltes of Bow Hill Blueberries explains the attributes of the blueberry varieties during a tour of the farm on Monday, March 12. Scott Terrell / Skagit Valley Herald 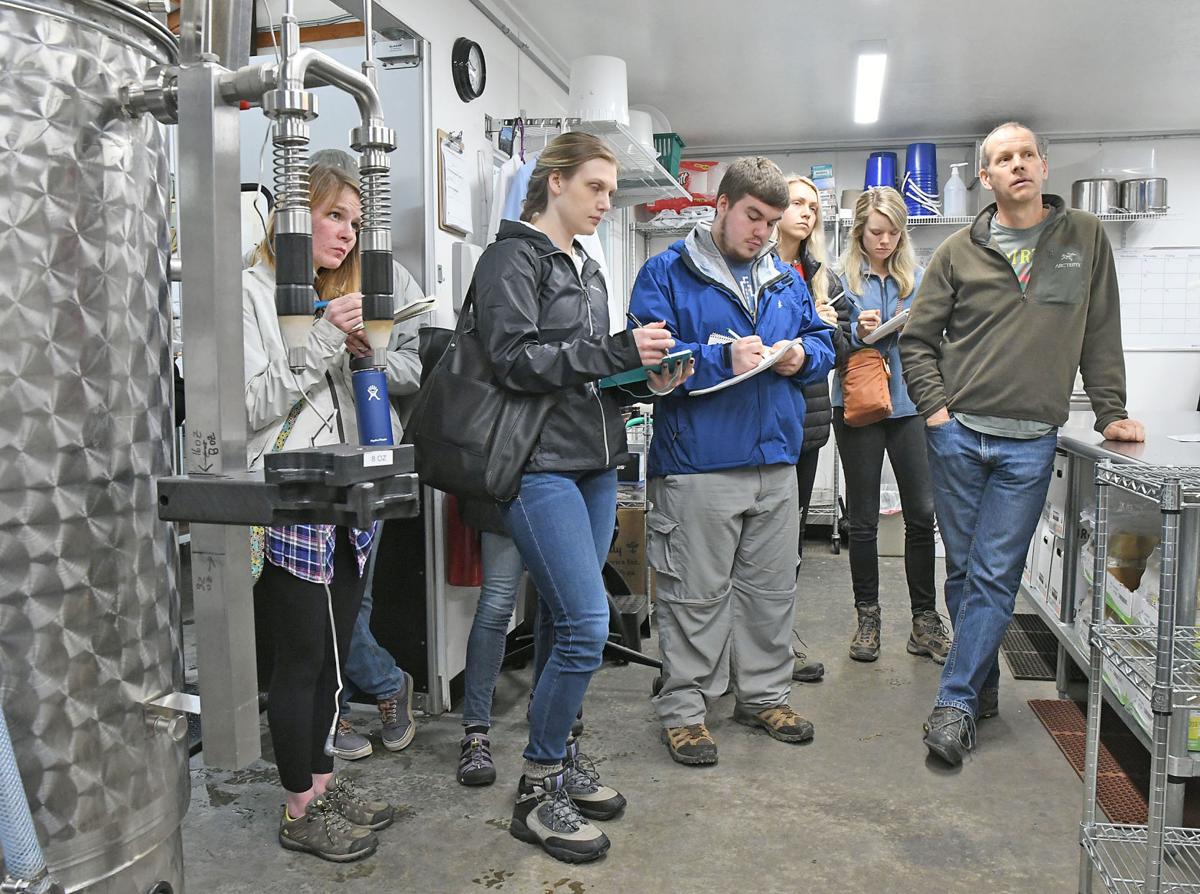 University of Kentucky students check out the processing room at Bow Hill Blueberries during a tour of the farm on Monday, March 12. Scott Terrell / Skagit Valley Herald

Harley Soltes of Bow Hill Blueberries explains the attributes of the blueberry varieties during a tour of the farm on Monday, March 12. Scott Terrell / Skagit Valley Herald

University of Kentucky students check out the processing room at Bow Hill Blueberries during a tour of the farm on Monday, March 12. Scott Terrell / Skagit Valley Herald

Eight University of Kentucky sustainable agriculture students were in Skagit County earlier this month as part of a tour of farms that lead the way in sustainable practices.

Their tour led them to Bow Hill Blueberries, where they learned abut the creative practices powering the 5-acre farm.

When the Soltes family bought the farm in 2011, Harley Soltes said they immediately knew that selling fresh fruit in and of itself couldn't keep the business afloat. Instead, he saw the processing plant on the property as the true value of the farm.

"This has been an experiment in if you can take 5 acres and use value-added to make a sustainable product," Soltes said.

Bow Hill Blueberries' business model is built on the concept of value-added agriculture — when a raw product is processed into something new with enhanced value.

At Bow Hill, that has resulted in a variety of products using blueberries: juice, dressing, jam, ice cream and more.

They use every piece of the fruit, said Harley's wife Susan Soltes, including turning the skins left behind after juicing into a nutrient-packed powder that can be added to smoothies and meals.

Harley Soltes said the farm's products are more flavorful and nutritious thanks to the heirloom plants inherited from the original owners. Some of those plants are more than 70 years old.

The heirloom berries possess more antioxidants than newer varieties, press into juice better and have a thicker skin that makes them easier to process, Susan Soltes said.

This comes in handy for one of the farm's specialties — pickled blueberries.

"Nobody else could do this because you need heirloom fruit," Susan Soltes said. "You try to do this without heirloom fruit and it's complete mush."

Each of the four heirloom varieties at Bow Hill has a slightly different flavor that lends itself to a particular product.

Harley Soltes said the farm markets to customers who will pay more for a product to know where it came from and how it was made.

"The customers who come in here and actually buy our products — they get this is where they want to put their money and their value," Harley Soltes said.

Mark Williams, the University of Kentucky professor who brought his students to the farm, said he chose Bow Hill Blueberries because its model seems accessible to young people going into farming and because the farm has developed a successful marketing technique.

"What's so awesome about Bow Hill Blueberries is that they are totally aligned with the market," said Andrew Miller, director of business retention and expansion at the Economic Development Alliance of Skagit County. "They understand that people want to be involved in the food story. They're able to provide that in a way that's authentic, and people really resonate with that."

All the berries at Bow Hill are grown organically and handpicked on the farm's 5 acres each summer.

"We value add to make this farm sustainable," Susan Soltes said while providing samples of blueberry juice and jam. "We had no idea we were going to do all this when we started."

Susan Soltes said she enjoys sharing the farm's sweet and savory products with guests. People are encouraged to tour the farm, and a walking tour is set up during the Skagit Valley Festival of Family Farms.

"We have a crop that makes people happy. Everybody gets excited when the berries are coming up, and we do too," Susan Soltes said.

The majority of the summer harvest is frozen, which allows the farm to continue to produce juice and other products throughout the year.

For the past eight years, Harley Soltes said new products have  been added almost every year. Next up is experimenting with fermented vinegars and probiotic drinks.

Moving forward, Harley Soltes said they are looking to expand the processing side of the business. The farm has reached capacity as far as land goes, he said, but he is hoping to buy heirloom berries from other farms to add to Bow Hill's products.

"Now is the heyday to be a small, organic, sustainable farm," Harley Soltes said. "It wasn't always a viable idea, but now people will pay for that."