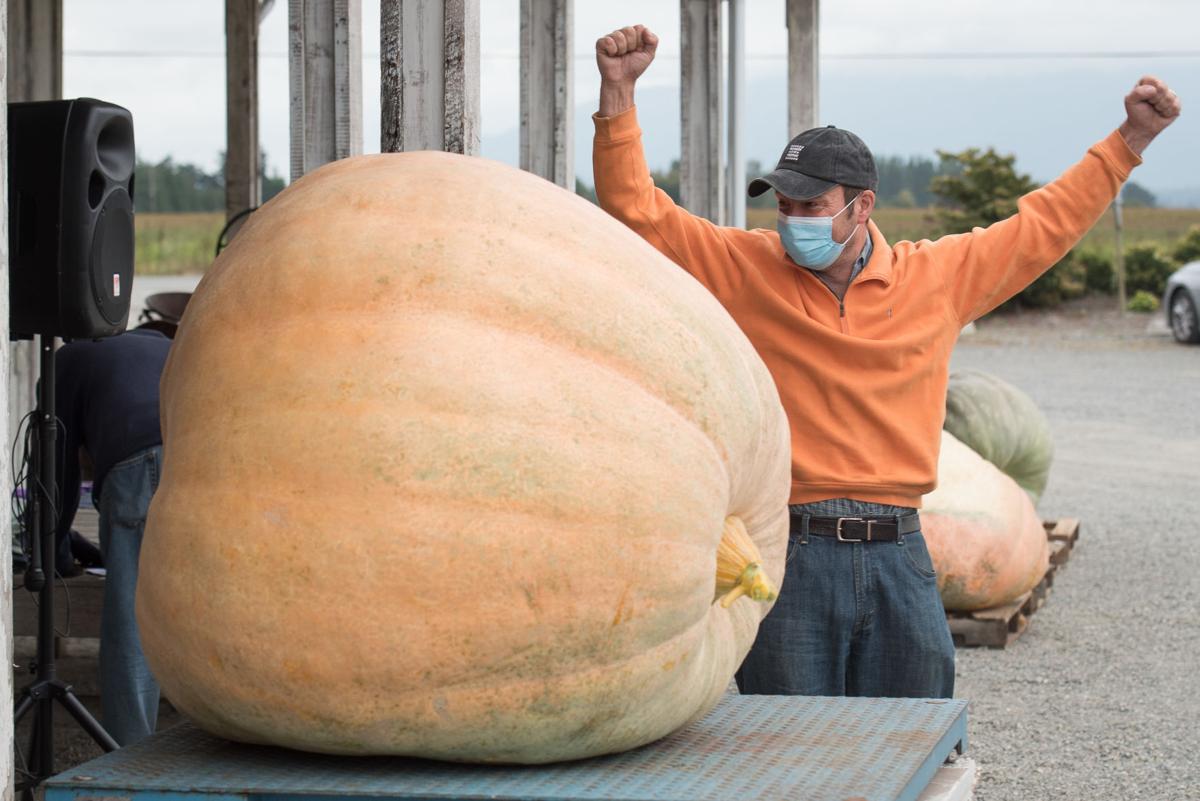 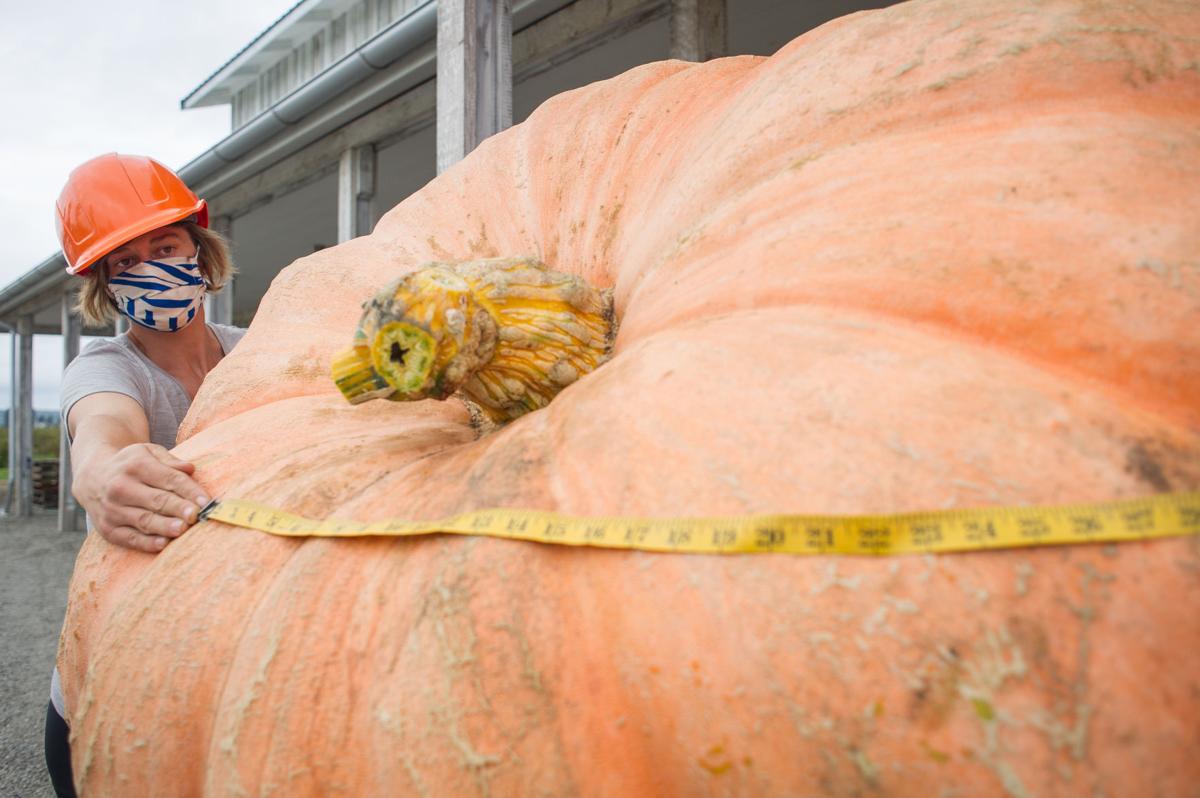 Lily Hirdler, an employee of Christianson's Nursery, measures a pumpkin Saturday during the 10th Annual Skagit Valley Giant Pumpkin Weigh-Off. Pumpkins are measured and examined for any punctures or rotting before being weighed. 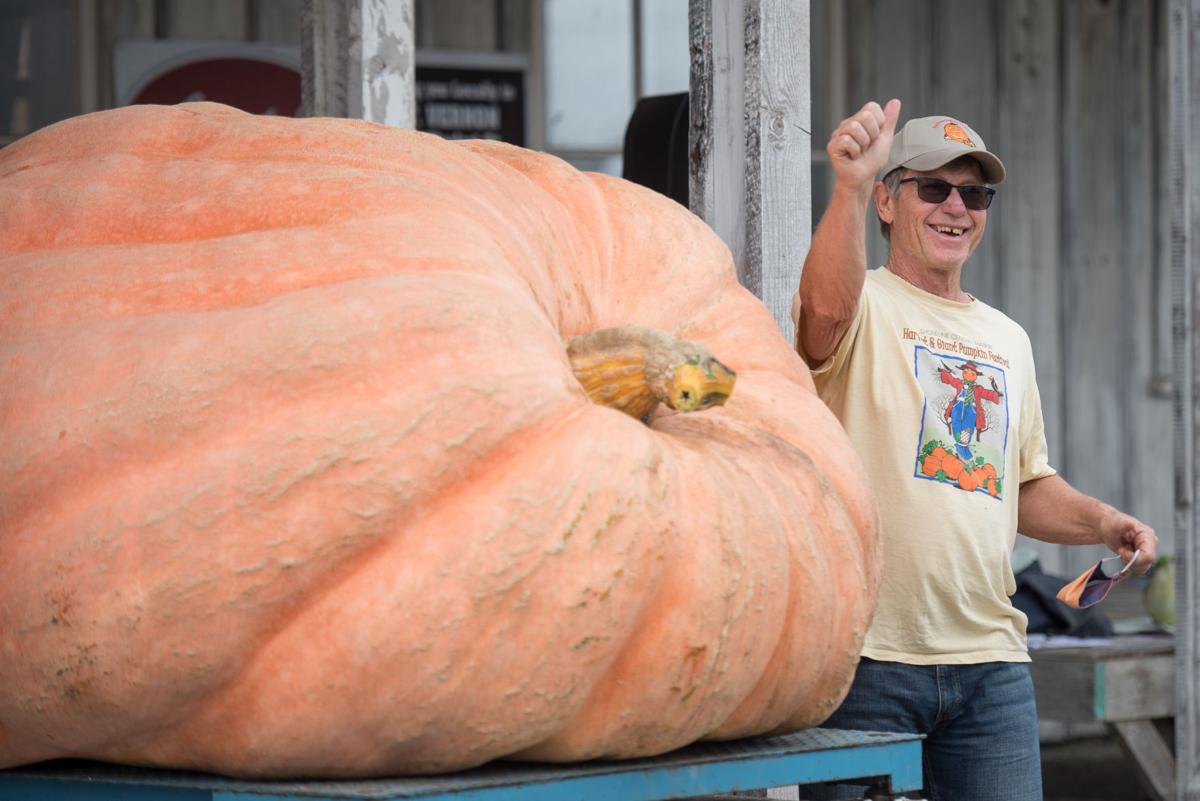 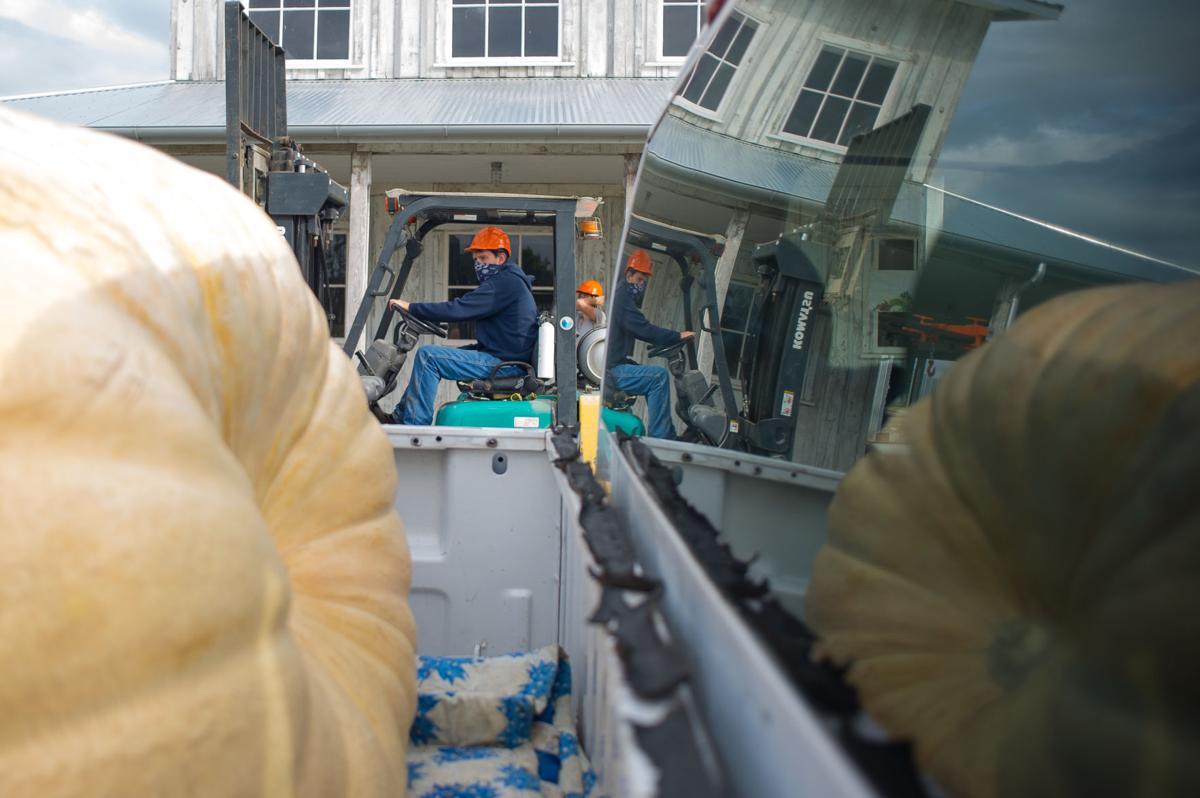 A forklift is driven to the back of a truck Saturday before lifting a pumpkin at the 10th Annual Skagit Valley Giant Pumpkin Weigh-Off at Christianson's Nursery. 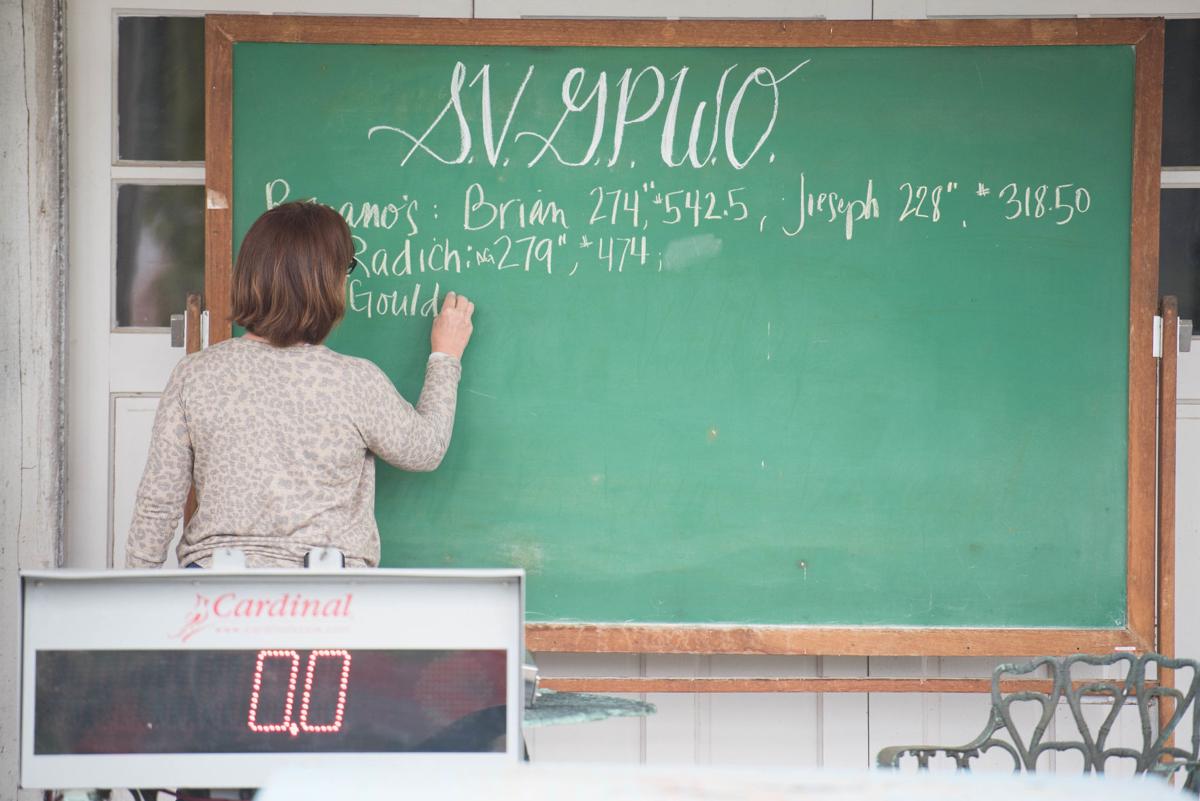 Measurements and weights of pumpkins are written on a chalkboard Saturday during the 10th Annual Skagit Valley Giant Pumpkin Weigh-Off at Christianson's Nursery.

Lily Hirdler, an employee of Christianson's Nursery, measures a pumpkin Saturday during the 10th Annual Skagit Valley Giant Pumpkin Weigh-Off. Pumpkins are measured and examined for any punctures or rotting before being weighed.

A forklift is driven to the back of a truck Saturday before lifting a pumpkin at the 10th Annual Skagit Valley Giant Pumpkin Weigh-Off at Christianson's Nursery.

Measurements and weights of pumpkins are written on a chalkboard Saturday during the 10th Annual Skagit Valley Giant Pumpkin Weigh-Off at Christianson's Nursery.

As he watched his giant pumpkin get lowered onto the scale Saturday, William Beauchere said he hoped for at least 600 pounds.

At last year’s Skagit Valley Giant Pumpkin Festival — his first experience growing a giant pumpkin — his entry clocked in at a measly 199 pounds. He finished 19th out of 21 competitors.

“I made every mistake in the world,” he said.

A year of studying how to grow a better giant pumpkin paid off.

On Saturday, his pumpkin weighed 959 pounds.

Beauchere placed second out of nine who entered giant pumpkins at the Skagit Valley Giant Pumpkin Weigh-Off at Christianson’s Nursery west of Mount Vernon. (The festival was canceled this year and the event limited to growers and their families due to COVID-19.)

Beauchere, of Mill Creek, credited the improvement to watching YouTube videos by pumpkin growers and an educational DVD by fellow competitor Joel Holland.

Giant pumpkins are finicky and require special growing conditions, from the right nutrients in the soil to the temperature of the water, according to growers.

“I became a student of nitrogen, fertilizer and keeping water warm,” Beauchere said.

He also gave the pumpkin more space to grow and buried its vines with dirt — a tip multiple growers mentioned helps the pumpkin root into the soil and take up more nutrients.

Holland took first place with a 1,934-pound giant pumpkin — the second largest he has grown since he took up the hobby more than 40 years ago. His largest pumpkin weighed 2,363 pounds, and he has won two world championship weigh-offs.

Holland helps new giant pumpkin growers get started by providing information on his website such as a fertilizer schedule, and includes seeds with purchase of his DVD.

He said the seeds are harvested from previous giant pumpkins.

“It’s just a challenge,” he said. “I enjoy gardening and it’s the ultimate example of growing a giant vegetable. It opened up a lot of opportunities. I’ve made a lot of friends over the year who grow giant pumpkins.”

Holland’s pumpkin on Saturday was the largest ever recorded at Christianson’s Nursery, an official weigh-off site of The Great Pumpkin Commonwealth. As the first-place finisher, Holland will receive $1,500.

Stephanie Banaszak, marketing, public relations and events manager for Christianson’s, said the pool of competitors was smaller this year due to COVID-19. About a dozen entered giant pumpkins and other giant vegetables, about half as many as usual.

Many other weigh-offs were canceled this year.

Banaszak said even without the several thousands who visit the festival, the nursery moved forward with the event to give growers a chance to record the weights of their pumpkins, and to allow event sponsors to showcase giant pumpkins at their businesses.

The top three giant pumpkins will be on display at Gordon Skagit Farms, Coastal Farm & Ranch and the Skagit Valley Food Co-op.

The third-place finisher was Dick Kilburn with an 810-pound pumpkin.

Several growers said they didn’t do as well this year because of the weather.

“We had a really cool spring with lots of rain, so pumpkins got a late start,” said Matt Radach of Camano Island, who entered two pumpkins. His largest weighed 649 pounds and won fourth place.

Grower Joan DeVries of Mount Vernon placed eighth with her giant pumpkin, which weighed 371 pounds — less than half the weight of her pumpkin last year.

DeVries said she grows giant pumpkins for fun and to set personal records.

“It’s a great community around pumpkin growers,” she said.