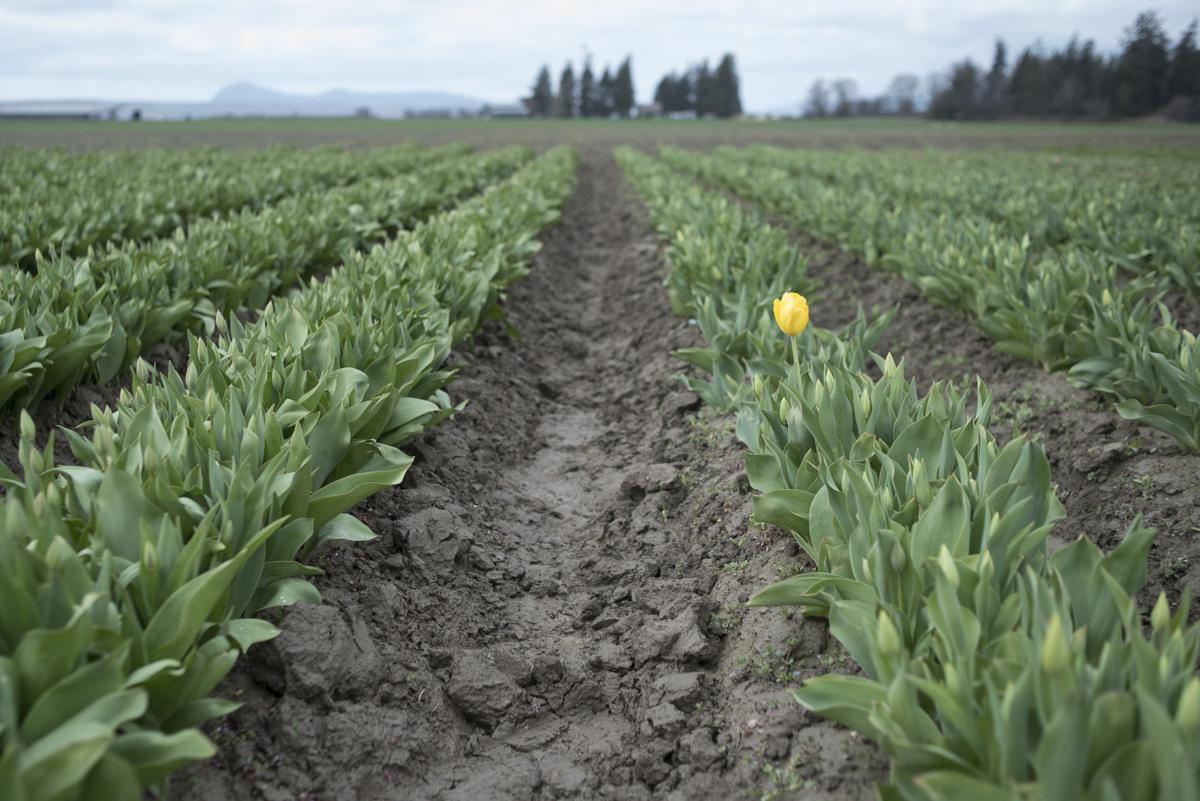 A lone tulip blooms before the rest of the field at Tulip Town on Friday west of Mount Vernon. 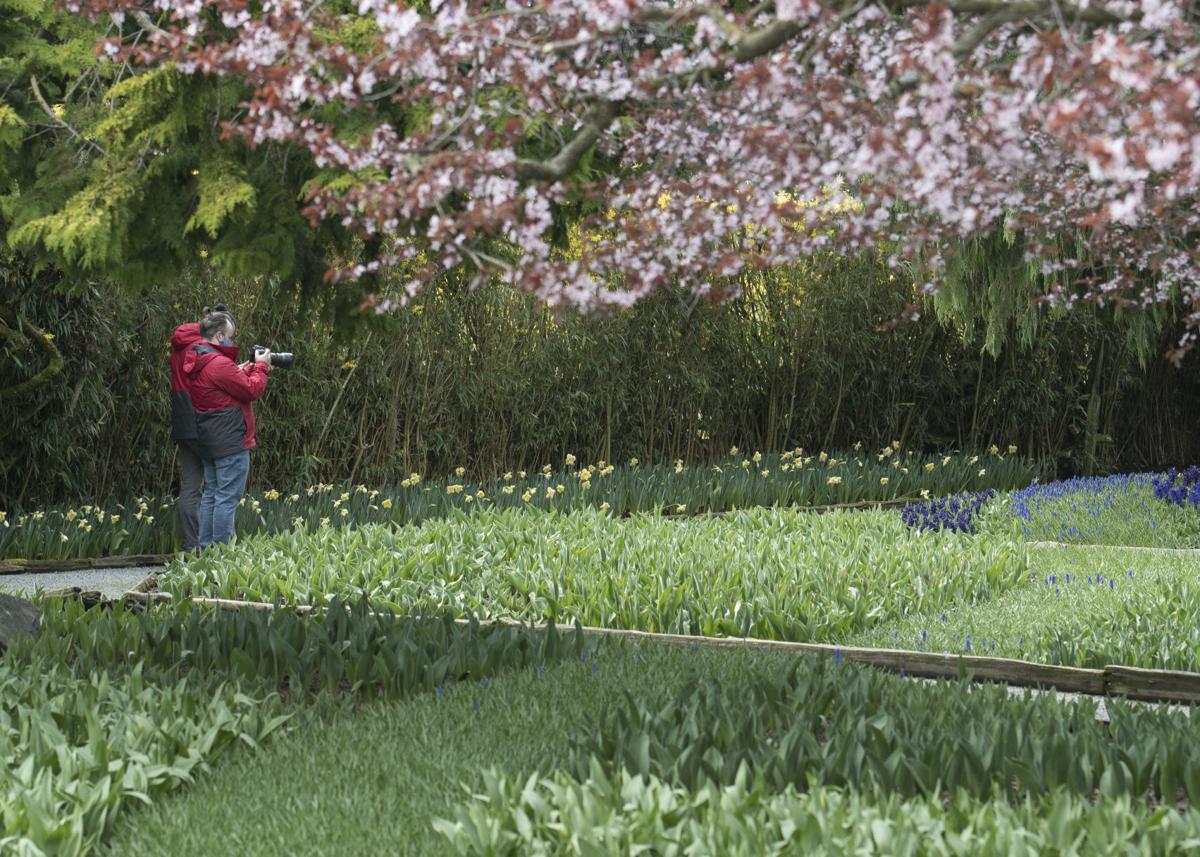 Photographers enjoy the display garden at RoozenGaarde on Friday west of Mount Vernon, days before the Tulip Festival kicks off. 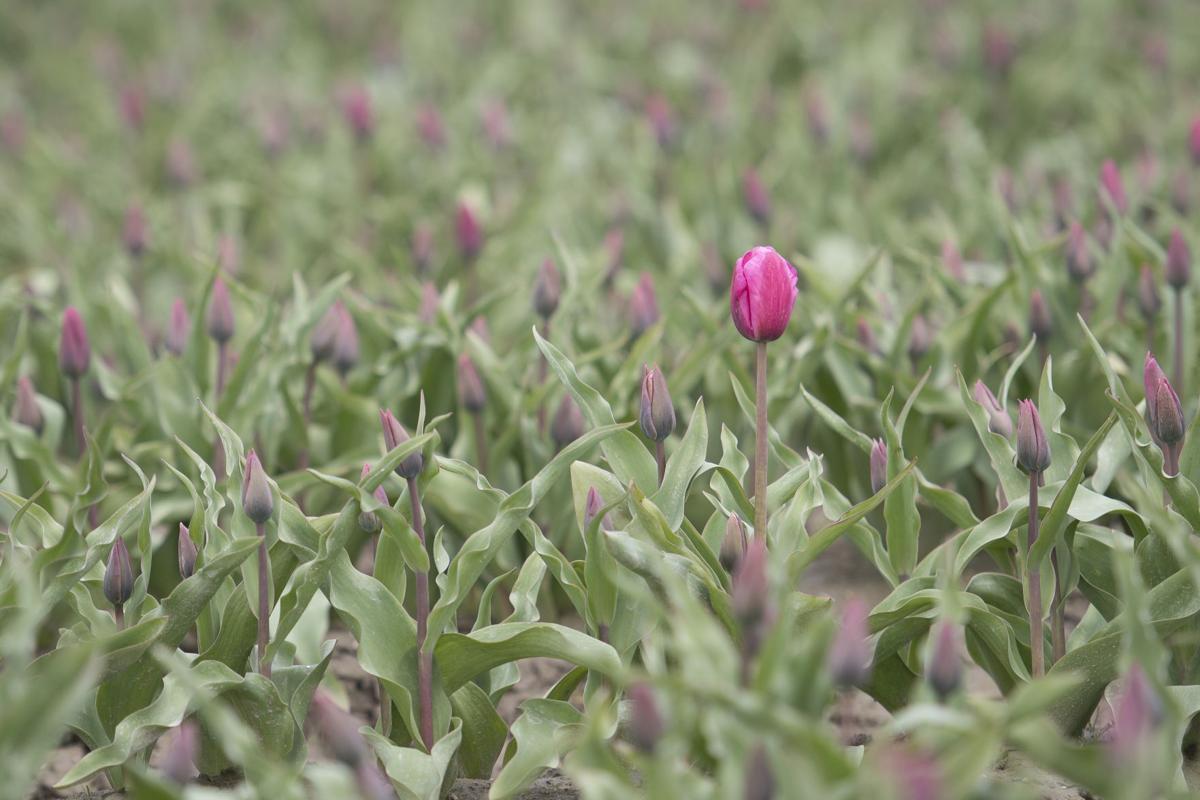 A lone tulip blooms before the rest of the field at RoozenGaarde on Friday west of Mount Vernon. Last year’s COVID-19 shutdown during peak tulip season cost the business nearly a year’s worth of income. 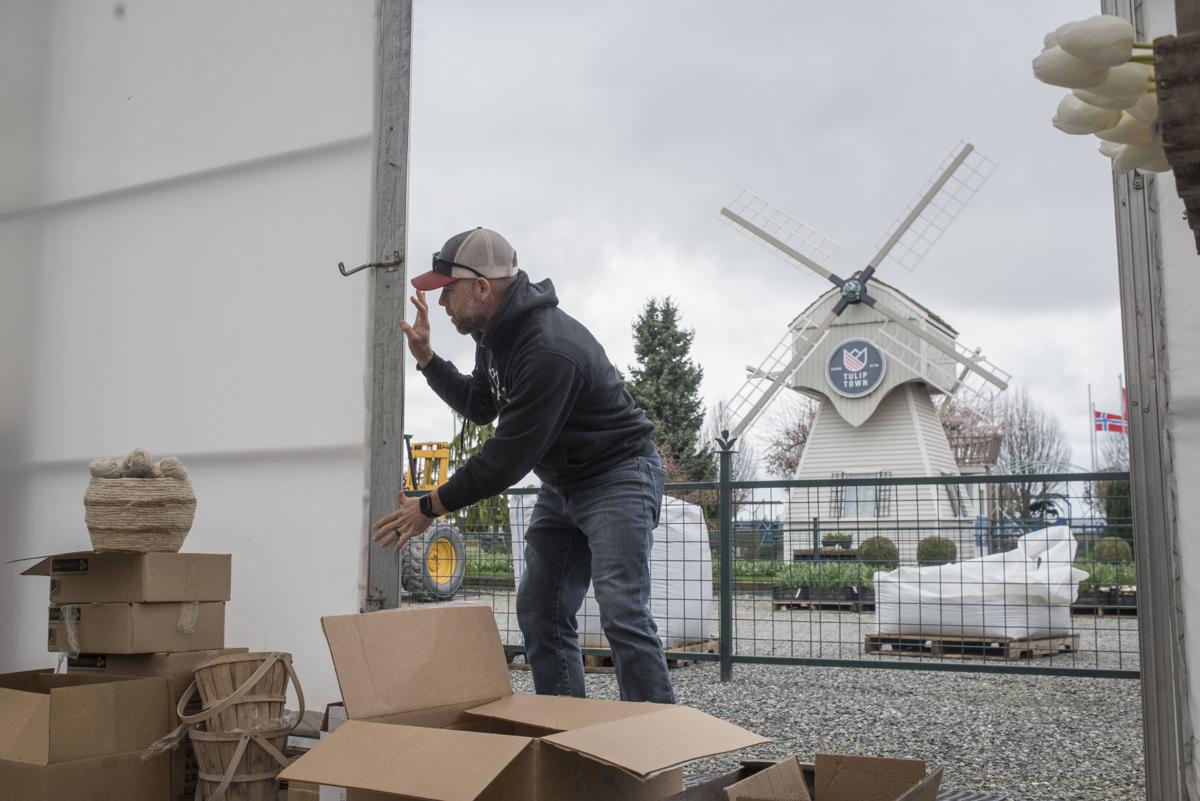 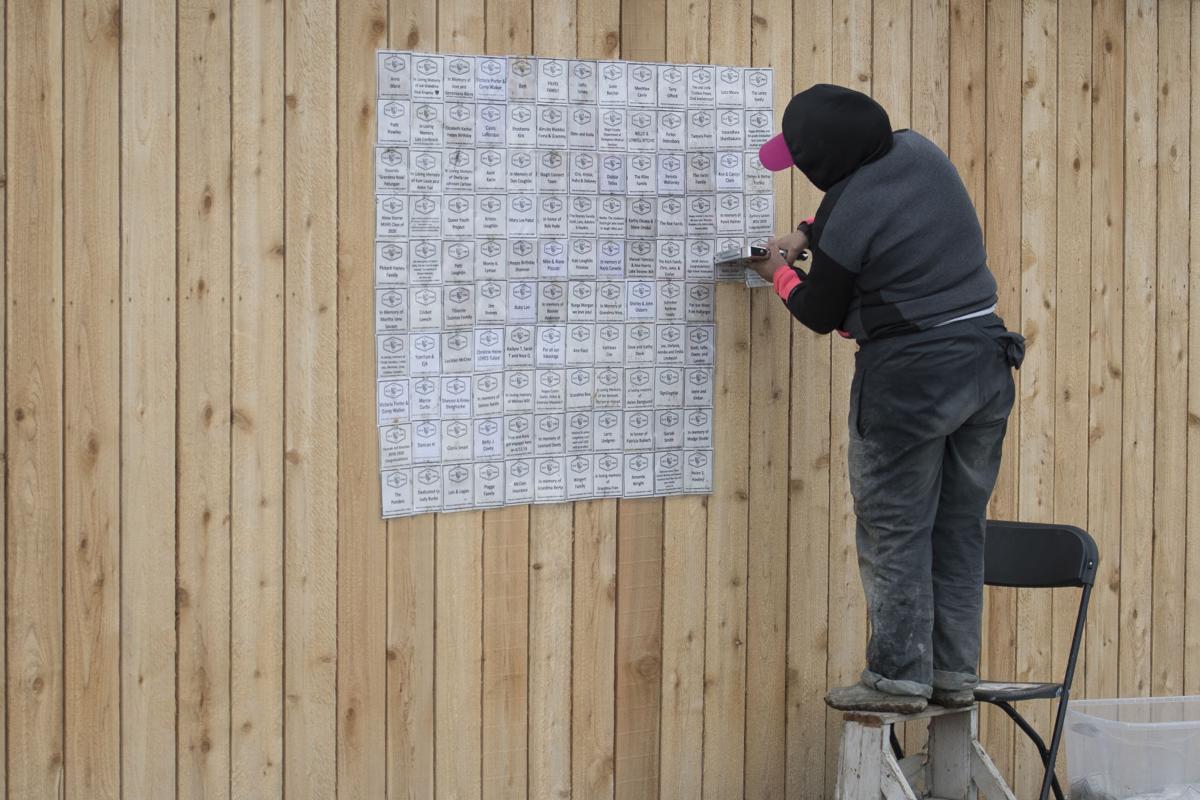 A worker at Tulip Town hangs up name tags from the 'What's at Stake' gallery on Friday west of Mount Vernon. Last year, with in-person attendance prohibited, Tulip Town gave people the option to purchase a laminated name tag that would be staked in the ground and photographed among the tulips. 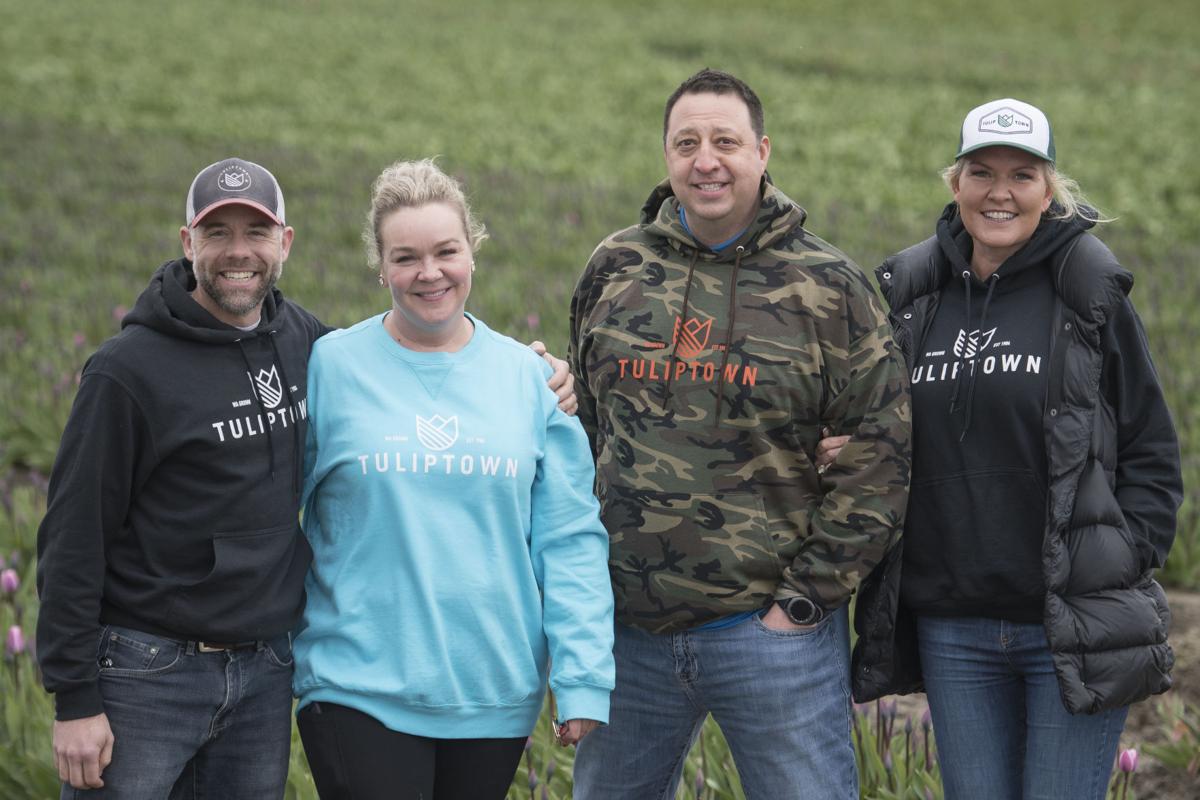 From left, Tulip Town co-owners Andrew Miller, Angela Speer, Donnie Keltz and Rachel Ward pose for a portrait at the farm on Friday west of Mount Vernon. (Not pictured: Randy Howard.) The group of five Skagit Valley natives purchased the farm from its original owners in 2019. 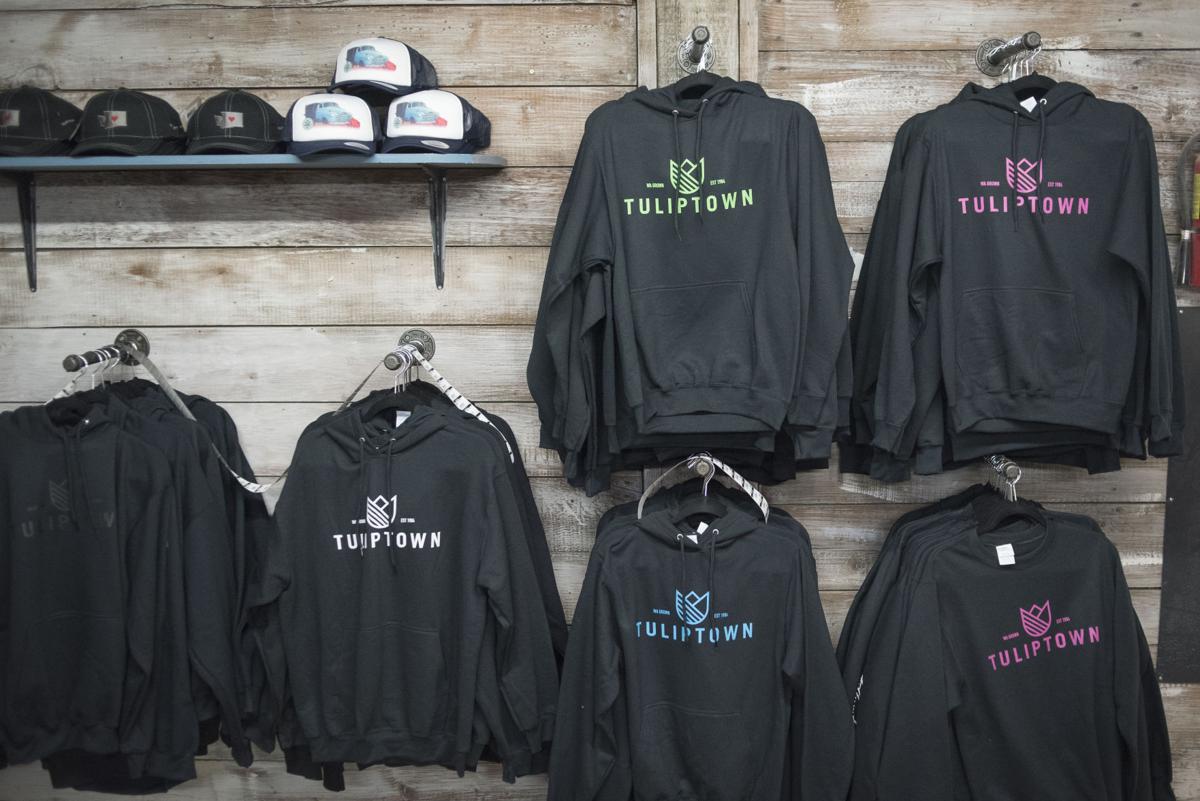 Branded apparel lines the wall of the gift shop at Tulip Town on Friday west of Mount Vernon.

Photographers enjoy the display garden at RoozenGaarde on Friday west of Mount Vernon, days before the Tulip Festival kicks off.

Branded apparel lines the wall of the gift shop at Tulip Town on Friday west of Mount Vernon.

As the COVID-19 pandemic ramped up locally a year ago, the family that owns RoozenGaarde and Washington Bulb Co. found itself with millions of flowers without buyers at the height of tulip season.

Many flowers were donated, but many more were turned to compost. And the family had a serious discussion about the future of their 70-year-old business.

Meanwhile, the new owners of Tulip Town suddenly found themselves facing a similar challenge but from a different perspective — how to make their $1.5 million investment survive a tulip season without people when visitors have traditionally been the farm's biggest source of income.

Now one year later, both farms have endured and adjusted their expectations as the pandemic continues. This year, there will be visitors during the monthlong Skagit Valley Tulip Festival that starts April 1. But it won't look quite like years past. The popular festival draws about 400,000 people annually.

On Friday, the tulip rows were still mostly green at RoozenGaarde and Tulip Town with a few brightly colored tulips daring to bloom before the festival's April start.

In the coming weeks, as the rows show more color, both farms will invite visitors in again, but with reservations and tickets to limit capacity and meet COVID-19 safety guidelines.

By the numbers: Tulips in Skagit County

— About 1,000 acres of tulips and daffodils are grown in Skagit County, sold for both cut flowers and bulbs and shipped throughout the U.S. and Canada. About 20 million bulbs are harvested each summer.

— About 500 acres of tulips are grown in Skagit County, accounting for 75% of U.S. commercial production.

— 75 million cut flowers, grown in greenhouses and fields, account for more than half of overall sales.

— The bulb industry brings in about $20 million in annual gross income, $3 million of which is bulb sales.

— Washington Bulb Co. and Tulip Town are the only bulb-growing farms left in the region.

— The Skagit Valley Tulip Festival in April brings in an estimated 400,000 visitors annually and $65 million in revenue to the county.

“The garden had never looked nicer, the weather was everything we ever dreamed of, and it was an empty garden day after day,” he said.

The closure cost RoozenGaarde nearly a year's worth of income. The business earns about 90% of revenue in April from admissions, gift shop, and flower and bulb sales.

"The spring is what really hit us, and once that was lost, it was lost for the year," Roozen said.

The pandemic also affected the Roozen family's other business, Washington Bulb Co., a commercial grower of bulbs and flowers. The farm has 500 acres of daffodils, 350 acres of tulips and 15 acres of greenhouses. It is the largest tulip and daffodil bulb producer in the U.S.

Roozen said the company last spring lost nearly a month's worth of fresh-cut flower sales from Easter through Mother's Day, its busiest season.

With no market for its perishable product, Washington Bulb Co. donated tens of thousands of flowers to hospitals and first responders. Ultimately, it had to compost millions of flowers, Roozen said.

The situation was grim.

“In March of last year, there was a discussion whether we would move forward with this year,” Roozen said.

Fortunately, demand increased for fresh-cut flowers later in the spring.

"(Flower sales) returned to normal once everyone realized they were staying at home or couldn't visit people,” Roozen said.

Bulb sales have been strong, if not better, this year, he said.

Washington Bulb Co. and RoozenGaarde employ about 250 to 300 workers, he said. The company received a Paycheck Protection Program (PPP) loan to keep employees working to harvest bulbs in early June.

“(That) gave us some breathing room,” he said.

In an effort to scale back, the farm planted fewer acres of tulips and daffodils this season, Roozen said.

Surviving a year of a pandemic has put things in perspective for the business.

"Even your worst days aren’t as bad anymore," Roozen said. "Being in farming, you experience a lot of things out of your control, but we never, like most people, anticipated anything like (the pandemic) happening.”

RoozenGaarde is looking forward to reopening at reduced capacity for tulip visitors this week, he said.

The hope is that guests space themselves out throughout the week and month of April, and that cool spring weather extends the season into early May.

"It's going to be extra special because we won't be sitting by ourselves," he said.

To buy tickets to see tulips at RoozenGaarde, visit tulips.com.

After making a $1.5 million investment in Tulip Town, the company had to survive a tulip season without people — its biggest source of income.

Tulip Town earns about 95% of its revenue from visitors who pass through its gate, said Spinach Bus Ventures CEO Andrew Miller.

"We had to make that up in other ways," he said.

“That was just enough to barely keep our nose above water,” Miller said. “We were in a survive, not thrive (mode).”

Tulip Town also launched a 360-degree mobile phone app to give viewers at home an immersive view of the tulip fields.

“Our innovation muscles got really, really big, and so did our compassion muscles,” Miller said. “That’s what surprised me the most, is how much we were able to connect people with tulips.”

He said the pandemic underscored how many have a personal connection to tulips, even from a distance.

Miller said with COVID-19 restrictions relaxed this year, the farm is pivoting back to what it does best — connecting people with tulips in-person.

“Commercially and economically, it’s vital we have a good year, and at the same time, it’s like this collision of energy and collective healing (after COVID-19),” he said.

The owners have incorporated aspects of their other businesses into Tulip Town. In addition to a gift shop with Tulip Town merchandise, there is a second retail area with Fairhaven Mill flour and other Skagit Valley-made products.

A new cafe will serve Pacific Northwest-themed food from the Skagit Landing menu, and local beer, wine and cider. There is an indoor seating area and an outdoor patio that looks out over tulip fields.

Tulip bulbs in the ground for 2021 festival

The owners have also tried to move Tulip Town into the digital age.

At the entrance gate, a touchless scanner will scan tickets with a QR code. Visitors will be able to browse for tulip bulbs on tablets. In the tulip fields, signs will display QR codes for each tulip variety. Scanning the code with a mobile phone will take guests to Tulip Town's website to purchase the corresponding bulb.

“(Opening) is huge for us as a team and huge for us individually,” Miller said. “It feels like we’ve been at this for two years without really being able to celebrate.”