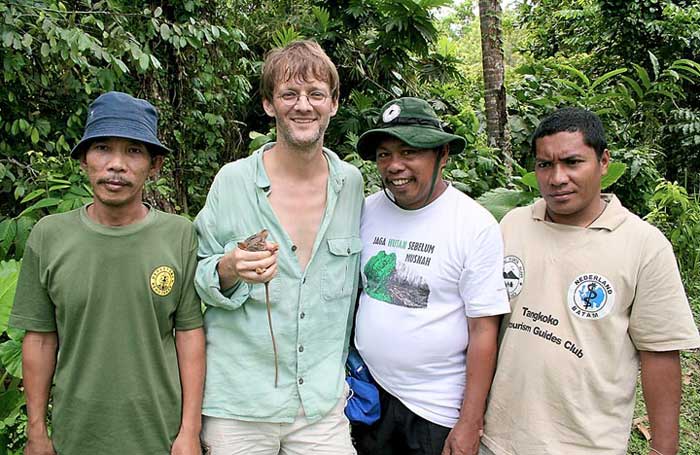 This research team discovered a species of tarsier, which Myron Shekelle holds in his hand in 2005 on Siau Island, Indonesia. From left are Johnny Lengkei of the Indonesia Department of Forestry; Shekelle, who worked for the University of Indonesia Center for Biodiversity and Conservation Studies; Yunus Masala, also of the forestry department; and Erdenipan Tundu, of the Tangkoko Ecotourism Guides Club. 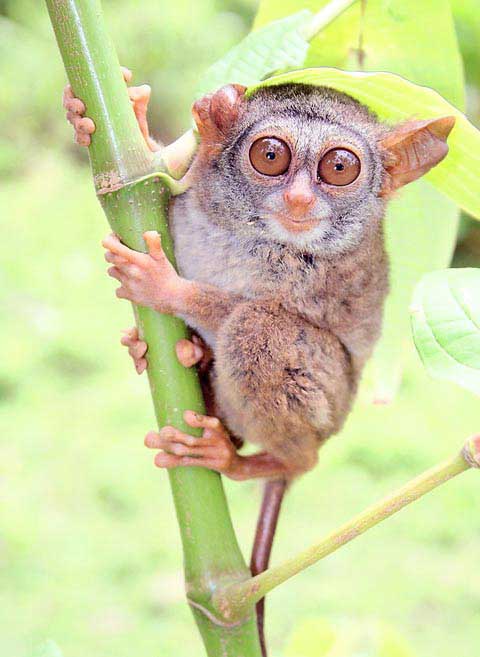 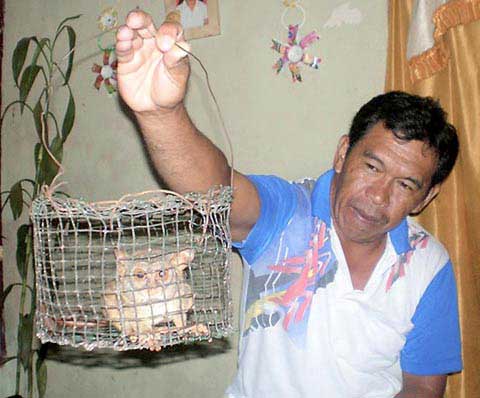 This research team discovered a species of tarsier, which Myron Shekelle holds in his hand in 2005 on Siau Island, Indonesia. From left are Johnny Lengkei of the Indonesia Department of Forestry; Shekelle, who worked for the University of Indonesia Center for Biodiversity and Conservation Studies; Yunus Masala, also of the forestry department; and Erdenipan Tundu, of the Tangkoko Ecotourism Guides Club.

In the humid forests on Siau Island in Indonesia, anthropologist Myron Shekelle and his small team of researchers trekked through the brush and trees in search of an undiscovered species.

Shekelle had predicted they would find a new species of tarsier — a small primate that lives in trees. He was so confident, in fact, that he invited a television film crew to accompany his expedition in 2005.

Until that point, only the people who lived on Siau had seen tarsiers there.

Shekelle’s team spied two tarsiers in the trees. Capturing them could be challenging because tarsiers can leap distances of up to 16 feet.

Suddenly one dropped to the ground about six feet from Shekelle.

“I leapt out among the branches and shrubs and dry twigs, and I came up with the tarsier,” Shekelle said.

He held in his hands what would be called Tarsius tumpara, after the name used by Siau residents for the tarsiers.

One of humans beings’ oldest cousins, the nocturnal tarsiers have huge eyes and mobile ears and resemble Yoda, the “Star Wars” movie character. Their long toes have toenails and their fingers, which grip branches, have fingernails.

“When you actually hold one and see a wild one, the first thing you are struck by is how human their hand is,” Shekelle said.

In 2008, Shekelle, who now lives in Burlington, and three other researchers published a paper describing the Tarsius tumpara in the journal Primate Conservation and recommended the rare primate for protection.

The International Union for Conservation of Nature’s Primate Specialist Group listed Tarsius tumpara among the world’s most endangered primates. The announcement was made Feb. 18. Shekelle conducts many workshops because his research is funded primarily through grants. He said it’s important to him to share his research with the public as a way of giving back.

The drive to conserve

Shekelle is involved in assessing species for inclusion on the Primate Specialist Group’s “red list,” which identifies species as under the threat of extinction.

Researchers listed degradation of habitat; the potential of Siau’s volcano, one of the most active volcanoes in Indonesia, to erupt; and the local custom of eating the tarsier — the snack food made of tarsiers is called tola-tola — as the reasons that the Tarsius tumpara is at a high risk of extinction.

Shekelle’s study of the tarsier follows in the footsteps of other well-known anthropologists who studied primates, including Jane Goodall and Dian Fossey, who are world-renowned for their research on chimpanzees and gorillas, respectively.

And like Goodall and Fossey, Shekelle is passionate about saving primates from extinction.

But saving an endangered species can be difficult because scientists ask people in developing countries to stop practices, such as clearing forests, that are needed to feed people and provide jobs, Shekelle said. Asking people to stop clearing land can be seen as holding back progress and a country’s development, he said.

Changing people’s attitudes about endangered species must be a long-term, sustainable process, Shekelle said. But long-term funding is hard to find.

Before Shekelle, 45, studied tarsiers full time, he focused on paleontology.

During his junior year at the University of California, Los Angeles, his advisor wanted him to spend a summer in the field.

His advisor suggested two projects, Shekelle said. The first would involve traveling to the mountains of Sulawesi Island, Indonesia, with a tarsier scientist to try to find a species thought to be extinct.

The second would involve going to Wyoming and assisting on a paleontological dig.

Shekelle said that he wrote grant applications for both projects and received money to go to Wyoming, rather than Indonesia. (Ultimately, the pygmy tarsier was rediscovered in 2008 on Sulawesi by a colleague of Shekelle’s.)

Later, as a graduate student at Washington University in St. Louis, he found paleontology didn’t hold the same appeal it once did. He knew from a three-month trip to Indonesia in 1994 that tarsiers would be an intriguing species to research.

Tarsius tumpara wasn’t Shekelle’s first experience with a new species. On one trip to Indonesia, he traveled 13 hours by boat to Sangihe Island as part of his first systematic field study of tarsiers.

At dawn the day after the team arrived, they heard the sound of tarsiers calling and spread out in the shrubs along the edge of the town.

“As the sun rose and gave a gray light, I looked through the silhouette of the tangled branches and sitting about four meters away was the biggest tarsier I had ever seen in my life, and at that moment I knew I was looking at a different species,” Shekelle said.

It was Tarsius sangirensis, which had been described back in 1897, but had been considered a subspecies of another tarsier species. The other team members agreed it was a separate species.

“That was an exciting morning for a young graduate student, and it made up for passing Christmas on an island that was, at the time, far and away the most remote place I had ever been,” he said.

Shekelle switched his focus in 2003, the year he received his doctorate in anthropology. His postdoctorate work included looking into whether tarsiers with different vocal calls are genetically different and developing a model that would predict where new species could be found.

He has lived in Indonesia or Singapore for a total of 10 of the past 15 years, where he has studied tarsiers in their native environment, as well as teaching as a postdoctoral fellow. He speaks Indonesian, as well as English. Shekelle was a founding member of the Jane Goodall Institute in Singapore.

Shekelle, his wife and their daughters relocated from Singapore, where he had been teaching at the Department of Biological Sciences at the National University of Singapore, to west of Burlington about 18 months ago. Shekelle’s wife is a singer and he plays guitar.

Music is another passion, he said.

They moved to Skagit County to be closer to family, he said. His father lives in San Juan County. Shekelle started Tarsier.org, a science-based conservation, nongovernmental organization.

Later this winter, he will travel overseas to give a series of lectures on global warming in Malaysia as part of the U.S. State Department Bureau of International Information Programs’ Speaker and Specialist Program. The program sends American experts to deliver lectures, work as consultants or conduct seminars overseas.

“I love teaching. I also love doing research on tarsiers,” he said.

Currently, he’s a visiting professor and adjunct curator at Portland State University’s biology department and its Museum of Vertebrate Biology, respectively. He also is working with other researchers on several projects including the impacts that global warning will have on primate conservation and a tarsier conservation plan.

He’s been featured on several television shows, including the Animal Planet series “Nick Baker’s Weird Creatures.” He’s helped camera crews from National Geographic and the BBC find tarsiers. Some of the tarsiers he studies will be featured on the primate episode of the BBC’s new series “Life,” narrated by David Attenborough. “Life” is due for release in America later this year on the Discovery Channel.

“I’ve been very fortunate these past 15 years to get grants ... and funding,” Shekelle said. “The reality is my family has had to make sacrifices.”

Tarsier at a glance

Genus: Tarsius. There are at least nine known species.

Where they’re found: The forests, swamps, and shrublands of Maritime Southeast Asia in the nations of Indonesia, Brunei, Malaysia and the Philippines. Tarsiers have even been found in urban gardens.

Lifespan: Up to 11 years in the wild and 16 in captivity.

Food: Insects, lizards and other live prey, which tarsiers always eat head first. They are the only primate that subsists on only live prey.

Distinctive features: Tarsiers’ enormous eyes allow them to see in the dark. Their eyeballs don’t move in their eye sockets, but their heads swivel 180 degrees in both directions, allowing them to look all around.

Tarsiers can leap up to almost 161⁄2 feet to either catch their food or flee from predators, such as reptiles, feral cats and humans. Besides the ability to see at night, they have a sensitive sense of smell and hearing.

At dawn, tarsiers vocalize in a duet call that varies in different geographic regions. Scientists theorize that different calls are made by different species. If that theory is proven, there could be more species of tarsiers discovered than scientists have identified.

* For information about the BBC series “Life,” which will feature tarsiers studied by Myron Shekelle, now of Burlington, visit www.bbc.co.uk/programmes/b00lbpcy