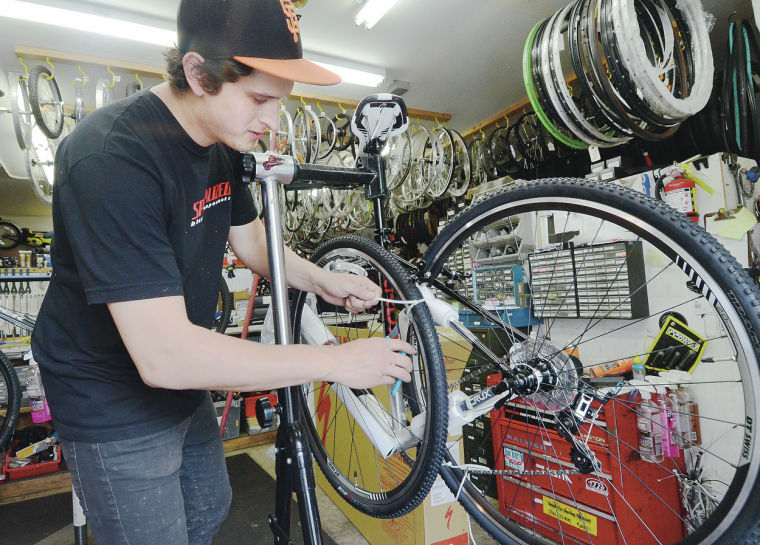 Garrett Critchlow worked on assembling a special order cyclocross bicycle Friday at Skagit Cycle, which lost 30 to 40 percent of sales at a critical time when Interstate 5 was closed. Store owner Gary Santiago said he is unsure what changes to operations may have to be made this year to make up for lost revenue. 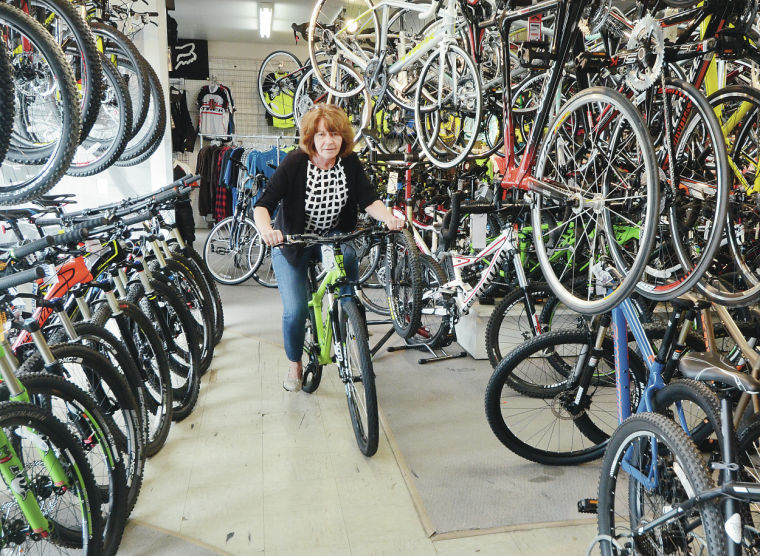 Skagit Cycle customer Sharon Blachurst checks out a trail bike Friday afternoon. She and her husband, David, came down from White Rock, British Columbia, to shop for a new bicycle for Sharon.

Garrett Critchlow worked on assembling a special order cyclocross bicycle Friday at Skagit Cycle, which lost 30 to 40 percent of sales at a critical time when Interstate 5 was closed. Store owner Gary Santiago said he is unsure what changes to operations may have to be made this year to make up for lost revenue.

Skagit Cycle customer Sharon Blachurst checks out a trail bike Friday afternoon. She and her husband, David, came down from White Rock, British Columbia, to shop for a new bicycle for Sharon.

BURLINGTON — After enduring nearly a month of low customer traffic and sales following the collapse of the Skagit River Bridge, businesses along Burlington Boulevard and Riverside Drive in Mount Vernon are returning to normal since the temporary bridge span opened on June 19.

However, the damage inflicted by drops in sales between 15 and 80 percent will likely have a long-term effect on local businesses and employees.

Sales dwindled with the increasingly long lines in front of stores and customers avoiding detour routes for shopping, so some businesses cut back staff hours or laid off employees — and now face an uncertain future.

However, he said he estimates the local economic impact to be in the tens of millions of dollars from low sales, staff reductions and layoffs. Harrison said the city generates $750 million in taxable retail sales per year, the highest rate per capita in Washington. The economy and city government are highly dependent on that money, he said.

“Even if business was down 50 percent, that’s a $30 million hit to our economy.” Harrison said. “That’s substantial.”

Marty Stowell, owner of Stone Forest Kitchen & Bath Center on Burlington Boulevard, said despite moving into the construction and remodeling season, his business was down 65 percent over the three weeks following the bridge collapse.

“It definitely took some wind out our sails. Seeing a drop in revenue and cash flow like that is a kick in the gut,” Stowell said.

He cut back all staff hours, worked extra hours and days alone and laid off one employee to try and minimize losses, he said.

Assistance in the form of a low-interest business loan may be available for affected businesses through the Small Business Administration, but those loans require specific records to qualify, said Kevin Hoult, Certified Business Adviser for the Economic Development Association of Skagit County.

The loans can provide businesses up to $2 million in working capital with terms up to 30 years at an interest rate of 4 percent.

Don Wick, executive director of EDASC, said 11 businesses turned in economic loss worksheets to his office. At least five businesses demonstrating substantial economic losses from the collapse are needed to qualify the area for a formal disaster declaration.

Kevin Wynne, public information officer for the Office of Disaster Assistance, said the worksheets need to be forwarded to the governor’s office. The governor then needs to make a request for a formal disaster area declaration before the SBA can release funds for loans.

Wynne said Monday the SBA office in Sacramento had not yet received such a request. Hoult said the tricky part of receiving a loans, if they are made available, is proving the bridge collapse caused businesses to fail to cover normal operating expenses.

Businesses need to demonstrate through financial records that they were stable before the bridge collapsed and that they had substantially better business during the same period the previous year, Hoult said.

Stowell said he lost $150,000 in revenue during the collapse and will be looking to use a loan if it’s made available.

Alicia Wiseman, manager of Ashley Furniture on Burlington Boulevard, said instead of cutting back staff hours, the parent company of her store responded by increasing advertising.

She said the store experienced losses of 55 percent when the bridge was out, but losses would have been much worse if she hadn’t used a blitz of advertising through print, email and up to five sign-spinners working at a time at nearby street intersections.

“Without the sign-spinners, we’d be down 70 percent. They’re available at a moment’s notice and when people are stuck in traffic, they notice them,” Wiseman said.

Gary Santiago, owner of Skagit Cycle on Burlington Boulevard, said revenue was down 30 to 40 percent from what he saw last year during his biggest season for sales.

“I-5 was routed right in front of our door,” Santiago said. “It was really tough on all the small businesses and big businesses — everything from Costco to the little coffee shops.”

Santiago said he didn’t have to turn to layoffs because he employs a small crew.

However, he said he has been talking to suppliers to see if they can be more flexible on payments for the next few months. He said he will watch sales throughout the summer to see if he will have to change his operations to make up for the lack of business.

Both EDASC and individual cities have released marketing campaigns designed to bring back visitors from Seattle and Vancouver metropolitan areas.

Cities responded immediately after the collapse with campaigns of their own. Harrison said the Burlington City Council authorized $100,000 from the city’s hotel/motel tax fund to provide an ongoing advertising campaign in Vancouver.

Mount Vernon released $25,000 from a similar fund to advertise in Seattle, and Anacortes provided the city chamber of commerce with $10,000 to advertise through the ferry system.

As bad as the bridge closure was to some businesses along the detour route, others — often in the opposite direction — saw some small increases.

Mike Frank, co-owner of the Red Apple in Concrete, said during the bridge closure he saw a few new faces in his store as locals stayed away from Burlington and Mount Vernon to shop.

“I’ve heard people say, ‘No I’m not going to go and get involved in that mess.’ And we’ve seen people who had never been in here before,” Frank said.

Kirsten Young, a massage therapist with an office on Riverside Drive, said four truck drivers became clients of hers during the three-week span when the bridge was out.

Stowell, Santiago, Wiseman and other business owners noted that by the time the temporary bridge was back up, business had largely returned to normal.

Stowell said he hopes the thousands of people formerly stuck in bumper-to-bumper traffic outside his materials store will remember it when preparing for their next home improvement project.

“Maybe people saw us for the first time. Hopefully, with the extra exposure, we might see an upswing,” he said.