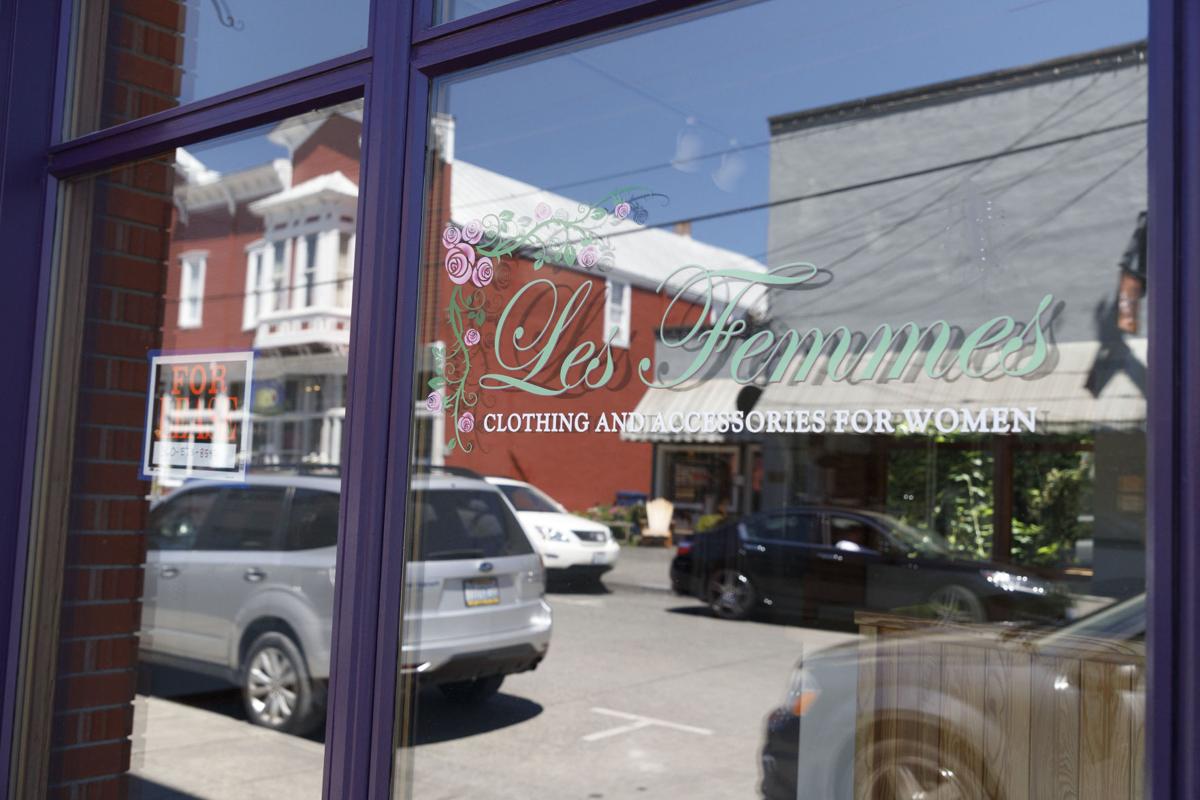 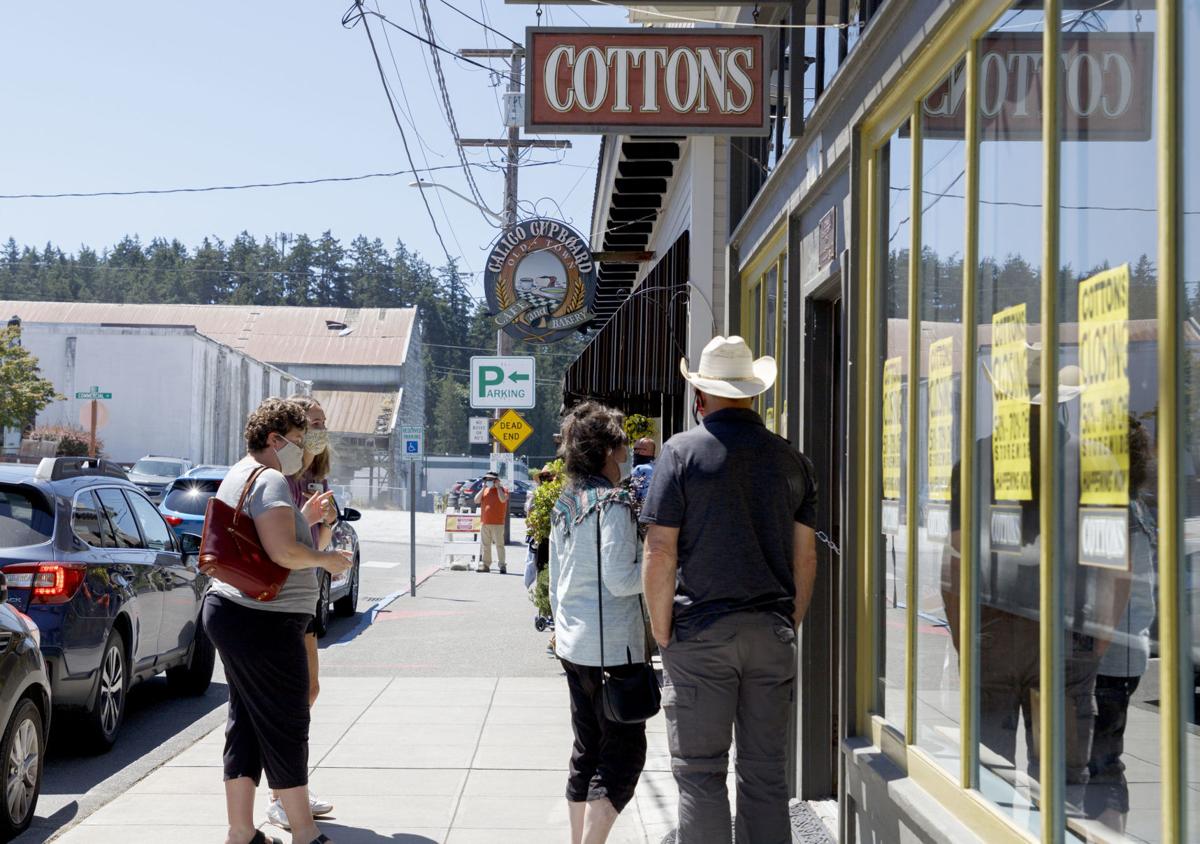 Masked customers wait to go inside Cottons, a clothing store in La Conner, on Saturday afternoon. The store plans to close at the end of August due to challenges from COVID-19. 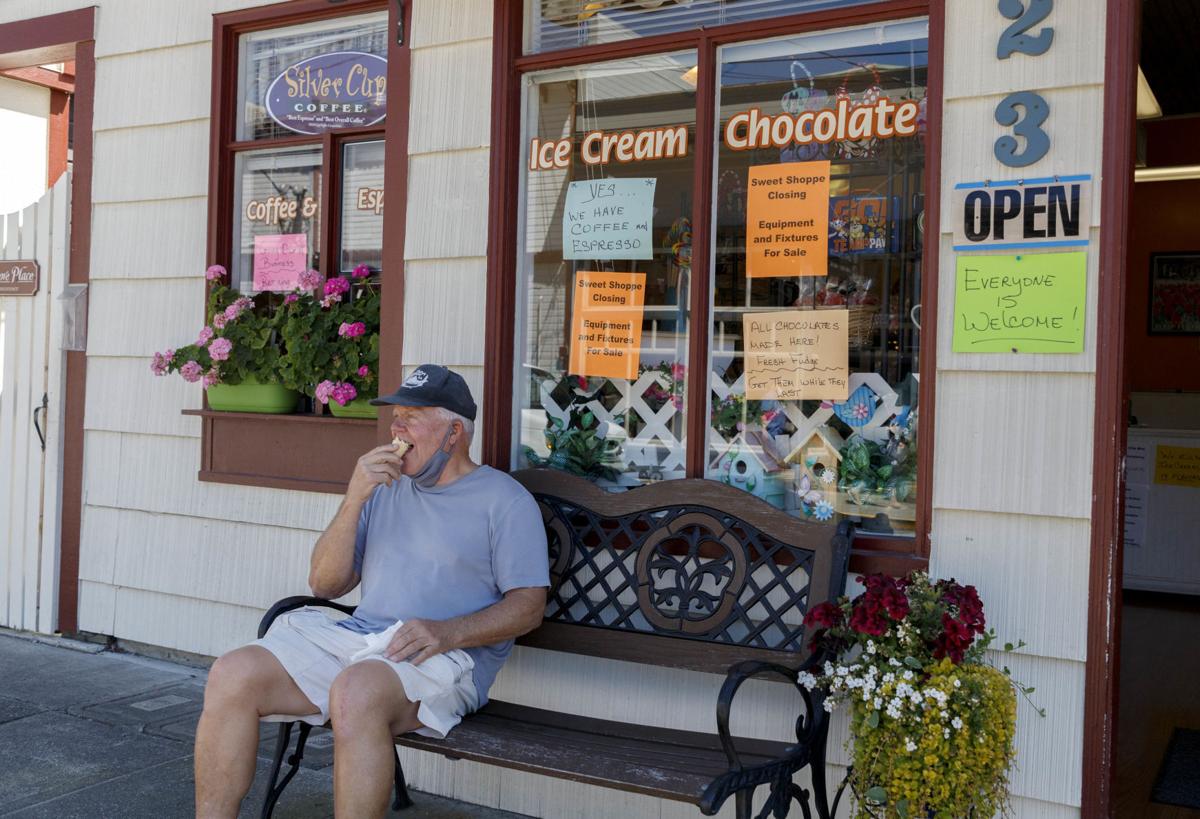 Jim Hemans, of Mukilteo, eats an ice cream cone outside La Conner Sweet Shoppe, which is closing, on Saturday. 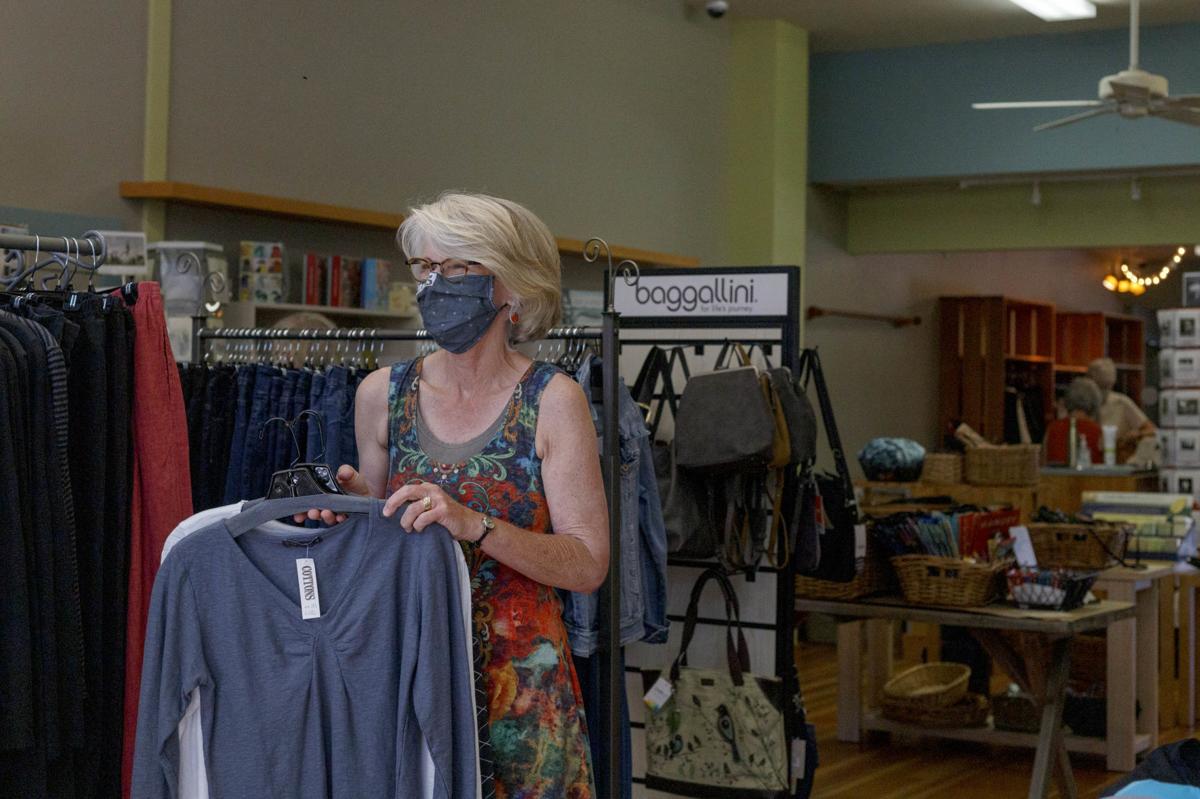 Tia Kurtz, owner of Cottons in La Conner, helps a customer on Saturday. Kurtz said she is closing the store due to too many unknowns surrounding COVID-19 and many employees not feeling comfortable returning to work. 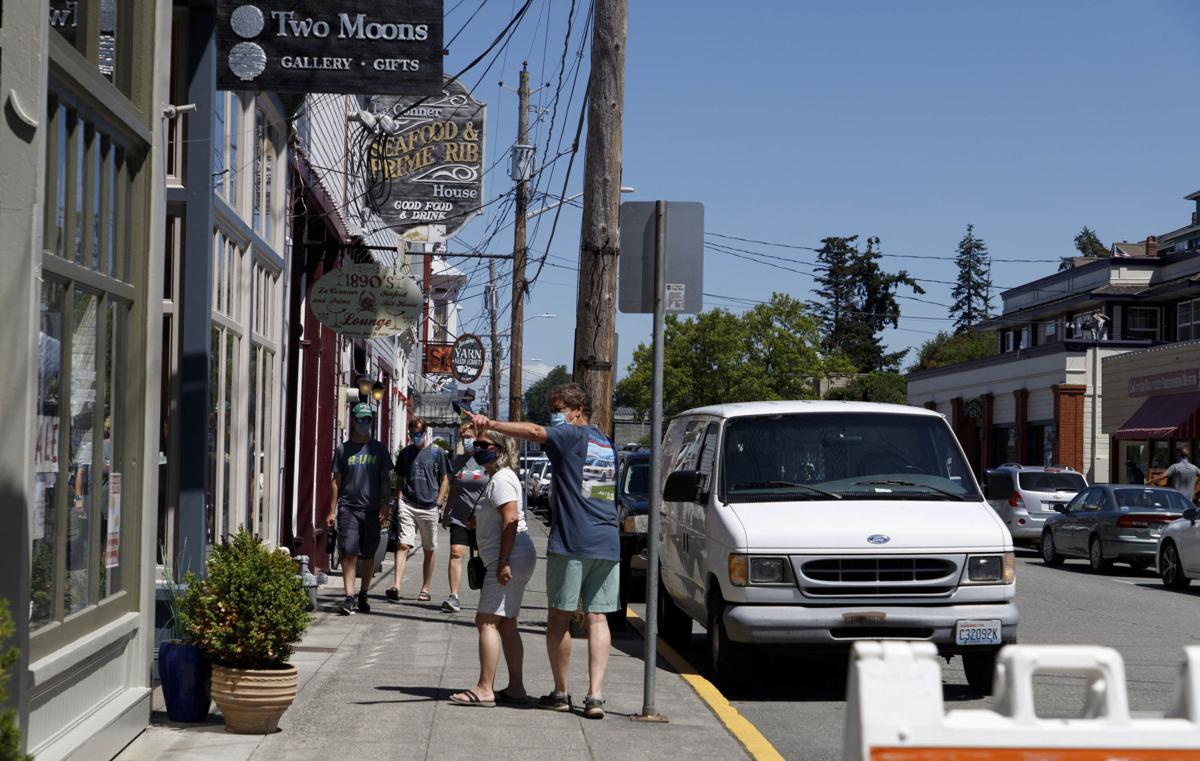 Many shops and businesses in La Conner were busy on Saturday. 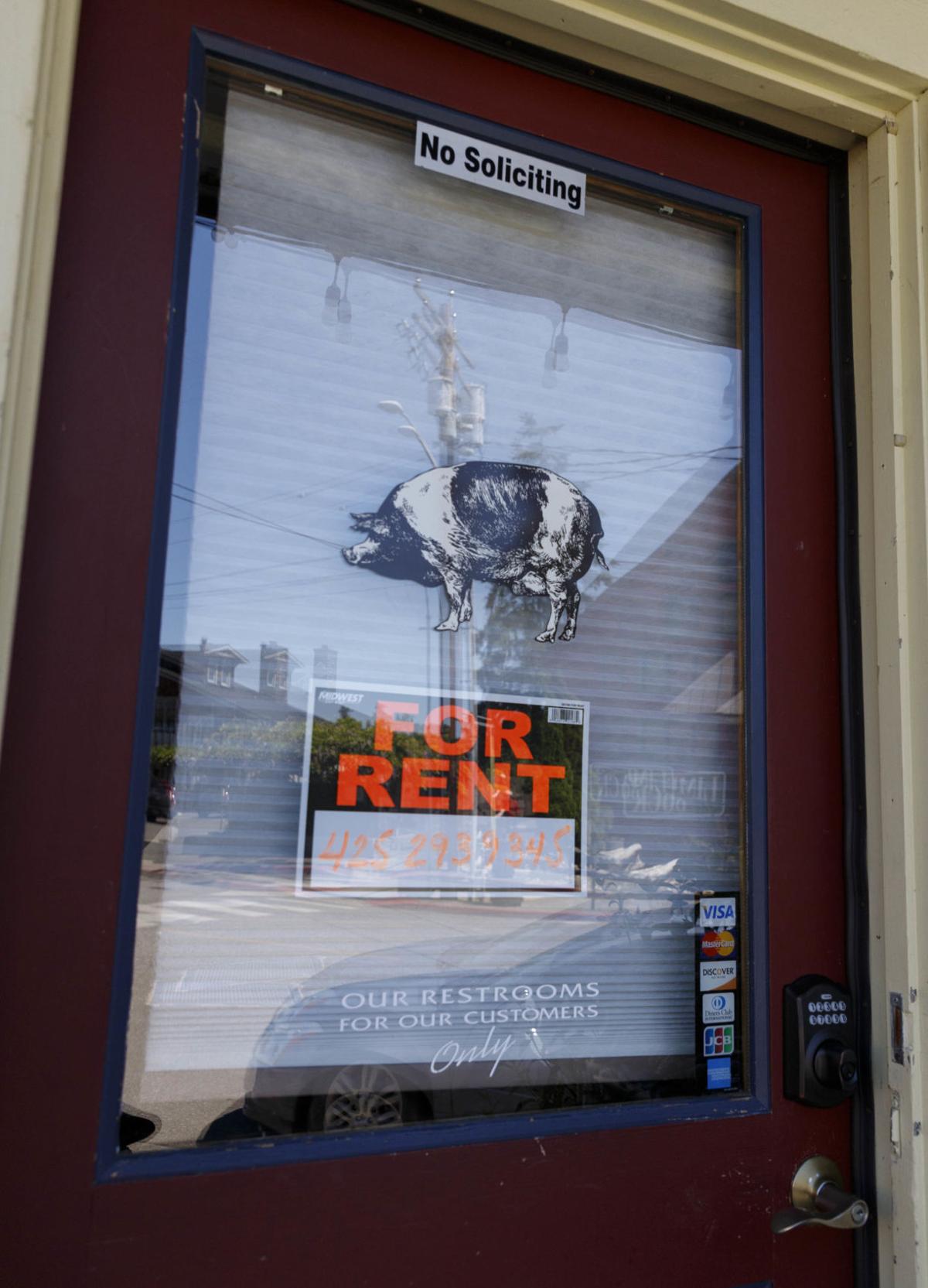 A “for rent” sign hangs in the door of the former location of {span}Whitey’s BBQ and Catering, which closed at the end of June.{/span}

Masked customers wait to go inside Cottons, a clothing store in La Conner, on Saturday afternoon. The store plans to close at the end of August due to challenges from COVID-19.

Jim Hemans, of Mukilteo, eats an ice cream cone outside La Conner Sweet Shoppe, which is closing, on Saturday.

Tia Kurtz, owner of Cottons in La Conner, helps a customer on Saturday. Kurtz said she is closing the store due to too many unknowns surrounding COVID-19 and many employees not feeling comfortable returning to work.

Many shops and businesses in La Conner were busy on Saturday.

A “for rent” sign hangs in the door of the former location of {span}Whitey’s BBQ and Catering, which closed at the end of June.{/span}

LA CONNER — Nine businesses in La Conner — including two restaurants, an art gallery, and multiple retail shops — have permanently closed or are closing, all but one citing COVID-19 as the reason for their closures.

Some businesses said they would never recover from the loss of Skagit Valley Tulip Festival revenue, which carries many through the year and slow winter months.

“Our landlord was nice enough to give us three months of free rent. That was great, but business never came back,” said Tim Mallory, who operated Whitey’s BBQ & Catering with wife Lisa for four years. “We had no money to pay rent, buy food or anything. There was nothing left to fall back on.”

The restaurant closed at the end of June.

Christina Jennings, president of the La Conner Chamber of Commerce and owner of Jennings Yarn and Needlecraft, said many closures occurred in June, even as businesses were allowed to reopen under Phase 2 of the governor’s four-phase Safe Start plan.

“It’s not like people magically showed up at the door with money in hand,” she said. “People still need to travel to La Conner. We survive on tourism. We’re not getting a lot of visitors from Canada or out of state.”

The pandemic has pushed other businesses into early retirement. La Conner Sweet Shoppe is closing, though owners Robyn and Steve Graves had hoped to run the store for a few more years.

At Cottons, a women’s clothing store, customers lined up Saturday to enter the store, which plans to close by the end of August, said owner Tia Kurtz.

“We’re closing because basically we have no choice,” Kurtz said. “I have employees who aren’t comfortable coming back to work. It’s an emotional decision ... I don’t see how I can continue going forward with all the unknowns.”

She said it may be challenging for clothing stores to survive as some customers are reluctant to try on clothes. She said a clothing shop doesn’t translate well to an online store.

Even as her business and many others close, Kurtz said she is confident the La Conner downtown will rebound.

“I’ve been here 30 years, and it’s had high and lows,” she said. “It’s the nature of a destination town. It’s ebb and flow in a town like this.”

La Conner Mayor Ramon Hayes said although any loss of business is devastating to the community, he is hopeful that the town will rebound.

“The bright spot is, once we are beyond this pandemic, I view La Conner as the future of retail,” he wrote in an email. “La Conner is an ultra-desirable destination town which offers unique products (typically don’t find them on Amazon).”

He said he remembered a total of 14 closures during the Great Recession, and the pandemic has brought particular challenges such as the complete shutdown of business and closure of the Canadian border.

The town of La Conner worked with two residents to create a new website, called shoplaconner.com, to showcase area businesses. Hayes said the La Conner Town Council has approved a second round of funding, using money from the CARES Act, to advertise the website.

Hayes said the downside is that there is no way to promote La Conner on a large scale at this time without encouraging gatherings and the spread of COVID-19. However, Hayes said business has been strong at his jewelry store Trumpeter Gallery since it reopened.

He said a number of other businesses are consolidating, making adjustments, and some are even planning expansions.

Indigo Stitch, a quilt shop, plans to permanently close its retail location and go all-online, said owner Sylvia Pippen. She said she doesn’t feel safe reopening the store for health reasons and is uncomfortable enforcing mask wearing, given how political the issue has become.

She said she has run an online store, called Sylvia Pippen Designs, for 18 years.

“If you’re going to go online, you have to sharpen what your products are; there has to be cohesion to them,” she said. “It takes a lot of time … It’s a lot of work, so it’s really like running another store.”

Another business, the LUX Art Center, has closed and plans to experiment with hosting events and staging them at other places, said owner Rebecca Strong. She said she could not continue to afford rent.

The pandemic has been worse for some businesses than others. For some stores, such as the Wood Merchant, a wood works gallery, sales are going strong, said owner Mark Carrier.

“As much as anything, we’re just very fortunate,” he said. “(Wood works) is kind of a specialty, and there aren’t other shops like it. It’s been here long enough that people remember it, and some come to La Conner primarily to come here.”

He said the business has purchased a building a few doors down and is planning a mixed media art gallery.

“We did about the same (sales) in June as we did last June,” said owner Marlo Frank. “We were actually shocked by that.”

Frank said she attributes the consistent business to people’s desires to refurnish their homes after having being stuck at home. However, it all depends on what kind of business you are, she said.

For Seeds Bistro & Bar, which closed at the end of June, moving to Phase 2 and sit-down dining led to a decrease in business because loyal takeout customers were less comfortable coming inside the restaurant or interacting with employees, said owner Kjendal Hicks.

She said even as the business has closed, she is stuck with a three-year lease on the building and a loan to pay off.

Hicks said one lesson to take away is to be understanding and supportive of each other during this time. She said while most customers were polite, some would argue with employees about rules limiting table size to five people, which is required during Phase 2. On the flip side, other customers would complain that tables were not spaced far enough apart.

She hopes people will try to focus on community and compassion.

“These small businesses are doing the best they can and trying to get the town and locals involved in helping them survive,” Hicks said.