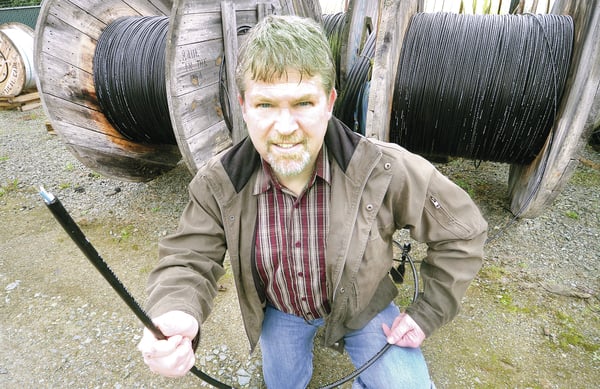 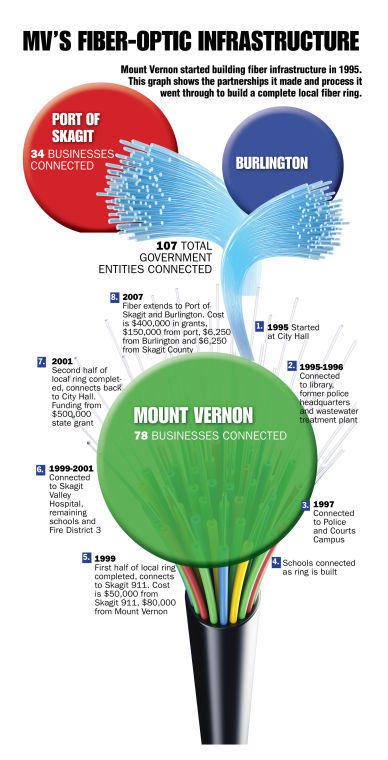 These tiny, barely visible strings are already benefiting local governments and companies and could provide an economic boom as communication and large data transfers become more essential for doing business.

In 1995, the city of Mount Vernon started hooking up government offices to its own fiber-optic cable to increase the efficiency of communications and save money on information services.

With the help of public-private and interlocal partnerships, grants and economic development funds, the fiber line has extended to 107 public entities and 112 businesses in Mount Vernon, Burlington and the county.

Mount Vernon information services director Kim Kleppe has been promoting municipal fiber use since 1995. Fiber, he said, allows for higher-end networking than old-school copper. It can provide faster speeds over longer distances.

“With fiber you can go across the ocean. It’s glass,” he said. “… You can push so much more information down fiber than you can copper.”

Thirty-seven businesses in Mount Vernon and at the Port of Skagit have hooked up to the fiber infrastructure so far in 2013, a big increase from the 10 new hookups in 2011.

The city manages the fiber, but contracts out to eight Internet service providers to manage the service and encourage competition in the marketplace. Businesses joining the network pay the city a one-time installation fee, which is usually about $1,000, Kleppe said.

Mount Vernon receives 15 percent of each Internet service provider’s gross income for the use of the infrastructure.

“What we do is provide the roads to allow businesses to get access to the fiber at competitive rates,” Kleppe said. “That allows us to be more viable for economic development.”

At this point, the city isn’t making or losing money through private partnerships, Kleppe said, but as more businesses join the existing network, the city expects to see its revenue pick up.

Access to ultra-fast Internet pushes the decision over the edge.

“The prospect of the fiber ring the city set up made us consider the location more than we would have otherwise,” Harmon said.

In its old location in Pioneer Square, the company had a maximum speed of 10 megabits per second using copper cables. It has access to 100 Mbps now, and it’s cheaper.

The company not only moves medical reports, but also makes medical images available. That takes a lot of bandwidth, said Dave Anderson, director of operations. Fiber has helped the company connect more providers, which is the goal of the service.

“It was a real treasure when we heard about it,” said Duncan West, director of business development for MIN-NS. “It solved a problem we were facing.”

In addition to providing access to its own government buildings, the city provides fiber access to Mount Vernon schools, Skagit Valley College and Skagit Valley Hospital. The school district and hospital have a maintenance agreement with the city — they don’t pay anything to use the infrastructure, but will help pay if something breaks.

The Port of Skagit and Burlington were connected to Mount Vernon’s fiber lines in 2007, using $400,000 in grants, $150,000 from a county economic development fund and $6,250 from both Burlington and Skagit County, said Carl Molesworth, communications director for the Port of Skagit.

As a way to support tenants and upgrade facilities, the port pays connection costs for businesses on port property.

Fiber’s improved ability to communicate and quickly transfer large amounts of data has been crucial for attracting and keeping the business of manufacturers and other high-tech businesses, Molesworth said.

Businesses at the port can shop and buy ongoing service from one of seven ISPs.

Burlington currently uses the fiber line for municipal departments and for smartly controlling infrastructure like traffic signals and sewer and stormwater lifts, but city administrator Bryan Harrison said he wants to use fiber to develop the city’s economy, and soon.

“We’re hoping that next year will be the first year to market it as a business opportunity,” he said.

Harrison said the question for his city is whether to develop the line internally and market it to businesses like a utility, or to have a private company manage and sell the service.

Sedro-Woolley is also investigating extending the fiber into its city because of the successes that Mount Vernon, Burlington and the port have seen, said city attorney Eron Berg. Sedro-Woolley’s No. 1 priority is to grow business and support economic development, he said, and if public fiber would help, the city would be interested.

Mount Vernon will consider increasing its fiber-optic structure internally to be prepared for the boom of businesses it sees coming. The city is also working on a possible Microsoft meeting space, where employees from the Surrey, B.C., and Bellevue locations could meet in the middle to work.

“We allow private businesses to use our roads,” Kleppe said. “We wanted to provide fiber to everyone. Can a city provide Internet and phone services? Yes, we can.”

What is a fiber-optic network?

Strong glass cables that can provide faster Internet speeds over longer distances than traditional copper cables. Operating costs are lower, and capacity can be expanded without having to lay more fiber.

Most cable infrastructure, which delivers Internet and phone services, use a fiber backbone to transmit information to homes and businesses, but the last bit that reaches into the buildings is composed of copper. A trend is growing across the nation to make the last piece fiber rather than copper, and Mount Vernon is in the forefront.