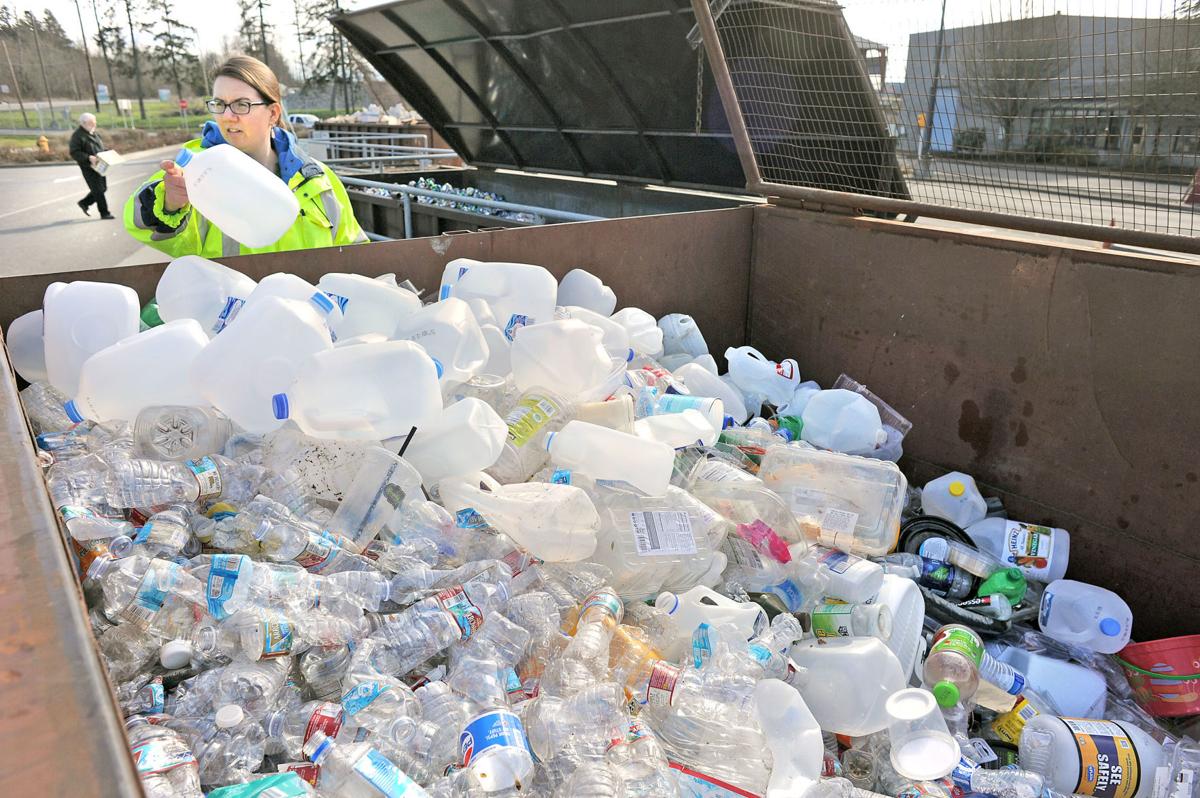 Skagit County Solid Waste Division Manager Margo Gillaspy looks March 21 at recyclable plastics — some of which are no longer accepted by China — left at the Skagit County transfer station near Bay View. 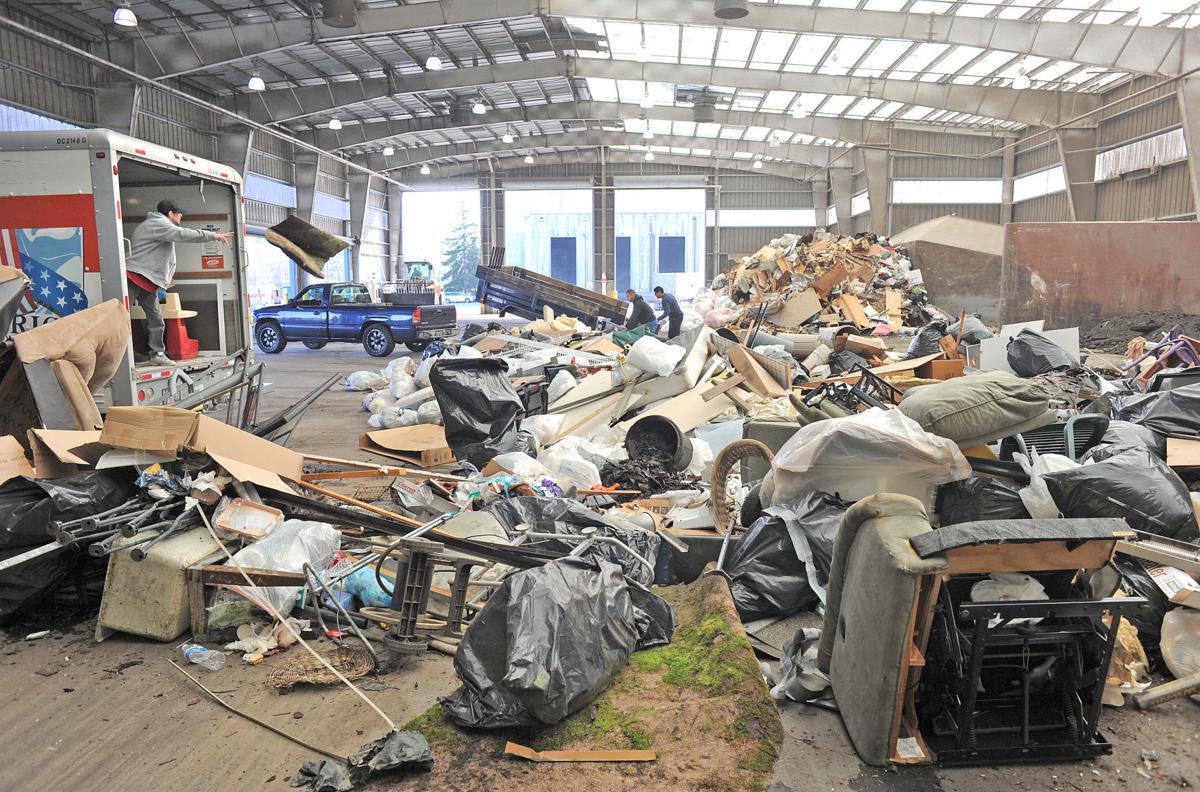 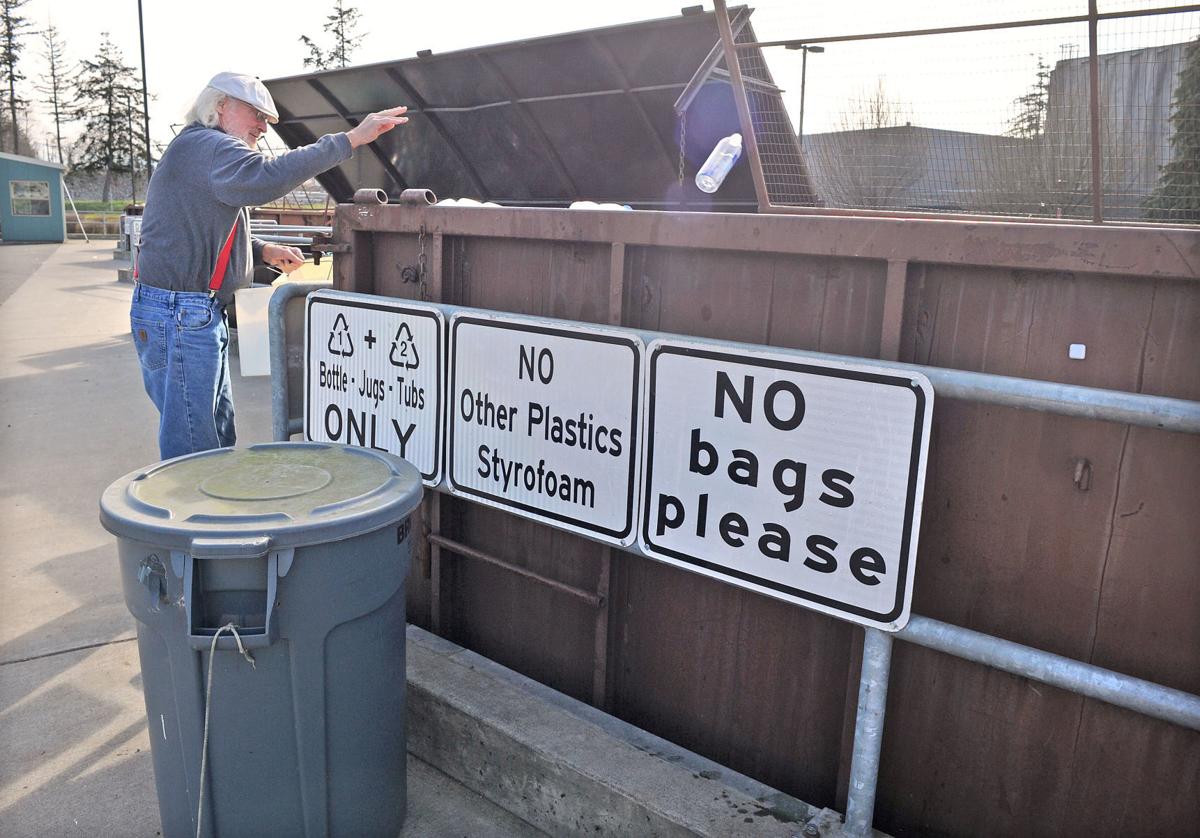 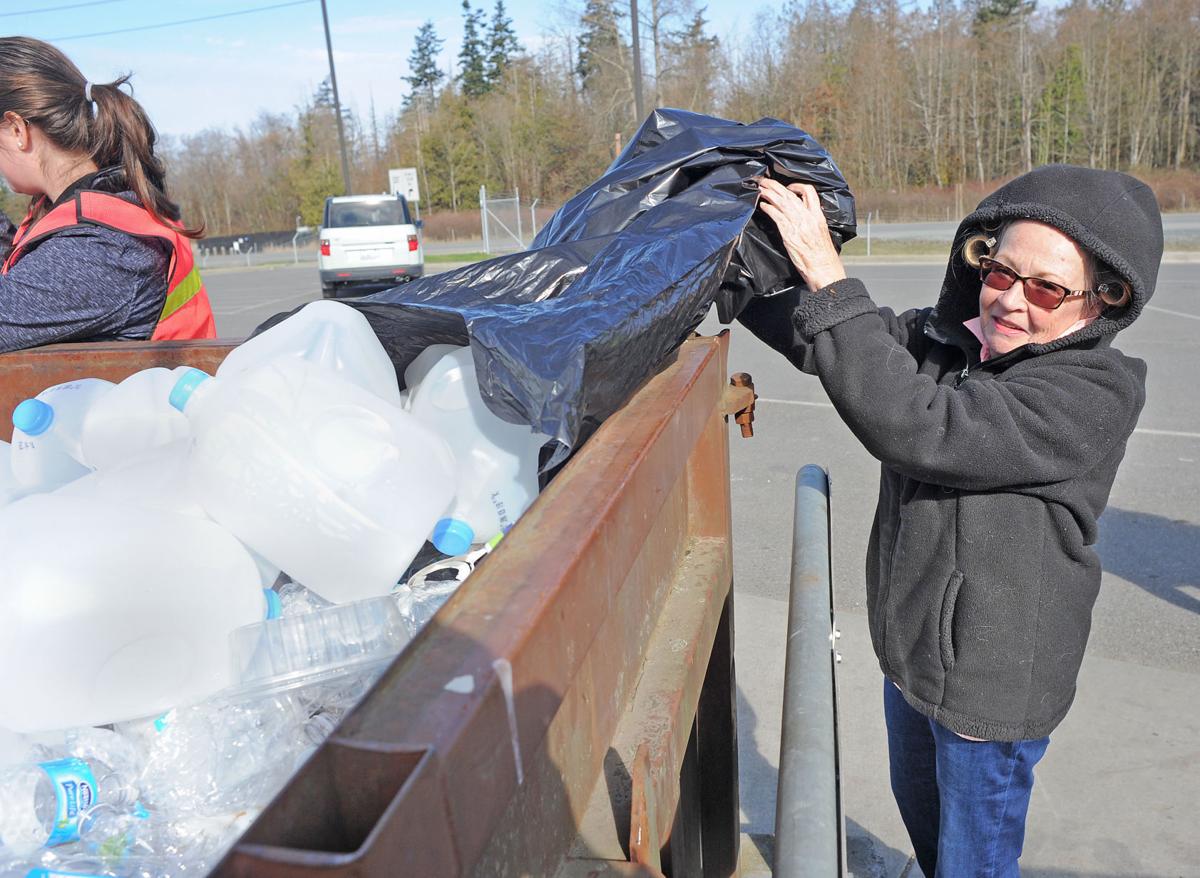 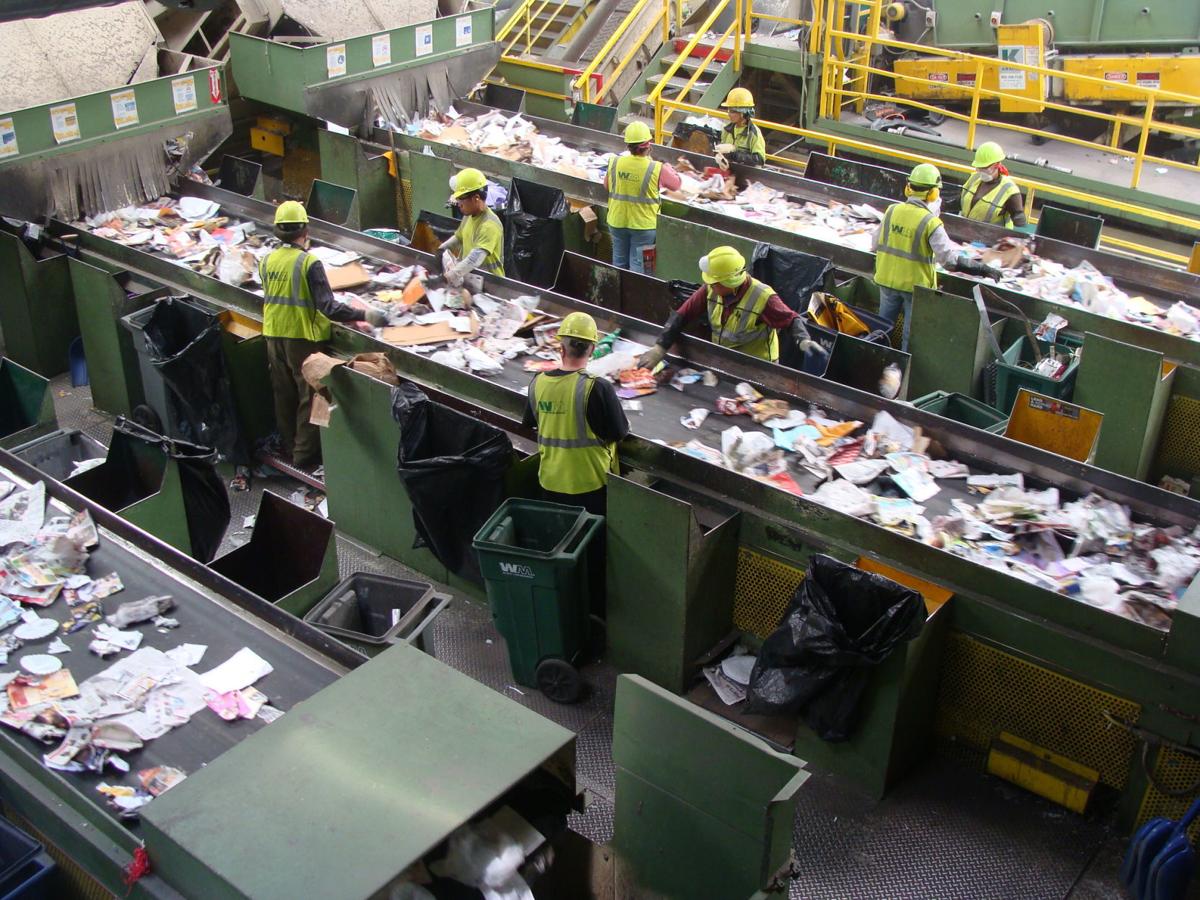 Some recycling from Skagit County is sorted by machinery and workers, including those pictured here at Waste Management's Cascade Recycling Center in Woodinville.

Skagit County Solid Waste Division Manager Margo Gillaspy looks March 21 at recyclable plastics — some of which are no longer accepted by China — left at the Skagit County transfer station near Bay View.

Some recycling from Skagit County is sorted by machinery and workers, including those pictured here at Waste Management's Cascade Recycling Center in Woodinville.

On any given day, Skagit County residents recycle a variety of plastic items, from yogurt containers emptied at breakfast to soda bottles drained for an afternoon pick-me-up.

For years, many of these items have made their way to China — the primary market for recyclables from throughout the United States, including Skagit County.

Now, with China banning the import of several types of recyclables — including some plastics, metals and fibers used for textiles — communities throughout the U.S. must either send such recyclables to more expensive recycling markets or to area landfills.

“This is the first time a policy change overseas has had such swift and direct impacts to recycling,” the Washington Refuse & Recycling Association said in a fact sheet about the ban.

The local impact of China’s ban is three-fold:

n The costs of recycling in the area is increasing and may be passed on to residents.

n The cleanliness of recyclables that are accepted is more strict.

China reported to the World Trade Organization that the ban, which took effect in January, is aimed at materials that are often accompanied by contamination such as food waste, chemicals or trash.

In Skagit County, recycling is handled by the county, cities and Waste Management, a private company.

Waste Management collects recyclables from residences in Anacortes, Burlington, Mount Vernon and some unincorporated areas, while Skagit County accepts recyclables dropped off at its transfer stations near Bay View, Sedro-Woolley and Rockport.

While Waste Management has found a new destination for plastics no longer accepted by China, Skagit County has not.

Forty-five percent of solid waste collected in Skagit County in 2013 was recycled, according to a state Department of Ecology recycling survey.

The effects of the ban extend beyond the county.

According to the Bureau of International Recycling, the ban “will have a serious impact on the global recycling industry.”

“It’s a regional and national issue, but it’s also very local,” Skagit County spokeswoman Bronlea Mishler said. “What can we do in Skagit County to keep recycling plastic?”

Destined for a landfill

Because of the ban, Washington is now among several states where some recyclables are being diverted into landfills instead of destined for re-use, according to Ecology.

“We’re hearing concerns from both local governments and recycling companies about difficulties they’re having in finding markets for recycled commodities, and we’ve heard reports about some types of recyclable material stacking up because they haven’t been able to find a buyer,” said Andrew Wineke, spokesman for Ecology’s Waste 2 Resources program.

So far the main impact of the ban in Skagit County has been on the recycling of plastics.

When recycled, plastics can be reshaped into new bottles, packaging, clothing, carpet and more, according to Ecology. But someone has to buy the plastics and create those new products. There has to be a market for the material.

Skagit County hasn’t found a new market for the plastics no longer accepted by China.

That means residents who value recycling, such as Jep Burdock of Guemes Island, aren’t able to keep some of their plastics out of landfills.

“My dad started recycling when I was like 10 years old and I’m 70 now,” Burdock said in March after tossing plastic bottles into a recycling container at the Skagit Transfer Station near Bay View.

Like many recycling companies, however, Skagit River Steel & Recycling is no longer accepting items banned by China.

“They don’t want our mixed plastics anymore, so we need to find another market for it,” Skagit County Solid Waste Division Manager Margo Gillaspy said.

Skagit County Solid Waste Division Outreach Specialist Callie Martin said that in response the county has shortened its list of which plastics it can accept for recycling to only bottles and jugs.

County officials said they plan for that to be a temporary situation while they look for new ways to recycle the plastics China will no longer accept.

“I have so much plastic on my desk it’s alarming,” Skagit County’s Mishler said while discussing the issue. “I don’t feel good when I have to throw plastic away. It’s something we know could and should be recycled.”

On average, 1,400 pounds of waste was recycled per person in Skagit County each year from 2009 to 2013, according to Ecology.

As plastics are added to the waste sent from Skagit County transfer stations to landfills, dumping costs could increase.

Meanwhile, the cost of recycling other materials is already increasing.

Gillaspy said when it comes to mixed paper, the county must now pay to dispose of it, whereas before the county would be compensated for providing the material to Skagit River Steel & Recycling.

While the county is still receiving compensation for cardboard, the rate per ton has decreased, she said.

Because of that overall increase in costs, residents could soon see an increase in recycling rates.

Mishler said the Skagit County Board of Commissioners will consider later this year whether to raise rates.

A consultant was hired in January to begin studying the county’s solid waste rates and help determine where changes are needed to keep the service sustainable.

Waste Management regional spokesman John Chelminiak said while the company has been able to find new markets for recyclables from Skagit County and throughout the state that are no longer accepted by China, those markets are more expensive.

That may lead to higher rates for Waste Management customers, he said.

What you can do

Because China will no longer take certain plastics, Skagit County officials said it’s important for residents to limit using plastics, make sure they’re up-to-date with what can be recycled and be sure to keep recyclables clean.

“If residents all across Skagit County chose one plastic item they are frequently using and swapped that out, it would make huge impacts,” Martin said. “Just bring your own coffee mug and actually walk into Starbucks.”

Plastics are a major pollution problem worldwide, with materials accumulating in the oceans and landfills.

Martin said items often used for just minutes — such as the lid and straw of a fast food beverage container — will impact the environment and wildlife for years.

County officials said it’s important for residents to know which plastics are recyclable where they live.

It’s a misconception that all plastics are recyclable. Items such as hangers, children’s toys and salad containers — which were among items dropped off at the Skagit Transfer Station in March — are not recyclable, Martin said.

And while plastic bags are recyclable, they aren’t accepted in curbside bins or at transfer stations. Martin said instead, they should be returned to grocery stores.

Not sure if an item is recyclable? Solid waste officials recommend residents contact the county or city in which they live to find out.

Otherwise, “When in doubt, throw it out” is the motto solid waste officials are asking residents to adopt.

For items that are recyclable, Martin said it’s important to make sure they’re clean. Lids and labels should also be removed and thrown away.

Which plastics are recyclable?

While Waste Management, which collects recycling from city and rural residents in much of the county, has not changed what it can accept in its curbside containers, Skagit County is currently limited in what it can accept at its transfer stations.

View the story on Goskagit.com for full lists of recyclable materials accepted by Waste Management and Skagit County, or visit their websites.